Learning That Wisdom Sits In Places: Apache Students Reconnecting To Land and Identity In Arizona, US 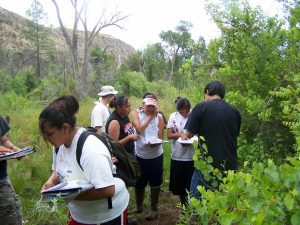 Over three decades ago years ago, nearly 300 places of cultural importance to the Apache people in the valleys surrounding Cibecue, Arizona were mapped and photographed by anthropologist Keith Basso with the help of Apache tribal elders. The results were published by Basso in 1996, in a book called Wisdom Sits in Places (Basso, 1996). Many years later, in 2005, several individuals* worked with students at the Cibecue Community School to initiate the project “Ndee bini’ bida’ilzaahi: Pictures of Apache Land” with multiple objectives. First, the project sought to teach youth in the community about traditional Apache values for the land by identifying Apache names of places and associated stories told by their ancestors that describe their historical, social and moral significance. A second aim was to combine traditional ecological knowledge with scientific methods to record and explain changes in the land. A third objective was to instill in the youth a personal relationship with the land that would encourage them to further their education and engage in restoration of their land and waters. Funding originally came through a number of different sources, including tribal funds, support from the Cibecue Community School, and contributions from US federal grants and in-kind contributions.

White Mountain Apache culture emphasizes the infusion of the physical world with mental and spiritual dimensions. The Apache language illustrates the inseparability of the two: for example, the root word ni’ can either refer to the “mind” or to “land.” Places within the landscape remind people how to live right (Basso, 1996), and people’s behaviours affect the conditions of the landscape. Water bodies hold exceptional significance, as nearly half of the place names in many regions of aboriginal Apache lands are associated with water bodies or wetland species (Grenville Goodwin Placenames Project, 1997, cited in Long, Tecle and Burnette, 2003). 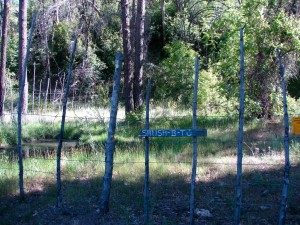 The largest fire in the history of the Southwest, the Rodeo-Chediski wildfire, struck Cibecue with a tremendous impact. The wildfire, while devastating ecologically and economically, provided the impetus to restore many springs and wetlands that were damaged. At the same time, leaders saw a need to better engage community members in restoration research and planning. The students visited 16 of the original sites that Basso’s team had surveyed, took photographs, and conducted an inventory of the plants, rocks, soils, and water. They also conducted interviews with their elders to better understand how the land has changed over this time period. They compiled their findings in a computer database, including the Apache names for plants, places, and other ecological features, and prepared posters, photo books, slideshows, articles, and videos to share their findings with members of their community and others on the Reservation. The students have worked on several spring restoration projects, and have also been involved with tribal staff in monitoring, evaluating, and developing plans for major wetland restoration projects. A continuing emphasis has been to document and guide recovery of areas damaged by wildfires. These efforts have expanded the reach of the post-wildfire response effort to better address impacts to important eco-cultural resources such as sacred springs and wetlands.

Project leaders believe that a strength of this project lies in building the students’ pride and appreciation for their land and water. While gathering data on soil, plants, water, geology, and locations, the students also learn why their ancestors held such respect for water and reverence for these sacred places. This learning is especially important since modern-day technology and lifestyle encourages loss of language and identity among young people in the community. By learning the Apache names for features of the land in their own backyard, they understand that Apache place names vividly describe the land, its values, its condition, and its significance to the community. 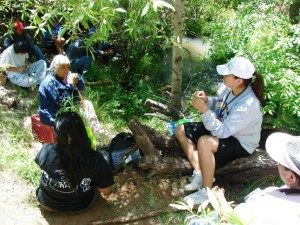 As the students listen, observe and study these places, they better understand the land from a scientific perspective as well from a traditional perspective. For instance, they learn about indicators such as the sounds made by springs. Cultural advisors interpret how the springs speak to them as signs of harmony or disharmony. The experience in assessing degraded sites helps the students to understand how excessive noise from running water can indicate accelerated erosion that is in effect calling out for treatment.

The program has directed restoration efforts to sites that were experiencing problems and provided documentation to support those efforts. Through interviews and direct participation, older community members have been providing information on changes that they have observed in their lifetimes and making recommendations as to what they think is important for the youth of the community to study. Many of the students are currently enrolled in college programs where they are continuing to study environmental science and management. The students have also demonstrated a greater willingness to speak in Apache and develop proficiency in the language. They understand the teachings of elders such as Nick Thompson, who said, “The names of all these places are good. They make you remember how to live right, so you want to replace yourself again” (quoted in Basso, 1996: 59). 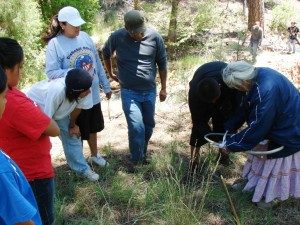 *Three people were instrumental in launching the project: Judy DeHose, Cibecue community member and President of the Cibecue School Board; Phil Endfield, Cibecue community member, a science teacher; and Jonathan Long, an ecologist who had worked with the Tribe for many years. In addition, Mae Burnette, a tribal member and cultural specialist who surveyed springs surrounding the community, has worked with the project in subsequent years.