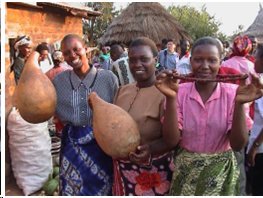 For the Kamba people in the Kitui District of Kenya, the bottle gourd (Lagenaria siceraria) and its estimated 50 landraces are part of a rich cultural history, having been cultivated for approximately 10,000 years. Known locally as kitete, this plant is central to the material culture of the region and has much symbolic and cultural value, as illustrated by the complex belief system that underpins the role of this species in Kamba culture. Diverse utilization was a driving force for the cultivation of so many landraces, with a total of 61 different major uses documented so far by the project “Community-Based Documentation of Indigenous Knowledge, Awareness and Conservation of Cultural and Genetic Diversity of Bottle Gourd (Lagenaria siceraria) in Kitui District in Kenya”. Some of the uses include: kitete as food—some landraces are edible, typically eaten in sauces, or boiled or fried; and kitete as calabashes—the hollowed-out shells have traditionally been used as containers to hold water, honey, milk and perfume, to name but a few. The shells have also been used for many other purposes: beehives, washbasins, animal traps, musical instruments and masks. The beautifully decorated bottle gourd is also a popular item for souvenirs and sold in tourist markets in cities such as Nairobi.

Recently, however, these multiple uses and the value of kitete have been greatly undermined by the use of plastic containers. This is resulting in an erosion of local knowledge and cultural practices surrounding this species, which is threatening it with extinction. The Kamba culture is intricately intertwined with the kitete landraces, and therefore loss of the knowledge of kitete threatens the associated local culture, customs and identity and will have a far-reaching impact on the community.

In 2001, the Kyanika Adult Women’s Group (KAWG), a local women’s group, in partnership with Bioversity International (IPGRI) and the National Museums of Kenya, initiated a two-year project aimed at conserving kitete diversity and culture. Other objectives are to generate additional income through promoting uses of kitete, consolidating access to kitete landraces and retaining the indigenous knowledge of kitete within the local communities. During the project, nearly 200 gourd landraces were collected and taken for cataloguing and for propagation in community fields, to produce seed for distribution and exchange. The project teams also gathered information through interviews, and songs and stories were recorded on cassette and documented in a national database in the community’s own language. Kitete landraces are also described in the local language, using approximately 70 different names. The group established a kitete community museum within the village, which displays various types of gourd landraces. The museum also serves as a centre that distributes and stores seeds, and acts as an education centre to provide information for school children and other visitors. In addition, the group has shared information and their experience with other groups in the district through seed fairs, knowledge competitions, and joint planting activities, as well as internationally by attending workshops and symposiums. Farmers are provided with the means to document their knowledge on a specific topic on audio tape or other media, in their own language, which can then be used in scientific journals or in a national database. This approach is meant to empower the knowledge holders and to recognize their contribution concerning the validity of traditional knowledge systems at the national and scientific level, while ensuring that knowledge holders’ rights are recognized.

Some challenges encountered during the project concern the sharing of biodiversity-related knowledge. Sharing knowledge is possible only as long as the people are comfortable with making that information public. When knowledge is specialized within the community and a select group of knowledge holders claim monopoly over or sole rights to the knowledge, information may be guarded. Knowledge may also be withheld when there is economic value at stake, as is the case with some medicinal plants. Another challenge was the management of the documented information, which required advanced editing and archiving skills that were lacking within the group.

The benefits of the project have been wide-ranging. The KAWG women’s group now sells seeds, fruits, products such as decorated fruits, necklaces, bowls and other containers and T-shirts, which have significantly increased local income. Marketing bottle gourd products for cash is seen as an incentive to maintain and keep the crop and its diversity. Products are being ordered from local and international entrepreneurs. Incorporating bottle gourd activities in cultural events such as community festivals also helps maintain the crop diversity and related knowledge. The community’s motivation for safeguarding the diversity of gourd landraces has increased and most group members now grow edible gourds, improving nutrition. The project has improved harmony among members and facilitated many neighbouring communities who wanted to form their own groups.

In 2004, the government noted the success of the project and awarded KAWG a small piece of land to establish a new community centre and shop as well as a trophy for the best community-based income-generating project in the country. Despite the fact that the project concept – conservation of traditional crop diversity for community development – has not yet been widely recognized within the local and national government policies, the project’s activities are becoming better known. The project has been picked up several times by the local newspapers and awareness of the issues is spreading to other areas and countries. Other communities and countries are now applying the method and approach used for kitete to different crops.

The chairperson of the women’s group, Mrs. Jemima Kimoni, stated: ‘The experience and exposure the community went through is probably the most important thing that happened to the group members and probably the longest lasting motivation in their individual minds.’ She added that it has also ‘helped to empower individuals and build stronger links as well as created awareness within the group and community.’