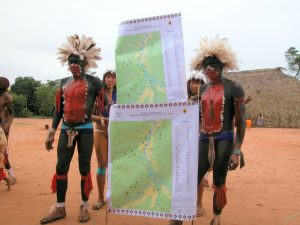 The concept of “National Park” in Brazil incorporates the dual objectives of protecting the environment and the indigenous populations living within its boundaries. Parks are administered by the National Indian Foundation (known in Brazil as FUNAI) and the Brazilian government’s environmental agency. The Xingu Indigenous Park, a 6.5-million acre area of tropical forests and savannah in central Brazil, is inhabited by the Xingu peoples, a coalition of fourteen Indigenous groups totalling over four thousand individuals. The park was created in 1961 by the government of Brazil to mitigate the degree to which its isolated communities would be disturbed or destroyed by colonizing forces. In the 1980s, however, hunters, and fishers started invading the territory of the Xingu Indigenous Park.

A booming agricultural industry and the encroachment of cattle ranching in the region, along with a lack of federal resources to adequately enforce the park’s boundaries, created a situation that put mounting pressures on the integrity of the reserve and the communities within it. By the end of the 1990s, forest fires on cattle ranches located to the northeast of the Park and the advance of forestry operations to the west also threatened to affect the Park. Further, the occupation of the area around the Park began to pollute the headwaters of the rivers that supply water to the Park.

Due to these pressures, there has been an ever-increasing perception among the Indigenous inhabitants of the Park that they are in an uncomfortable “embrace,” surrounded by a process of occupation, and that the Park is a shrinking “island” of forest in the midst of pasture and intensive agriculture. With a growth rate of around three percent per year, the population has nowhere to expand. Therefore, life in the villages follows a progressively sedentary pattern, in contrast to traditional semi-nomadism. Activities that surround the Park are preventing the flow of sources of animal protein (game animals) into the Park, so the availability of natural resources is becoming increasingly scarce.

Another challenge to the people in the Xingu Indigenous Park is rooted in the history of the formation of an internally diversified Indigenous Area – both from a socio-cultural and an ecological perspective. Several indigenous societies have had to coexist in a situation of geographical confinement. Further, new indigenous organizations (largely the Indigenous Land Association of the Xingu, known in Portuguese as ATIX) have been established as a means for dialogue with the national society and to encourage projects in education, economic alternatives and protection of the territory. These organizations are using an administrative structure that does not exist in the traditional political structures of the indigenous societies, and that presupposes command of the Portuguese language, basic mathematics, legislation and inter-institutional relations. Younger individuals are the ones who dominate the new knowledge that is indispensable at this interface. This generates conflict with traditional village politics, which is generally controlled by elders. Thus, an indigenous association does not always succeed in reconciling the traditional politics with the political administration of the national society.

Since 1996, the Xingu peoples have been working together with the Amazon Conservation Team (ACT) toward the goals of abating illegal incursions into the Park and establishing a culturally appropriate management scheme, called a “life plan,” for the Park and its inhabitants. The project, “Territorial Management in Brazil’s Xingu Indigenous Park,” developed maps of traditional territories, sacred sites, fishing and hunting locales, and other salient features of the landscape to drive the conservation of biodiversity in the Park. Initial activities involved biocultural mapping for Kamayurá indigenous ancestral lands, upon the direct invitation of the tribe. ACT equipped the Indigenous researchers with handheld GPS units and provided training in ethnographic map composition, while western-trained cartographers assisted with the technical map assembly. In 2002, ACT and its Indigenous partners completed maps of the Kamayurá and Yawalapiti areas of the Xingu Indigenous Park, covering 1,250,000 acres. In the process, ACT worked in collaboration with FUNAI and with the Pilot Program to Preserve the Brazilian Rainforest. The maps were released in a three-day ceremony in the Xingu. Since then, ACT and its Indigenous partners completed the collaborative mapping process for the entire Xingu Indigenous Park, an area of over seven million acres of savannah and lowland tropical rainforest.

The process of ethnographic mapping in the Indigenous Park and the construction of management plans based on these maps have brought a significant degree of focus and attention on the knowledge of older generations. As well, the incorporation of technological devices like GPS units and mapping equipment has intrigued the younger generation. Thus, these various elements of the project have united people across generations and inspired new admiration and respect for elders and their knowledge. This mapping project also brought together the 14 tribes of the Xingu, representing the first time they ever worked together to complete a single project. “This is truly the first effort in the history of our territories that has united our fourteen tribes toward a common end, and these are the first maps to be published in our native languages,” commented Tunuly, a Yawalapiti tribe member.

The project has found that processes that occur outside the Park directly affect what happens inside the Park. Therefore, the sustainability of the Park depends on developing ways of doing politics outside the Park, identifying possible allies and seeking to sensitize the relevant public agencies and the public in general to what is happening in the region of the Xingu, having to do with defending both the indigenous population and the biodiversity of the Amazon forest. Also importantly, in 2007 ACT concluded that the leading indigenous organizations of the Xingu Indigenous Park were able to manage their own land and cultural conservation efforts, and passed on the assets of its regional field office in Canarana to the associations of the Waurá and Ikpeng. ACT now serves in an advisory capacity for indigenous associations of the Xingu seeking assistance in conservation and sustainable development planning and implementation.