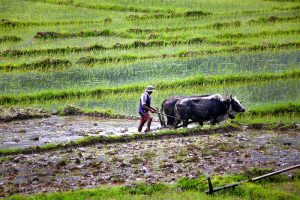 Nepalese “rice culture” has provided important options to address the needs of ecosystems and local communities together, particularly in areas that are diverse, complex and resource poor. The cultivation of diverse landraces of rice has advantages over “improved” rice varieties, both ecologically and culturally. Despite greater economic value of improved varieties, landraces are considered to have both symbolic and adaptive values. Farmers’ selection of rice varieties that have been discouraged by scientists, for example, and their distaste for imported varieties, clearly show the strength of farmers’ knowledge connected to social and ecological factors. The exchange of knowledge and traditions associated with landraces has important implications for the maintenance of the link between culture and food and thus for food security.

The study “Linking Crop Diversity with Food Traditions and Food Security in the Hills of Nepal”, based at the Norwegian University of Life Sciences, in Norway, focused on subsistence farmers in the hills of Nepal, who have extensive knowledge associated with crop landraces and food traditions. The study suggests that the traditional practices of using local crop varieties in festivals and life-cycle rituals help maintain agricultural biodiversity, since specific crop landraces are preferred in traditional foods consumed during major celebrations. For example, selroti, a ring-like bread prepared from Gurdi and Madishe landraces of rice, is essential in major festivals, such as Dashain and Tihar, and important life cycle rituals, such as Bartabandha and Bibaha. Bread prepared from any other variety of rice would not be as desirable and might even be regarded as religiously impure. Project influence extends to policy guidelines on tourism training centres and menu development for hotels to use and promote traditional foods.

All project information was generated in the local language, using participatory learning tools, and later translated into English. However, the project’s view was that language revitalization in and of itself is not a panacea for maintaining transmission of knowledge and practices. The maintenance of traditional landraces is critically dependent on the belief system and traditional practices continuing to be a part of the socio-cultural system. This is how agricultural biodiversity conservation is possible in culturally rich agroecosystems. As project contributors point out, ‘neither of the two goals, conserving biodiversity and sustaining cultural diversity is attainable in isolation.’