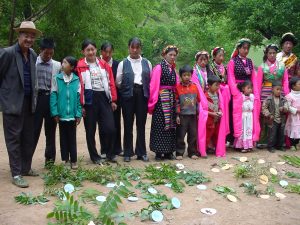 Within one hour, Tibetan villagers in northwest Yunnan collected more than 80 local species, which have been traditionally used for generations and are classified according to their own epistemology and knowledge systems Credit: Xu Jianchu

The opening up and success of economic reforms in recent decades in China have produced high and sustained economic growth rates and lifted millions of people out of poverty. Concurrent political reforms have decentralized many decision-making processes and created new democratic institutions, especially in rural areas. These changes, however, have placed additional stress on natural resources and on the livelihoods of indigenous communities in politically and economically peripheral areas. Increasing public awareness of deforestation and its links to soil erosion, loss of biodiversity, floods and other forms of environmental degradation has made protection of forest ecosystems a central government priority. Conflicts have emerged between decentralization for enhancing local livelihoods, and environmental protection for the benefit of larger-scale populations.

The success of economic reform and a relaxed political environment have acted to strengthen cultural identity and generate a revival of indigenous knowledge of particular traditional spiritual practices. However, a significant consequence of the changing economic context is the loss of inter-generational transfer of this knowledge related to conservation beliefs and practices. In Southwest China, the key challenge now is how to strengthen local (both informal and formal) institutions that can support and enhance indigenous knowledge, innovations and practices of the local cultural communities in relation to environmental and socio-economic changes.

The Yunnan Initiative, which resulted from the 2000 Cultures and Biodiversity Congress (CUBIC 2000), calls attention to the uncertainties that local and indigenous peoples face in their quest to use, nurture and sustain the ecosystems in which they live and on which they depend. The Yunnan Initiative articulated the principles and strategies for cultural and ecological conservation as well as sustainable economic development applicable to places that are culturally and biologically diverse. The initiative is based on the Code of Ethics of the International Society of Ethnobiology (http://ise.arts.ubc.ca/global_coalition/ethics.php) and endorses the CBD’s call for respect of cultural and spiritual values for sustainable development. The CUBIC 2000 concluded that partnerships between local groups and government, nongovernmental organizations, and the business sector must be based on participatory processes and intercultural dialogue and institutional development, and aim for an interaction between local knowledge and aspects of Western knowledge for an equitable and sustainable stream of benefits.

The project “Support of Indigenous Knowledge for the Use and Conservation of Biological Diversity of Ethnic Minorities in Three Ecological Regions in Yunnan, Southwest China”, completed in 2006, was based in three regions of Yunnan Province in Southwest China and supported by the German international technical cooperation agency GTZ (Gesellschaft für Technische Zusammenarbeit). The project followed the principles of the Yunnan Initiative: “We fully realize that there are intricate and close links between biodiversity and cultural diversity in Yunnan; therefore we advocate in situ biological diversity conservation within peoples’ indigenous cultural and ecological systems.” (The Yunnan Initiative, 2000). The project promoted indigenous knowledge for livelihoods and aimed to strengthen local institutions to use indigenous knowledge for the conservation and sustainable use of biodiversity. It was a cooperative project between Chinese and international organizations that served as intermediaries and strategic partners in the pilot areas. It also included representatives of ethnic minorities as well as forest and nature conservation agencies. The project emphasized the interlinkages between sustainable biodiversity management and poverty alleviation in Yunnan, covering tropical rainforest, sub-tropical broadleaf forest, and alpine ecosystems.

Challenges during project implementation were due to commercialization and the market economy. These changes have deeply affected traditional knowledge related to the use of biological resources for medicine, food and shelters, land-use practices and customary institutions for governing access to natural resources. They have also created a divide between the older and younger generations in indigenous communities, due to the younger people working off-farm and moving to the cities. This has caused a rapid and often coerced removal of indigenous peoples from their once close dependence upon and rights to their immediate environment for their livelihoods. Further, indigenous knowledge is not sufficiently taken into account in the design and implementation of conservation and development schemes in which the government is involved. This failure is often explained in terms of government officials and resource managers privileging scientific knowledge over local knowledge. However, it may be that the conflict is rather between local versus “outside” objectives. The role of indigenous knowledge is sidelined because local people’s objectives are ignored. The knowledge, skills, interest, and patience to regulate at the local level are absent in the State.

Despite the fact that local users have the highly developed knowledge to manage their own resources, policies and regulations are made to favour the objectives and interests of the State. By privileging these objectives, local objectives, such as subsistence and resource-based commerce – the space in which indigenous knowledge can be exercised – are limited and indigenous knowledge is marginalized. Ultimately, local people have little control over their resources when these same resources are of value to higher-level elites and the State. An emancipatory approach to local development liberates people by creating a space of local discretionary power in which people can make decisions on their own behalf. Representation is a mechanism to bring forward the needs and aspirations as well of the knowledge of local communities. In addition, local authorities must have discretionary powers over resources and decisions of significance to local people.

The main success of this project is community-driven participatory action research. The project provided methodological training and advisory services to local project staff, representatives of ethnic minorities, resource managers and other resource persons. Traditional knowledge and different land-use practices were documented on collectively developed local maps. These maps support local communities in formulating strategies for better management of natural resources according to their own needs and objectives. A longer-term success of the project has been networking. To ensure that knowledge is transferred, local and regional networks are being established. The exchange of experiences among the pilot areas and other villages is facilitated through, for instance, local seed fairs, cross-farm visits and study tours. This contributes to the institutionalization of dialogue among different actors such as experts in indigenous knowledge and scientists.