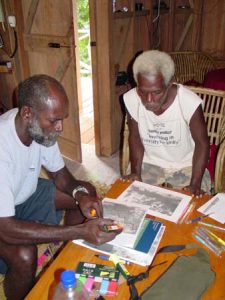 Protected areas presently cover less than 0.5% of the land and seascapes of the Solomon Islands. In part, this is because Solomon Islands legislation lacks specific and appropriate provisions for creating protected areas, but the creation of protected areas is also complicated by patterns of land tenure. Land use is determined by holders of customary rights to the land, namely individuals within local communities. Overall, there are well over 30 marine protected/conservation areas in the Solomon Islands, managed by NGOs and community-based organizations, as well as by the government’s Environment and Conservation Division. To date, more than 40 other sites have been identified and recommended as potential marine conservation areas, deemed to be of high marine biodiversity significance (Supporting Country Action on the CBD Programme of Work on Protected Areas).

The program called the “Western Solomons Conservation Program” (WSCP) works in tandem with the Roviana Conservation Foundation (RCF), which is a local community based organization established with the assistance of WCSP in the Roviana and Vona Vona Lagoons, Solomon Islands. The project “Establishing Marine Protected Areas and Spatio-temporal Refugia” is located in the Western Province of the Solomon Islands, and is a collaborative effort by researchers from the USA and customary landowners. Its central objective has been to create a network of Community-Based Marine Protected Areas (CBMPAs) to conserve marine and riparian habitats in various areas of the Western lagoons in the Solomon Islands.

The protected areas strategy is based on an amalgamation between customary management and modern conservation methods. More specifically, the CBMPA sites were selected through various research strategies, including (1) an ethnographic study of regional customary sea tenure to assess, among other factors, the feasibility of implementing fisheries management in the area; (2) the incorporation of the visual assessments of local photo interpreters, who identified benthic habitats, resident taxa, and spatio-temporal events of biological significance, into a geographical information system (GIS) database; (3) the coupling of indigenous ecological knowledge with marine science to study aspects of life history characteristics of vulnerable species; and (4) the incorporation of fishing time-series data (1994–2004) into the GIS to examine spatial and temporal patterns of human fishing effort and yields. The use of customary land and sea tenure systems, which are traditional structures that set the rules for resource access using customary management practices, has reinvigorated traditional authority over peoples’ marine resources, and has generated innovative governance institutions, which are being articulated with customary and statutory law.

The Roviana, Vona Vona and Marovo Lagoons and adjoining coastal zones encompass a variety of critical, biodiversity-rich habitats and species in the region and include shallow coral reefs, outer coral reef drops, grass beds, freshwater swamps, river estuaries, mangrove, coastal strand vegetation, and lowland rain forests. The network currently includes 26 CBMPAs, with another four established autonomously but under the auspices of this program. In addition, the program has contributed to awareness raising, delivered environmental education, established the institutional infrastructure to sustain the CBMPAs, and participatory development to assist in protection of other sites on other islands where resource management is more challenging. The project is also working to legalize all protected areas at the provincial and national levels and to conduct baseline marine and social science research in the areas, as well as running field training programs for Pacific Island students. An environmental dictionary in the Roviana vernacular describes all marine and terrestrial organisms known locally. Local confidence in the program derives partly from the fact that it is a co-management arrangement and that it includes customary authority and practices. It therefore represents an extension and revitalization of traditional tenure practices, which people can relate to and articulate in the local cultural idiom.

In consolidating the CBMPA network, the WSCP and RCF are: (1) amalgamating traditional leadership, religious moral authority, and governmental legal support for region-wide control and supervisor of MPA sites; (2) enlarging, expanding, and consolidating the MPA network; (3) working towards implementing the first comprehensive plan for eco-regional marine biodiversity conservation and fisheries management (related to food security) in the Solomons; (4) providing technical assistance and training in MPA monitoring locally; (5) contributing innovative marine and social science research concerning the ecological and social effects of MPAs managed under customary and church-based governance; (6) fostering MPA environmental education at the local, national, and international levels; (7) evaluating the socio-ecological impacts of the 2007 tsunami and providing information useful for future plans to attenuate the impacts of natural disasters in this region; (8) gazetting all MPAs and other regional coastal co-management plans; and (9) working to establish a comprehensive set of guidelines for implementing marine conservation initiatives in this region.

Currently, an increasing number of communities across the Western Solomons are requesting the program’s assistance in establishing both land-based and sea-based conservation programs. In addition, one of the largest and most powerful church denominations in the region, the Couples for Christ (CFC) has asked the program to establish a Ministry of Environment branch within the church, which would institute ecosystem-based management plans in each CFC village and would supervise the conservation and resource management activities of each participant community. This is an unusual opportunity to achieve successful eco-regional marine and terrestrial biodiversity conservation.

A number of conservation programs in the Western Solomons have failed due to a fundamental misunderstanding of local peoples’ aspirations and the socio-cultural context in which the conservation program was being implemented. In this regard, the WSCP and RCF have succeeded in understanding the local culture (for instance, tenurial rights) and in working with local communities as equal partners to establish conservation programs while assisting the communities in managing their resources. As Western Solomons people talk about this program’s success, more and more communities are asking for assistance in implementing their own conservation programs. The program leaders believe that this is a momentous opportunity to protect marine biodiversity while also supporting the traditional beliefs and cultures of the peoples’ of the Western Pacific.