Life with Crocodiles: Reintroducing Human-Wildlife Coexistence in the Philippines 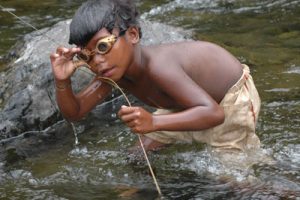 The Northern Sierra Madre on the island of Luzon, Philippines, is one of the most ecologically valuable areas in the world. The area is also under severe threat from logging, destructive fishing, agricultural conversion, infrastructure development and hunting, all of which threaten biodiversity in the last forest frontier on Luzon. Rural communities depend heavily on ecosystem functions and forest products. One of the most severely threatened species in the region is the Philippine crocodile (Crocodylus mindorensis), now critically endangered throughout the Philippines. Over-hunting of crocodiles for the leather industry, large-scale habitat destruction (including wetland drainage and conversion to irrigated rice—a predominant crop with the “green revolution”), and the introduction and widespread use of destructive fishing methods (dynamite, better nets, electro-fishing), all have contributed to this species’ drastic decline (Weerd and Ploeg, 2004).

Another important contributing factor has been the loss of indigenous peoples’ traditions and understanding of the species, including ancestral beliefs that once maintained crocodile populations. Local people, particularly fishers, traditionally were knowledgeable about the behaviour and ecology of the crocodile and its habitat (wetland ecosystems). Fishers’ knowledge was generally based on opportunistic observations over a long period of time and was passed down across generations through stories and myths. Traditional beliefs and practices included strong taboos against killing and eating crocodiles. For example, in the past, the indigenous Kalinga communities in the remote area of the municipality of San Mariano in the Sierra Madre mountain range would not kill crocodiles because they believed the crocodile would take revenge through powerful spirits. People would make offerings to crocodiles in religious ceremonies or before crossing rivers, showing the veneration local communities had for crocodiles.

Over the past fifty years, however, tremendous changes have occurred in the livelihoods, education and culture of local people, as well as in their environment, leading to the loss of many of these traditions. Economic circumstances, massive immigration into the region, the expansion of the State, “modernization” and acculturation into mainstream Filipino society—including modern education that teaches little or nothing about the local environment—all have eroded traditional forms of knowledge about biodiversity. In addition, the degradation of the local environment poses severe threats to sustaining local knowledge about biodiversity, as traditional certainties about the environment are rapidly changing. Knowledge no longer has the same meaning or function in this changing social and natural environment. Further, the behaviour of immigrants sometimes appears to belie traditional knowledge. During the logging boom in the 1970s, immigrants killed crocodiles out of fear and hunters killed them for commercial purposes. Since the local Kalinga people saw no revenge from the spirits, they began to change their worldview. In turn, the decline in crocodile populations has furthered the loss of the related traditions. Diminished familiarity with this species engenders fear of the crocodile and increases the likelihood that the animal will be killed from lack of local knowledge—a clear example of the link between cultural beliefs and practices and species conservation.

The project “Crocodile Rehabilitation, Observance and Conservation” is led by the MABUWAYA Foundation, a Philippine NGO established in 2003, whose name is a combination of the two Tagalog words Mabuhay (= long live) and Buwaya (= crocodile). This project is funded by the BP Conservation Leadership Program, the Critical Ecosystem Partnership Fund, and the Netherlands Committee for IUCN. It links indigenous and local governments and the international conservation movement through the development of a community-based conservation strategy in partnership with the Agta and Kalinga peoples in San Mariano. The project is assisting the indigenous communities in obtaining land rights, while seeking to conserve the small and fragmented crocodile population that remains in the area. Traditional practices that were beneficial for crocodile conservation are revived and the traditional knowledge on the behaviour and ecology of the Philippine crocodile is documented. The project thus promotes past traditional practices in a contemporary context, and enshrines these cultural traditions in law.

The project also promotes scientific research on the ecology of the crocodile. Graduate students from Isabela State University (Philippines) and Leiden University (The Netherlands) conduct fieldwork in San Mariano. The MABUWAYA project also supports a public awareness campaign, with all communication material produced in the local languages, Tagalog and Ilocano. The project aims to instil a sense of pride in the presence of the Philippine crocodile and in the related cultural traditions, thus making a crucial link between species conservation and the culture and identity of the people (Ploeg, Cureg, and Weerd, 2008). The Local Government Unit (LGU) of San Mariano has become an active partner in crocodile conservation. It has declared the Philippine crocodile the flagship species of the municipality, enacted local ordinances that protect the crocodiles and established the very first Philippine crocodile sanctuary of the country, covering one of the breeding areas (Ploeg and Weerd, 2004). Three crocodile sanctuaries and eleven fish sanctuaries have now been declared and delineated. The sanctuaries are co-managed by local communities. The conservation program is intended to be entirely community-based: without their full local consent, the LGU of San Mariano cannot declare any sanctuaries (see http://www.cvped.org/croc.php).

The main challenges to this ongoing project are poverty and weak governance. A small conservation project can do little to alleviate poverty among 40,000 people, who earn less than US $2/day. It is necessary to empower village councils to actively enforce environmental legislation that protects wetland resources on which the community depends. The Philippine crocodile remains critically endangered, and finding structural funding for conservation is a major issue. Livelihoods and incomes are not improving in San Mariano despite fundamental changes in the landscape: mining and biofuel plantations are new developments in the area with potential harmful effects on people, wetlands and crocodiles. Civil insurgency is another problem in the area. Maoist insurgents and the army are fighting for control of areas where the project is working and communities are often caught in the conflict.

Despite these challenges, there is some degree of success currently, marked by the number of crocodiles, which now stands at 70. There were four new crocodile nests in 2008 alone, showing good recovery in the wild. The project is optimistic in that with four more years there will be more than 100 non-hatchling crocodiles surviving in the wild in the northern Sierra Madre. The crocodile sanctuaries also strengthen socio-economic development. There is growing societal support to stop the use of destructive fishing methods (in San Mariano people fished with dynamite, electricity and pesticides). Enforcing environmental legislation helps communities to fish in a more sustainable way and crocodiles are no longer purposely killed. The Philippine crocodile has become the flagship of local environmental stewardship.