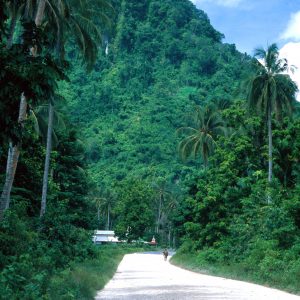 Lihir Island, Papua New Guinea (PNG) is a site for gold mining by a large multinational company — Lihir Gold Limited (LGL), which is projected to be operating for thirty-five years. The mining involves open pit extraction with deep-sea tailings disposal — a system that has been strongly criticized by some international environmental groups (Macintyre and Foale, 2004). The adverse environmental impact of mining in PNG has generated major social disruption, including the loss of cultural and environmental knowledge in several areas of the country where mining has taken place. The project “Social, Environmental and Economic Sustainability in the Context of Melanesian Mining Projects” is a collaborative effort between the Australian Research Council (ARC), the University of Melbourne, and the Lihir Management Company, and is being implemented in three areas in PNG. This interdisciplinary project aims to integrate social and cultural analysis with agrarian and environmental studies, focusing on the development aspirations of local people, based on their understandings of social and environmental impacts at various stages of mining and on issues of long-term sustainability. The research addresses problems of cultural loss in the context of mining. It documents traditional uses of the local flora and fauna such as hunting and medicinal plants, as well as access to water, forests and land, and examines the effects of certain pressures, such as mining and population expansion, on traditional knowledge and its relation to ideas of biodiversity conservation. A local educational component is included, whereby schools participate in various research projects. The results are compiled, and findings, photographs, and other relevant materials are presented in posters, booklets and videos that are made available to the schools.

The project has been considered successful, but not without various setbacks along the way. The mining company lost interest in, and reduced support for, the project after it started, and this made work more difficult for some team members. Also, there is a profound tension locally between the desire for a better standard of living — which is facilitated by royalties, compensation, employment, and development programs associated with the mine — and the negative social impacts of mining, including loss of cultural and environmental knowledge and a pervasive disruption to traditional governance structures. This tension between aspirations for a more affluent life and the obvious loss of some aspects of tradition is not limited just to Lihir, but can be seen all over Melanesia.