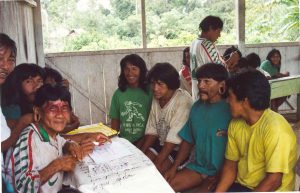 Ecuador’s Yasuni National Park comprises almost one million hectares of exceptional biological diversity and includes species such as the giant river otter, jaguar, harpy eagle and 62 species of snake. Adjacent to the Park is the Huaorani Indigenous Territory, with 600,000ha that have been declared a UNESCO Biosphere Reserve.

Indigenous peoples living in this region are Ecuador’s poorest and most vulnerable, yet they control huge areas of primary tropical forest. They are threatened by lack of security and are confronting serious and growing problems with illegal encroachment and colonization, including land clearing for agricultural purposes, continued petroleum production as well as illegal logging, mining and tourism companies, all of which is causing a rapid transformation of indigenous cultures. According to the Ecuadorian constitution and legal framework, indigenous communities must gain legal rights to their ancestral territories before they can acquire the constitutional right to be consulted prior to the initiation of extractive activities within their territories. This process involves a number of legal steps, such as demonstrating that they have occupied the territory for a certain period of time, as well as establishing their boundaries.

The project “Conservation in Managed Indigenous Areas,” or CAIMAN (Conservación en Áreas Indígenas Manejadas), was funded by USAID and implemented by Chemonics International Inc. in 2002-2007, in consultation with Indigenous Peoples’ Organizations (IPOs), primarily representatives of Indigenous federations. The project focused mainly on supporting the Awa, Cofan, and Huaorani indigenous groups and their respective federations, although it also provided some support to Chachi, Siona, Achuar, Kichua, and Secoya populations.

Work plans were developed through a combination of workshops with IPOs and consultations with organizations that have worked with these groups for many years. The project’s goals were to foster biodiversity conservation by helping secure Indigenous legal rights on ancestral lands; strengthen cultural identity and key cultural elements such as language and traditional medicine; and promote income-generating activities that are compatible with the local Indigenous communities’ socio-cultural and environmental setting and are both ecologically and economically sustainable (for example, eco-tourism — which is not feasible without a healthy ecosystem—and the production of handcrafts). As well, by ensuring that Indigenous Peoples were fully integrated into the development and implementation of work plans, the project enhanced capacity for biodiversity conservation within indigenous federations.

Training of forest guards and implementation of regular patrolling of 300,000ha of Cofan indigenous territory have resulted in eradication of coca fields, reduction of illegal fishing and hunting, and exposure of illegal mining. CAIMAN helped delimit and mitigate conflicts along 102km of the Huaorani territory and along 105km of territorial boundaries in the areas of Cuyabeno and Cofan-Bermejo, two highly threatened and biodiverse regions of the Amazon Basin. In addition, with CAIMAN support, Kichua communities obtained management rights over 100,000ha in the Yasuni National Park. Three Chachi communities in the buffer zone of the Cotacachi-Cayapas National Park now receive payments for the provision of environmental services and Chachi guards are responsible for ensuring that the environmental integrity of their territory is maintained. Recently the Minister of Environment issued a decree establishing the Awa’s full legal title to 100,000ha located within the National Forestry Patrimony, a significant precedent for human rights and conservation.