Re-establishing the inextricable link: Mbyá culture and biological diversity in the Atlantic Rainforest in Southeast Brazil 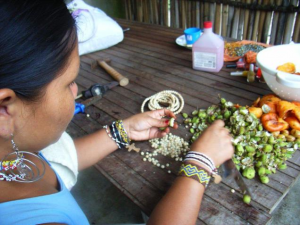 The Mbyá are one of the last surviving indigenous peoples of the Atlantic Rainforest in the Southeast of Brazil, known as Mata Atlântica, which once covered part of Paraguay, Uruguay, the North of Argentina and the whole coastal areas all the way to the Brazilian Northeast. Missionaries and scientists generally label the Mbyá as Guaraní-Mbyá, a label that the Mbyá politely shrug off, as they do not identify themselves as Guaraní.

During the past 500 years, the Mbyá were able to keep their language and their culture alive, because traditionally they are nomads. As pressures on the Atlantic Rainforest region increased, the Mbyá could always retreat farther into the forest. By the second half of the 20th century, although most of their ecologically rich rainforest ecosystem was destroyed, a significant portion of it survived, especially in the Southeastern Brazilian States of São Paulo, Rio de Janeiro, and Espirito Santo. The Mbyá were still able to carry on their nomadic lifestyle, traveling on foot for hundreds of miles from one Mbyá village to another, hunting animals and collecting honey, fruits and herbs in the forest. That all changed in the 1970s, when funding from international agencies allowed the construction of the Transamazonian Highway of the Southeast, which opened the heart of that surviving remnant of the Mata Atlântica.

At that time, the international agencies that had funded the road construction also provided funding for the creation of nature reserves and national parks as compensation for the rainforest destruction caused by the road. Instead of being demarcated as indigenous territory, the rest of the Atlantic Rainforest was declared “uninhabited” and designated as a strict conservation area—being considered as one of the world’s “hotspots” of biodiversity, and Brazil’s most endangered ecosystem. As a consequence, since the 1980s the Mbyá have nearly totally lost access to their highly diverse environment, and their long-distance movements are no longer possible. For that reason, today most of the about three thousand Mbyá have become “conservation refugees”: they must live in small villages at the edge of cities or close to roads, without enough land to plant their traditional staple crops and without access to the rainforest. They depend on governmental food packages and the production and selling of handcraft to tourists. In this way, the situation in the Southeast of Brazil is completely different from that of indigenous peoples in the Brazilian Amazon, such as the Kayapó, Tukano or Yanomami, who have been able to demarcate large parts of their traditional environment as indigenous territories.

What is highly at risk now is the inextricable link between Southeast Brazil’s biodiversity and the Mbyá culture, particularly their rich knowledge of the Atlantic Rainforest ecosystem, which is embodied in the Mbyá language. Because of the lack of access to their traditional environment, for about twenty-five years the Mbyá elders have not been able to pass on their invaluable rich knowledge about the Atlantic Rainforest plants and animals to the younger generations, as they used to do in the past. Sadly, every time that one of the Mbyá elders dies, an important part of the Mbyá culture and an important part of global wisdom dies out. At the same time, paradoxically, the very thing that conservationists are trying to preserve—that is, the rich biodiversity of the Mata Atlântica—is at risk, because, declared an untouchable wilderness, it has lost its people, it has lost its indigenous component.

This project focuses on the Mbyá village of Mamanguá, today the only Mbyá village located inside the Mata Atlântica, far from roads and cities between São Paulo and Rio de Janeiro. Mamanguá is a newly re-occupied site. Years ago, Mbyá Chief Roque Benites had a dream of finding this ancient Mbyá settlement, mentioned by his grandmother. Mamanguá is inside the state-owned nature reserve of Cairuçu, and since 2005 the Mbyá Chief has been trying to get Mamanguá demarcated as indigenous territory. At the moment, there are two to five Mbyá families living permanently there. But Chief Benites’s dream is to develop Mamanguá into a place where the spiritual leaders of the over 100 Mbyá villages can meet far from the white society, and renew their traditional connection with their sacred environment, their Mata Atlântica. Mamanguá is intended to be the place where the Mbyá can re-establish the inextricable link between their culture and the biological diversity of their traditional land.

Attempts to get government funding for this project have failed so far. To assist this effort, the project produced a CD with as yet un-recorded traditional Mbyá music. The CD was recorded in the Opy (holy house) of Mamanguá. Chief Benites was keen to have this CD not only to financially support some of the community’s urgent needs (such as roofs for their houses), but also as a statement to outsiders and other Mbyá communities that Mamanguá has been re-occupied by Mbyá people, and to push for the demarcation process. As well, the CD is part of Chief Benites’s future plan to have annual meetings in Mamanguá with the shamans of all the other Mbyá villages.

Currently, the project is seeking funding to pursue its overall goal is to help document and preserve the wisdom of the elders of the various Mbyá communities, especially their knowledge of the Atlantic Rainforest, and re-establish the intergenerational transmission of Mbyá traditional knowledge. Although the Brazilian government’s indigenous schooling projects have the stated objective to conserve the traditional knowledge of indigenous populations, in practice these projects hinder the intergenerational transmission of traditional knowledge. As with many other indigenous peoples in Brazil, Mbyá teachers are trained to educate Mbyá children along the same lines as the majority Brazilian society. Because of these government education projects, Mbyá children and young Mbyá leaders now have less time and inclination to listen to the elders. The project also aims to preserve the diversity of the traditional crops of the Mbyá, such as numerous varieties of corn.

In the longer term, the project seeks to show the importance of access to the natural resources of the Mata Atlântica for the Mbyá and for the Atlantic Rainforest itself, and to re-establish the link between people, language and landscape by promoting the creation of the indigenous territory of Mamanguá, which currently is a nature reserve. The hope is that this effort will lead to a different environmental policy in the Brazilian Southeast, along the lines of what happened in September 2009 in the State of Roraima, in the northern part of the Brazilian Amazon. There, the Yanomami regained access to a vast portion of their territory, which around 1995 had been declared a forest reserve to compensate for the environmental destruction caused by the construction of the Calha Norte road.