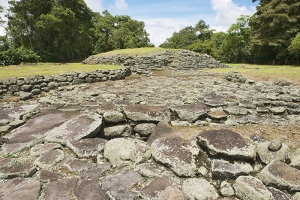 There are eight indigenous groups in Costa Rica, numbering some 63,800 people, which comprise 1.7% of the national population. Half of them are now settled in 24 reservations or territories, which cover an area of approximately 325,470ha or 6.3% of Costa Rica. The indigenous groups are: the Cabécar, Bribri, Brunca or Boruca, Térraba, Huetar, Guatuso or Maleku, Chorotega and Ngäbe-Buglé. In 2001, two new reservations were created by law: Altos de San Antonio (for the Ngäbe-Buglé) and China Kichá (for the Cabécar).

The Ngäbe people number some 180,000, principally located in Panama, although around 4000 reside in southern Costa Rica, close to the Panama border. The Ngäbe- Buglé of Costa Rica inhabit five reservations or territories in the south of the country: Coto Brus, Abrojos Montezuma, Conte Burica, Altos de San Antonio and Guaymí de Osa. The 23,600ha of Ngäbe reservations maintain around 70% forest cover, consisting of a rich variety of habitats encompassing three of the five elevational zones found in Costa Rica (tropical, premontane and lower montane) and three of the four humidity provinces (rain, wet and moist). Examples are the tropical very wet forests of the Osa Reservation and the lower montane moist forests of Coto Brus.

The Costa Rican Ngäbe are among the poorest people in the country, but until recently there were almost no development initiatives taking place in their territories. This is due in part to difficulties in funding and cash flow problems. In part, it is also due to their legal status: the Ngäbe were not accepted as equal-rights Costa Rican citizens by Congress until 1993. The Ngäbe face a variety of major challenges, including the occupation of up to 25% of the reservation’s area by non-indigenous settlers, poor access to health services and limited options for the production of food and cash. The abysmal indicators for all these problems are at odds with the generally good quality of life experienced by the majority of Costa Ricans.

Using a co-management approach in collaboration between the Ngäbe people and the NGO Fundación TUVA, the project “Support Project for the Ngäbe Indigenous People” (Proyecto de Apoyo al Pueblo Indígena Ngäbe) was set up to strengthen the organizational capacity and leadership of the Ngäbe, in order to reverse the loss of their culture, recover traditional political institutions and traditional medicine, support territorial defence and appropriate management practices, and improve agricultural production systems, health care, and education. Initially, the project’s emphasis was on sustainable production and use of traditional medicines, based on the priorities of the Ngäbe people, who determined what a healthy and vibrant community meant to them.

The project has supported a council of traditional healers who have operated a successful apprentice program and worked with a team to produce a book of traditional plants used for healing. This book was produced in the Ngäbere language and only distributed to the healers, owing to concerns regarding issues of intellectual property rights and benefit sharing. Responding to calls by the Ngäbe for the recovery of oral history and the teaching of it in indigenous schools, a team of youths and elders became involved in the production of the first volume. Inspired by this initial effort, the Ngäbe youth have continued with the production of a second volume and also a more ambitious project, a CD and tape of traditional songs. This involved coordination between elders and the youth who taped and transcribed stories, as well as with the Ministry of Public Education and teaching staff. These efforts were recognized by the nationally prestigious Ford Motor Co. Conservation and Environment Prize for Cultural Heritage awarded by the Minister for Environment. In the process, the Ngäbe youth are learning to write in their original language and a book on traditional medicinal plants has been written in Ngäbere language. Elders, indigenous teachers and Ministry of Public Education all contributed to establishing the written standard for the language.

A guidebook was also produced that interprets the legal rights of the Ngäbe to defend their territory and resources and claim their land rights. The project included a legal study to influence policy change with regard to indigenous rights to manage natural resources. The project was carried out in collaboration with The Amazon Conservation Team, which provided funding along with the UNDP Small Grants Program, Fundación CRUSA, IUCN, Fundecooperación and the Embassy of the Netherlands. The project was completed in 2003-2004, but some activities are ongoing and some participants are now local leaders.