Talking the Walk in Tanzania: Language as the Missing Ingredient of Biodiversity Conservation? 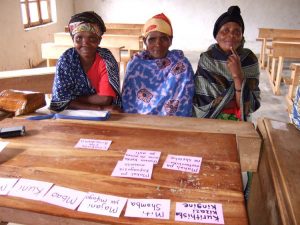 The Eastern Arc Mountain Chain in Tanzania is one of the thirty-three global biodiversity hotspots and provides an ideal opportunity to study biological and linguistic diversity. The range spreads from Southern Kenya to Southern Tanzania and was formed as the Rift Valley took shape creating isolated mountainous blocks replete with unique ecosystems and biodiversity, prompting the moniker “The Galapagos of Africa.” The mountains are home to two hundred endemic species of fauna and more than 800 endemic floral species, including the popular African violet (Saintpaulia) and Busy Lizzies (Impatiens), with new species still being discovered.

Tanzania is also linguistically diverse, with more than 127 Indigenous languages, although Kiswahili is the lingua franca, spoken by ninety-five percent of the population. President Julius Nyerere chose Kiswahili as the national language to promote peace, unity, national identity and tribal cohesion after independence in 1961, as it is a neutral language, not favouring one ethnic group or region over any other. The many vernacular languages are used within ethnically homogenous groups, predominantly in family settings in rural areas.

In Tanzania, both the unique linguistic/cultural diversity and biodiversity are under threat. A major challenge concerning the safeguarding of linguistic diversity is the lack of documentation on languages and language speakers, and national linguistic policies that neglect the importance of African languages for development. Kiswahili has the advantage of being neutral, but without support for the other languages it dominates all walks of life – business, education, religion, entertainment and administrative duties. The local languages are not recognized in any official capacity and are actively banned from being used in education or the media. English is an additional threat, since it is the language of global development and cooperation. The views of local people on these processes of modernization and change and how these affect the younger generations reflect current feelings and can offer insights into the future of local languages and culture in the area: “Our children don’t want to learn about the plants and the environment because they watch TV and go to school. They don’t have time. They want to get jobs in the big towns.” “Religion stops our young people from learning about their traditional knowledge. They listen to that God and not ours.” “Traditional languages are out of date.”

Tanzania’s unique biodiversity is also endangered. Changes in land use to accommodate the food needs of a growing population are the cause of habitat loss. In addition, the all-pervasive reach of globalization and westernization and the accompanying acculturation are increasing challenges for the Tanzanian population to manage their resources. Residents of the Lushoto District of Tanzania comment: “The forest used to come right to the edge of our village. We could get everything we needed there. Now the village has got bigger. There are more people. The forest has moved away, it is smaller. More people are cutting down trees to build houses and farms. The trees are less so the rain is less too and the soil is bad. It is a problem for our farms as we can’t grow enough food.” “It is now more difficult to find plants for medicine. I have to walk further and further. It takes me much longer to gather plants than it used to.” “We used to easily find mushrooms and plants for vegetables. They were everywhere. Now it is difficult.”

The project “Talking the Walk: Language as the Missing Ingredient of Biodiversity Conservation? An Investigation of Plant Knowledge in the West Usambara Mountains, Tanzania” was a doctoral project based at the University of East Anglia, Norwich, UK, in collaboration with the Faculty of Language and Linguistics at The University of Dar es Salaam, the Tanzanian Forest Research Institute and The Friends of Usambara cultural and eco-tourism group. Research focused on Lushoto District in the West Usambara Mountains of Northeast Tanzania, an area little researched but highly threatened in terms of an increasing population living on steep-sided hills that are intensively farmed for both subsistence and cash crops. The intensity of these activities, coupled with forest encroachment for medicinal plants, supplementary foodstuffs and timber are all contributing to habitat loss, soil erosion, water shortages and the invasion of exotic species. The local population has extensive knowledge of wild plants, using them primarily as supplementary foods such as greens, mushrooms and fruit and medicinal plants.

The aim of the project was to examine the biocultural dynamics of language in Tanzania, exploring the possible links between language and indigenous education for environmental and cultural sustainability. The project focussed on the role of local languages (in this case Kisambaa and Kimbugu) and traditional knowledge in conserving the local environment and contributing to livelihood resilience and economic opportunity. The project investigated if language shift is taking place as Kiswahili becomes increasingly important in daily communication and socio-economic interactions, and what the implications are of this language shift for local languages and biodiversity conservation. These findings were then related to education and biodiversity conservation policy in Tanzania.

Research results show that language shift is indeed occurring in Lushoto District. Kiswahili and English are becoming the languages of choice above the local languages Kisambaa and Kimbugu. Within traditional spheres where the local languages would customarily be used, such as around the local area, the market, and within peer groups, Kiswahili is pushing out the vernaculars into smaller and smaller arenas such as the home and among elders. This is reflected in comments from participants: “I teach my children Kiswahili because it is the acceptable language. It is the language we speak everywhere. Everyone understands it.” “I speak when I meet those who know them, but Kiswahili is everywhere.” “I speak those languages [mother tongues] at home because at school we are not allowed to speak in Kisambaa. I speak to my friends in Kiswahili.”

There is one domain in which the local languages are remaining dominant, however: the area of ethnobotanical knowledge. Discussing plants — their uses and other pertinent knowledge, such as the plants’ ecological needs and locations — is better performed in the mother tongue. The inter-ethnic dominant language of Kisambaa appears to be the language most applicable for locally specific ethnobotanical knowledge and is popularly chosen for identifying plants and describing plant practices. Kisambaa is also chosen for the purpose of transferring this indigenous plant knowledge across generations.

These findings point to the need for integrated intercultural and multilingual conservation practices. Local languages are essential for transferring locally specific indigenous knowledge that is vital for conserving the local environment and for providing the local population with livelihood resilience and economic opportunities. The findings raise questions and offer insights into Tanzanian and international debates on the use of mother tongue as the language of instruction in decentralized education systems. They also shed light on the language and knowledge base best suited for use by institutions involved in biodiversity conservation, so as to put into place the most successful practices. The fieldwork section of the project was completed in 2007 and the results are currently being finalized.

Academically, the project has contributed to the field of biocultural diversity, widening its research base to include Africa. Most importantly for the local population, a series of three books will be published so that local knowledge in a format understandable to all is documented. In the process, the books will aid environmental and cultural conservation and contribute to indigenous language preservation and maintenance. The books contain local folk stories written in the two local languages alongside Kiswahili, with pictures by local artists. A third book will have photographs of locally specific economically, socially, and culturally important plants, their names in the local languages, their uses, ecological niches, and conservation status.

A draft copy of one of the books was shown to the research participants. Their comments show that it was well received: “I have never seen my language written down before. This is very special.” “This is so important for us. Everyone will want one of these books to show their children and grandchildren. You must print many.” “The pictures of these plants will help us, and our children, to take care of our environment.” “Our language will now be known and remembered by so many people.” The books will be made available in the local area at a nominal cost. It is hoped that the popularity and success of these books will encourage other people in other areas to document their local knowledge in their own languages for future generations, inspiring and motivating the government and other funding bodies to set aside resources for similar vitally important projects.