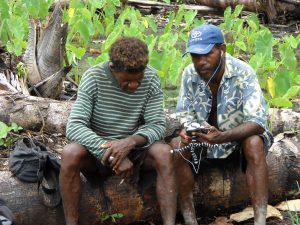 Kala is a language with four distinct dialects spoken by approximately 2000 individuals in six villages (from north to south Manidala, Lambu, Apoze, Kamiali, Alẽso and Kui) along the southern Huon Gulf coast in Papua New Guinea. Until recently, very little linguistic research had been conducted with Kala speakers (see Johnson 1994 and Collier and Collier 1975). However, Wagner, an ecological anthropologist, conducted his doctoral research (2002) on resource management practices in two of the Kala communities (Kamiali and Kui) and other researchers have often visited the Kala community of Kamiali, particularly biologists, since there is a wide-range of biological diversity in the area. Dr. Ken Longenecker, a marine biologist from the Bishop Museum of Hawaii has been working on research involving fish species around the coral reefs at Kamiali since 2006. As well, there has been a turtle conservation project running since 1999. This project was facilitated initially by Village Development Trust, a local NGO, but now operates as a partnership between villagers and the Marine Research Foundation, an international NGO that runs conservation programs throughout Asia.

While Papua New Guinea is widely known as an area with high levels of biolinguistic diversity (Nettle and Romaine 2000), Tok Pisin, the creole lingua franca of the country, as well as English, have been edging out indigenous languages across the country (Kulick 1992). In the Kala speaking region, there is diversity across the villages as to the level of Kala retention, but Tok Pisin is steadily replacing Kala, causing language shift in all villages (Wagner 2008). The fact that English is the official language of education in Papua New Guinea has also helped to cause language shift here. While there are policies in place across the country that state that children should be taught in their indigenous language for their first three years of schooling, language diversity and limited resources and teachers have not guaranteed the equal implementation of these policies across Papua New Guinea. Noticing the language shift occurring in the Kala communities during his doctoral work, Wagner realized “how fundamental the [Kala language] was to the transmission of entirely basic, never mind more esoteric levels of ecological knowledge and related skills” (2008: 4); this realization sparked the development of the Kala Vernacular Education and Local Ecological Knowledge research project. 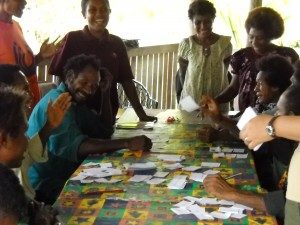 The goals of this project were to create a standard orthography for the Kala language for use in education programs in the Kala villages, as well as to record local ecological knowledge in the Kala language to be used in curriculum materials. Since many concepts do not have equivalent translations in Tok Pisin and/or English, if this knowledge is not recorded it is in danger of being lost along with the Kala language. Finally, the development of a Kala orthography would also make possible the publication of research results, particularly of biological studies, in both Kala and English. In order to accomplish these goals, a team of researchers including John Wagner, Christine Schreyer, and Chara DeVolder[2], an undergraduate assistant, traveled to the Kala speaking villages in May of 2010. They began their stay by meeting with the Kala Language Committee, which consists of three representatives from each village usually two male and one female, in order to discuss the communities’ priorities for the research, our budget[3] for the research and our time-line and schedule. Following this initial meeting, we traveled to each of the six Kala villages in turn in order to conduct our various individual research goals. Wagner recorded stories about traditional economic activities such as gardening and fishing practices, as well as local ecological knowledge in order that this information can one day be incorporated into Kala language curriculum materials. Schreyer and DeVolder conducted language elicitation interviews using a pre-determined wordlist[4] in order to conduct phonological analyses in order to provide suggestions for a standardized Kala orthography that Kala Language Committee members would decide upon at a meeting held in June, as well as the morphology and syntax of the language in order to develop a preliminary Kala dictionary.

Following review of the phonological data, a meeting was held with the Kala Language Committee where Schreyer presented suggestions for a standardized Kala orthography and the committee members decided, by consensus, which symbols to use to represent their language.[5] Following the orthography decision, members of the Kala communities, including research assistants and Kala language teachers, came together for a five-day curriculum development workshop in Kamiali village. At this workshop, participants were taught the new standard orthography, transcription techniques, and were also given the chance to develop curriculum materials in the Kala language. Each community made at least two storybooks and posters or books that illustrate the new orthography. Some participants also developed other items such as recording traditional stories, known as labauwiya, songs, plays, riddles and games. One game that was developed is a perfect example of how the goals of the Vernacular Education and Local Ecological Knowledge project have blended together. During the game, players must plant a garden with local foods and then try to get through twelve cycles of game play (simulating twelve months of growing) with food remaining in their garden. On each turn players pick a card that tells them if something good (for example, lots of sunshine) or something bad (for example, a landslide) has happened to their garden and they must act accordingly, potentially adding or removing plants. These cards reflect the reality of gardening life in the Kala villages and, thus, are an excellent teaching tool about environmental practices, as well as social practices since players can share some of their plants with their neighbours in order to help them with their harvest. The creation and playing of the game at the workshop was a source of much hilarity and every community copied the playing pieces in order that they could take a copy of this game home with them. 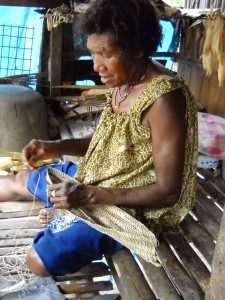 While there is still much more work to be completed on the Kala Language Vernacular Education and Local Ecological Knowledge project, they had a very successful trip to the Kala villages in May and June of 2010. They have continued to work with our research partners in the Kala villages since their return. For instance, a draft version of the Kala dictionary (mentioned above), which is based on themes such as plants, animals, nature, family etc, was sent back to all of the Kala villages in February of 2011 in order to receive feedback from the community members. They expect to receive the comments from the community members soon and incorporate this into the newly revised version of the dictionary. They also look forward to continuing our working relationship with the communities in the future as we process the data we collected in 2010 and train our local research assistants to continue to collect and transcribe traditional stories, record local ecological knowledge, biographies of community members, and songs that will one day be used in their local Kala schools.

[1] These are the village names in the Kala language. They are official known on maps as: Kela, Laugui, Laukanu, Lababia, Buso and Kui.

[2] Chara DeVolder was able to accompany Wagner and Schreyer to PNG because she won an Undergraduate Research Award from the Irving K. Barber Endowment at UBCO in order to conduct her own research on the morphology and syntax of the Kala language.

[3] Wagner and Schreyer were funded from the UBC’s Hampton Award and the Firebird Foundation for Anthropological Research.

[4] Wagner had conducted preliminary language elicitation interviews during a trip to the community in 2006 and these word-lists were an extension of the list used in those original interviews.

[5] See Schreyer (In Review) for more details on the orthography decision process.