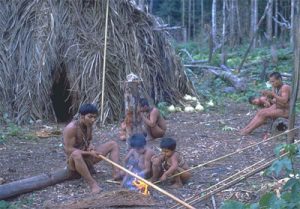 In 1999, the national constitution of Venezuela gave explicit recognition to the land rights and cultural rights of the country’s indigenous peoples. Following passage of the new constitution and subsequent demarcation laws, several indigenous groups began taking the initiative to carry out the demarcation of their lands on their own rather than wait for the government to do it for them. The project “Ethnocartography and Self-Demarcation of Indigenous Peoples’ Lands in Venezuela as Tools for Biocultural Diversity Conservation” is a collaboration between researchers at the Instituto Venezolano de Investigaciones Científicas (IVIC) and two indigenous communities in Venezuela – the Hotï of San José de Kayamá, Caño Iguana, and surrounding regions, and the Eñepa of San José de Kayamá. These two small-scale, culturally unique indigenous groups, whose lifestyles and resource use practices are compatible with environmental conservation, are currently faced with strong pressures for social, techno-economic, and ideological change.

The project is an active collaboration between local community members – who are the principal data collectors and processors – and scientists, who act as advisors and assist in data analysis and document preparation. The project supports the indigenous groups in efforts to secure legal ownership and title to the land they occupy in a tropical forest region rich in biodiversity. This goal contributes to conservation of both biological and cultural diversity, as well as the crucial relationships between them, by seeking to obtain exclusive rights to land occupation and use for the Hotï and Eñepa, and by attempting to achieve land and resource security for these two groups. Community members are being trained in community-based mapping and documentation to produce the necessary cartographic, demographic, and cultural-historical documents to support their land claims. Members of local Hotï and Eñepa communities are the principal data collectors and processors and work alongside scientists who serve as advisors, trainers and auditors of the data collection process and provide assistance in data analysis and document preparation. The documents being prepared include maps of current and ancestral territories, community censuses, residential histories, oral histories of human-ecosystem interactions, information about land use patterns and resource management practices, cultural norms and notions about territoriality, property, local and ethnic group membership, environmental ethics, and ecocosmovision and ethnogeographical concepts. The project has also led to greater conscious awareness of the value of traditional knowledge of the environment for the current and future lives of the people. Changes in language are also being documented in order to examine links between language, traditional knowledge and environmental change. The final maps, project reports, and other supporting materials were completed in August 2006 and provided to the appropriate National and Regional Demarcation Commissions. This marks the first step in the formal application for land rights recognition. Future plans for the project include adapting the database, maps, and reports into educational materials for use by the Hotï and Eñepa communities.

The main challenges faced by the project were mostly technical and logistical. Rather than having outside researchers come in and do the job, the project design emphasized active local participation in different phases of the project. This meant that local capacity building and transfer of information and technology were primary goals along with map making. The idea was not simply to make a map but also to help local people become mapmakers and map users. In that sense, the project plan called for local people to do most of the basic data collection and processing work. The data collection involved having small work teams traverse different sectors of their territory and record the geographic coordinates of the places that were significant for them, along with the place names and a brief description of the cultural significance in their own words. The local people had to be taught how to read and record data from GPS machines. Since they had no previous experience with this technology, a few weeks of training and supervised repetitive use were spent with each group.

After the field data were recorded on the data sheets, it had to be entered into a computerized database. The communities had no prior hands-on experience with computers and had to be taught computer literacy from scratch. This required a sustained effort over a period of many months. Computer training sessions were held both at IVIC and the home communities, with candidates initially selected by the communities themselves. A typical training session would last two weeks, although frequently the training steps had to be repeated several times for the trainees to become familiar with the tasks. The researchers were also required to review the recorded results on a periodic basis to correct data entry errors. Because of the great distance between the participating communities and IVIC, as well as the high cost of travel between the two places, trips of researchers to the communities or of local collaborators to IVIC could only be accomplished a few times a year. Furthermore, the local participants frequently had other activities and responsibilities (for example, some were school teachers, others with household heads with a family to feed) and were only able to dedicate themselves to the project in their free time. The overall result was that the work was carried out on a piecemeal, rather than a continuous, basis.

Another reason for the slow pace of work was the sheer scale of the land area that was mapped. In the case of the Jotï this was about 5000km sq and in the case of the Eñepa it was about 3000km sq. The GPS work teams had to undertake long treks and camping trips lasting from several days to more than a couple of months. The overall result was that the field data collection and processing phase of the project lasted for more than three years.

Another challenge has been government inaction. The principal overall goal of the project was to produce the documentation necessary for the two groups to win legal title over their lands. Therefore, the ultimate measure of success of the project must be the official grant of land title to the communities. As yet, this goal remains to be realized. Even though all of the legal documents were completed and handed in to the proper and officially designated authorities in 2006, no firm or concrete decision has been made so far regarding the land title claimed by the Jotï or Eñepa or any other indigenous group that has made the same kind of application. Some observers have questioned the willingness of the government to honour in practice the commitment it has made on paper to claim the land rights of its indigenous peoples. There are several reasons for doubting the government’s willingness to live up to its commitment. First, since the new Indian land law was passed, the only land titles that have been given out are small, community-based, usufruct type titles that are essentially equivalent in scope and property rights to the provisional land grants that were made in previous government administrations under the 1960s agrarian reform law. Second, the government agencies in charge of administrating the process have repeatedly changed the requirements for application. Moreover, some groups that have submitted applications have been told that the documents had been lost and had to be resubmitted. Third, even though the law states that the government will fund the process, so far funds have been hard to obtain through official channels. As a consequence, the indigenous groups that have undertaken their own demarcation projects and managed to amass the documentation that is required are still waiting for a concrete decision from the government.