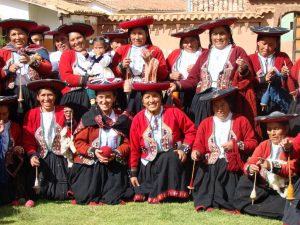 The group of weavers working in Chinchero in April, 2007. This group has only gotten bigger since this photo was taken.

The Center of Traditional Textiles of the Cusco (CTTC) was founded in 1996, when the textile traditions in the Cusco Region of the Andes, based in the ancient Pre-Columbian cultures of Peru, were in danger of disappearing forever. Younger generations had ceased to learn how to weave as well as the traditions behind it, leaving the fate of Peruvian textiles in the hands of aging generations.

The principal objectives of the Center are to recapture the history of, spread information about, and stimulate the production of traditional textiles, as well as provide support and assistance to the communities of weavers with which the Center works. By researching and documenting techniques, styles and designs, the Center works to preserve weaving traditions for future generations.

Presently, the Center works with nine communities in the Cusco Region: Chinchero, Chahuaytire, Accha Alta, Patabamba, Mahuaypampa, Sallac, Chumbivilcas, Pitumarca and Acopia; All of which preserve unique ancestral techniques in their textiles. These communities are working to improve their quality of life while reinstituting millennia old practices integral to their cultural history and identity. By promoting the sale of textiles, providing each community with an appropriate place to weave, and, above all else, encouraging younger generations to weave, the Center for Traditional Textiles of Cusco is accomplishing one of its more desired goals: enabling Cuzqueñan weavers to feel proud of their heritage, traditions, and, most importantly, themselves. 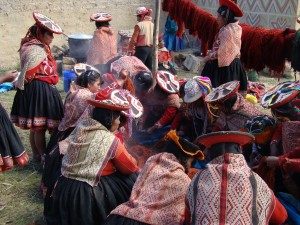 Photo from a group dye day in Accha Alta, in which the weavers are rinsing out a batch of freshly dyed yarn. During one of these events, the CTTC goes to the community with all the materials needed for dyeing and the weavers bring all the yarn they have prepared, to be sorted and dyed depending on the colors they want to weave with.

The textile traditions and practices in Peru date back thousands of years, and continue to be of great importance for Andean cultures as symbol of their cultural identity. The Andean Textile brings with it all of the elements of a form of communication, with codes and figures that represent a textile’s place of origin, author and an artistic representation of the Andean world. The designs, colors, sizes and materials used in each textile vary from region to region. More specifically, each community differs in its traditional clothing as well as in styles of weavings. Textiles have many functions and uses in the Andes, from the most basic used in daily life, such as clothing and carrying cloths, to the most transcendental, fine weavings used for offerings to the gods.

In modern times, Cuzqueñan weavings continue to be woven by hand on belt looms and/or four stake looms. Each textile can be one sided, with the design existing on only one side of the textile, and a negative of the design on the other, or two sided, where the design is repeated equally on both sides of the textile.
In the Andes the practice of dyeing yarn with natural dyes was heavily displaced by the introduction of industrial, synthetic dyes, and in Cusco the practice of natural dyeing was abandoned almost completely. The dyeing workshops the Center conducts with the communities has begun to revive this traditional practice and today all of the Center’s partner communities utilize plants, insects, and minerals to dye their wool. From the insect cochineal, with a combination of different mordants, several shades of red, purple and pink can be obtained. From the Q’uolle flower, yellow. From the Nogal, brown. From the leaves of the Chilq’ua, green. And from indigo, many shades of blue.

The weavers in the communities are encouraged to learn the regional dialect of Quechua, or Waywash, as well as Spanish and English, as the majority of the names of the weaving patterns and dye plants are Quechan. The subtleties and nuances of many of the meanings are lost in translation, as the language of textiles and patterns in the region was originally Quechan.

There are a few things that make Sallac unique amongst the nine weaving communities. The first is their continued participation in the use of Ikat in their weaving. Ikat is a resist technique that is done to the warp—they tightly wrap the warp before dyeing the yarn to create a pattern that will appear later during the weaving—and is a rare technique in the region. The other is their cultivation of the Prickly Pear Cactus. The prickly pear is the cactus that the insect Cochineal lives on, and in Sallac they are growing them with the intention of trying to start a Cochineal insect colony. As they are the community furthest south, they’re potentially warmer than the rest and this increases the potential for a flourishing colony of Cochineal.

The CTTC is about to begin re-establishing the traditional use of Peruvian Indigo Vat Dyeing (Indigófera suffruticosa) in their affiliated weaving communities. They will be using a natural indigo process, specifically with no chemicals, to reduce the impact on the land and water in the communities that keep vats.
During the last three years, CTTC researched the native indigo plant, Indigófera suffruticosa, to figure out how to get pigment. They began growing it in cooperation with farmers in the Convencion Provence of the Southern Highlands in the Cusco Region of Peru. The group was successful in using the pigment from the plants to get the beautiful deep blue indigo is associated with.

Romulo Aragon, who CTTC began the project with, will be involved in the next phase of our involvement with indigo. He and his family were integral to the experimentation phase of the project, lending their knowledge on how to prepare the soil to grow the plants, collect seeds, plant the seeds, harvest the plants, get the pigment and then dye the yarn. In this next phase CTTC will be working more closely with Romulo, to find a larger plot of land for him to help cultivate a larger crop of indigo and continue these dye traditions. However, it is the Center’s intention to slowly remove themselves from the project—the idea being to help the people in the jungle region begin cultivating indigo in a way that makes them self sufficient in growing, producing pigment, and selling native indigo in the region. In setting the example that it is possible to be self sufficient in Indigo cultivation, it is their hope more famers in the Convencion Provence will follow Romulo’s suit and, in doing this, help preserve the indigo traditions of the region.

The Center works with nine different communities with approximately 350 adult weavers and 250 children in all. This demonstrates the local enthusiasm to revitalize weaving traditions as well as an almost guaranteed survival due to the number of children and teenagers that continue to be involved in the revitalization process.

The younger generations play a key role in textile development in each community, learning to weave from a very early age by observing their parents and acquiring the foundation necessary to later become master weavers.

Over time, the Center for Traditional Textiles has accomplished many of its goals and objectives, while also serving as a model for other projects of the same end, maintaining its place and role of importance for the textile arts of the Cusco region.