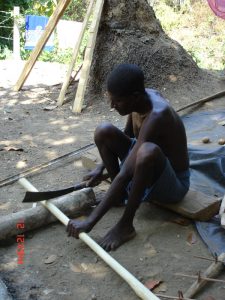 The Andamanese represent the last survivors of the pre-Neolithic population of Southeast Asia. Genetic research (Thangaraj et al., 2005) indicates that the Andamanese tribes are the remnants of the first migration from Africa that took place 70,000 years ago. Of the 50 remaining Great Andamanese people who live in the Strait Island and in the Andamanese  city of Port Blair, in the Union Territory of the Andaman Islands of India, there are only seven terminal speakers of the Great Andamanese language, popularly known as Jero. Even these few speakers have stopped speaking the language among themselves. The present-day Great Andamanese language is a mixed variety of 3 to 4 languages once spoken on these islands. The project “Vanishing Voices of the Great Andamanese” was funded by the Hans Rausing Endangered Language Fund under the Major Documentation Project, School of Oriental and African Studies, University of London, UK. The project highlighted the need for policy to assist in the revitalization of threatened languages and cultures. Its primary objective was to obtain first-hand knowledge of the linguistic situation of the aboriginal communities, as a basis for developing an interactive trilingual dictionary (Hindi-English-Great Andamanese). Another important reason for undertaking this project was to confirm the hypothesis that the Great Andamanese seemed to be a language distinct from the rest of the tribal languages of the islands, implying that this could have been the sixth language family of India. This has now been confirmed and corroborated by geneticists.

The project gathered oral histories, pictures of the local habitat, audio and video recordings of the surviving speakers, as well as sociolinguistic sketches. These sketches highlight local beliefs and behaviours, indigenous names of the islands and their different locations, as well as Indigenous knowledge pertaining to the biodiversity that once existed in the islands, which is stored in the lexicon. Recorded information includes the names of a large variety of crabs and fish, various words pertaining to different areas of sea shore and deep sea, uses of different kinds of leaves for hunting and gathering activities as well as for medicinal purposes, and local ecological knowledge of impending environmental disasters. A remarkable example in this regard is the perception that the Great Andamanese people had of the approaching tsunami that hit the region in 2004 and the means they employed to save themselves from devastation.

The trilingual and triscriptal dictionary in Great Andamanese-English-Hindi has now been completed and will soon be published. Sample pages can be found on the project’s website (www.andamanese.net/dictionary.html). The dictionary includes 4100 words, accompanied by 400 colour pictures and more than 900 sound files. It is rich in detailed ethnographic information and ecological knowledge that the Andamanese still possess. When a demonstration of the dictionary was made to the Great Andamanese tribes, there was a great sense of happiness and pride among them. Some of the elders were immensely thankful to the project leaders for undertaking the work, something that could not have been accomplished without the help of the speakers themselves.

Another major outcome of this project is a comprehensive grammar of the Great Andamanese language, which is still in the process of being completed. Extensive video and audio recordings of narrations, songs, tales, and dialogues in the natural surroundings of the tribes are documented. Other books include “Where have all the Speakers Gone? A Sociolinguistic Study of the Great Andamanese” (Abbi, Som and Das, 2007) and “Endangered Languages of the Andaman Islands” (Abbi, 2006) with an accompanying CD-Rom that presents, for the first time, the sounds and pictures of the tribes in their natural surroundings, serving as a rare audiovisual account.

A small picture book of photographs of the tribes in their local environments recording birth, death, cultural ceremonies, and life in both rural and urban areas has also been published. A first-ever CD of Folk Songs of Great Andamanese was launched in March 2008 in Port Blair and a copy of it was distributed to every household of the tribe in a function held in the school where most of the Andamanese children study. Also, no one in the community had heard any folk tale or story in the last fifty years, as when a language dies the art of storytelling and the indigenous folk tales die along with it. However, with great difficulty, ten short stories were recorded in multiple sessions from the elders of the society. A collection of these folk tales is being published. Individual stories in the form of individual books for children are in press. Each book will be colorfully illustrated and translated into eighteen official languages of India. These stories will reach a large number of people to share knowledge of one of the most ancient civilization of the world. To impart literacy among the young tribal children, the first Book of Letters was written in the Devanagari script, the script that is officially accepted in the state of Andaman and Nicobar. The book contains multi-colored pictures and was distributed to every child in the community. The local administration has acknowledged that the project has brought results. The teaching of the language has been introduced to small children studying in the Nursery School of the Strait Island.

There were significant challenges in the task of documenting this language. First, there was a lack of will on the part of the community and the Government of India, who did not come forward to facilitate the project. A host of bureaucratic hurdles had to be overcome to achieve the project’s goals. Some of the local officials who were to issue passes to travel to Strait Island would not oblige despite permits from the Ministry of Tribal Welfare and the Ministry of Human Resource and Development. Once the work started and the community members understood the motive and realized the importance of the work, they were ready to assist.

Another challenge was the lifestyle of the male members of the community. Alcoholism has had a negative impact on the society, and most often male members were unavailable for interviews because of drinking. There are mixed opinions on the project: the elders are sad to see that the heritage language is virtually dead, since their children do not understand it. They are also concerned that the youth no longer know how to make a boat or hunt in the sea or in the forest. However, most of the members see no problem with losing their language, as they do not think that their language is of any importance to the modern world.

Despite the shortcomings, it can be said that the project has been very successful. It achieved much more beyond the initial goal of language documentation. The main reason for success was two exceptionally helpful consultants, who were more than willing to assist with data elicitation. One of the male research assistants thinks that if more male members were available, more could have been accomplished. The consultants involved in the project felt that the Government should take the initiative to hire them to teach the basic Great Andamanese in schools and introduce a course in the school on Andamanese culture. Nao Jr., a Great Andamanese speaker, commented: ‘Our own children do not understand us. We should tell them what we are and what we speak.’