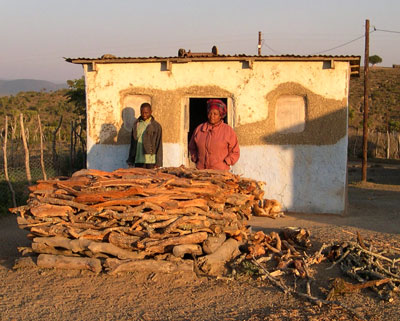 Since the 1980s, the government of South Africa has taken a more people-centred approach to conservation, and most legislation has been updated to articulate the need for the participation of local people in the management of biodiversity both within communal areas and on state-owned land (Kepe, 1999; Campbell and Shackleton, 2001). Despite the recognition in South Africa that culture is intricately bound to the use and management of biodiversity (Bernard, 2003; Fabricius, 2004), however, the use of culture as a tool in conservation strategies has not as yet been explored within the South African context (Cocks, 2006).

South Africa offers an excellent opportunity to observe whether and to what extent the effects of cultural values on biodiversity are preserved under non-traditional conditions, as the country witnessed 46 years of turbulent political history, during which time the state forcibly moved more than 3.5 million people into “homelands”, established under the apartheid regime. Consequently, in this context the concept of “local communities” seldom represents people who have historical continuity with pre-colonial societies. In contrast, they are completely reliant on the national economy. In response, the project “The Significance of Non-Timber Forest Product Utilization and Cultural Practices in Rural and Urban Households: Implications for Biocultural Diversity” aimed to assess the importance of biodiversity with respect to cultural and utilitarian values among different categories of non-traditional communities in South Africa and to evaluate factors that contribute to the persistent use of biodiversity for cultural practices. The project also aimed to reflect on how the cultural values of biodiversity could contribute towards biodiversity conservation. The project was conducted from 2000-2005 in South Africa for a doctoral research based at Wageningen University in The Netherlands.