Working with Traditional Knowledge in Land Use Planning: Gwich’in Place Names, Land Uses, and Heritage Sites in the Northern Territories of Canada 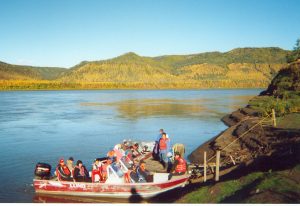 Hills at Tl’oondih where summer and winter trails led to traditional Gwich’in hunting grounds in the Yukon, and a clearing where one Gwich’in elder had his camp. Credit: Ingrid Kritsch, GSC

The Gwich’in are one of the most northerly aboriginal peoples on the North American continent, living at the northwestern limits of the boreal forest. Many families still maintain summer and winter camps outside their communities. Hunting, fishing and trapping remain important both culturally and economically, with caribou, moose and whitefish being staples of the local diet. The Gwich’in Social and Cultural Institute (GSCI) was established in 1992 because the Gwich’in were concerned about the loss of their culture and language and the impact this was having on their families. The Dinjii Zhu’ Ginjik (Gwich’in language) is one of the most endangered Aboriginal languages in Canada. Due to the encroachment of English into all aspects of daily life, only a small number of elders and a few determined individuals continue to use the language on a regular basis, and it is rare to hear children speak the language. Government statistics in 1998 revealed that only 2% of all the Gwich’in spoke the language in their home, and only 13% reported they could speak the language at all. The last generation of elders who lived on the land and consequently have an in-depth knowledge of it, is passing away very quickly and there is great pressure to record their knowledge before it is too late.

The “Gwich’in Place Names and Traditional Land Use” project is carried out by the GSCI, the cultural and heritage arm of the Gwich’in Tribal Council, in collaboration with Gwich’in communities in the land claim area. The project is based in the Northwest Territories, Canada and promotes sustainable land use among the Gwich’in First Nation through the application of their traditional knowledge to land use planning. Project research documented Gwich’in traditional knowledge and land use through the study of place names, traditional land use, ethnobotany, ethnoarchaeology, elders’ biographies, genealogy, a Gwich’in language dictionary, the replication of 19th century caribou skin clothing, and the identification of National Historic Sites in the Gwich’in Settlement Region (GSR). Gwich’in place names and the associated stories along with trails, traditional camp sites, graves, historic sites, harvesting locales and sacred or legendary places are windows into Gwich’in culture and history. The project has also successfully brought elders and youth together on the land to promote and pass on the language and knowledge about the land and the culture. Efforts to record and revitalize the language are also a vital part of the work at the GSCI, where all research projects have a language component, even though it is also a challenge to find skilled people who can translate and transcribe the language in a standardized way. Funding is also a challenge. It is difficult to find multi-year funding, and consequently most of the funding for the project has been on a year-to-year basis.

Language and education programs include language revitalization initiatives, the development of curriculum materials, a language immersion camp and an annual Gwich’in Science Camp, which is an on-the-land traditional knowledge and western science camp for senior high school students. The inventory of heritage sites assembled during the course of this project plays a critical role in land use planning in the GSR. It is used to review land use permit applications with the goal of ensuring sustainable development of Gwich’in lands. A Gwich’in traditional knowledge policy, called “Working with Gwich’in Traditional Knowledge in the Gwich’in Settlement Region”, was approved by the Gwich’in Tribal Council in June 2004 and is used to direct all traditional knowledge research carried out in the region.

This project has proved to be very successful. The opportunity to bring elders and youth together on the land, promoting and passing on the language and knowledge about the land and the culture, has occurred during the research, which is much like the way traditional learning happened in the past. There has also been official recognition of traditional Gwich’in place names on maps and highway signage in the GSR, and the history behind these places is being acknowledged in interpretive centres in the North. One of the consequences of the work was that in 1994 one of the Gwich’in communities officially changed its name to honour the location’s traditional name: Arctic Red River became officially known as Tsiigehtchic, a Gwich’in name that means “mouth of Iron River.”

The project has provided information towards the production of educational materials, such as a major land-based and community history book that is now being used in local schools, an ethnobotany book and kit for the local schools, and a web site that features a “talking place name map” and virtual tours of the Mackenzie, Peel and Tsiigehtchic Rivers. It has led to the successful designation of the largest National Historic Site (NHS) in Canada (Nagwichoonjik NHS, on the Mackenzie River from Thunder River to Point Separation) and the nomination of eight Territorial Historic Sites. It has helped the Gwich’in to assess proposed land use activities in the GSR and how they might impact heritage sites. Finally, it has allowed the identification of heritage sites, special management areas and protected areas within the Gwich’in Land Use Plan, ensuring that Gwich’in lands will be taken care of in a sustainable way both today and in the future.