Worlds of Difference: Local Culture in a Global Age 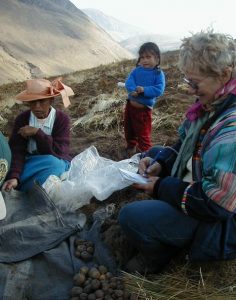 Homeland Productions (http://homelands.org) is an independent, non-profit journalism cooperative in Tucson, Arizona, USA, specializing in radio documentaries. Its mission is to illuminate complex issues through compelling broadcasts, articles, books, and educational forums, and to foster freedom of expression and creative risk through the media arts. Homeland reaches tens of millions of radio listeners through its features for mainstream news and public affairs programs in the USA. The “Worlds of Difference” radio series was produced by Homeland for national broadcast on public radio stations in the USA. It used both radio and the internet to generate awareness of how people with strong local traditions are responding to the pressures and opportunities of rapid cultural change.

The radio series (http://homelands.org/worlds), which ran from 2002 to 2005, produced 40 feature stories from 27 countries and six hour-long radio specials. The specials, organized by theme (economy, language, religion, home, history, future), were distributed by National Public Radio and aired on more than 100 non-commercial radio stations in the USA. Teachers in several states report that they have incorporated the website and the audio (available online) into their curricula.

One of the project’s documentary features focuses on Andean potato farmers and the pressure on them to convert land and labour into cash, which threatens their vast traditional knowledge of agrobiodiversity, including knowledge of hundreds of varieties of potato. Farmers are compelled to replace potato and other crop varieties with more marketable (or higher-yield) “improved” varieties, or to concentrate on growing a smaller number of traditional varieties for sale to niche markets. Thanks mostly to the work of NGOs and scientific organizations, there is increasing, although still not widespread, public recognition in the region of the need to conserve agrobiodiversity. Some farmers now compete in fairs for the highest number of varieties of several traditional crops, and trade recipes for “value-added” products like jams and chips.

Other pieces in the series are concerned with language revitalization efforts that show varying degrees of promise (Welsh, Maori, Occitan, Zapotec, Ladino). A story about the Zápara people of Ecuador documents the case of a community facing seemingly impossible odds. The Zápara, once the most numerous people of Ecuador’s Amazon region, had come close to extinction, with only four remaining speakers of their language. Efforts to record and recover the language are underway, but the process is fraught with threats, the most urgent being the presence of oil concessions in their area of the Amazon.

In the words of one producer, the common thread in several of the stories presented in the series is that ‘the central drama, as defined by the protagonists themselves, was how to conserve what was unique to them as a people while moving forward economically.’ The Worlds of Difference website includes streamable audio, photographs, articles, and a sampling of quotes about cultural change. Especially poignant are the words of Octavio Paz, Mexican poet: “The ideal of a single civilization for everyone implicit in the cult of progress and technique impoverishes and mutilates us. Every view of the world that becomes extinct, every culture that disappears, diminishes a possibility of life.”