In News and Views,What's New 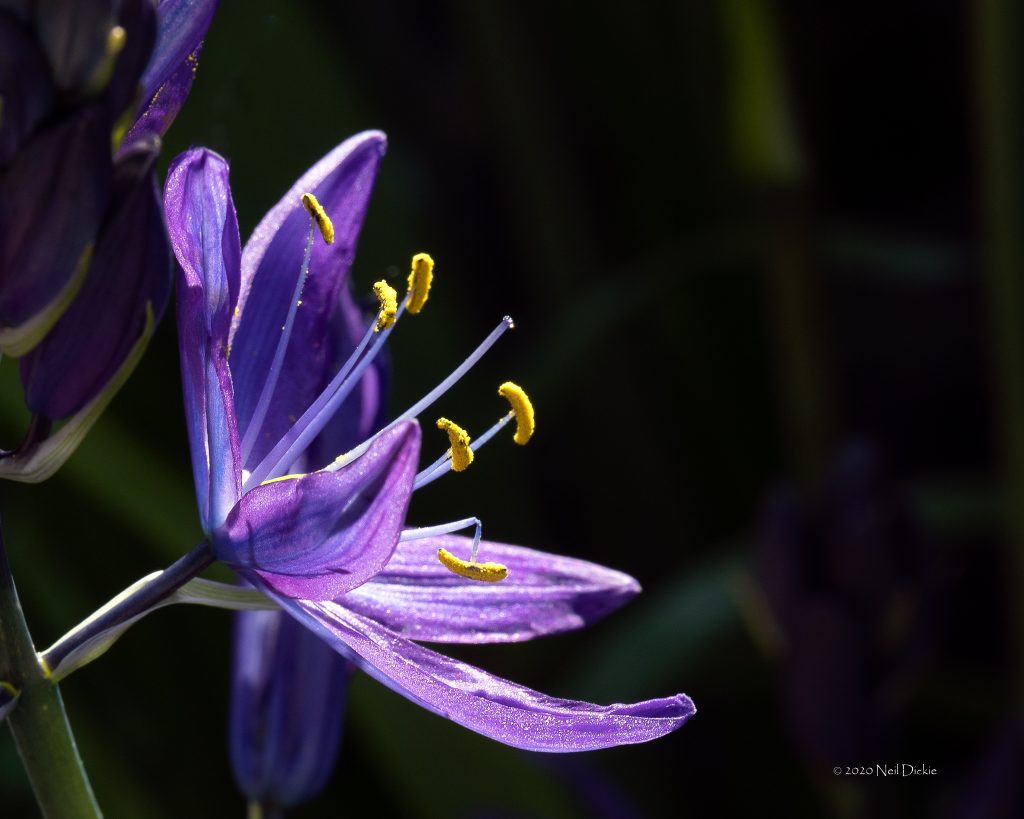 Ahh, camas lily season. From California up to southern British Columbia—where we’re located here at Terralingua—the Garry oak meadows are awash in waves of beautiful purple-blue flowers. Not just another pretty bloom, the camas holds a place of special significance to the Coast Salish peoples of the Pacific Northwest. The plant’s edible bulbs were a starchy staple of the local First Nations diet up until the early 1900s.

In the wake of European colonization, camas lily cultivation and harvests were suppressed along with many other Coast Salish traditions. In recent years, however, there has been a resurgence in camas awareness and education. In places like the traditional territory of the Lekwungen people (Songhees)—the area we now refer to as Victoria, British Columbia—Indigenous leaders are increasingly sharing their traditional knowledge of camas in guided walks, pit cook demonstrations, and more. While the current COVID-19 pandemic may curb some of those events this year, we wanted to honor the flowering of this sacred plant with some photos, background, and resources for further reading.

Traditional Indigenous Use of Camas

The flowering camas lily has star-like, periwinkle buds and grows up to 60 cm tall, according to Sierra Club BC. For millennia, the Coast Salish peoples have harvested the onion-like bulbs and steamed them in pits. When the bulbs cook, they develop a healthy sugar called “inulin.” Cooked camas bulbs are said to taste a bit like baked pears and can be eaten whole or dried and pounded into a flour.

In pre-colonial times, Indigenous peoples not only harvested camas lily plants, they carefully cultivated them in family plots using traditional techniques to promote bigger bulbs and larger crop yields. They also took great pains to weed out a similar, toxic bulb known as “death camas,” which can grow nearby. Pit-cooked camas fed families, but it was also a valuable commodity and an integral part of trading culture. 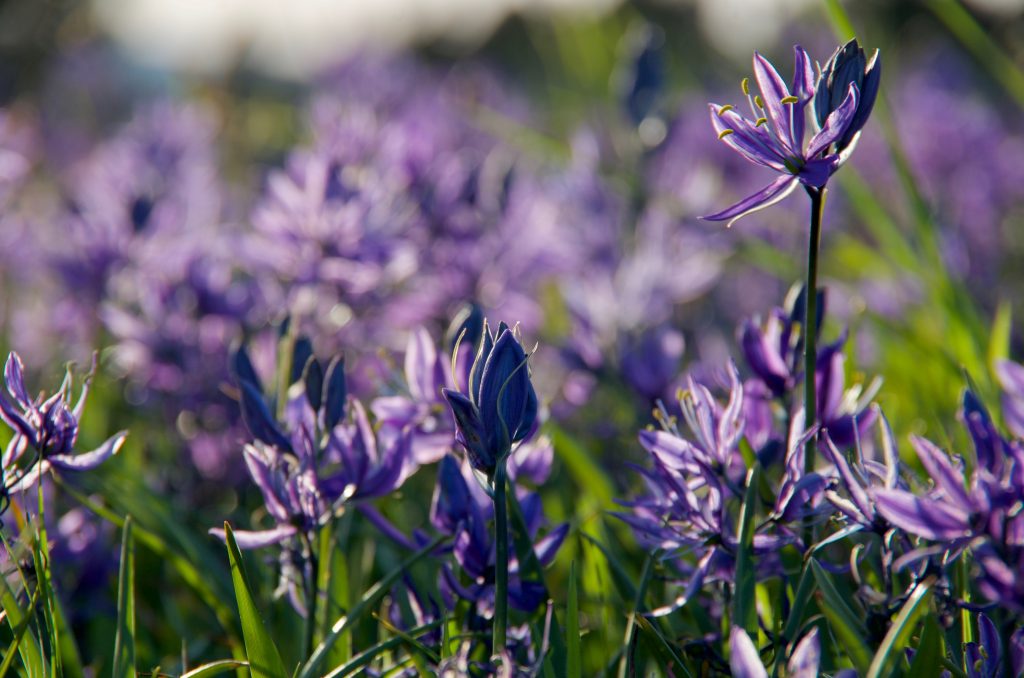 In the past decade, the University of Victoria introduced the camas lily to its campus grounds as part of the Kwetlal Restoration project. (The word kwetlal means “camas” in Lekwungen, the language of southeastern Vancouver Island’s Coast Salish people.) In a related paper entitled Restoring the Traditional Ecological and Cultural Ways of Coast Salish Land, the authors wrote:

Traditional foods, like camas, are fundamental to preserving cultural identity and improving “health, food security, and food sovereignty of First Nations communities (Beckwith, 2002).” Accompanying these foods is a set of “language, belief systems, songs, stories, and social structure” integral to their culture (Turner, 2008). Also inextricably linked with traditional foods is information of the habitats in which these plants grow and an understanding of the technology needed for harvesting, cultivating, and preparing the foods. Therefore, by restoring these foods, First Nations may begin remembering the traditional ways that were lost to European colonization and their cultural, and ecological significance. (2014, Anne Franklin, Dave Manning, Blair Lekness, Kelly Toots, Laura Tassie, Brainne Knox, and Kayla Ginter)

The camas harvest and pit cook “is part of who we are,” says Cheryl Bryce (Songhees). “It helps with reinstating traditional First Nation roles, restoring the environment and ecosystem, and connecting with ‘territories’.” 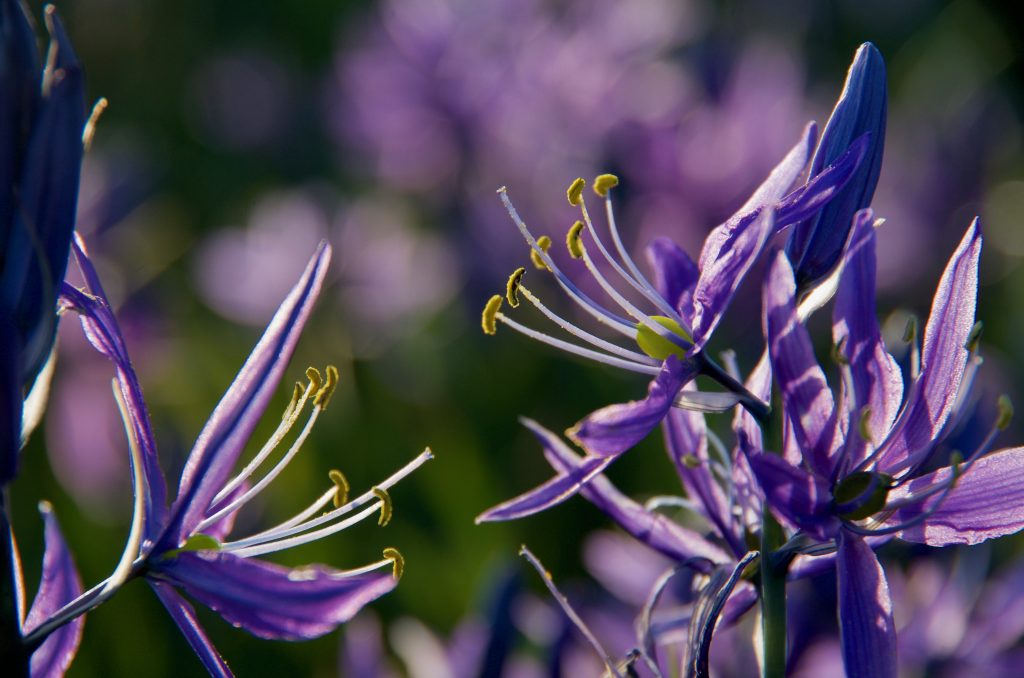 “A Blossoming Time at ÁLEṈENEȻ (Homeland) | Reclaiming W̱SÁNEĆ (Saanich) Place Names on the West Coast of Canada,” Langscape, 2016: Read about the revitalization of traditional plant use by W̱SÁNEĆ (Saanich) people in the PEPÁḴEṈ HÁUTW̱ native plant nursery at the ȽÁU,WELṈEW̱ Tribal School on the W̱JOȽEȽP (Tsartlip) reserve in Brentwood Bay.

“Restoring Camas and Culture to Lekwungen and Victoria,” Focus Magazine, 2006: An interview with Lekwungen Cheryl Bryce.

If you live in camas country, be sure to head out and explore your local camas lily meadows while they’re in bloom. And don’t forget your camera!