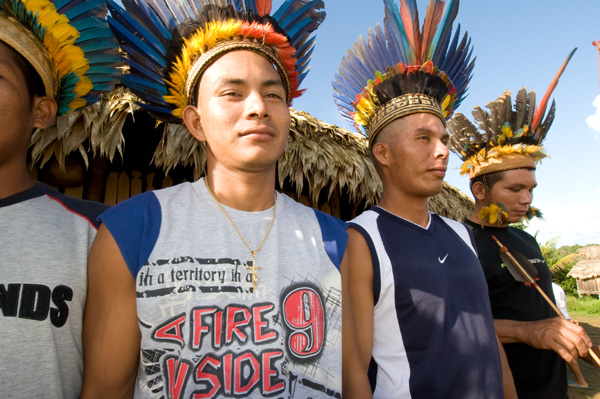 Over the past two years, we at Terralingua have been sharing with you more and more biocultural diversity stories by Indigenous writers and artists—particularly from the younger generations—on the pages of Langscape Magazine and through our digital and social media channels. We think it’s critical for diverse Indigenous voices to be heard and want to involve even more young Indigenous authors worldwide. We know you share this vision, too, so that’s where you come in! As part of our debut Giving Tuesday campaign, you can sponsor young Indigenous writers and artists who join our Indigenous Youth Storytellers Circle—a project we launched last year in collaboration with the United Nations International Year of Indigenous Languages.

Giving Tuesday (December 1st, 2020) is a time when charities, companies, and individuals join together and rally for their favorite causes. By participating in that initiative, we’re making it easy for you to support these young Indigenous authors. You can empower young writers or artists by donating an honorarium, by donating to our Indigenous Youth Storytellers Circle, or simply by contributing to Terralingua as a whole. I invite you to take a look at our Giving Tuesday page to learn more about how you can participate in this effort.

Many thanks to the Terralingua family for your efforts to bring out youths’ hopes and concerns for the future. We are very happy to be heard. —Ceren Kazancı (Laz, Turkey/Georgia), Langscape, Vol. 8

Young Indigenous Voices Matter!
All around the world, Indigenous youth are taking the lead in revitalizing their ancestral languages, reasserting their cultural identities and traditions, reclaiming traditional ecological knowledge and stewardship of their lands and marine environments, confronting racism and discrimination, and addressing existential challenges like climate change and the global pandemic. These young people are strong, resilient, and determined and have stories to tell!

Since 2019, we have published 42 stories, poetry, photo essays, videos, and artwork authored or co-authored by 48 Indigenous youth from 21 countries. All are full of passion and wisdom and deliver a wealth of thoughtful perspectives on what it means to be young and Indigenous and proud of it today. They offer much-needed inspiration, insight, and hope. And the numbers tell us that our readers are greatly appreciating these amazing stories: nearly 8,000 reads so far, and counting!

2019 was truly a huge year for language, and I’m grateful to have played a small part in it. Haw’aa for the work you do for everyone involved in this journey!—Skil Jaadee White (Haida, Canada), Langscape, Vol. 8

For us, it’s been a heartwarming and uplifting experience to interact with and get to know these talented youth and to learn about the enthusiasm, creativity, and courage with which they pursue their endeavors. And the feedback we’re receiving from them tells us that it’s been a rewarding and empowering experience for them to collaborate with us. In fact, several of the youth who contributed to the Indigenous Youth Storytellers Circle last year were so enthusiastic that they have been repeat contributors this year! Others told us that they have felt encouraged to continue to reconnect to their ancestral languages and cultural traditions, fight for their communities’ rights, write, film, study, do research—and share their perspectives and their stories with the world.

We want to keep the flow of Indigenous youth stories going—and that’s where you can help! Check out our Giving Tuesday campaign to see how you can directly sponsor a young Indigenous writer/artist or support our IYSC initiative as a whole. This project is close to our hearts—and especially to mine. Join us in making a difference for these visionary youth, and for the world, by participating!

With deep appreciation and warmest thanks,