Righting the Incalculable Wrongs of Indian Residential Schools in Canada

For the past twenty-five years, Terralingua has stood for the vital value of biocultural diversity—the interlinked diversity of life in nature and culture. Biocultural diversity lies at the very core of our awareness-raising mission and of our vision for a just, equitable, and sustainable world. Our work has shown that the global distribution of biodiversity largely overlaps with that of cultural and linguistic diversity, and that Indigenous Peoples represent perhaps 80% to 85% of the world’s cultural and linguistic diversity, with most of the world’s biodiversity being found in their traditional territories.

Crucially, we have pointed to what we call the “converging extinction crisis” of biocultural diversity—the simultaneous rapid loss of biological, cultural, and linguistic diversity due to the ecologically and culturally destructive impact of dominant economic, political, and social forces. For that reason, we have been calling for a “biocultural extinction rebellion” as an urgent existential imperative to counter that crisis. And, recognizing that Indigenous Peoples have borne the brunt of the assault on biocultural diversity, we have steadfastly supported their rights, as enshrined in the UN Declaration on the Rights of Indigenous Peoples. 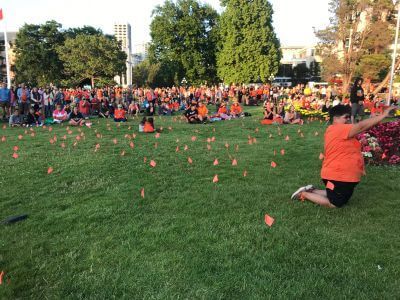 The July 1, 2021, gathering organized by First Nations in Victoria, BC, to remember Indigenous children who died while attending residential schools. Photo: David Rapport

No matter how aware we or anyone may be, however, of the long-standing attacks on Indigenous Peoples’ languages, cultures, lands, and identities, nothing can mitigate the sheer horror of the realities that have been emerging in Canada, where Terralingua is located: the recent and ongoing discoveries of hundreds of unmarked graves—many of them thought to be of children—on the grounds of several former Indian Residential Schools. 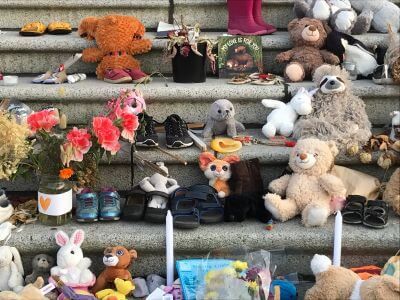 The steps of the BC Provincial Legislature at the July 1, 2021, First Nations memorial gathering. Photo: David Rapport

In late May, the Tk’emlups te Secwépemc First Nation in the interior of British Columbia (BC) announced that graves holding what appeared to be the remains of 215 Indigenous children had been identified by ground-penetrating radar on the site of the former Kamloops Indian Residential School, Canada’s largest residential school, which was operated by the Catholic Church from 1890 to 1969. 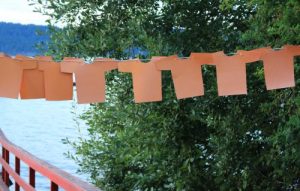 In June, another gruesome announcement: using the same technique, the Cowessess First Nation of Saskatchewan identified as many as 751 unmarked graves on the site of the former Marieval Indian Residential School, also run by the Catholic Church from 1899 to 1997.

Just since early July, two more heart-wrenching discoveries. Two Ktunaxa First Nation communities near Cranbrook, in southeastern BC, announced that 182 unmarked graves were found near the site of the former St. Eugene’s Mission School, operated by the Catholic Church from 1912 to 1970. And—closest to home for us at Terralingua—the Penelakut First Nation of Penelakut Island (formerly Kuper Island), one of BC’s Southern Gulf Islands just to the north of us on Salt Spring Island, revealed that over 160 unmarked graves were identified on the grounds of the former Kuper Island Industrial School. That’s the residential school that was sometimes described as “Canada’s Alcatraz”, with reference to the infamous penal colony in California, because of its similarly isolated and hard-to-escape-from location. It operated from 1889 to 1975, originally run by the Catholic Church with federal government funding and then, from 1969 to 1975, directly by the federal government. 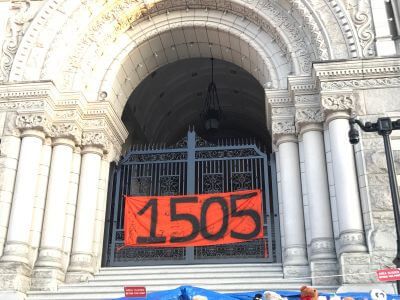 The memorial for Indigenous children at the BC Provincial Legislature on July 1, 2021. Photo: David Rapport

The shock waves have been going around the world, as it becomes ever more apparent what happened to innocent Indigenous children in Canada over many decades: wrenched from their families and communities, they were forcibly placed in ruthless institutions, where they were subjected to all kinds of physical and sexual abuse, where their languages, cultures, spiritual beliefs, sense of identity, and connections to their ancestral lands were brutally taken away from them, and where eventually many of them died—of disease, hunger, mistreatment, and, likely, broken hearts—and were callously disposed of as faceless, nameless “discards.” 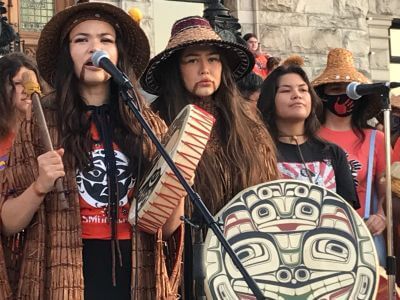 Young First Nations women from the Women Warriors group rallying the crowds at the July 1 gathering in Victoria, BC. Photo: David Rapport

First Nations in Canada are grieving, feeling the pain of generations lost, of young lives taken—lives that couldn’t come to fruition and carry forward the wisdom and spirit of their ancestors. We at Terralingua, humbly and compassionately, are grieving with them. How many other horrific discoveries like these will follow, nobody can say as yet. But nobody can remain indifferent at this point, or continue to put their heads in the sand, as many non-Indigenous persons have been wont to do over the years, preferring not to know. 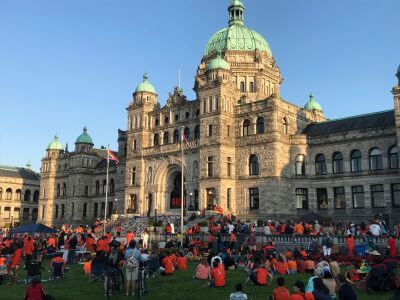 Attendees on the BC legislature lawn for the July 1 gathering. Photo: David Rapport

And, indeed, non-Indigenous Canadians have been awakening to this brutal reality, on which much of Canadian history was built. On July 1, our usual day of “national celebration” was replaced by a much more somber reflection on that past and on the many systemic ways in which it continues into the present. Crowds of people wearing orange shirts with an “Every Child Matters” slogan flooded public gathering led by First Nations, to reflect on these past events and their implications for the present and the future. 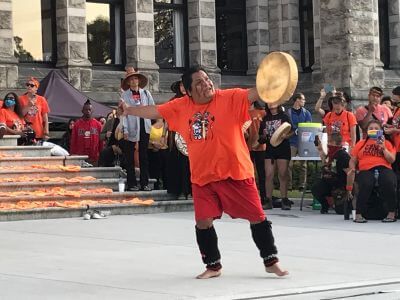 But the worst is likely yet to come. First Nations in Canada know that what has surfaced so far is only the tip of the iceberg. Their own oral histories speak of thousands and thousands of children who, once taken away to residential schools around the country, disappeared, never to be seen or heard from again. They are calling for much more in-depth investigations to be conducted on these and many other sites to determine the full nature and extent of what happened in Canada’s residential schools.

This much must be clear: there is no possible reconciliation in Canada without coming to terms with the reality—and the inhumanity—of the events surrounding residential schools in this country. And if real healing is to take place—and if real, lasting change is to be made— what needs to happen above all is this: the Canadian Government and the Catholic Church must come forth with all they know about what happened; and they must come definitively clear about their roles in, and take full responsibility for, what Canada’s Truth and Reconciliation Commission recognized unequivocally, already back in 2015, as amounting to nothing other than cultural genocide.

With deep appreciation and warmest thanks,