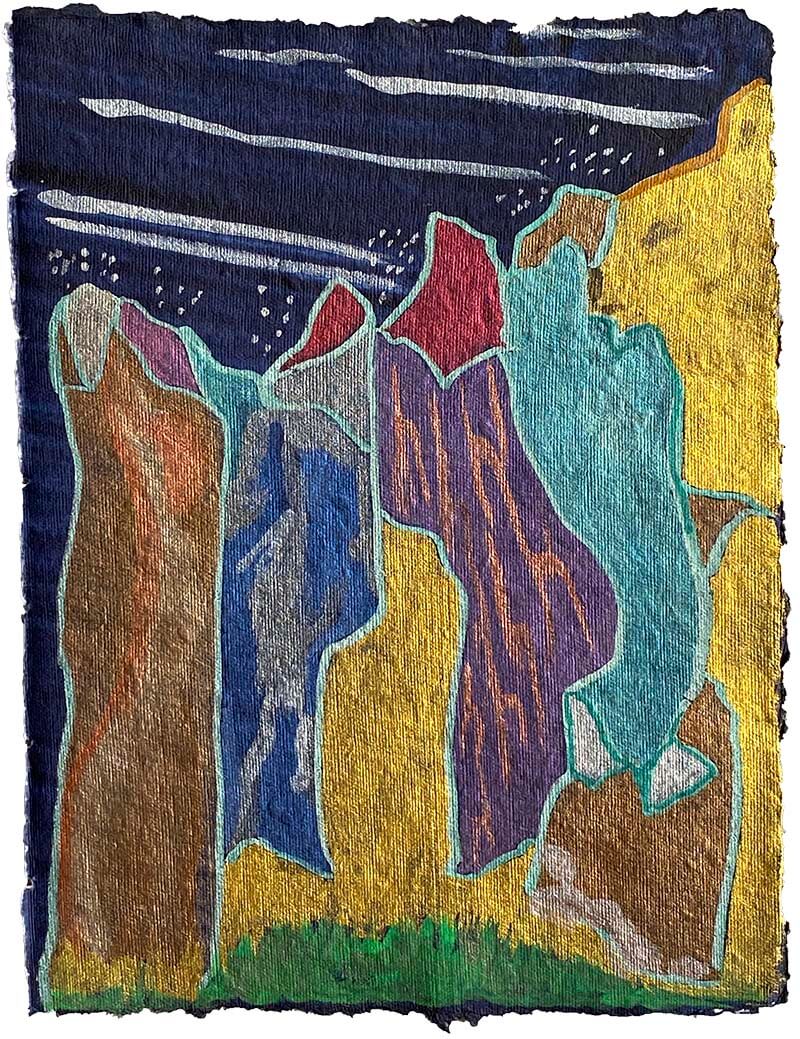 From Rose Imai’s The Children’s Series: #1, First 215 Revealed,” metallic watercolor on indigo rag paper. Reproduced with permission. As described by Rose, “The spirits of 215 Native children rise from their mass grave to transform the world’s consciousness.” There is nothing more powerful than love to bring about reconciliation. Art: Rose Imai

“I could hand you a braid of sweetgrass, as thick and shining as the plait that hung down my grandmother’s back. But it is not mine to give, not yours to take. Wiingaashk belongs to herself. So I offer, in its place, a braid of stories meant to heal our relationship with the world.”

Indigenous traditions to tell or just a few words of my language to sing. How to say words like beaver, house, child. How to greet or thank with those words that I don’t have. Welcoming you in my biological mother tongue to celebrate my past. “I would have it all, if only I knew where I came from,” a person adopted during the Sixties Scoop in Canada would say. Taking place between the 1950s and the 1980s, the Sixties Scoop was the practice of taking, “scooping up,” Indigenous children from their families and communities to place them in foster homes or put them up for adoption.

The Sixties Scoop was the practice of taking, ‘scooping up,’ Indigenous children from their families and communities to place them in foster homes or put them up for adoption.

From childhood, belonging to a family and then to a group of friends is fundamental to the development of each and every individual. The importance of personal identity to a culture and a language finds its answer in the family. Knowing the roots of one’s parents, grandparents, and even beyond nourishes identity. If identity and culture are pillars in building a person’s sense of self, what about someone who has gone through an adoption? When the puzzle has missing pieces, one can experience a profound personality imbalance. 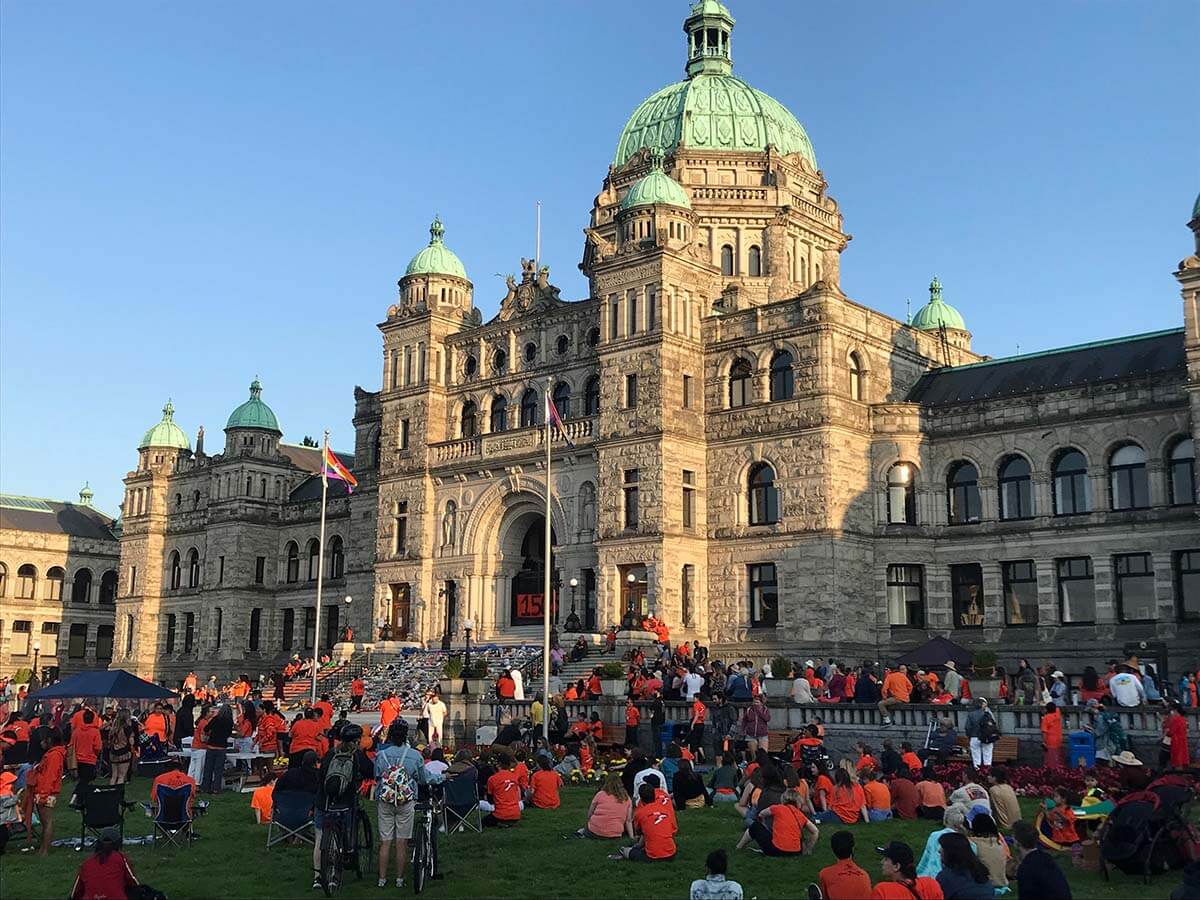 Attendees on the British Columbia Provincial Legislature lawn gather on July 1, 2021, to remember the Indigenous children who died while attending residential schools in Canada. Over several decades, Indigenous children were taken from their families and placed in residential schools. Their languages, cultures, spiritual beliefs, sense of identity, and connections to their ancestral lands were taken away from them, just as they were from adopted children during the Sixties Scoop in Canada. Photo: David Rapport

Here we take our first step in exploring personal stories of Indigenous persons who, as children, were adopted during the Sixties Scoop in Canada — successfully for some and more problematically for others. This initial exploration allowed us to hear accounts from three different people (we use fictitious names): the stories of Mike and Ginger, who were adopted under Canadian law, and the story of Don, who adopted a child according to the customary form of adoption — one that is practiced by First Nations in Canada as well as by Māori in New Zealand and other Indigenous Peoples. This type of adoption takes place according to traditional customs and may vary from one Indigenous nation to another or even from one community to another.

Mike. An Innu native, Mike was legally adopted by a Québec family in 1952, at the age of two. As an only child, he was happy in all simplicity in this family. In April 2002, after a few months of searching, he found his biological mother (or, as we much prefer to say, his “natural mother”), and they shared a lot of good times together. This cherished family time would have never taken place without Mike’s thorough investigation. Mike fully embraces his Indigenous origins and now helps people find their biological families via genealogy.

Ginger. Of Mi’kmaq descent, Ginger has a more complex history. Legally adopted in 1953, she lived in a family where violence was very much present. She tells us that this left her with physical consequences following beatings received at the hand of her adoptive father during that period of time. Ginger was recently reunited with her biological family but admits that she would have preferred not to know them. Still, she has fully accepted her identity, which she now experiences on a daily basis, and embraces the knowledge and awareness of her origins. Despite this break with her native origins, she says that from a young age she adored wolves and would have liked to go live in the woods with the animals. Today, she happily attends powwows and the water purification ceremony.

Don. A First Nations individual, Don adopted a baby girl through the so-called customary adoption: “If a child needs a family, I welcome him/her, no papers needed.” And so Don picked up the child and brought her to his house to introduce her to her adoptive siblings. “This is the nature of an extended family,” he tells us; there you go, without further formalities, the child became an official member of Don’s and his spouse’s family. This form of adoption has been recognized in the Civil Code of Québec since 2018 but has been practiced since time immemorial among Indigenous Peoples here and elsewhere. 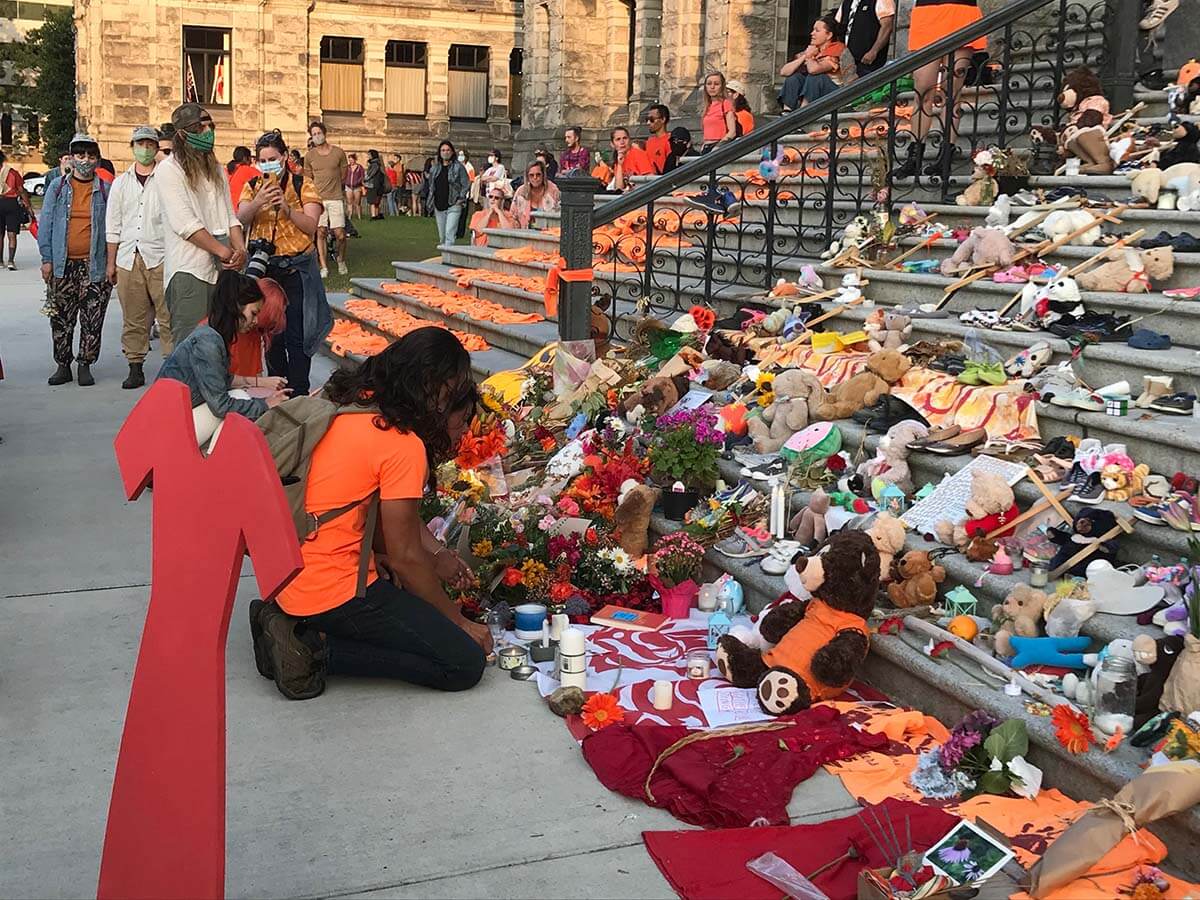 The steps of the British Columbia Provincial Legislature at the July 1, 2021, First Nations memorial gathering. Many Indigenous children in residential schools died from all sorts of abuse and, likely, broken hearts. Photo: David Rapport

What emerges from these three invaluable interviews is that identity is the basis of a fundamental stability on which personality is built. Although sometimes the discovery of one’s biological parents can be so disappointing as to make the child not want to see them again, what remains is finally having found the deep roots of a tree that had been cut down. We might say it is a reconciliation with a part of oneself. As in Ginger’s case, it is possible not to have contact with one’s biological family, whose members may remain strangers without compatibility, but once one has access to the richness of one’s newly found people and culture of origin, everything changes. And the feeling of incompleteness finally disappears.

Identity is the basis of a fundamental stability on which personality is built.

Being adopted in one’s own country, knowing that one’s native culture may be around the corner but not having access to it, is a burden that some bear daily. Not knowing one’s origins is a source of deep suffering, which is sometimes very hard even to define. The puzzle that sometimes took many years to put together is now complete. Meeting with one’s biological family can become a means of self-repair or healing, as long as access to birth records is possible and, above all, truthful. 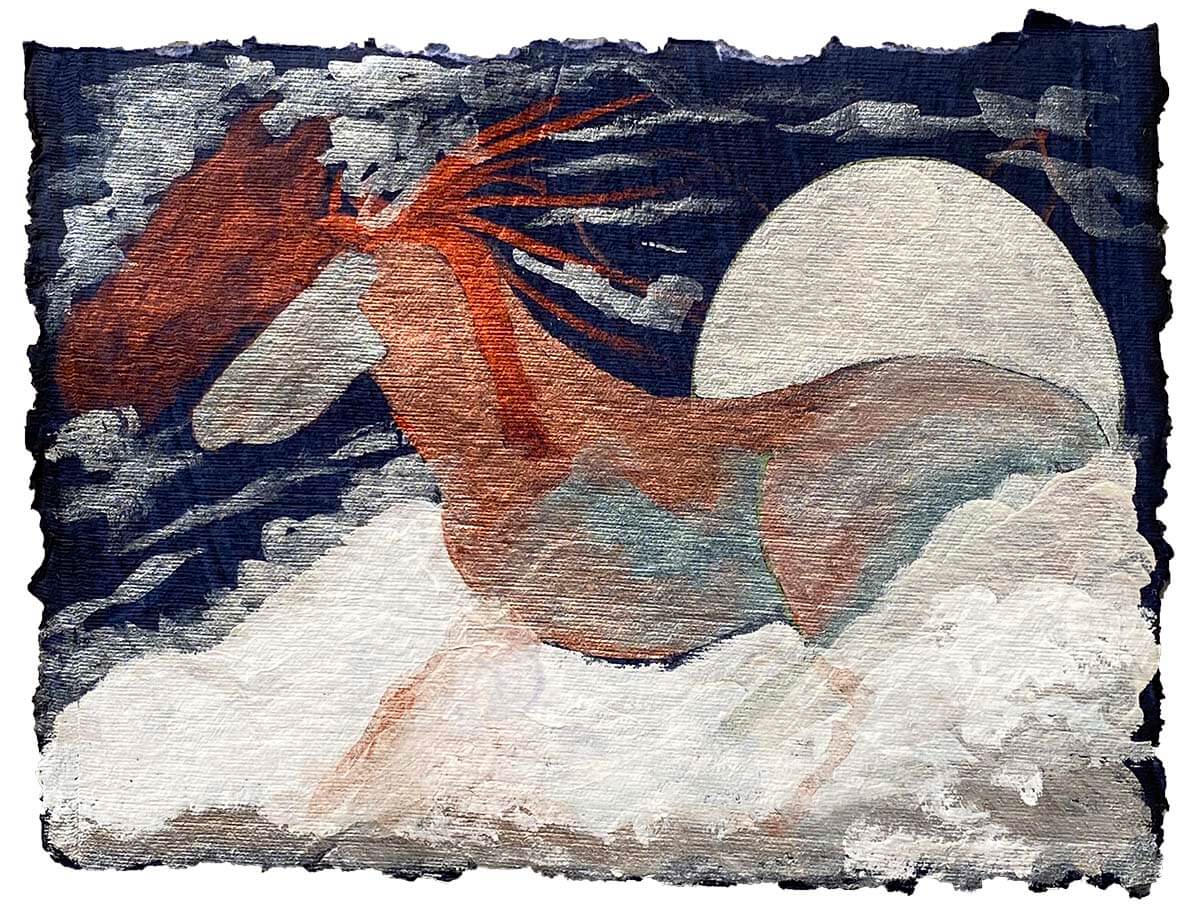 From Rose Imai’s The Children’s Series: #7, “The Horse of the North — The Healing Winds of Truth,” metallic watercolor on indigo rag paper. Reproduced with permission. Rose’s Horse of the North, one of the Four Horses of Healing, “brings the cleansing winds of truth.” Telling the truth is essential to redress the wrongs of the past. Art: Rose Imai

We think that Indigenous adoption stories deserve narrative honesty. And there is nothing more honest than the truth every adopted child carries within him, her, or them. There is nothing more powerful than love to bring about reconciliation or even create alliances. In the words of Richard Kistabish, a residential school survivor, it is time to redress the wrongs of the past by “recognizing that past, telling the truth, and admitting mistakes.” We believe that touching on this dark aspect of Canada’s past can help people recognize that we are not apart from our (natural) Mother (Earth), but rather we are part of Her existence: a vibrato of knowledge, love, traditions, languages, and cultural beats that shouldn’t be wrenched from people’s hearts. 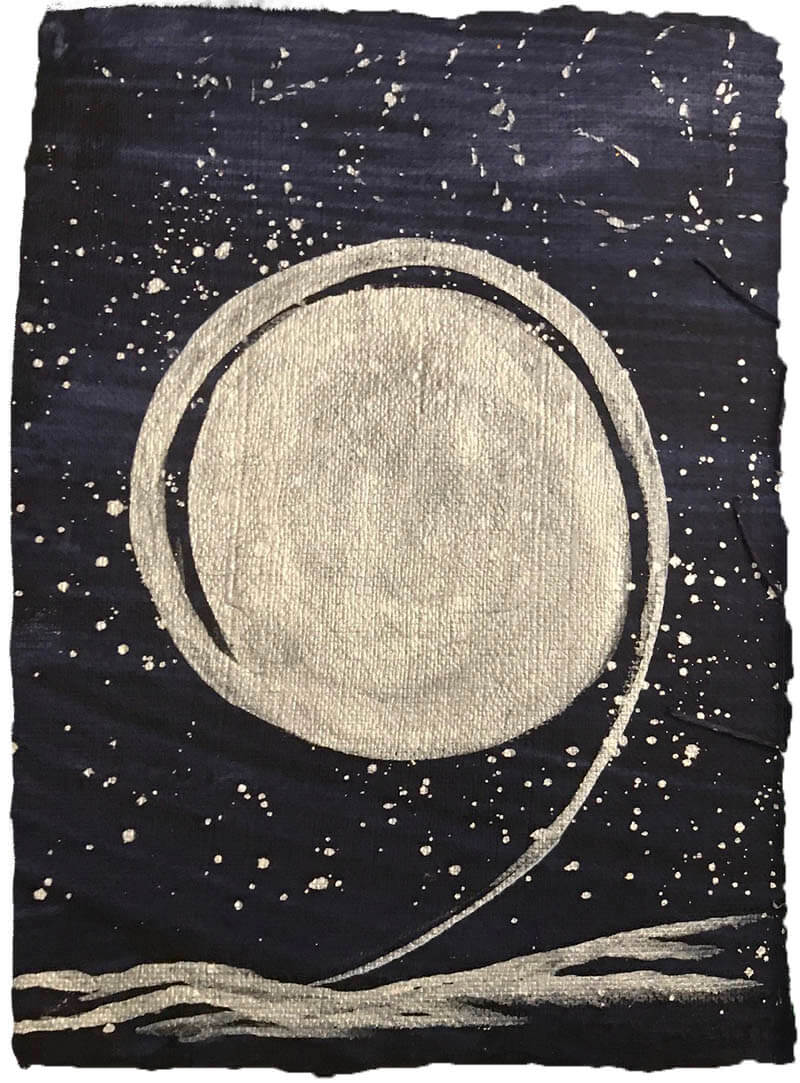 There is nothing more powerful than love to bring about reconciliation.

For more information or to conduct research on parents of origin or adopted children, consult the Québec government’s website (available in both English and French), as well as the Mouvement Retrouvailles (Reunion Movement) website (available in French), a nonprofit organization existing since 1983, which is geared toward people in the post-adoption and reunion sector, and whose main objective is the right for all to know their origins.

Disclaimer: The opinions expressed in this essay are solely those of the authors. They do not purport to reflect the opinions or views of all Indigenous people in Québec and the rest of Canada.

Marie-Émilie Lacroix (Messinak Kameltutasset) is a proud Innu woman of Mashteuiatsh, Québec, Canada. She spent her life as a midwife, teacher, social worker, and user of nature’s products. She teaches Aboriginal Culture at Université du Québec à Rimouski and is very engaged in the recognition of and “reconciliation” with First Nations people. 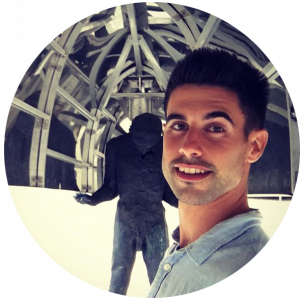 Marco Romagnoli is an Italian PhD researcher in ethnology and heritage at Université Laval in Québec, Canada. Interested in the “Other,” he has studied foreign languages, tourism, psychology, and anthropology. His research focuses on UNESCO’s intangible cultural heritage, food heritage, the Mediterranean diet, and cultural and mass tourism.