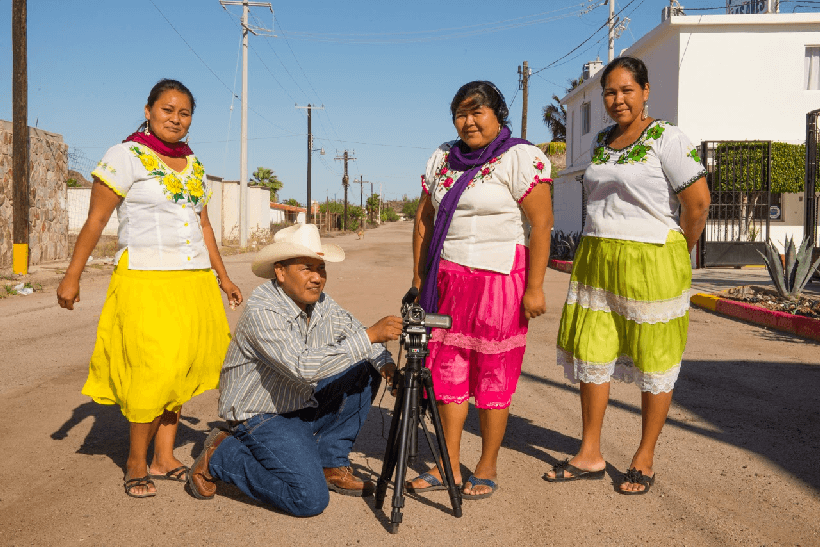 I am a founding member of the Indigenous Yaqui and Comcaac film collective, La Marabunta Filmadora, practicing participatory video (PV) across Mexico and beyond.

Since learning PV from InsightShare in 2010, we have been using it to preserve our culture and territories. Our name, translated as The Army Ant Film Collective, stands for the power of PV and our power as communities working together for justice: both are unstoppable!

The power of participatory video and our power as communities working together for justice: both are unstoppable!

We quickly realized that through PV we were able to create unity, to solve our own problems, and to celebrate ourselves. Two of our films, Victimas Del Desarrollo and Pintado La Raya, tell the story of our resistance to a gas pipeline laid illegally on our territories, while Yooram Luturia offers a version of a famous Yaqui oath, which reminds each member of the tribe of their commitment to protect the environment and territory. 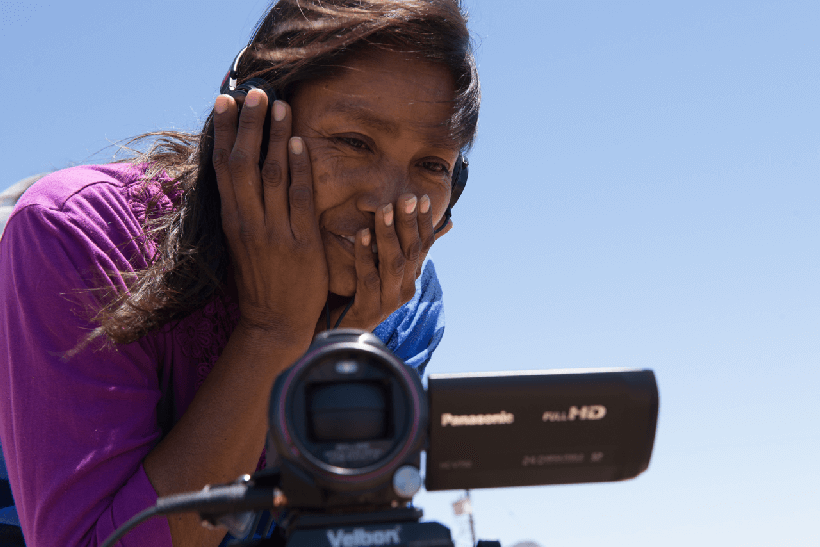 Romelia from the Comcaac team filming on the beach. Photo: Thor Morales/ InsightShare, 2015

Our films have given our communities the strength to resist abuse from governments and big companies, as well as the pride to nurture our own traditions and customs. These are powerful values that we wanted to share. So, we started passing on our knowledge to other Indigenous communities in northern Mexico (the Yoreme, Tohono O´odham, Pima, Guarijio, Comcaac, and Ralámuli).

Our aim has been to establish the first Indigenous Centre of Participatory Video in northwestern Mexico, to empower communities and strengthen our cultures and environments through locally generated media. The hub is a bridge from the Pacific Ocean to the Sierra Madre Occidental that brings our communities together for support and solidarity. 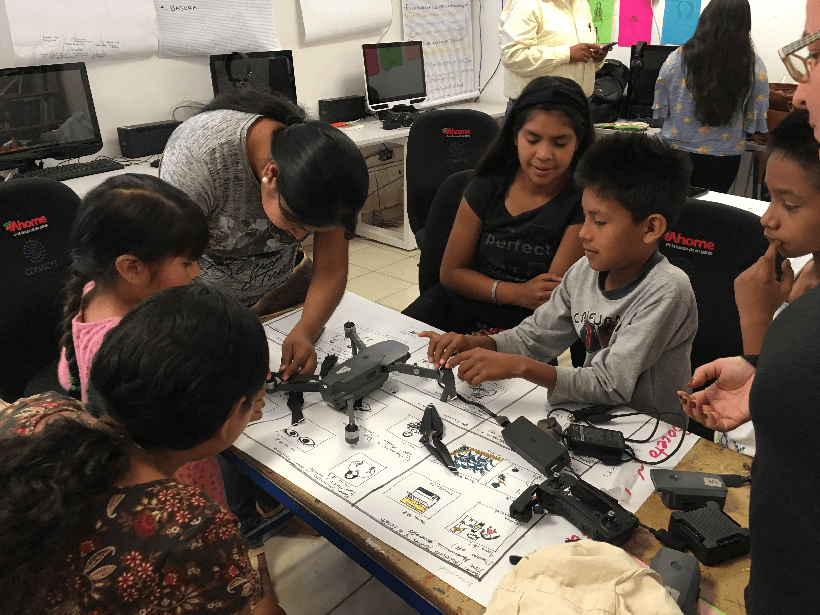 This year we held PV workshops for the Yoreme and Ralámuli communities. Each group created films about issues important to their communities.

For the Yoreme, the issue was language loss. Changing attitudes and Spanish-speaking bias in their area has led to a weakening of their native language to the brink of erasure. So, the community made the film Yoremnokki and learned about their mother tongue by interviewing community elders.

.
The Yoreme youth were inspired to be proud of their culture, to preserve it, and to renew it. One of our trainees said, “I really liked this training because we became aware of how important it is to speak our native language [Yoreme]. We filmed in our community and interviewed elders who still speak our mother language. I, as a kid, I would like to learn to speak Yoreme language.”

The Yoreme youth were inspired to be proud of their culture, to preserve it, and to renew it.

On the other hand, the Ralámuli trainees wanted to talk about acculturation and territory — two very deep and complicated topics. The prevalence of these two themes in most Indigenous communities across the globe is astonishing. Culture and territorial loss seem to be inextricably linked, being the cause and effect of one another.

By teaching other communities how to use PV, we hope to foster an unstoppable movement of “Ants,” who can share the stories of their communities and help others do the same. 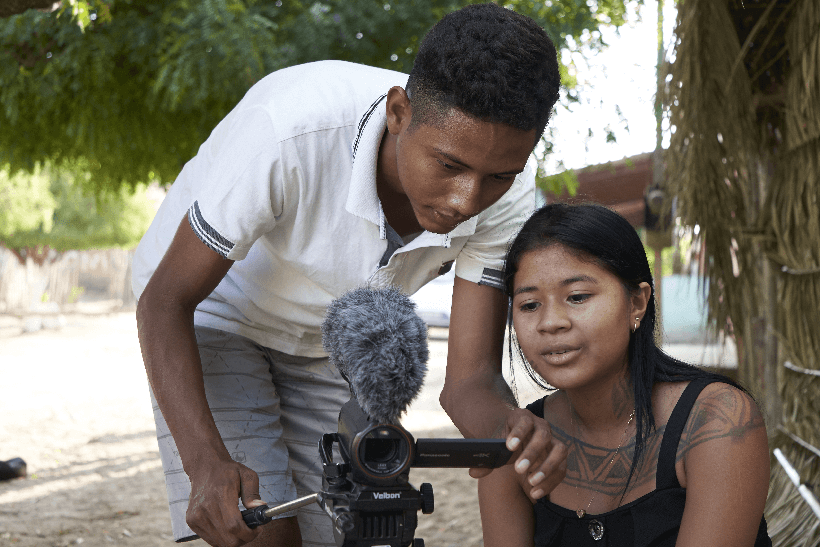 Junior Guajajara and Ranielly Guajajara (they are not siblings: all Guajajara people use the same last name) practice camera-use during a show-and-tell game. They were the youngest participants in the training, but that didn’t stop them from unfolding their creativity and leaving aside shyness to fully engage in all participatory video activities. Photo: Thor Morales/InsightShare, 2019

As I write this I have just returned from Arariboia Indigenous Territory, in Brazil, home to the Guajajara people. There, I co-facilitated a participatory video training with my colleague Anabela Carlon. In partnership with Mari Corrêa from Instituto Catitu and Midia India (an Indigenous media collective), we identified the need to have a workshop at Zutiwa village. The training was mainly for Guajajara youth: six men and four women. They focused on one of the most important festivities of the Guajajara: A festa da Menina Moça, the rite of passage from girl to maiden. The trainees created a film about that beautiful and powerful celebration. As of this writing, the film is only in the Guajajara language. After the proper consent process, trainees will explore if the film can be shared on a global scale. 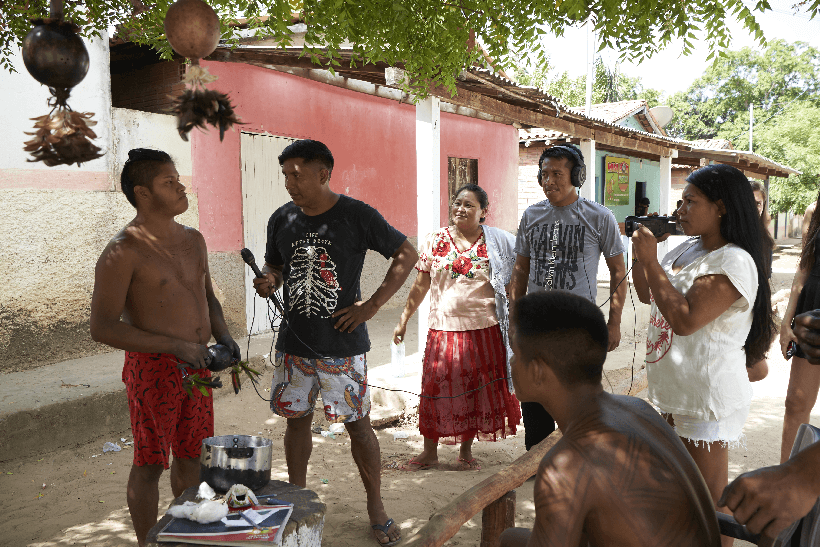 Flay Guajajara, from Mídia India, leads his team in interviewing a singer, who despite being young is considered a master, while he prepares the jenipapo ink for painting the bodies of young singers who will chant through the night for the Menina Moça festival. Photo: Thor Morales/InsightShare, 2019

This is the first international hub started by La Marabunta Filmadora. We left a video kit so that participants can continue using video to address and support ongoing challenges and needs.

In October 2019, La Marabunta Filmadora will travel to Ecuador to share our knowledge of PV with Indigenous women’s groups and have outreach events in Quito. This trip has been made possible through a partnership with the ALDHEA Foundation. At a time of unprecedented threats to Indigenous Peoples across the Americas, these trips, and the alliances they will build, carry the hope of moving forward with dignity and strength.

Eusebia Flores, or Chevy as she is better known, is a Yaqui woman from Tetabiate, one of the eight Yaqui villages. She is a traditional ecologist and an active member of the Aki Nawa Co-Op, a community-based organization committed to reviving traditional food consumption through a locally owned artisanal food company. Eusebia is also a member of La Marabunta Filmadora and has found PV to be a key factor in uniting the Yaqui people against common enemies. Her work is devoted to biocultural conservation and sparking local pride and dignity among young Yaqui men and women.

Chevy has spread the use of PV across northwestern Mexico, not only working with her fellow Yaqui people, but with another seven tribes that face similar challenges and threats. She is fluent in both Yoem Noki and Spanish. She has facilitated participatory trainings internationally with the Guajajara people of northeastern Brazil and with Cofan women in Ecuador.