Biocultural Diversity on the Border: The Yaylas of the Western Lesser Caucasus

by Soner Oruç and Ceren Kazancı

Men, in general, are busy with taking care of herds. Here, an Afghan shepherd is working due to shortage of people in Turkish yaylas. Photo: Soner Oruç, 2017

In 2016, we set off on a journey to the highlands (yaylas) of the Georgia–Turkey border region. We were very excited and eager to learn new things. We wanted to breathe some fresh mountain air, drink from pasture springs, and get in touch with the pastoralists of the region and observe their transhumance practices. Too, we wanted to learn the local names of wild plants and their usage. We did this because we had decided to make a long-term commitment to documenting the unique traditional plant knowledge of the pastoralists and their life in harmony with nature before they disappear. This photo essay shares some of what we have seen, heard, smelled, and touched; what we have learned; and how we felt, over the last two years in the yaylas. This is the story of what the mountains have told us. 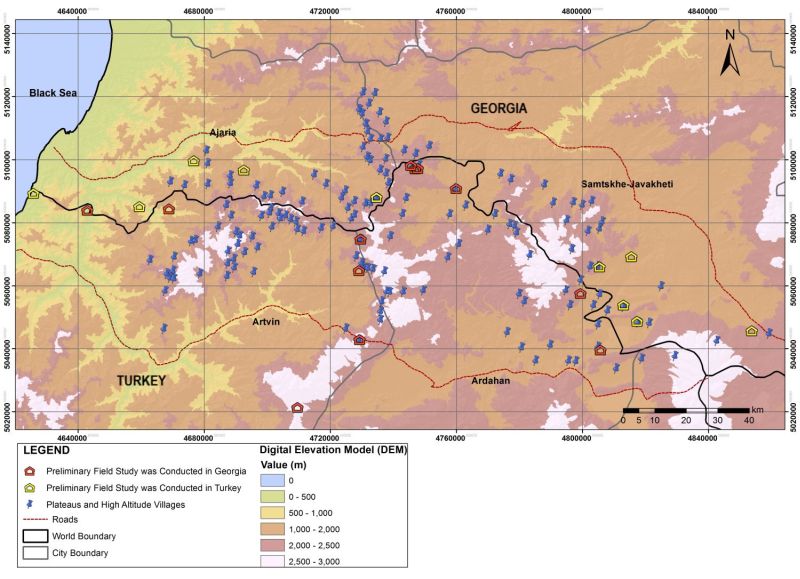 Distribution of yayla settlements along the Georgia–Turkey border in the Western Lesser Caucasus region, a biodiversity hotspot that is also home to numerous cultures. Map: Peren Tuzkaya, 2016

This is the story of what the mountains have told us. 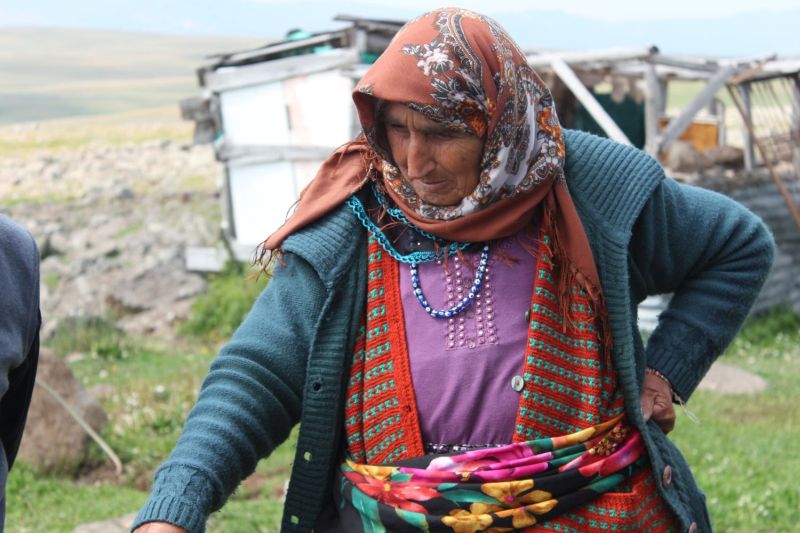 A Hemshin woman in Bilbilhan Yayla — the most multicultural area we met with in Turkey. Photo: Zeynep Türkmen, 2016

The mountains of the Western Lesser Caucasus are part of one of the thirty-six biodiversity hotspots of the world. They are home to diverse plant species and high levels of endemism. Moreover, various ethnolinguistic groups  —  Turks, Georgians, Kurds, Lazi, Megrelians, Hemshins, Armenians, Russians, Azeris, Greeks, the Lom people, Lezgins, Kists, and Abkhazians  —  inhabit this region. Every year when the snow starts to melt, the meadows blossom with flowers and seem to call out to the herds. That is the time for transhumants to move with their herds from their villages to the highland plateaus, which they call “yayla” or “yeyla.” 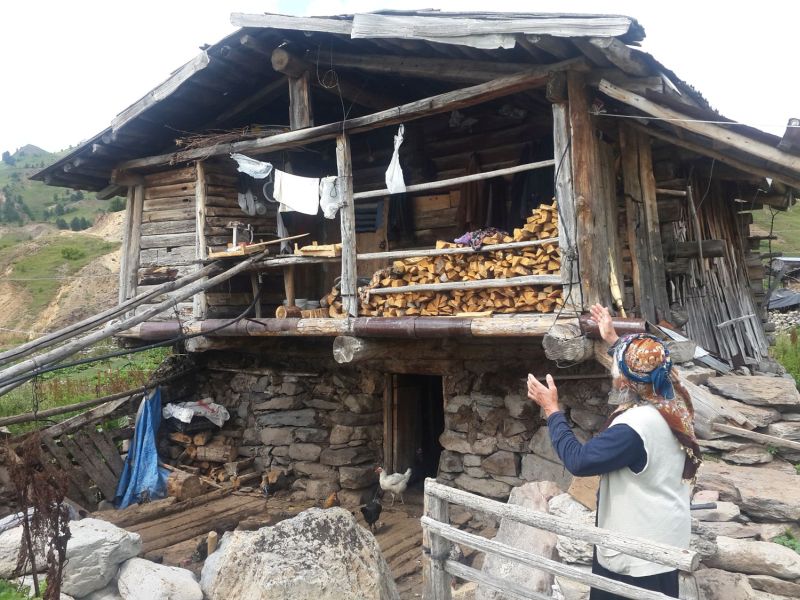 Some of them live in houses made of wood and stone; others, in tents. The vital figures in the yaylas are the women. These working women are called “şaşorti.” They are responsible for all the housework, including milking and making traditional butter, yogurt, and cheese. Plant richness in the region provides plentiful natural resources for subsistence. This, in turn, has created a fund of wisdom about plant use, as food, medicine, and construction materials. Every house smells like a mixed spruce (nadzvi) and fir (sotchi) forest. We couldn’t leave any house without having tasted a wild vegetable dish (phkhali in Georgian) and wild berry marmalades or compotes. Nor were we allowed to forget the cheeses and creams, of course. 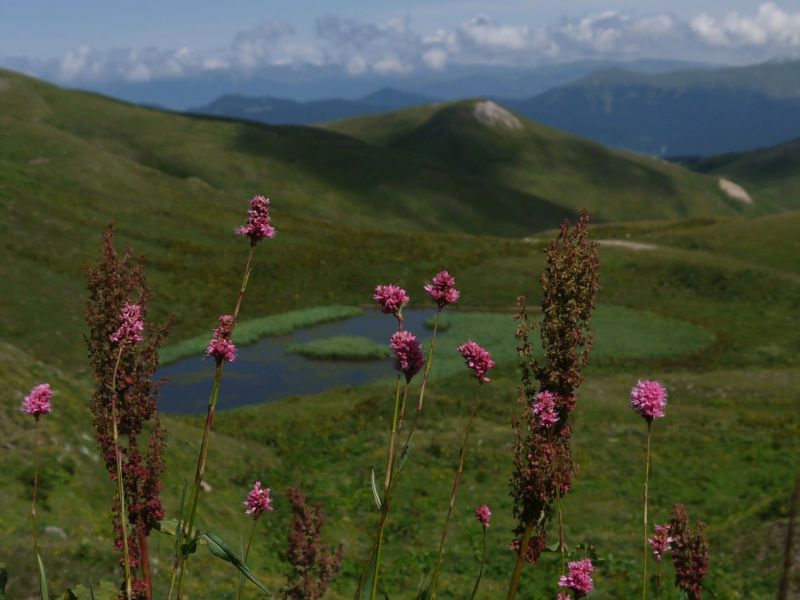 Polygonum carneum — a culturally important plant in yaylas. People collect it and make it into a traditional soup that is eaten together for healing. Photo: Soner Oruç, 2017

Here it is said, “Many civilizations have arisen in these mountains. Many bridges have been constructed, many bridges demolished. Many houses have been built, many houses went to ruin.” This land has witnessed many wars, migrations, and even exiles. Maybe that is why it is such a multicultural and multilingual region. The cultural and linguistic diversity of this area has enabled intensive knowledge and experience exchange among communities, which ended up creating a diverse pool of traditional knowledge about life. Yet the question of which came first  —  Did the region’s biodiversity entice different cultures to settle here, or did it help create them?  —  seems impossible to settle. In any case, it is obvious that biocultural diversity has promoted resilience and collective adaptation to life in this land. 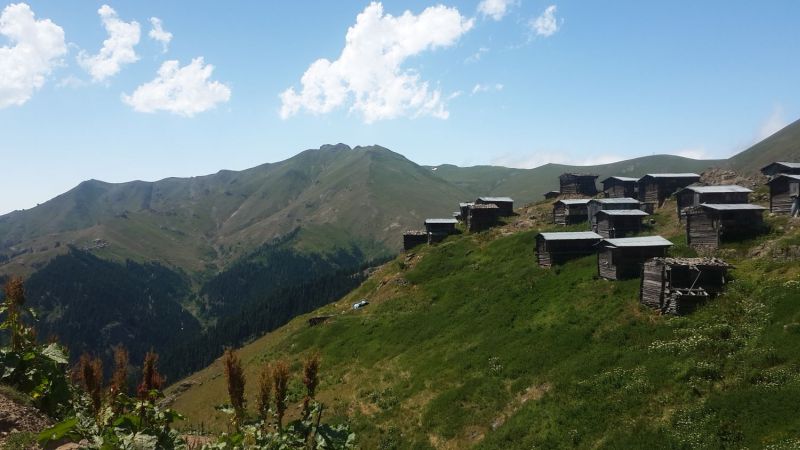 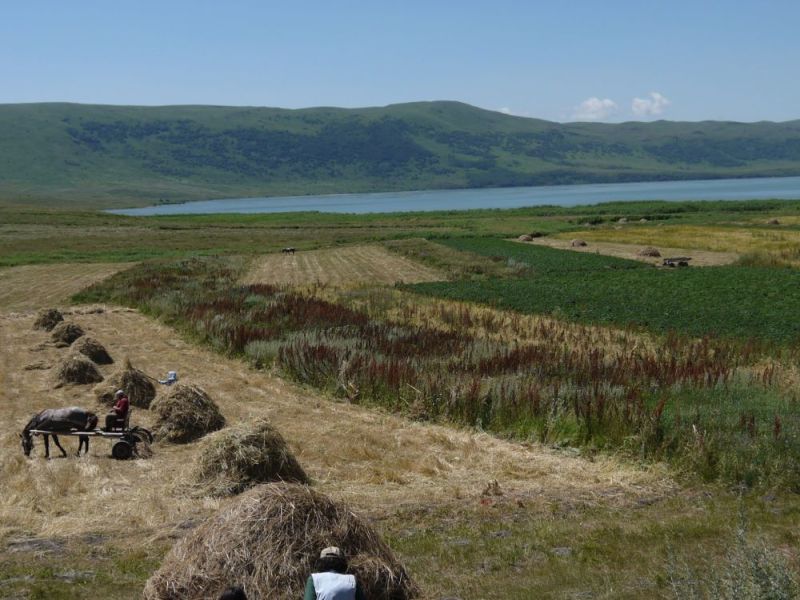 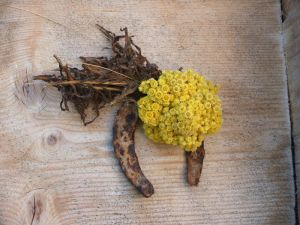 Double good-luck symbols: a horse shoe and immortelle flower on the door of a yayla house in Goderdzi Yayla, Georgia. Photo: Soner Oruç, 2017

People in the yaylas are aware of the rich diversity of life around them. They appreciate the fresh air, the clean water they have, and the importance of the forest and meadows for their healthy life. They call themselves lucky. On the other hand, most of them recognize how the environment and the lifestyles that depend on it have dramatically transformed over the last thirty years. New wide roads, huge dams, climate warming, and out-migration of young people are the main challenges they have faced. During this period, the population of most of the yaylas have decreased by at least fifty percent on average.

While we were disappointed to see only one family, or none at all, in some yaylas, fortunately we have memories of more positive encounters to keep our hope alive. One morning, we met a group of people near our camping area. We learned that they had come from a faraway big city and to their yaylas for two or three days for what they call (in Turkish) the Yayla Pancarı Festivali. Although they have given up their transhumance life, they told us that they have been organizing this festival for five years now. To witness this small but valuable step towards maintaining traditions and contact with nature made us very happy and hopeful.

In one of our other trips, we met with a shepherd called Mürsel eme in Balgöze Yayla-Ardahan. We enthusiastically admired his knowledge and perception of nature. He knows the names and various usages of a good many of the plant species in several languages. When we asked Mürsel eme, “How do you learn all this plant knowledge in different languages?” he said, “I have traveled over many lands. When I meet with any person, I like to learn something from him or her. When I do, I tie a knot. Later, whenever I untie that knot, I remember what I have learned from him or her.” 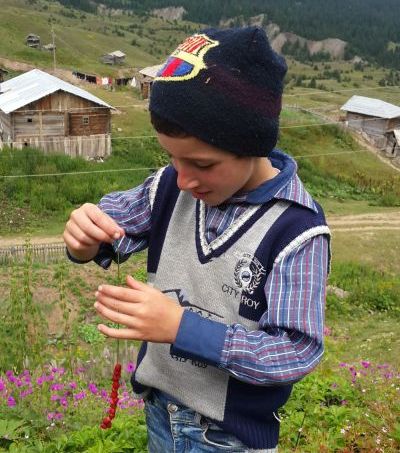 A child beading wild strawberries (marts’q’vi, çiğelek) for later eating in Adjara, Georgia. At one time, it was common for each şaşorti to bring a child with her to the yaylas. He or she helped the grandmother and experienced the culture with her. Photo: Soner Oruç, 2017

We consider ourselves lucky to meet with such people. We understand how vital it is to stay in contact with people who have provided us with information and continue to document their wisdom and stories. When we returned in 2017, we became concerned after we could not immediately find four of our interviewees from the first year. We wanted to see them again, say hello, and drink tea with them. Unfortunately, eventually we learned that two of them were sick and the other two had passed away! It was shocking for us. We have nothing to say except “thank you” for sharing your warmth, unique wisdom, and stories. God bless you, Atabek eme and Nazmiye aunty! This sad experience made us realize that one human being is a microcosm of a language, a culture, a body of wisdom  —  a world.

We always keep in mind the story of a weed species that the Lazi call kurum as a noteworthy example of the threats to biocultural unity. Although kurum was a main healthy food source for Lazi and Megrelians until the 1970s, nowadays it is almost impossible to find it being used in the area except as a birdseed. Its role as food for people has been erased from the land, along with the memories of which plant species are related to it, the process of its cultivation and harvest, and the bread, soup, rice, and other traditional dishes associated with it. Unfortunately, all the local words (in both Laz and Megrelian) related to this information have sunk without a trace.

Summer 2018 is coming to the yaylas. Now when we go there, we want to tie our own knot to help remind us of the new things we have learned, in the hope that it will encourage us to “be the change we wish to see” on our lifelong journey of discovering the diversity of plants, cultures, and languages  —  the diversity of life. 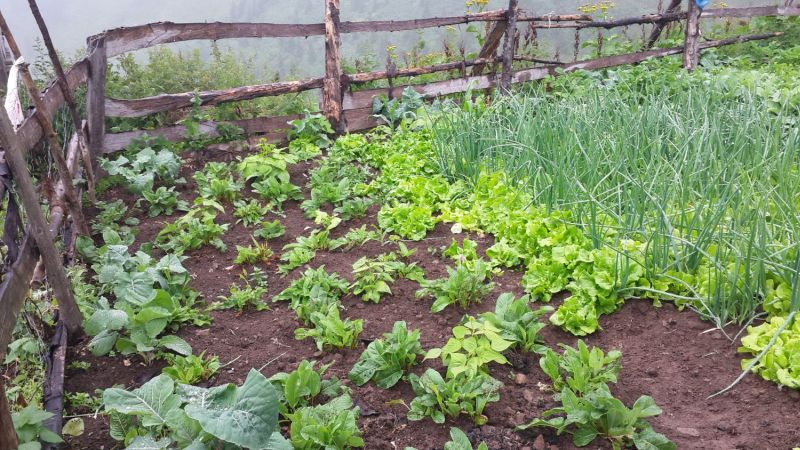 When I meet with any person, I like to learn something from him or her. When I do, I tie a knot. Later, whenever I untie that knot, I remember what I have learned from him or her. 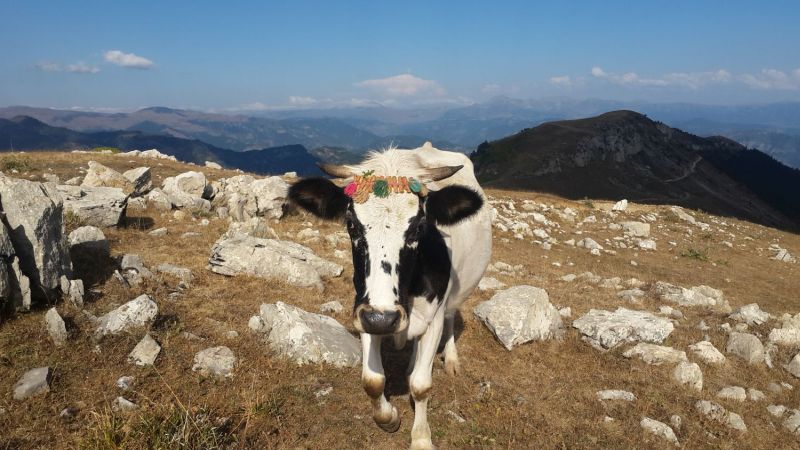 An cow ornamented with a wooden good-luck charm (“uzani” tree sticks of Viburnum spp.) against the evil eye and illness. Photo: Soner Oruç, 2017 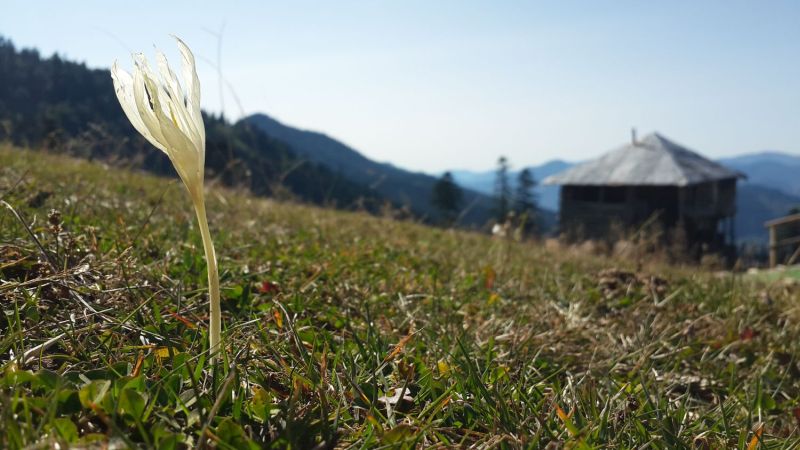 The şaşortkovan is a beautiful type of crocus that sprays the yaylas with white every fall before the snows come. The name means “the flower that expels grandmothers,” and it signals that it is time to leave the yayla! Photo: Soner Oruç, 2017 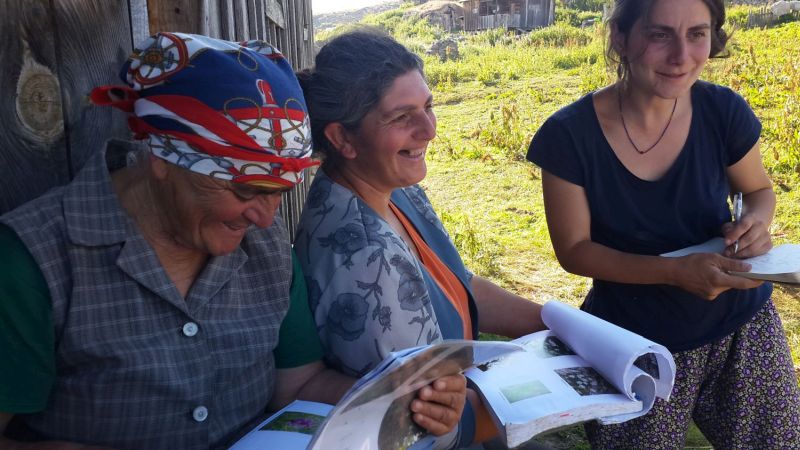 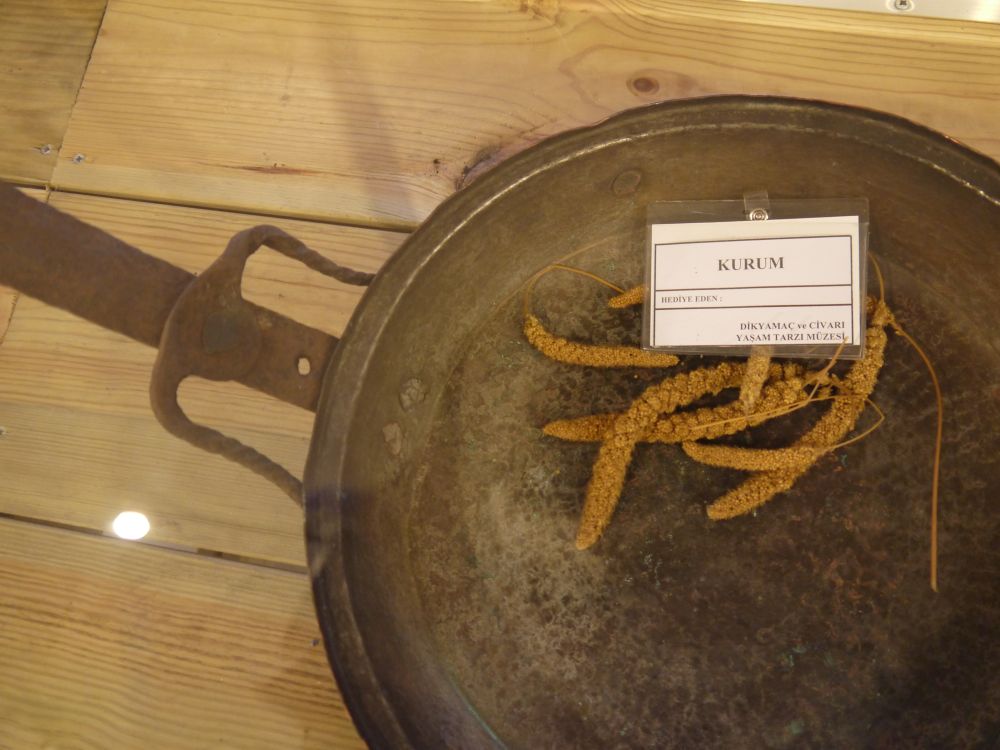 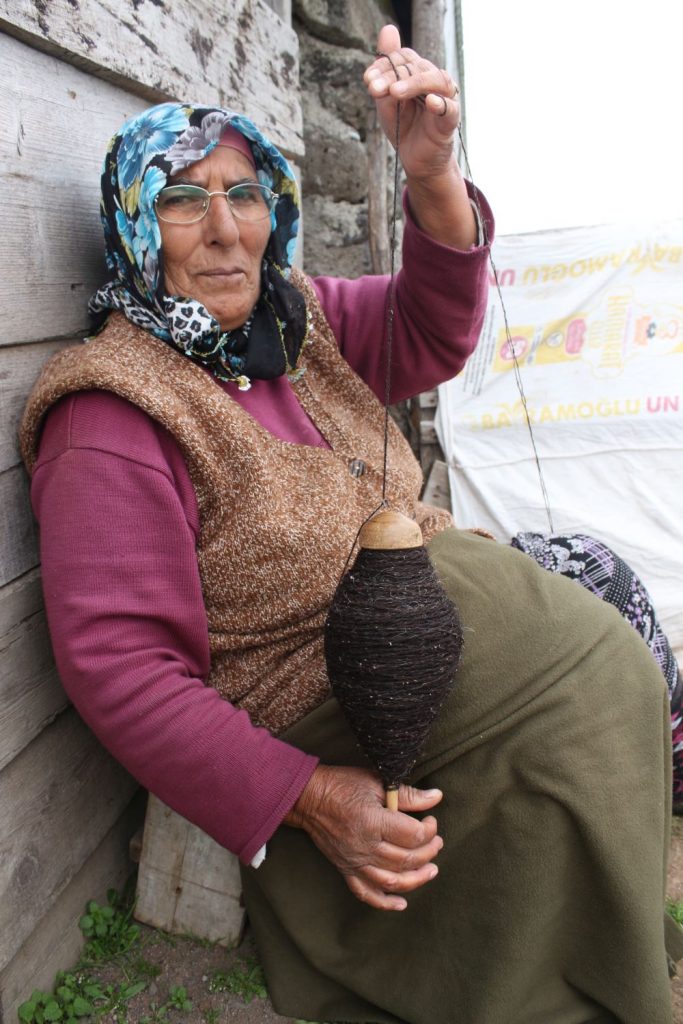