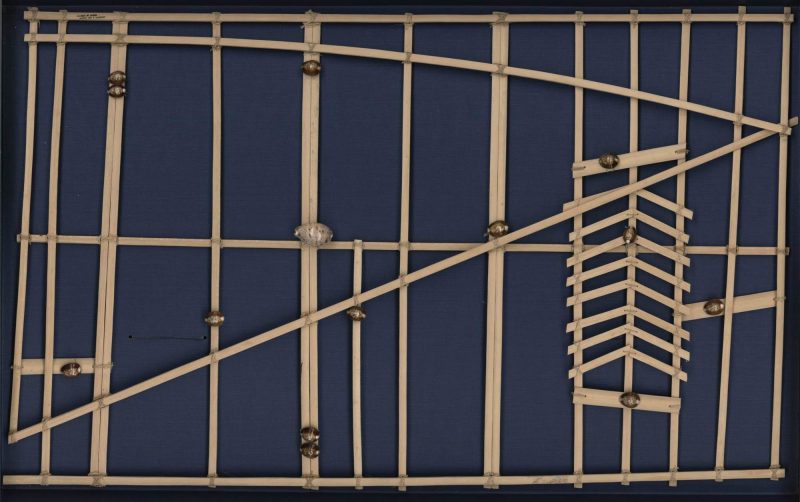 Marshall Islands Stick Chart. A rebbilib (stick chart) from Majõl (the Marshall Islands), circa 1920. The placement of the coconut fibers and shells indicates the location of islands, waves, and currents. The stick charts are the earliest known system of mapping ocean swells in the world. Retrieved from Library of Congress Geography and Map Division, http://lccn.loc.gov/2010586181

Throughout time and across cultures, the thing that is often most important to a people is land. While global industrial society’s connection to the land is waning, it remains ever-present in Indigenous cultures, despite (or perhaps in defiance of) near-constant pressure from colonial powers to separate Indigenous Peoples from their lands. This connection is at the heart of what we call biocultural diversity.

While global industrial society’s connection to the land is waning, it remains ever-present in Indigenous cultures.

Land theft has historically happened through various and often violent tactics, but as Bernard Nietschmann points out, colonization often begins with mapping the land. Colonial powers, without the consent of Indigenous Peoples, draw up political borders that, more often than not, do not reflect any real natural or cultural boundaries. They are imaginary lines that are superimposed on the land by people who have little knowledge of the land.

These people then proceed to populate their maps with names for rivers, mountains, and towns — names that are invented specifically for this purpose. Once again, these names often fail to represent anything meaningful about the local ecosystem or Indigenous culture of a precise location. They are, instead, chosen after important people (like Johannesburg, Vancouver, and Sydney), or after places from the colonial culture (like New York, New Orleans, and New South Wales). Indigenous place names, by comparison, are usually uniquely tied to a specific location — describing the landscape, or a species that proliferates in that area, or a cultural event that occurred at that location.

A portion of a map titled “Gakaabikaang Ashkibagi-ziibiing (At the Waterfalls — At the Greenleaf River)” — An east-oriented map of the Minneapolis-St. Paul area, USA, labeled in Anishinaabemowin (Ojibwe). Map: Charles Lippert and Jordan Engel, 2015

Early colonizers were likely well aware of what they were doing. As they made their way across the yet-unexplored-by-Europeans land, they kept fairly detailed records of where different tribes lived and the Indigenous names for local landmarks. Take the example of Henry Schoolcraft, an early nineteenth-century U.S. Indian Agent. He learned Anishinaabemowin (the Ojibwe language) and meticulously documented Anishinaabe place names. As a geographer, he had the privilege of deciding what future generations of European settlers would call the places he went through. Rather than passing on the knowledge of Indigenous place names, Schoolcraft was notorious for creating faux Indian place names. For example, Lake Itasca, the source of the Mississippi River, was named by Schoolcraft. It has no meaning in any language. Many people wrongly assume it is Anishinaabe in origin, but the Anishinaabe name for the lake is actually Omashkoozo-zaaga’igan, which translates to “Elk Lake.”

Schoolcraft and others like him probably thought that Indigenous place names were too long, and assumed that European settlers would not be able or willing to pronounce them correctly. In the instances when colonial settlers did adapt Indigenous place names, the names were dramatically altered: Šikaakonki to Chicago, Huāxyacac to Oaxaca, Misi-ziibi to the Mississippi River. While these differences may seem trivial to some, they represent a deliberate erasure of Indigenous cultures from the world map.

The importance of alternative cartographies cannot be understated.

Because so much of the way in which modern people understand the world is formed by geography, the importance of alternative cartographies cannot be understated. Mapmaking developed independently in many cultures across the globe. Although in decline, there is a large diversity of ways in which the physical world has been and is represented. In Majõl (the Marshall Islands), ancient mariners developed charts made from coconut fiber and shells to indicate the location of islands, waves, and currents in the Pacific Ocean. In Kalaallit Nunaat (Greenland), European explorers in the nineteenth century found pieces of driftwood carved by the Inuit to represent the shoreline of the island.

It was only during the Age of (European) Exploration that cartography began to become standardized around the world. Today, one is likely to find identical world maps in classrooms on opposite sides of the planet, in spite of very different Indigenous cultural understandings of geography. That cultural knowledge is rapidly being lost. Even though Europeans were the first people to map the world, non-European peoples do not have to forfeit their right to map their lands in their own way. Mapmaking is an art, not a science, and the rigid international standardization that has been applied to it stifles individual and cultural expression.

Even though Europeans were the first people to map the world, non-European peoples do not have to forfeit their right to map their lands in their own way. 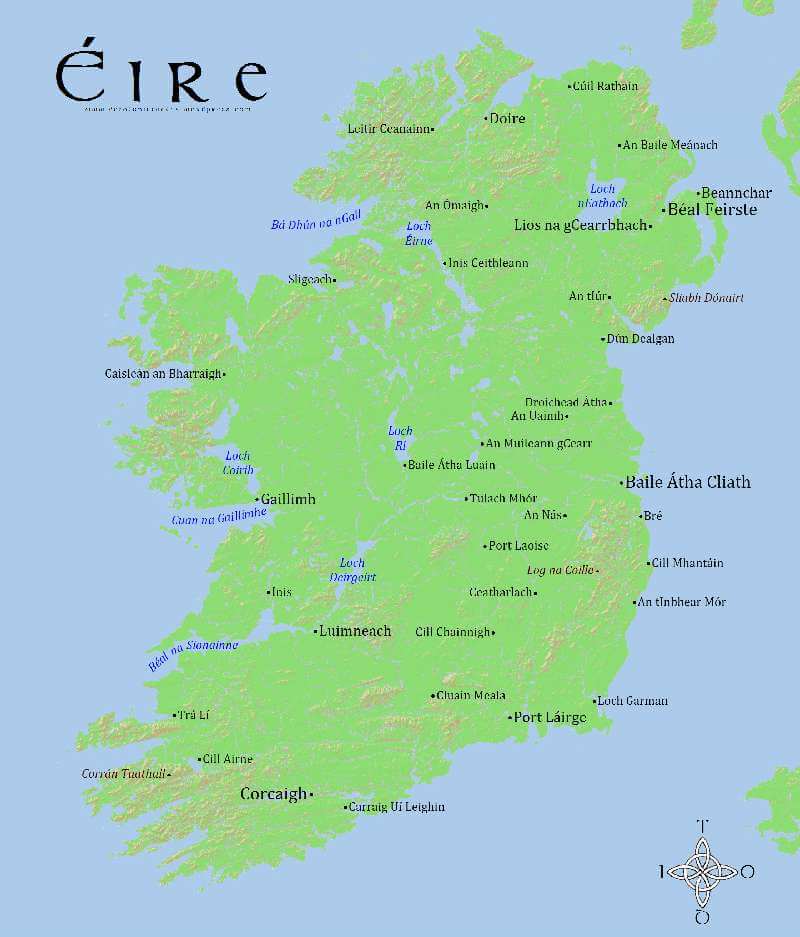 That is why, in 2014, I started a project called the “Decolonial Atlas.” The Atlas is a grassroots mapping project, the purpose of which is to bring together maps that, in some way, challenge our relationships with the environment and the dominant culture. Over the course of the project, Indigenous language speakers from around the world have contributed their knowledge to produce maps from their particular cultural perspectives. The maps are usually borderless, with the exception of some that depict bioregional borders such as basin divides. There are maps oriented in every cardinal direction, depending on the traditions of that culture. To date, we have produced new maps in Anishinaabemowin (Ojibwe), Gaeilge (Irish), Hinono’eitiit (Arapaho), Kanien’kéha (Mohawk), Lakȟótiyapi (Lakota), Māori (Maori), Meshkwahkihaki (Fox), Myaamia (Miami-Illinois), Nāhuatlahtōlli (Nahuatl), ʻŌlelo Hawaiʻi (Hawaiian), Runa Simi (Quechua), Tamaziɣt (Berber), Tsoyaha (Yuchi), and more. They range in scale from metropolitan regions to global.

These maps almost always look vastly different from standard colonial representations of the same geographic area. It is amazing how a slight change of perspective can make the land we thought we knew unrecognizable. If we take away the political borders, turn the map so that North is no longer on top, and re-label every place in its original Indigenous language, we come to realize that not only has the land been colonized, but also so have the people living on it as well. 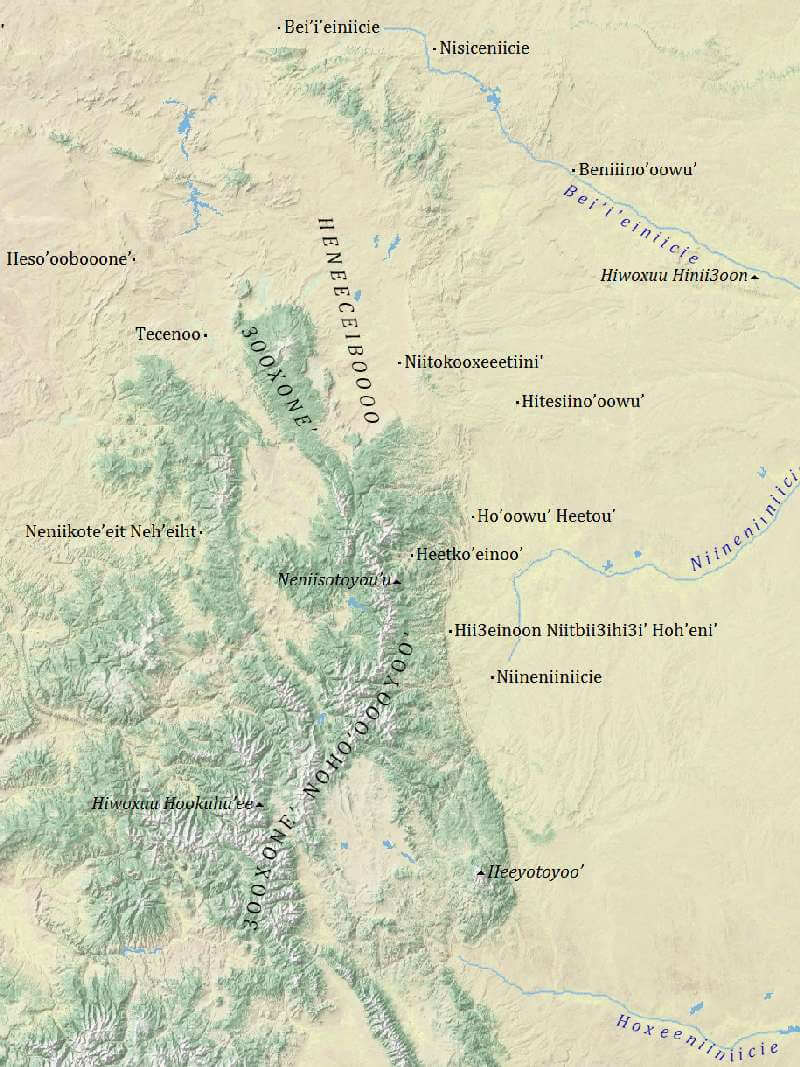 A portion of a map titled “Heeneisih’iinou’u biito’owuu (How the Lands Are Named)” — The Central Rocky Mountains, USA, labeled in the Hinono’eitiit (Arapaho) language. Research from the Arapaho Project. Map: Jordan Engel, 2015

For Indigenous Peoples, place names are a source of pride, further contributing to the revitalization of their languages and cultures.

For settlers, what we call a place determines in part our understandings of the land, as well as our attitudes toward its original owners. For Indigenous Peoples, place names are a source of pride, further contributing to the revitalization of their languages and cultures. The Decolonial Atlas is supportive of both settlers and Indigenous Peoples using our maps to help decolonize. Stylistically, the maps are colorful and artistic, with the hope that people will enjoy them enough to download, print, and hang them on their walls. They are made in an intentionally modern aesthetic, however. Antique map styles, while beautiful, convey that the subject matter is old, whereas the Decolonial Atlas asserts that Indigenous Peoples are not a footnote in history books, but are living and present in the twenty-first century.

The Decolonial Atlas asserts that Indigenous Peoples are not a footnote in history books, but are living and present in the twenty-first century.

Progress is being made. In 2015, the U.S. government officially changed the name of North America’s highest mountain from Mount McKinley to Denali. In Australia, the continent’s largest lake was renamed Kati Thanda–Lake Eyre, combining the Aboriginal Arabana and colonial English names. If enough of us insist on using these names, we can quite literally change the world. In the process, we can begin to reclaim our own cultural identities and renew our connection to the land. In this way, mapmaking is one answer to the question of how we— as individuals, as cultures, and as a species — decolonize. 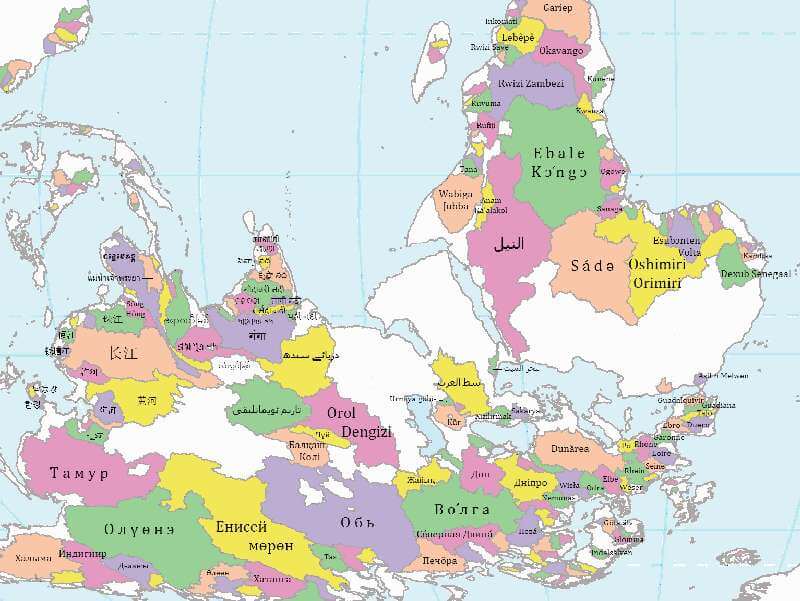 A portion of a south-oriented Map of the World’s Watersheds, labeled in their predominant Indigenous language. Map: Jordan Engel, 2015 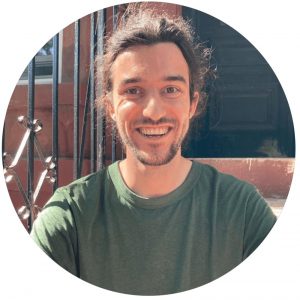 Jordan Engel is a cartographer and researcher at the Decolonial Atlas project, a virtual collaboration with Indigenous Peoples from around the world, which aims to bring together maps that challenge our relationships with the environment and the dominant culture.