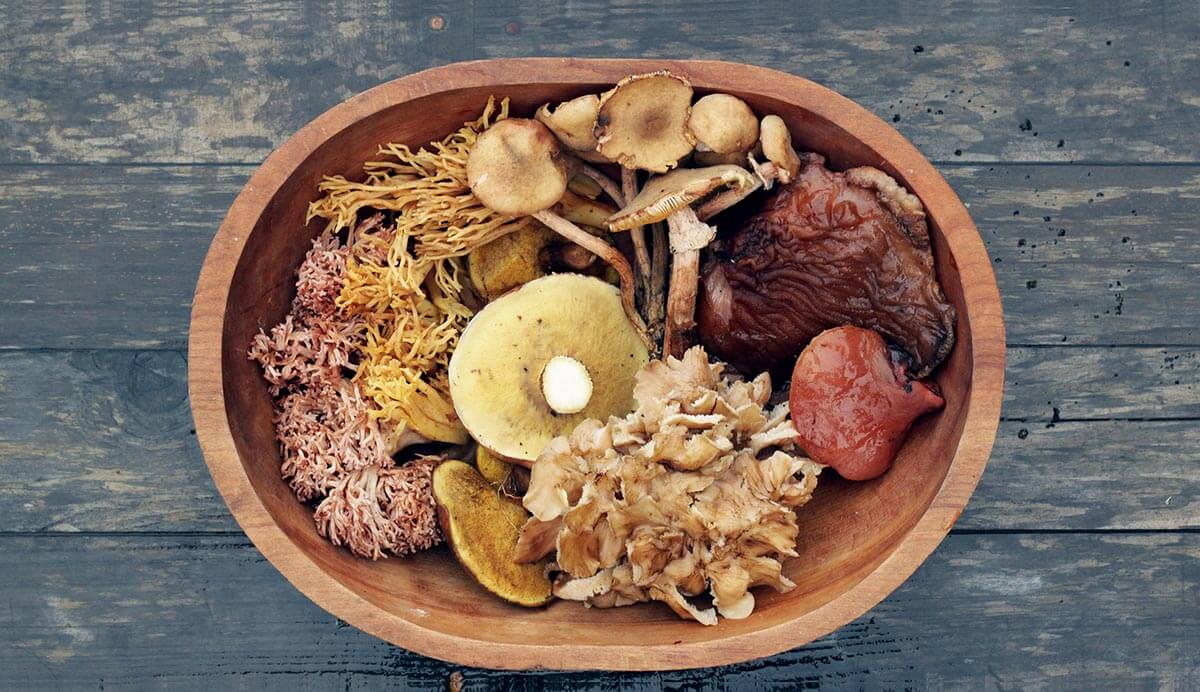 Last fall our temperate forests surprised us with many varieties of wild edible mushrooms—ready for feasting. Photo: Jesús Sánchez, 2017

What could be more local than wild, foraged foods, especially in a country where biogeographic isolation has generated high degrees of endemism? Wild foods contribute to Chile’s distinct cultural cuisine. In the south, they form an essential part of the traditional Indigenous Mapuche cuisine. They grace the plates of campesino descendants of nineteenth-century European colonizers and, more recently, those of lifestyle migrants arriving in the southern countryside in a contemporary process of counter-urbanization. The Andean Araucanía has become an important destination for these migrants who are attracted by the region’s natural amenities and cultural vitality.

The Andean Araucanía has become an important destination for lifestyle migrants attracted by the region’s natural amenities and cultural vitality.

Changes in consumption of wild foods in contemporary Chile are driven by factors as diverse as parks and people’s palates. Shifting terms of land tenure—the privatization of land and its conservation in parks—often limit or cut off access to traditional gathering areas. For centuries, Mapuche families came together in early autumn to collect nguilliu, the seeds of the Pehuen (Araucaria araucana), or monkey-puzzle tree. They came in ox-drawn carts and camped out under the ancient trees for days. When parks were established, they interrupted this tradition of gathering in many places, resulting in changes to access and, therefore, to social and economic relationships. Such shifts reinforced intergenerational Indigenous memories of being threatened or unwelcome while gathering on privatized and protected lands. 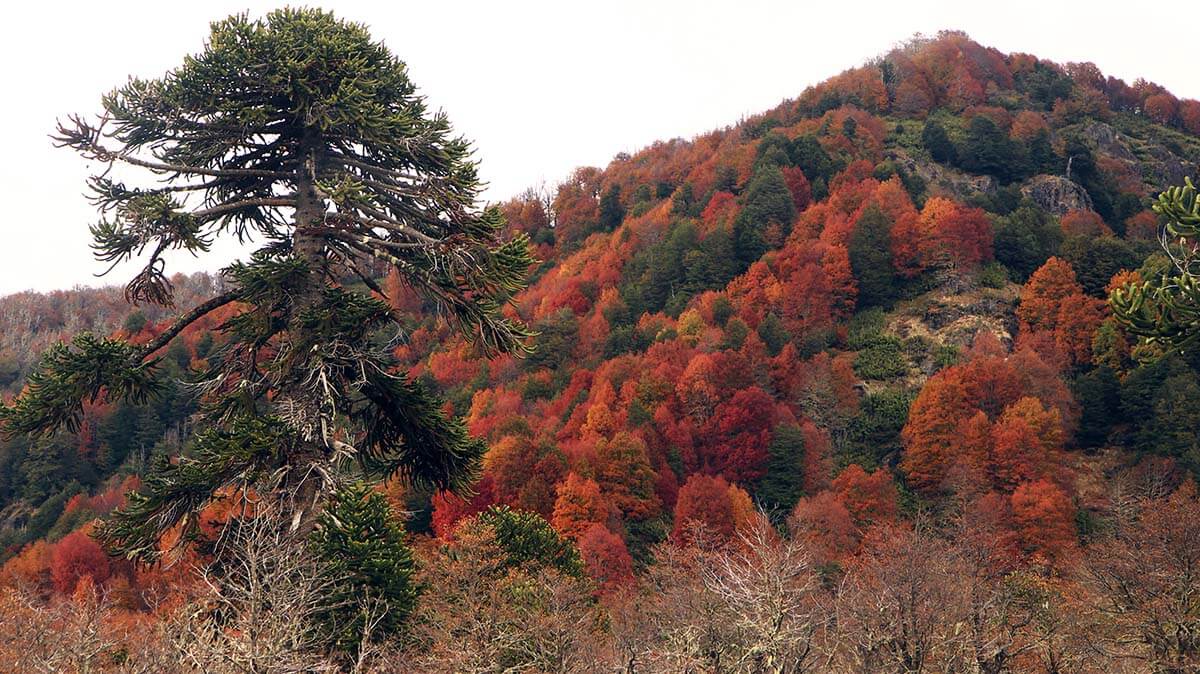 Pehuen or Araucaria (Araucaria araucana) forests are one of the most symbolic and sacred landscapes of Andean southern Chile. Photo: Jesús Sánchez, 2018 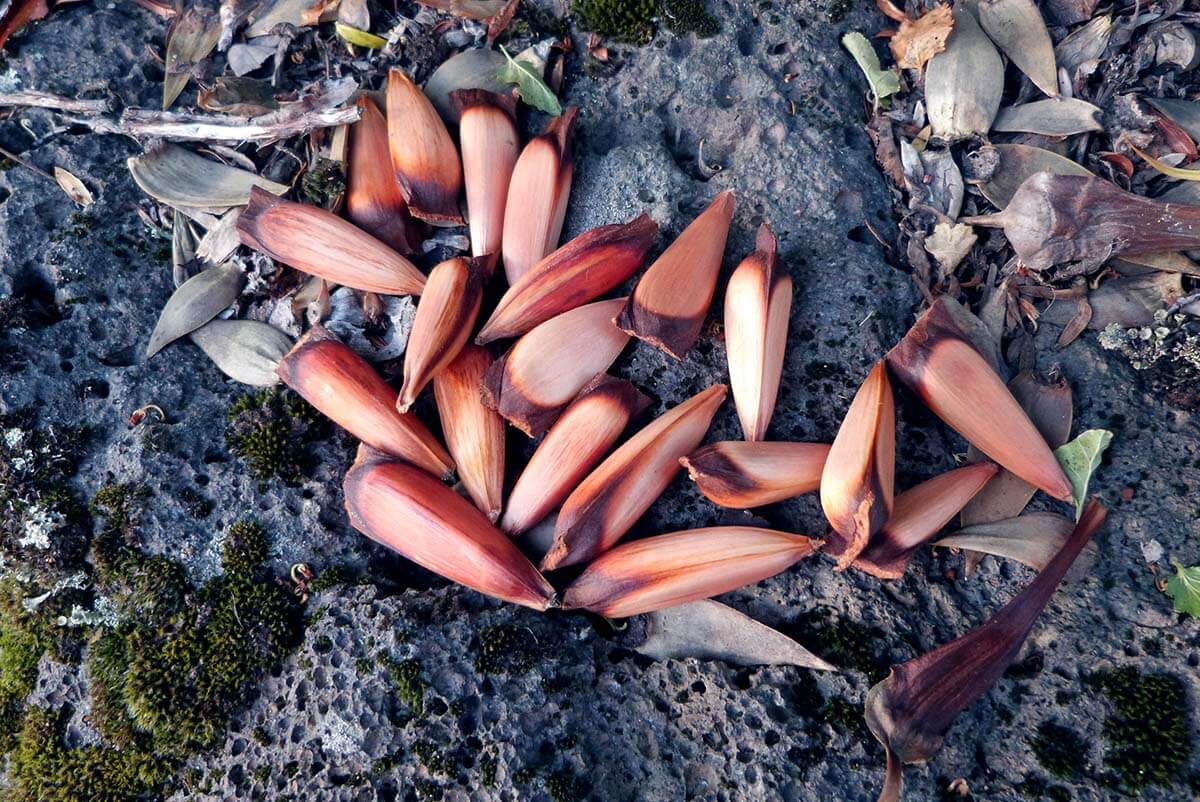 After each summer, delicious seeds called nguilliu fall from this ancient conifer. In times past, these were one of the main staples of the Mapuche people. Photo: Antonia Barreau, 2012 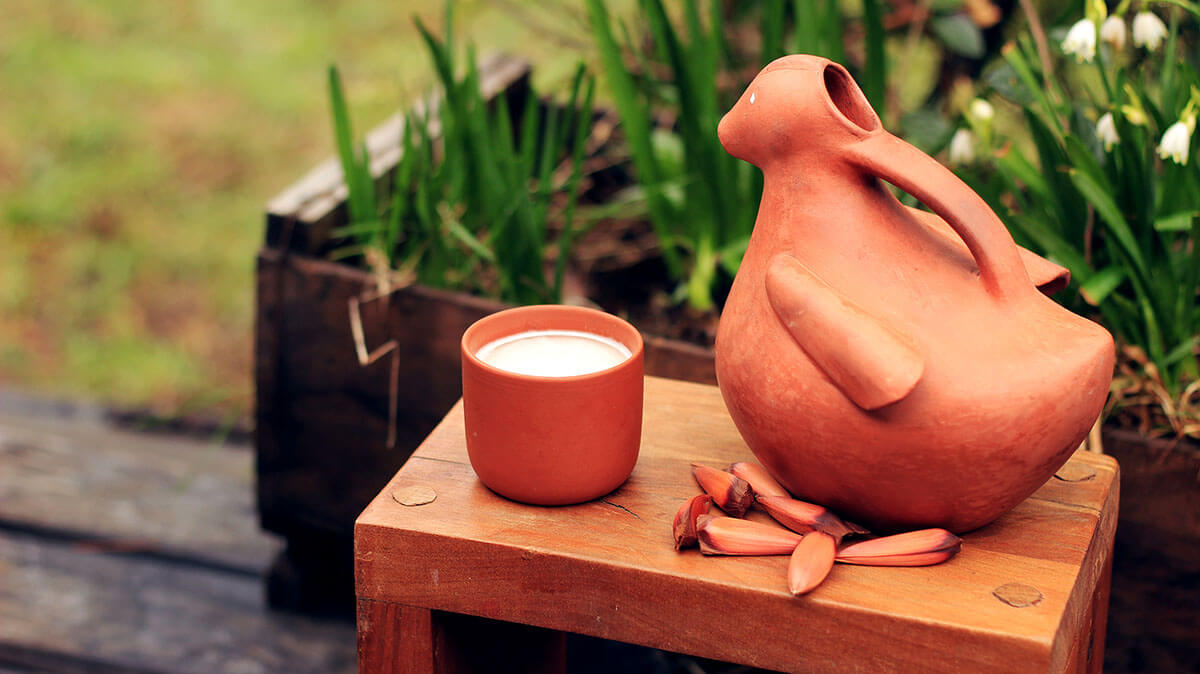 Mudai is a Mapuche traditional drink made out of nguilliu and used in rituals and festivities. Often served in pitchers like this one, it’s a rich drink when fresh, but also enjoyed fermented. Photo: Jesús Sánchez, 2017

In addition, Chilean wild foods have sometimes been stigmatized as the food of the poor or of those still partially outside the market economy. People also find themselves bored with repeating a few timeworn ways of preparing them. The result is a changing landscape of access and use.

Chilean wild foods have sometimes been stigmatized as the food of the poor, but recently perceptions of them have shifted to appreciation of foraged edibles as “gourmet” foods sought after by famous chefs. 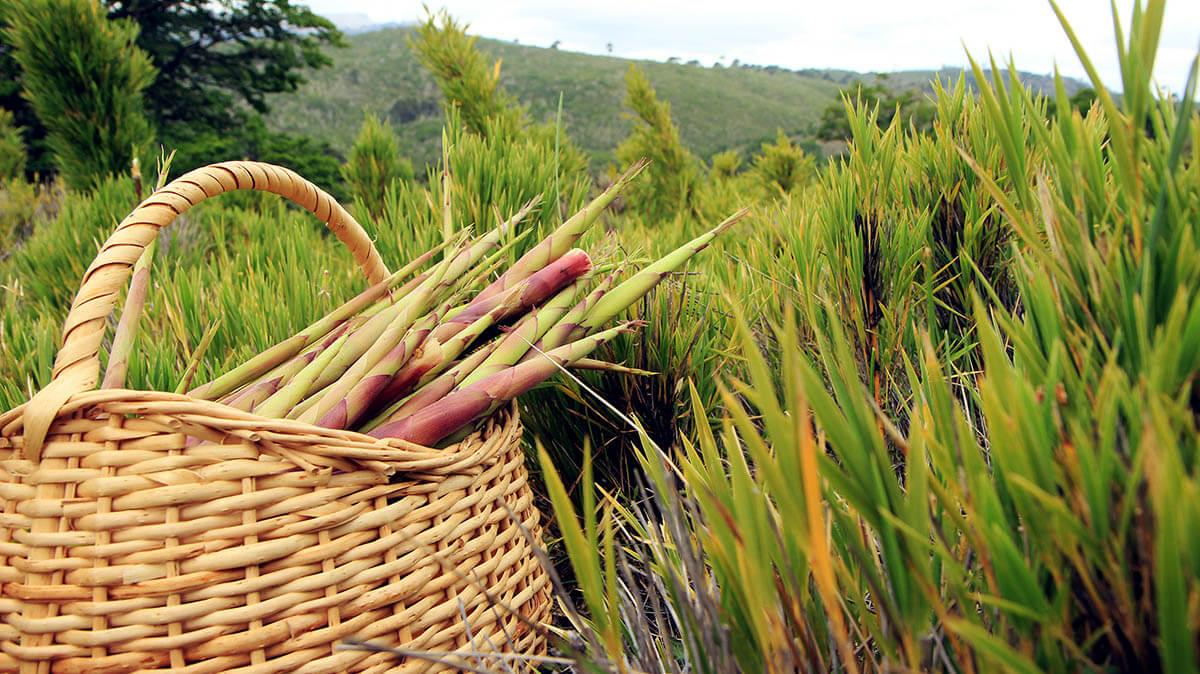 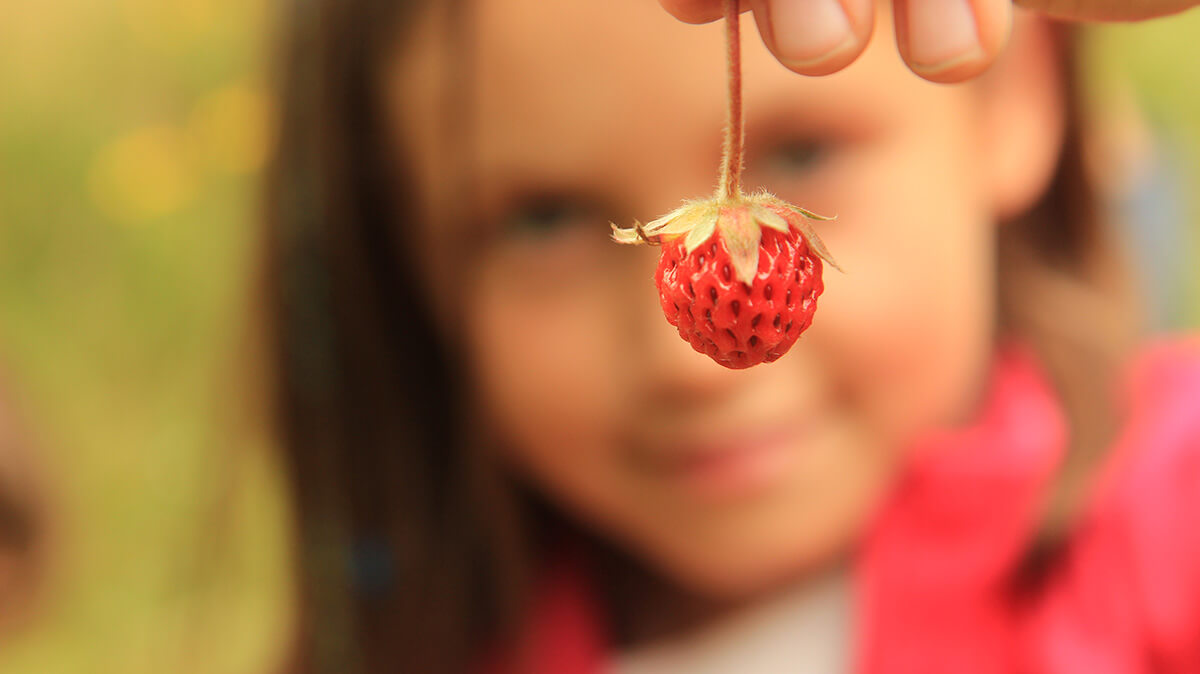 Wild strawberries (Fragaria chiloensis) grow in the mountains during summer. They are tiny but sweet and extremely fragrant. Photo: Jesús Sánchez, 2017

Recently, perceptions of wild foods have shifted from associations with poverty or hunger to appreciation of foraged edibles as “gourmet” foods sought after by famous chefs in Chile’s urban capitals. Therefore, although longtime residents in the Andean Araucanía gather wild edible plants and mushrooms today, they prefer to sell them and buy other foods—many times modern, industrialized ones. The local effect is that wild foods are less frequently consumed where they grow. As is often true in less affluent areas, southern Chile experiences a high incidence of diet-related disease. The nutritional poverty of residents’ diets is worsened when rural gatherers sell wild foods that are high in nutrients to buy rice and noodles. 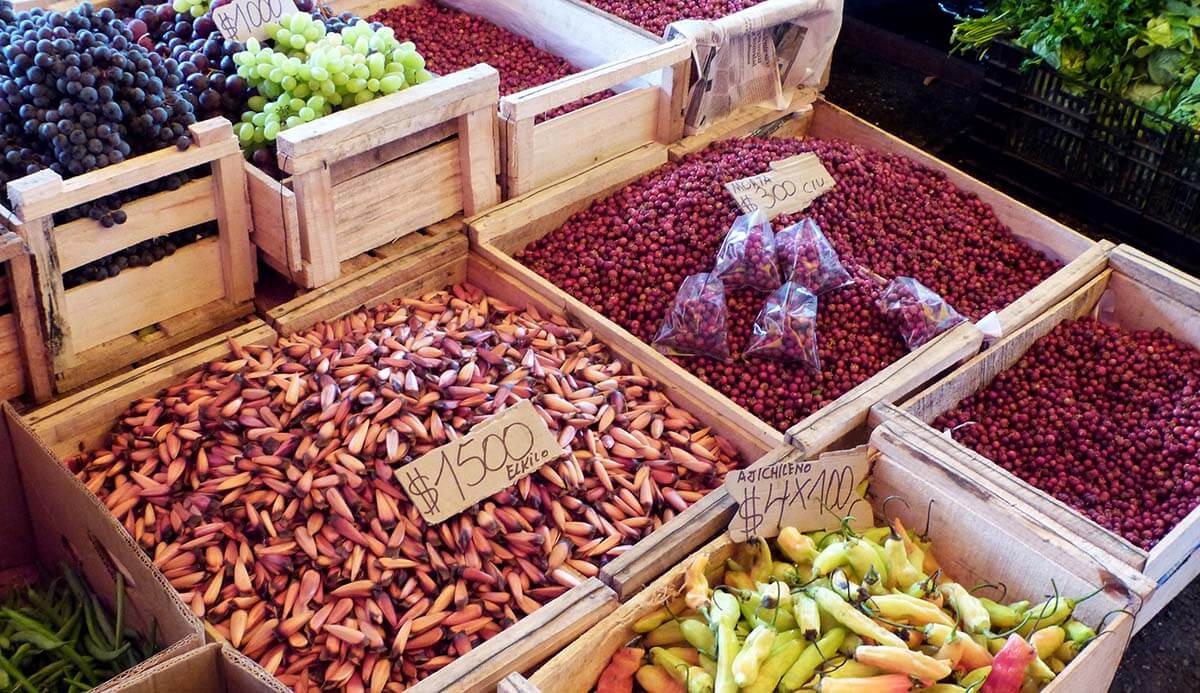 Wild edibles sold at a local market during autumn: nguilliu or piñones on the left and murta berries (Ugni molinae) on the far right. Photo: Antonia Barreau, 2012

Our project, Del Monte a la Cocina (From the Forest to the Kitchen), based in Andean southern Chile, brings together an interdisciplinary group of people interested in revitalizing a cuisine based on not only foraging (‘cocina de origen recolector’) and honoring traditional preparations, but also welcoming creativity and innovation as needed ingredients. Our team—an ethnobotanist, two cooks, and an audiovisual communicator—has been following the rhythm of the foraging calendar of the temperate forests we inhabit while researching, gathering, cooking, and giving ourselves over to the rite of the table. 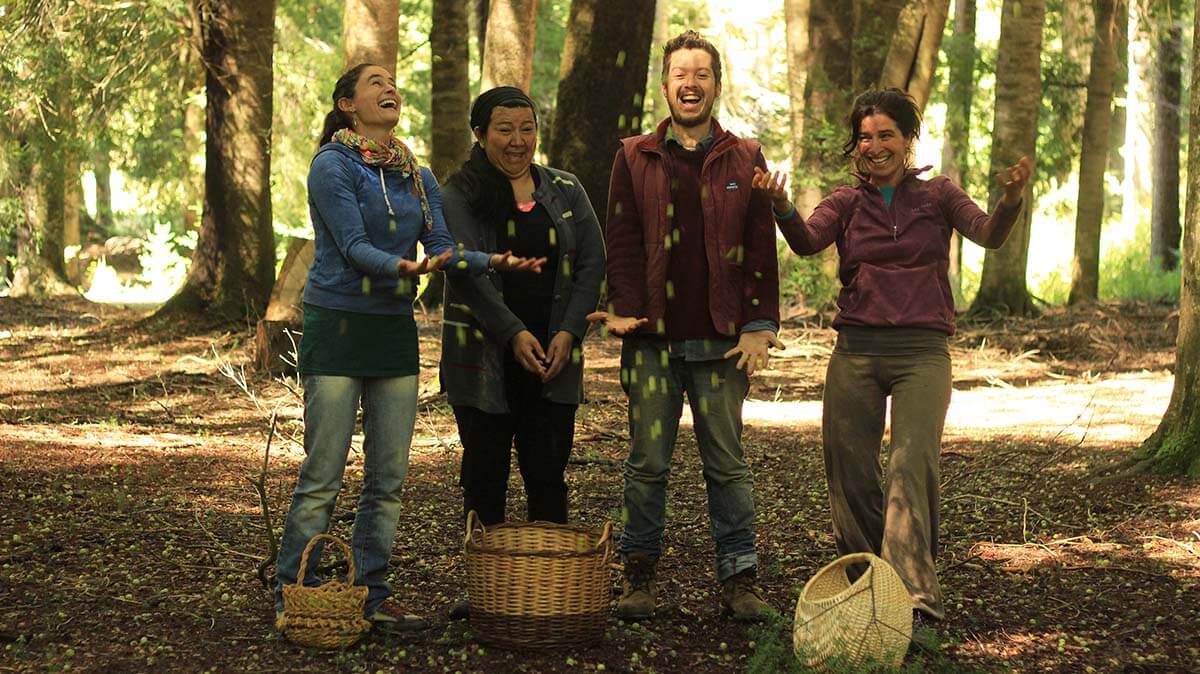 As Sonia Aliante, Mapuche cocinera (chef) of the project, points out, why should the art of food be static? For her, it can still be a Mapuche preparation if you respect the ingredients (seasonal and local) and the ways they interact with the person who prepares them. Foodways are always changing and always have; now, perhaps because of globalization and increased connectivity, these changes are more rapid. Sonia and fellow cocinera Rosario Valdivieso are eager to share both tradition and innovation in the kitchen. 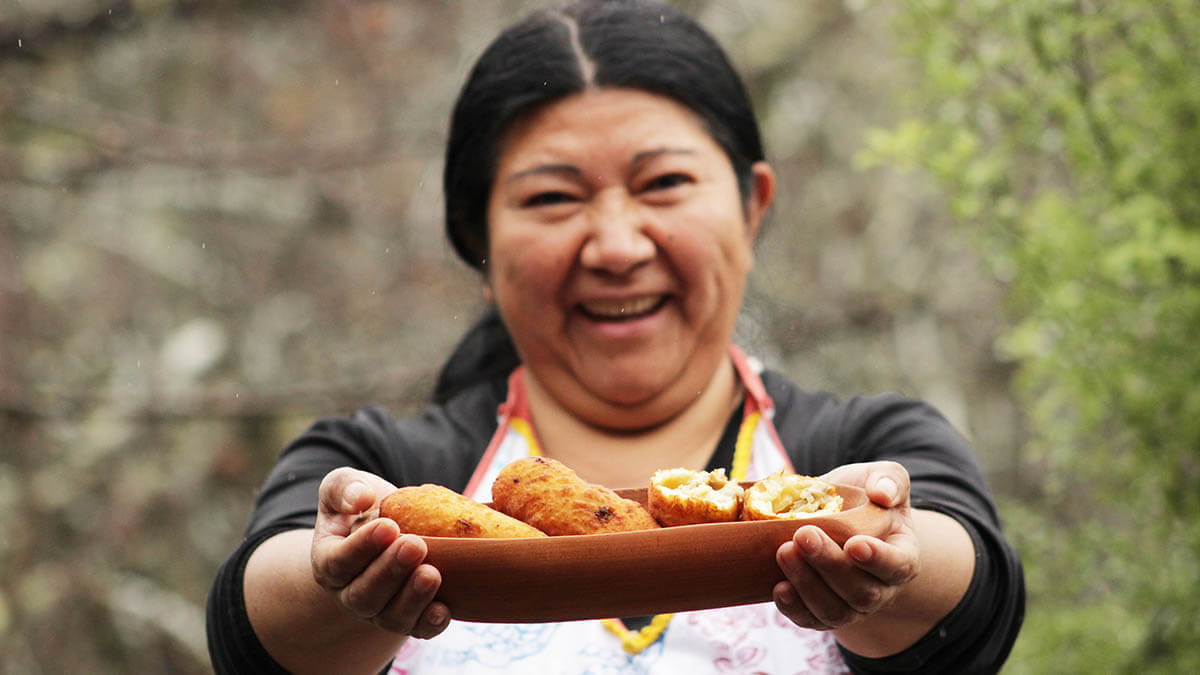 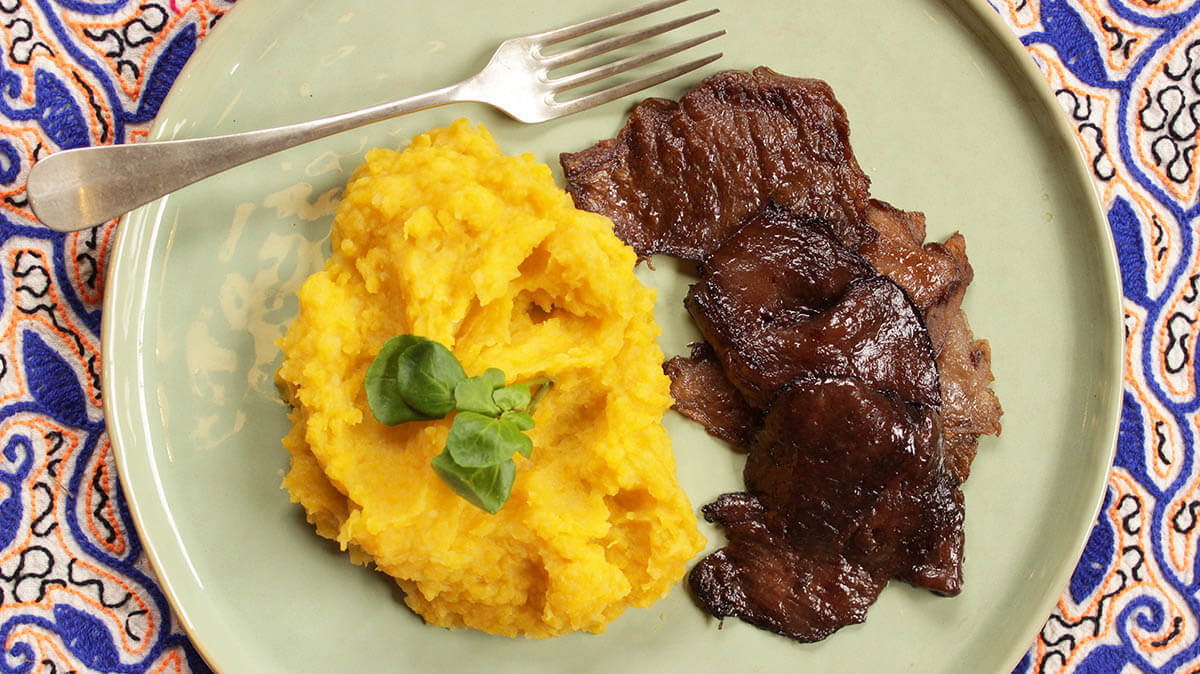 Lengua de vaca Fistulina hepatica with pumpkin puree. The so-called beefsteak mushroom was prized in the fall, when meat was scarce. “It was the beefsteak of the poor,” says Sonia. Photo: Jesús Sánchez, 2017

We don’t consider the gathering of native wild edibles by non-Indigenous users to be a problem. In fact, we believe that foraging for and consuming wild food, locally and regionally, connects us to the land where we live and encourages us to care about it. That is why Del Monte a la Cocina tries to focus locally, to let people know which wild foods are available, how to gather them in a sustainable way, and how to prepare them in delicious and creative ways. After people enjoy particular foods, we believe they will build a genuine relationship with them, human to wild edible, in which these species are valued and conserved.

We believe that foraging for and consuming wild food connects us to the land and encourages us to care about it. 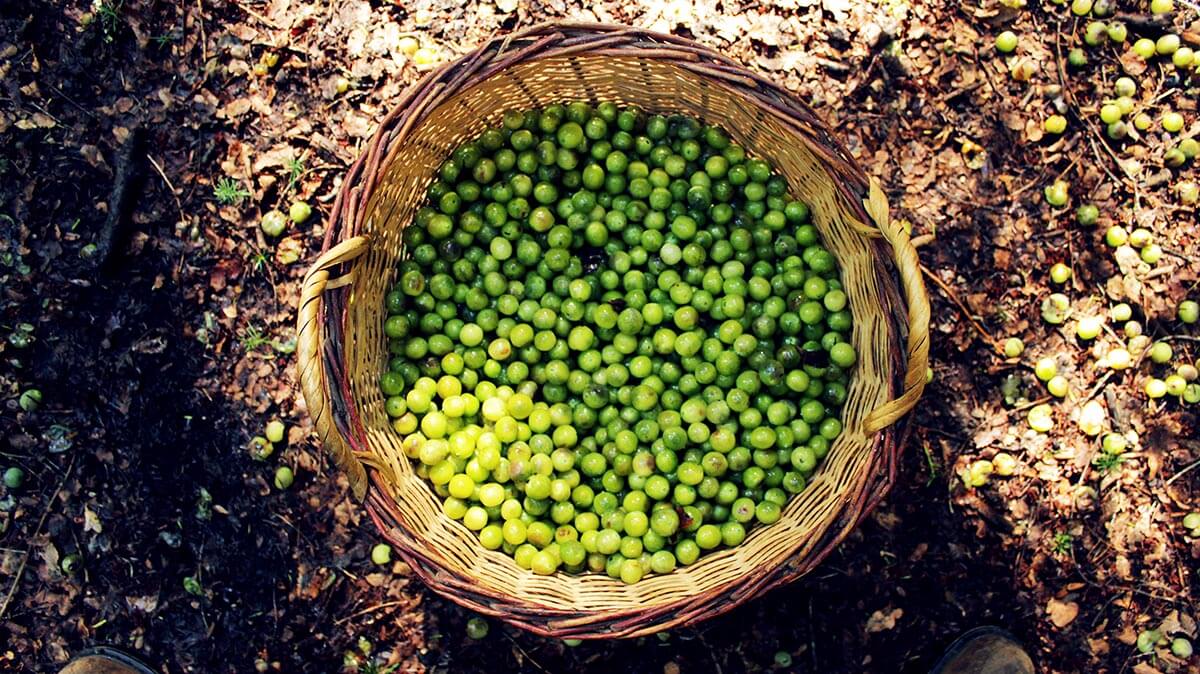 A common question we hear is, why, if we are encouraging people to gather, do we say we promote biocultural conservation? Our answer is that, as people get to know species and landscapes, they come to value them (‘conocer para valorar’). Most of all, we are committed to sharing what we learn in order to inspire. On our website, we share ways to find foods that follow the foraging calendar, to generate connection with and care for wild edibles. We encourage people to get to know particular wild foods, look for them, gather them, cook them, enjoy them, and value them. 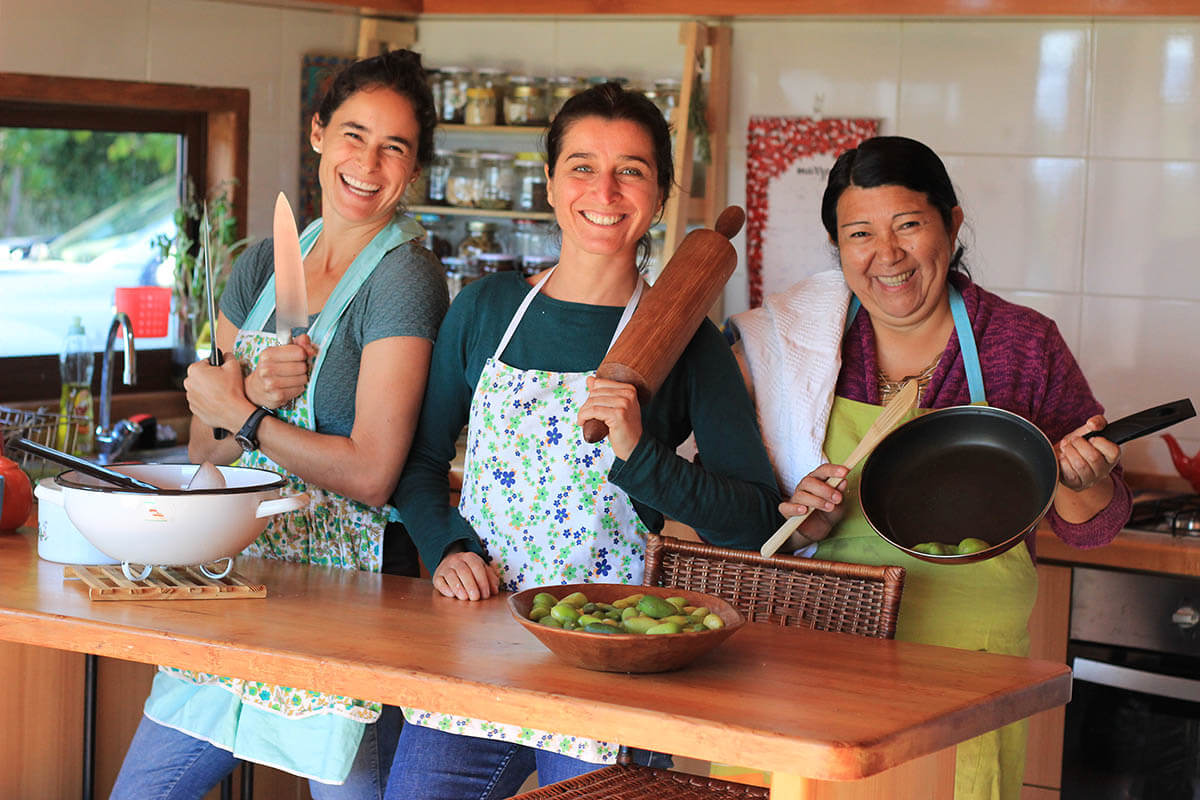 Another frequent question about our project (one we get a lot from fancy restaurants in Santiago, the national capital) is which wild edibles we sell. It is hard for buyers to understand that we sell nothing. Instead, we use food to share the biocultural diversity of our temperate forests. Rather than selling to national markets, our project continues to focus locally, where people and a specific suite of wild edibles live. 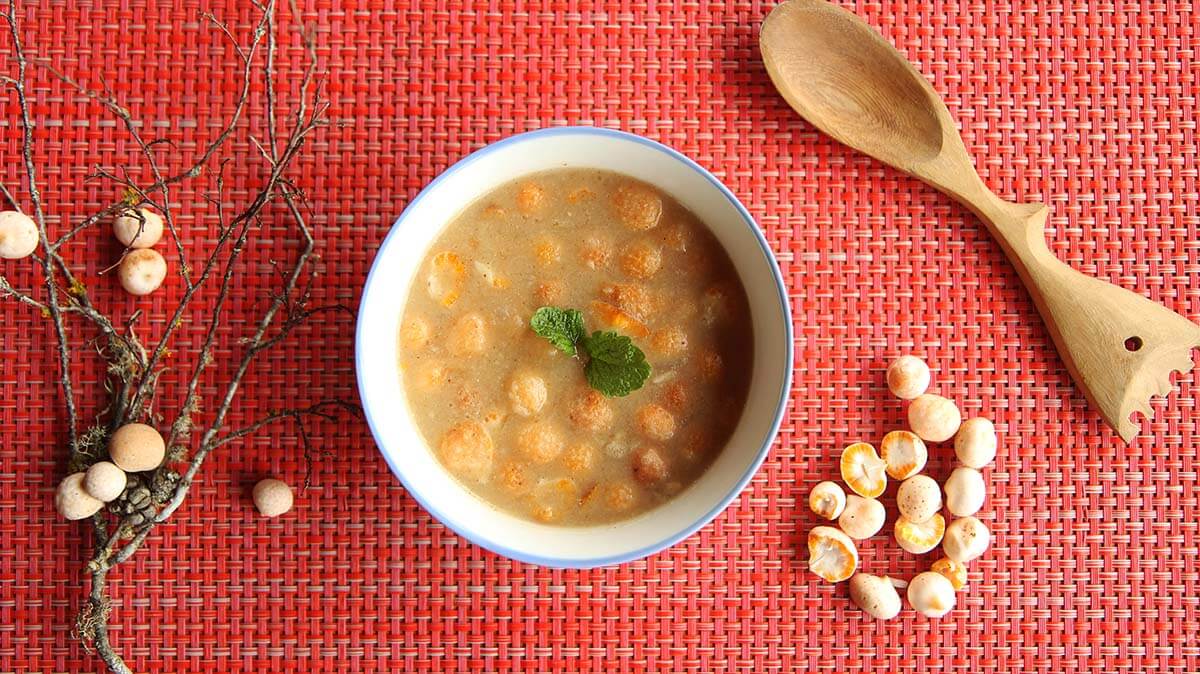 Del Monte a la Cocina offers workshops in rural areas to reconnect longtime residents with wild foods. It has been a great surprise to see how excited local people become when they gather, creatively prepare, and taste these foods. They are transported to the past, via a sort of nostalgia, but also to the future, as they see the potential and value that these free wild foods can provide. We find that what workshop participants truly enjoy most is innovation. They can hardly believe that the tiny round mushrooms digüeñes (Cyttaria espinosae) need not always be eaten raw and with scrambled eggs, but can be dried, turned into conserves, and even made into a sweet wine-based tart! 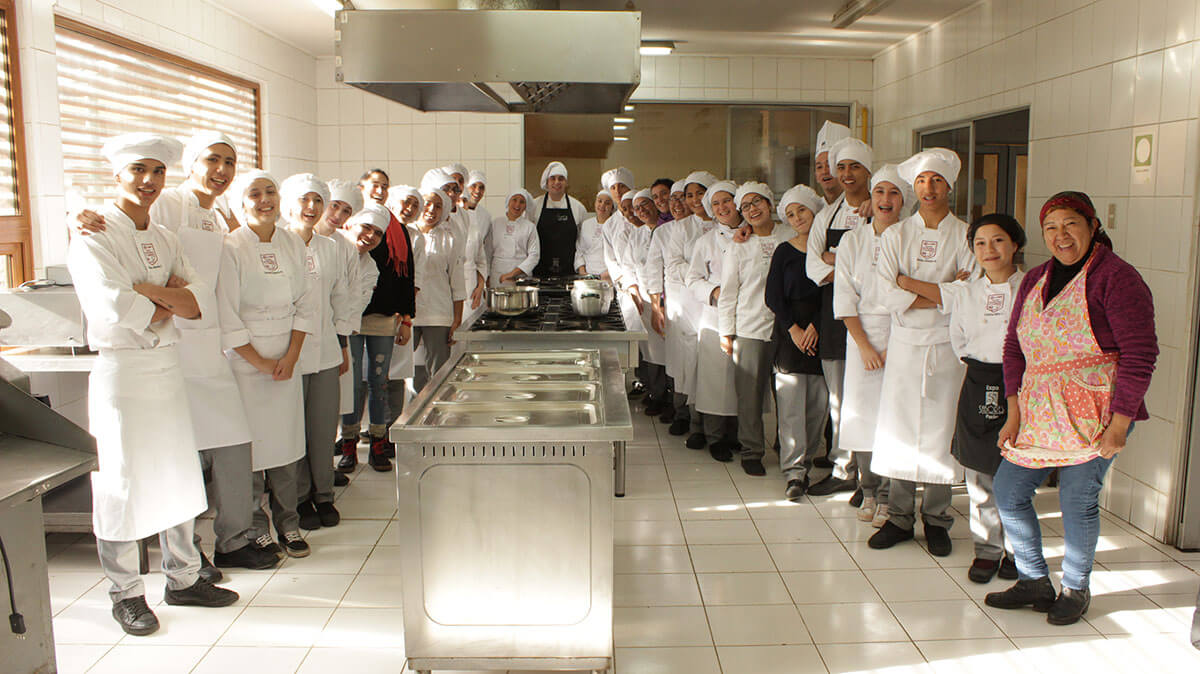 Where future chefs and cocineras meet: Sonia and Rosario lead a workshop at the Gastronomic Technical School of Pucón. Photo: Jesús Sánchez, 2017

Gathering and preparing wild edibles nourishes people physically, through consuming nutritious food and by the physical exercise of gathering. It sustains us culturally, in both honoring traditional cuisine and giving value to innovation. Spiritually, it connects us with loved ones and the foodscapes that nurture us. 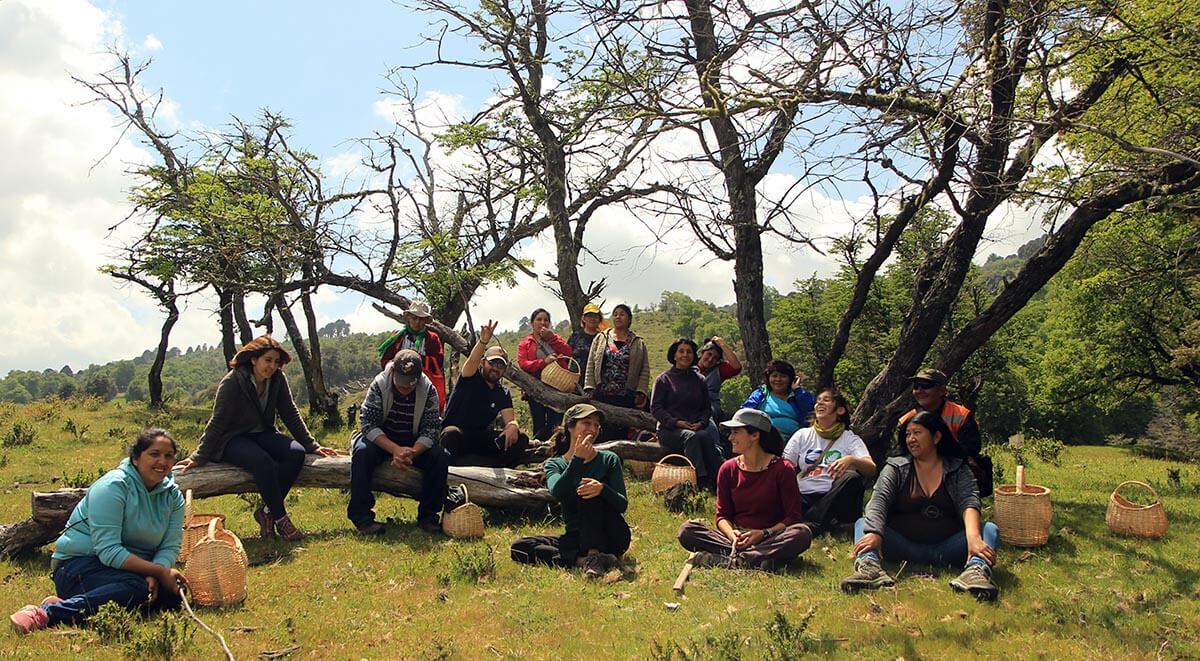 Antonia Barreau, a Chilean ethnobotanist and wild food gatherer, is fascinated by the relationships between plants and people living in forest ecosystems. She investigates and documents traditional knowledge of local flora and fungi and works on projects associated with family gardens and gathering, with food sovereignty as a core concept.

Sonia Aliante Raiguanque, a Mapuche woman born in Kurarewe, Chile, has promoted traditional foods for sixteen years and loves sharing her culture through food. In her kitchen, she tries to bring back and innovate on “that old style of cooking that our ñuke (mothers) and kushe papai (grandmothers) taught us.”

Jesús Sánchez trained as an audiovisual communicator and musician and creates audiovisual productions whereby the relationship between nature and humans is a basic element of storytelling. In 2015, he recorded an animated short, “Nahuel, a Mapuche Legend.” Work in Arucanía forests and gardens has made him revalue food.

Rosario Valdivieso, a mother of two, is passionate about transforming and sharing food via the rite of the table. This project let her engage with the forest, connect with the food tradition of the place she lives, and take up the challenge to try new preparations with gathered species.

Susannah R. McCandless is a political ecologist based in Vermont, USA, and a director of the Global Diversity Foundation. She works with immigrant, Indigenous, and local communities and professionals engaged in sustaining ecologies of home, advancing sovereignty, and co-creating knowledge.