Dreaming of a Beautiful World Where I Could Live One Day 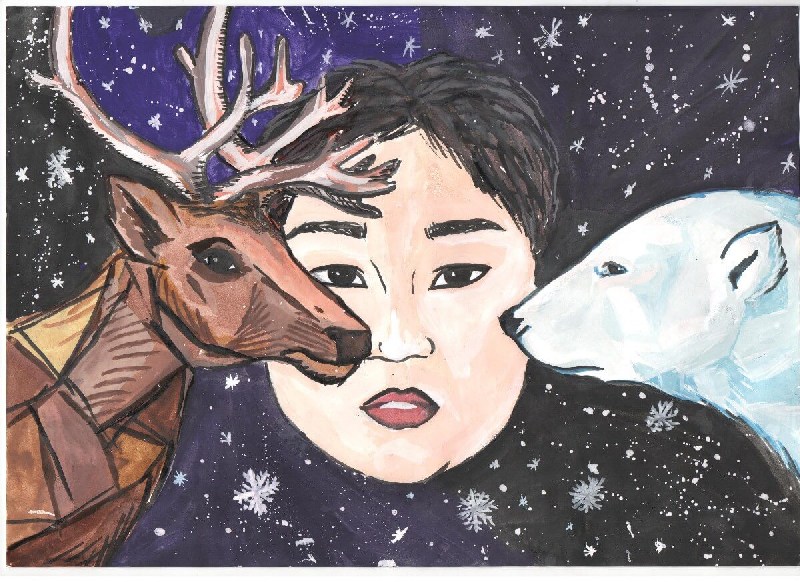 For me, art is a mere instrument of survival. I was born in an Arctic village, where fathers and brothers were vanishing faster than ice. I was running away from violence, hiding in nature, and dreaming of a beautiful world where I could live one day.

I was running away from violence, hiding in nature, and dreaming of a beautiful world where I could live one day.

On the left side of the Indigirka River, just below its confluence with the Allaikha, lies Chokurdakh, a little place, famous for the remains of prehistoric mammoths found in the area. Here, 18 years ago, Katrina was born.

There is no year-round road in and out of Chokurdakh. It’s only in the winter, when temperatures plummet to –50 ˚C, that the Indigirka River becomes a frozen highway. 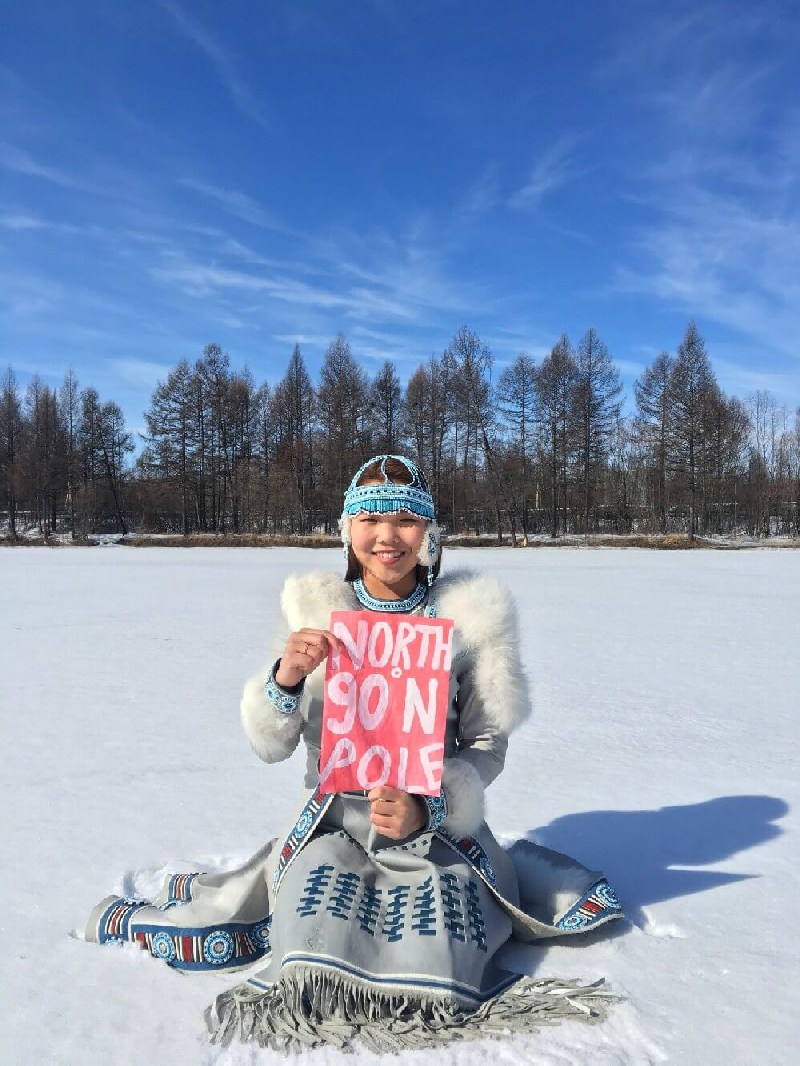 Katrina Trofimova’s artwork traveled with the Arctic Without Borders exhibition on the drifting ice of the North Pole in 2018. Photo: Galya Morrell, 2018

Katrina was born in Chokurdakh but didn’t grow up there. Her family lived in an even more remote and less accessible place: Olenegorsk village, whose name literally means “a reindeer place.” There was no running water there, or indoor toilet, not much to be found in the store and, again, no real road. Yet, Katrina says over and over again that this was the best place to grow up as a child and become an artist. 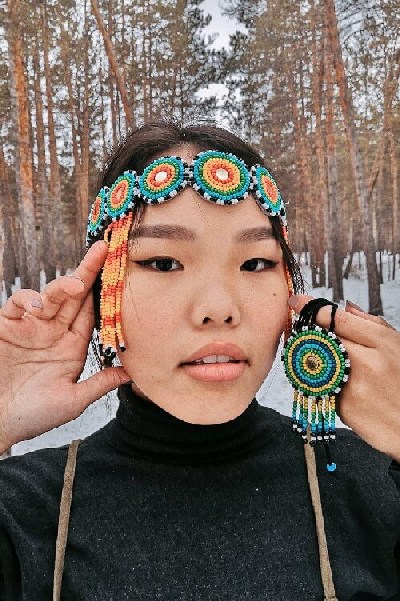 A graduate of the Arctica boarding school for Indigenous children of Siberia, Katrina is dreaming of a career as an ethno-designer. Photo: Galya Morrell, 2018

We spent days outside, in nature. Dressed in reindeer furs from head to toe, like little penguins, we were invulnerable to the frost. When we got hungry, we simply fished and fried the catch on the snowy shore. Nature was my home.

My father, like everyone else in the village, was drinking, and when he got drunk he would get violent and we had to flee. Was I scared? Not really. We saw it as a hide-and-seek game, rather than “abuse.” It was normal. Everyone lived just like that.

I loved my father and he loved me.

My father died from alcohol when I was 11. He left my mother with four children, and our life changed forever after his departure. Was I angry at him? No, I wasn’t. Unlike city kids, we knew that life can be unfair and all you need to do is to stay human regardless of your surroundings.

And then my brother committed suicide. He was just 18. It was horrible, but again, it was normal. Boys often take their lives on the edge of the planet, all around the Arctic.

Some may say that my childhood was tragic, but as an artist and a human being, I see it as the best place, somewhere I would want to return to and live in again. I had love.

Since I was born in August, my mother gave me two names: Augustina-Katrina. She had read in the newspaper that it was getting trendy. Yet, in my village, I was the only one with two names.

I was born under the sign of the Lion, and I feel that Lion is my protector and guardian, both in life and in art. One thing I am learning from Lion is wisdom.

Some may say that my childhood was tragic, but as an artist and a human being, I see it as the best place, somewhere I would want to return to and live it again. I had love.

There are no lions in the Arctic, except for the one that lives in Katrina’s heart. There are polar bears, Arctic wolves, and reindeer. Katrina talks to them and they talk back to her.

The Arctic world, and the world in general, is in equilibrium. It was conceived as such, and when humans try to alter it for greed or angst or jealousy, things get broken.

Our world is a boat that is sinking. As an artist, I see it as my mission to reveal some earthly things that are mostly unseen and look at them from the perspective of the Cosmos. 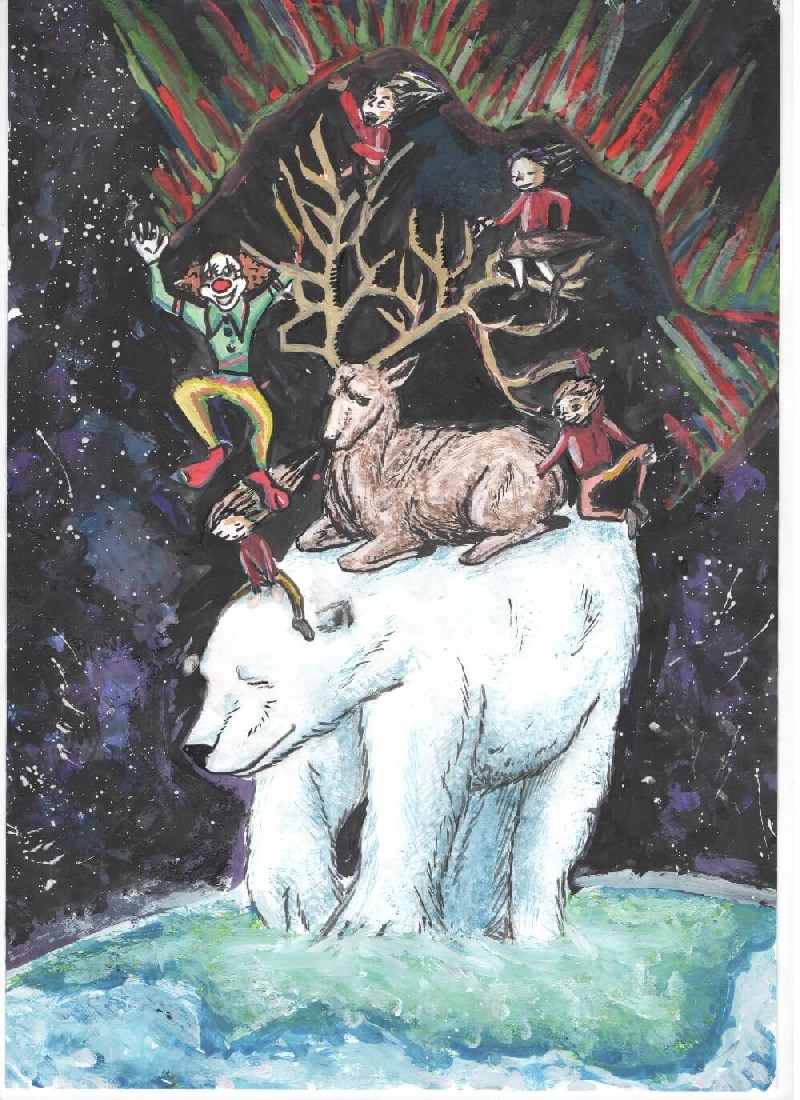 A polar bear is carrying the universe on his back, along with a reindeer and little Arctic Clowns — the humans who learned to live in unison with nature. Artwork: Katrina Trofimova. Photo: 2018 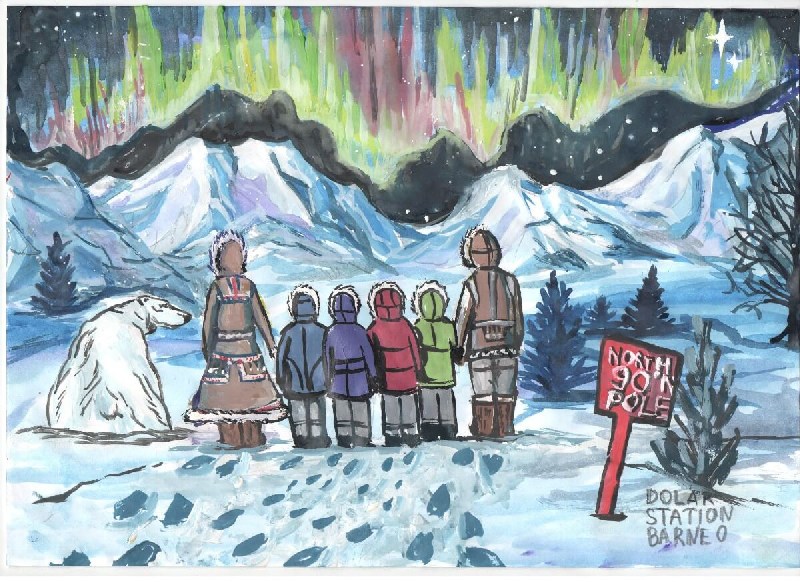 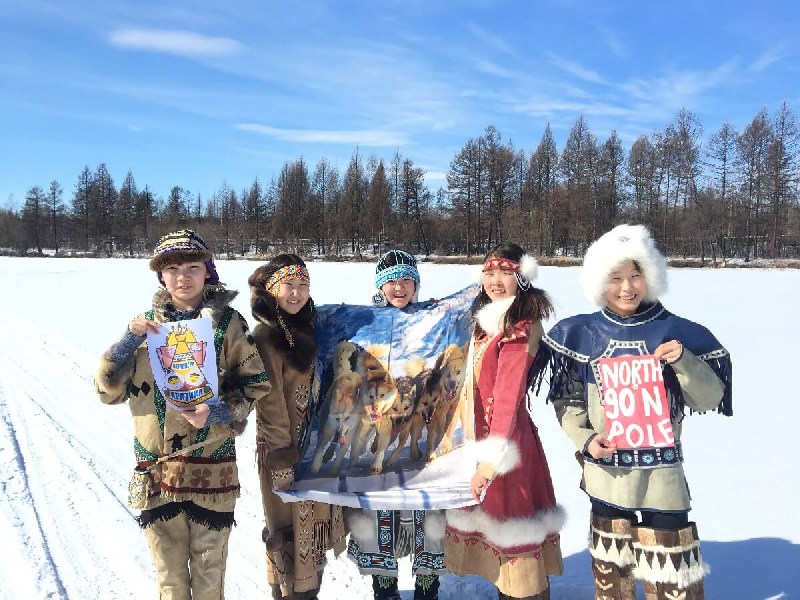 “Let’s meet on the North Pole and become one family!” — the Arctica boarding school Indigenous students sing and dance on the snow near their school. Photo: Galya Morrell, 2018

As an artist, I see it as my mission to reveal some earthly things, that are mostly unseen, and look at them from the perspective of the Cosmos.

At the age of 14, Katrina entered the Arctica School, a boarding school for gifted Indigenous children in Neryungri, Yakutia, located in the very heart of Siberia. Arctica has been a partner of two of the expeditions of Avannaa, Arctic Without Borders, and Arctic Arts, and through this partnership Katrina’s paintings ended up being showcased at the mobile exhibition of Indigenous artists at the North Pole in 2018. Finally, her bear was really standing on top of the planet with the reindeer on its head, carrying the little Arctic clowns high in the sky. On a drifting floe of ice, Katrina’s works became stage decorations for the first children’s play devoted to climate change and ocean pollution at the North Pole.

For more, see the website of Galya Morrell, Adventure Artist

Katrina Trofimova is an 18-year-old Even artist from Yakutia, Siberia. At the age of 14, she entered a boarding school for gifted Indigenous children in Neryungri, Yakutia. In 2018, her paintings were showcased at a mobile exhibition of Indigenous artists on the North Pole..