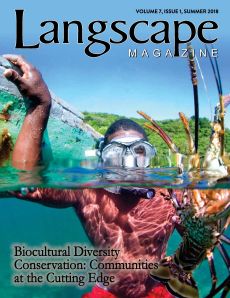 What does it mean for a community to “conserve” biocultural diversity? Our theme, “Biocultural Diversity Conservation: Communities at the Cutting Edge,” has that idea at its core, and I think it’s worth taking a moment to delve into what this really means before inviting you to read on for a summary of the good contributions — articles, photo essays, and a poem — that make up this issue of Langscape Magazine.

As someone who has spent most of his paid career reflecting on the creation and management of protected areas, I am perhaps more aware than most of the unexamined foundations of what it means to “do conservation.”

People don’t conserve places, nor do they conserve particular cultural practices — they conserve values that they associate with places and practices. I believe the key to understanding conservation’s meaning is to think of it as a cultural technique that people use to ensure the continuity of values that are important to them. It’s not the only way of doing this: perpetuating a religious or spiritual observance, maintaining one’s family traditions, teaching a young child to speak her grandmother’s native language, or learning and carrying on a traditional craft are other examples, and there are many more.

The technique of conservation involves, first, identifying values in nature or culture (or, as readers of Langscape Magazine are particularly concerned with, the fusing of both into a single biocultural complex); second, persuading other people to recognize them; and third, convincing people to make very specific restrictions in their behavior so as to perpetuate them.

Aside from working on protected areas, I have also spent more than twenty years thinking and writing about biocultural diversity. One thing that has become apparent to me over this time is that communities are the “unit of selection” (to borrow an evolutionary term) when it comes to biocultural diversity conservation. Yes, individual champions are important, tremendously so, and the support of national and international organizations is unquestionably helpful. But the community level is where the perfect marriage of personal commitment and collective action is found, for it is communities that are the front-line stewards and protectors of special places and revered traditions. They too are the engines for innovative thinking and action that refresh the meanings — the values — of the biocultural presence that, ultimately, animate all of life on Earth.

The contributions to this issue of Langscape Magazine offer many angles on community-led biocultural diversity conservation. Here is a quick tour.

The “Ideas” section of this issue opens with a challenge from Ilarion (Larry) Merculieff and Libby Roderick to non-Indigenous people to rethink, from the ground up, how language works in the world. Drawing on the linguistic understandings and practices of the Unangan (Aleuts) communities of Alaska’s Pribilof Islands, as well as those of other Indigenous peoples, the authors argue in a direct and powerful way that words are not just abstractions but entities with intrinsic power that “must be chosen and used with utmost care.”

Cultivating and securing a sense of belonging is probably one of the most important motivators for biocultural stewards. As Duncan Haynes, Michelle Cocks, and Charlie Shackleton relate, amaXhosa urban residents in South Africa’s townships often infuse the spaces in and around their dwellings with rituals, plantings, and agricultural practices that replicate traditions from ancestral rural areas. These biocultural gestures serve to make their new house a “spiritual home” that is shared with ancestors.

The next three articles highlight inventive approaches that communities and their collaborators are developing to safeguard biocultural diversity. One of the great strengths of a community biocultural perspective is that it drills down into rich stores of local facts that contradict stereotypes. Pernilla Malmer and Prasert Trakansuphakon’s explication of the sustainable agricultural methods of a northern Thailand community is a textbook case. Rotational farming (often denigrated as “slash and burn”) tends to be condemned by Western conservationists as an environmental disaster, but the people of Hin Lad Nai have systematically pioneered rotational techniques centered on a versatile local tree species that belie such conventional wisdom. In a different kind of innovation, Gabriel Nemogá, Justico Domicó, and Alejandro Molina helped the Embera people of Colombia create their own biocultural protocols, “sets of rules and responsibilities that communities design to preserve their worldviews, values, knowledge, and spiritual relations with nature.” Through a community-driven process, these guidelines promise to help the Embera maintain their identity in the teeth of outside homogenizing forces. Echoing some of the issues raised by Merculieff and Roderick, Thomas Dean King closes with a discussion about the work that the nongovernmental organization Marine Conservation without Borders is doing in conjunction with a variety of Caribbean communities to translate marine science concepts and conservation principles into local languages — thereby vastly increasing their relevance to local people.

The three contributions to the “Reflections” section call to us from the inner experiences of the respective authors. By immersing himself “in an integration of ancient Hawaiian ahupua’a resource wisdom and our modern ecological management,” Harvy King makes a personal endorsement of the responsibility “to live up to and maintain your values — to hold on to your ancestral line.” In a powerfully incised — and incisive — verse titled “Into This Processed Woven Land,” the poet Momoe Malietoa von Reiche asks us to mourn “a fractured landscape/Nervous leftovers of/Cultural powerlines” whose harmony, if it once existed at all, is now lost through human neglect. This section concludes with a thoughtful essay by Jessica Brown who deftly combines an account of her personal journey toward a biocultural perspective with similar recent developments on one of conservation’s biggest stages: the World Heritage Convention.

Turning to “Dispatches” from communities around the world, Yolanda López-Maldonado shares her perspective as a Maya woman on the continuing importance of cenotes — sinkholes that provide not only life-sustaining water to rural communities in Mexico’s Yucatán peninsula, but also vital spiritual connections to the landscape. Fish, and the entire cultural panoply that surrounds the enterprise of fishing, is the ancestral connection described in the article by Joakim Boström, Anna-Märta Henriksson, and Marie Kvarnström. A community-based organization called Kustringen, representing fishing villages in an archipelago in the far north of Sweden, is advocating for local environmental knowledge to be considered alongside Western scientific judgments in environmental policy-making by the national government.

In a photo essay, Laurent Jean Pierre introduces us to the Sweeping Dance of the Caribbean nation of St. Lucia, which depends equally on the conservation of an endangered species of palm and on the continuance of broom-making as an artisanal craft and industry. A different kind of creativity is related by Marina Aman Sham in her account of the Dusun of Ulu Papar, Malaysia, who are recording in written form several oral histories and tales of strength, conflict, and peacemaking on their territory as told by community elders.

Fassil Gebeyehu Yelemtu takes us on a personal journey of remembrance through his boyhood spent in various communities in Ethiopia. In each one, he found himself lifted up when peers shared their own experiences growing up in rural areas — foodways, farming wisdom, plant knowledge, and so on — which imparted a feeling of solidarity in what might otherwise have been an isolating time. The next “Dispatch” is from Italy, where the ancient handball game palla a 21 has served to galvanize an entire rural valley to embrace traditions in danger of being lost. The upshot, as Andrea Giacomelli explains, is that valued and venerable cultural practices are being used as a springboard to new means of prosperity. This section ends with an account by Emmeline Topp of the battle to save the biocultural fabric of a globally rare landscape element, the renosterveld of South Africa’s Western Cape region. Maintaining this “living connection to the local ecosystem” requires both the protection of the “renosterveld biodiversity itself and its potential value for people.”

Two “web extras” — digital-only articles that are available exclusively online — round out this issue. Michaela Jeannaisse Carter tells of her efforts to assist the peoples of the Bama First Nations living in what is now called Queensland to re-embed their place names on the maps of (and in the consciousness of) non-Indigenous Australians. Finally, Soner Oruç and Ceren Kazancı offer a joyful, enthusiastic account of their quest to document and honor the traditional knowledge associated with the highlands of the Western Lesser Caucasus mountains along the Georgia–Turkey border.

At the beginning of this editorial, I referred to conservation as a “cultural technique” to call out the fact that it is a tool that does indeed vary across cultures, even though as a kind of conceptual shorthand, it is often presented as something good and desirable that floats free, untethered to local situations. I hope that the images, narratives, and poetry gathered in this edition of Langscape Magazine will inspire you to think about the conservation of biocultural diversity in new ways and to support the efforts communities are making all over the world to ensure that the values at stake never disappear.

For retrospective overviews on the development and application of the concept of biocultural diversity, you may wish to take a look at two past Langscape Magazine articles: David Harmon’s “Biocultural Diversity: Reason, Ethics, and Emotion” and Ken Wilson’s “Flourishing at Twenty: On Context and Foundations in the Rise of the Concept of Biocultural Diversity.”