Nourishing Body and Soul:
The Biocultural Diversity of Food 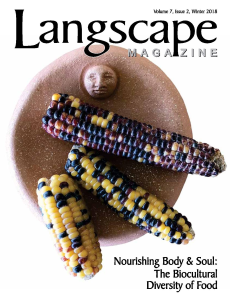 Being together, sharing food. More than any other, this needful act sets the rhythm of human life. For those of us fortunate enough to live that life free of hunger, of the all-darkening worry about where our next nourishment will come from, the repetitiveness of preparing and eating meals can all too easily obscure their deep significance. So too does the propensity, in modern life, of downing food and drink while on the run. Not just literally, but metaphorically: Can there be a sadder image than that of a family sitting around a table, each person eating distractedly while staring at a smartphone? Alone together, consuming calories.

The not-so-secret ingredients in the recipe for actually sharing a meal rather than just ingesting it are mindfulness and caring, traits that run through all the stories in this issue of Langscape Magazine, titled “Nourishing Body and Soul: The Biocultural Diversity of Food.” The contributors are mindful that the casado or frittula or Haku Chhoyal or botvinia — set on plates, wrapped in leaves, poured into bowls ready for human hands — are each the tasty culmination of a process that began months before with the careful raising (or hunting, or gathering) and preparing of the ingredients.

That’s why I’ve chosen the English word “repast” for the title of this editorial. It connotes something more than just a meal, I think. No matter whether we are sitting down to a “light repast” or a “sumptuous” one, the overtone is that here is something created with considerable forethought and care, not pulled ready-made from a freezer or grabbed from a drive-thru (McDonald’s sells “Happy Meals,” not joyous repasts). As you’ll see, our authors are thoughtful about every aspect of the process, and I like to think of the stories they tell as a biocultural smorgasbord, a sampler of the world’s repasts.

Over thousands of years different cultures have painstakingly fine-tuned their production of food and drink to optimize locally available gifts of the field, forest, and sea. So closely is this production tied to highly variable local environments that one of our stories rightly refers to it as “the soul of biocultural heritage.” A major theme in this issue is the challenge that traditional (especially Indigenous) foodways face from international agribusiness and its promotion of mass-produced, highly processed, seductively convenient products. Helping local and Indigenous communities maintain or regain their food traditions has implications for community health, stable land tenure, and cultural vitality, all of which are explored here.

In the “Ideas” section of this issue, we highlight Melissa K. Nelson’s story of the Native Seed Pod, a new podcast from The Cultural Conservancy that truly lives up to its name. The podcast delivers insights, advice, and wisdom from Native seed keepers who emphasize the role of plants as teachers. Not the least of their lessons is the need to embrace an “abundance consciousness” that encourages us to be more grateful and compassionate.

Turning to “Reflections,” Felipe Montoya-Greenheck considers threats to the food traditions of Puriscal, a rural canton in Costa Rica long considered the granary that helped feed the capital, San José. Puriscal’s stable and productive agrarian landscape was undermined by the country’s push toward “modernization,” relegating subsistence farming, along with a host of Indigenous foods, to the margins. Today, there are organized efforts to rescue forgotten food uses of plants as part of a broader restoration of Puriscal’s local knowledge systems. Similarly, in the San Francisco Bay Area of California (USA), a robust traditional Indigenous economy was almost decimated in the wake of Spanish conquest. But, as Sara Moncado and Maya Harjo tell us, California Natives persevered and never forgot the acorn teachings of the oak woodlands (symbolized by the Grandmother Oak) upon which the ancestors depended.

On the other side of the world from California, another resilient Indigenous group, the Newar of Nepal’s Kathmandu Valley, carry on with one of their most cherished traditions: the preparation of a special salad featuring roasted buffalo meat that is served on festive occasions. A photo essay by Sheetal Vaidya, Manju Maharjan, and Prakash Khadgi steps us through the preparation, explains the sociocultural context of the dish, and, in an interesting twist — one we will see again — relates how the salad has now found its way onto the menus of popular restaurants in nearby cities. Next we pause for an interlude: a short poem by Carrie Ann Barton that connects the mouth-watering aromas of good food with a sense of togetherness and belonging.

Returning to contemporary challenges to food traditions, Felix Kwabena Donkor and Kevin Mearns make incisive connections between global food-related issues with on-the-ground realities in Mpakeni, a South African village. There, young people are loath to master the knowledge needed to farm and cook the area’s traditional foods. That is dismaying to elderly community members, casting doubt in their minds on the future of the community, and the authors call for an all-out effort to encourage the appreciation of biocultural food heritage among all ages. Back in North America, one response to the perennial challenge of sustaining food traditions across generations is the emergence of organized seed stewardship networks. In a photo essay, Mateo Hinojosa spotlights some of the tribal people leading the movement, many of whom campaign for “rematriating” seeds: ensuring that Indigenous varieties held by private collectors and in academic institutions are brought back to their communities of origin so they can once again flourish “at home.”

This issue’s “Dispatches” come to us from Latin America, Southeast Asia, India, and Mediterranean Europe. Antonia Barreau, Sonia Aliante, Jesús Sánchez, Rosario Valdivieso, and Susannah McCandless examine the push-and-pull of traditional Mapuche cuisine within today’s Chilean foodscape. On the one hand, longtime residents still gather wild edibles in abundance, but they prefer to sell them at market, where they are now trendy gourmet fare for both lifestyle migrants to the countryside and famous chefs in Chile’s cities. The authors share details of their multidisciplinary, not-for-profit research and action project that places wild foods at the center of biocultural conservation.

A poignant reminder of what’s at stake is offered by Lina A. Karolin, a young Indigenous person from the Ot Danum community of Indonesia. She relates happy memories of making a special rice dish with her family and friends to celebrate the first harvest of the season. But now, like many of her generation, she has moved to a distant city for employment and laments that “for so many reasons I feel I have lost the life that I used to know and live.” From a different part of Asia, the Nicobar Islands of India, Rakhi Kumari shares the recipe for another special dish: a cake that is still part of many celebrations of the Indigenous people of Teressa.

Acquiring food is the oldest form of human work, and in their article Rebecca Wolff, Francesco D’Angelo, Gonzalo Urbina, and Malena Martínez explore different perceptions of that process within a Quechua community in Peru. The authors gave villagers cameras and asked them to take pictures of anything they considered to represent “food” or “work”; revealing differences were found between age groups and genders. Another set of cultural dynamics is center stage in Vincenzo Di Giorgi’s story about the street foods of Palermo in Sicilian Italy. He traces how these dishes reinforce local men’s sense of masculinity and self-worth and how that tradition is clashing with new market-driven pressures to turn the serving of this humble fare into curbside performances for tourists.

The continuing importance of maize in the Native food cultures of southern Mexico takes center stage in an article by Constanza Monterrubio Solís. She probes how women’s traditional roles in food production, and the economic decision making that goes along with it, are beginning to change in one community in Chiapas. In turn, Kanna K. Siripurapu and Sabyasachi Dasexplore the cultural significance of India’s native poultry. They take us to the hill country of Andhra Pradesh to delve into the many ways native breeds of chicken are used by rural communities in ceremonies and healing.

Leading the “Action” stories in this issue is another story about the value of maize in southern Mexico. Working with two communities in Oaxaca, Flor Rivera López helped start conversations between young and older members of the community on how to conserve native maize — discussions that revealed more agreement between the two groups than either had thought existed.

A new form of food-focused inspiration is underway in Russia, where Mariia Ermilova and Tatiana Ilinich organize a festival that uses time-honored tea-making techniques and associated rituals as the point of entry for reviving people’s interest in a wide range of cultural traditions.

From Kenya comes an inspiring account of how a school garden is helping bring better nutrition, and increased self-esteem, to disabled Kenyan students. Eliot Gee tells us about the Mundika Special School, where the pupils — many of whom are considered a burden to their families — have helped plant local species such as African nightshade and cowpea that are harvested for the school canteen, making unused plots of land at the school productive and at the same time boosting students’ confidence.

The last story in our print edition focuses on the capacity of the World Heritage Convention to promote traditional food production in cultural landscapes. Mechtild Rössler, Akane Nakamura, and Roland Chih-Hung Lin share the story of how a prize bestowed by the United Nations Educational, Scientific, and Cultural Organization (UNESCO) encouraged the residents of a village in Iran to see their local culture, and its interactions with the surrounding landscape, in a new, more positive light.

We are fortunate to have had a feast of good submissions for this edition of Langscape Magazine, and so we offer you two additional digital stories, available online, to round out the issue.

In a photo-and-video essay Viveca Mellegård brings us along for a journey into the foodscape of an Ethiopian Indigenous village grappling with an influx of newcomers and incipient environmental change.

In her story, Aruna Tirkey takes us back to India and relates her own journey to define a role for herself as a food entrepreneur working to revive local and Indigenous cuisine in her area.

I hope you enjoy this collection of “repasts” that our authors have set out for you. I think you’ll agree that their experiences and stories show us many ways to truly be together, sharing food, with mindfulness and caring.