In 2015, a tragedy hit Indonesia: massive forest and land fires, which blanketed the whole country with thick haze. Following this disaster, the Minister of Environment and Forestry stated that her ministry was investigating 417 companies that were responsible for fires on about 1.7 million hectares of forest. But that’s not all. The government also banned local farmers, including Indigenous people, from slashing and burning their land, as they traditionally do. In Central Kalimantan province on the island of Borneo, where I live, that ban is stopping many farmers from growing crops altogether, for fear of being punished with up to fifteen years of jail time or a fine of five billion Indonesian rupiahs (over 14,000 U.S. dollars).

Land burning has been an integral part of the cultural and economic heritage of the Indigenous Peoples of Central Kalimantan for ages.

After the prohibition of slash-and-burn agriculture came into effect, the provincial government introduced a granary program, called “Field Rice Project / Cetak Sawah,” so that Central Kalimantan would become one of the provinces producing rice as a contribution to food security for the Indigenous communities of Indonesia. Since 2016, they have targeted about 17,300 hectares of land for clearing and have collaborated with the military to implement the plan. In Katingan District alone, they have cleared 5,700 hectares. Of course, that system is very different from traditional shifting cultivation. Land burning has been an integral part of the cultural and economic heritage of the Indigenous Peoples of Central Kalimantan for ages. It has been calculated that almost eighty percent of Indigenous people in all of Kalimantan (the Indonesian portion of Borneo) practice shifting cultivation as their livelihood, which not only sustains them but also maintains soil fertility. 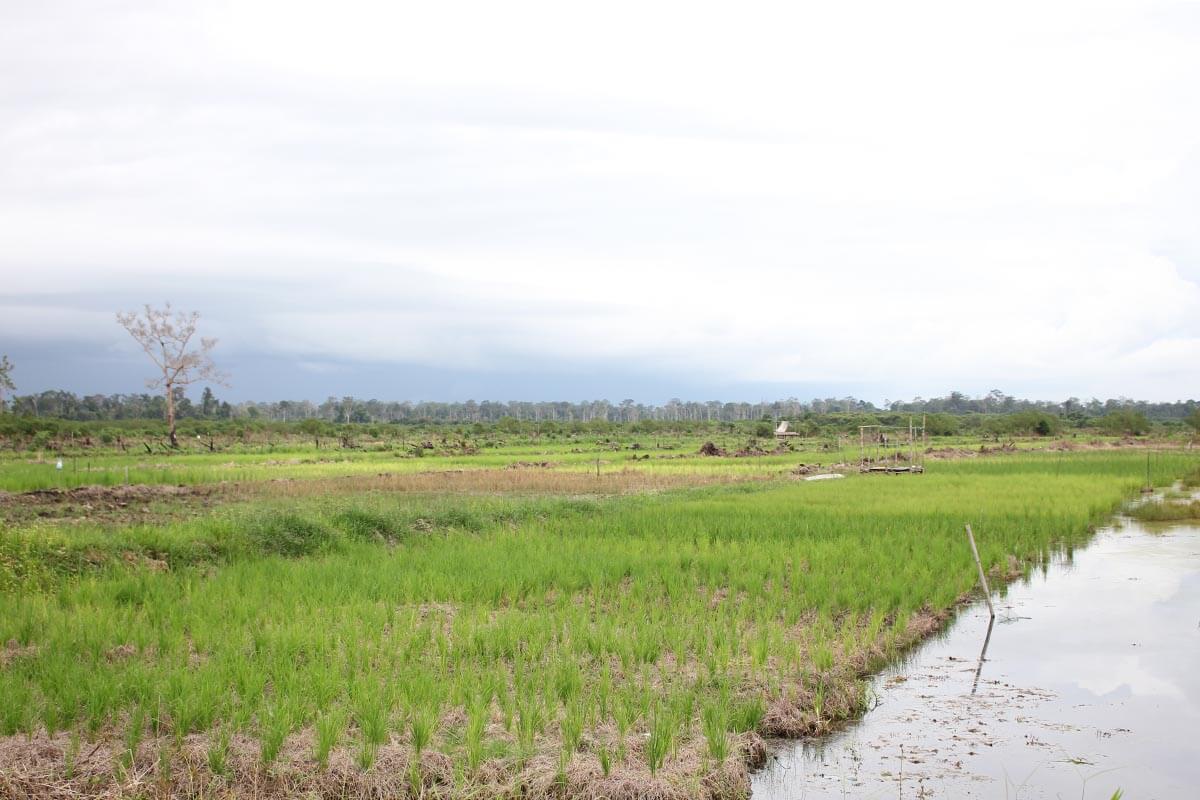 This is a story about local food and its political power, based on my own research in Tewang Karangan village, Katingan District, in Central Borneo. Tewang Karangan village is one of the largest and oldest villages in this district. Most of the communities in the district are Indigenous people from the Katingan Dayak Tribe. Their livelihood is rooted in agriculture. Because of the Field Rice Project, they had cleared 300 hectares of land in a peatland area. This prompted me to do some research on this situation. Living with Katingan Dayaks in the village for a week, I learned something very valuable about the local farming system, especially from Indigenous Dayak women, who often find themselves voiceless despite the wealth of knowledge and wisdom they possess.

‘Our lives were totally dependent on nature.’

One day, while walking with some Indigenous women toward the community’s farming area, I met a grandma, Nursi, who is 66 years old. She is not an academic with a degree in agriculture, yet her wisdom is extraordinary. She maintains and practices the traditional shifting cultivation techniques, which represent invaluable knowledge today. Nursi began telling me about the condition of her village. She said many people used to practice shifting cultivation, rotating from one plot of land to another. When a plot was in active cultivation, they would plant rice, fruits, and vegetables there. Sometimes, the men would hunt animals while the women gathered wild vegetables and medicinal herbs in the forest. “Our lives were totally dependent on nature,” she said. 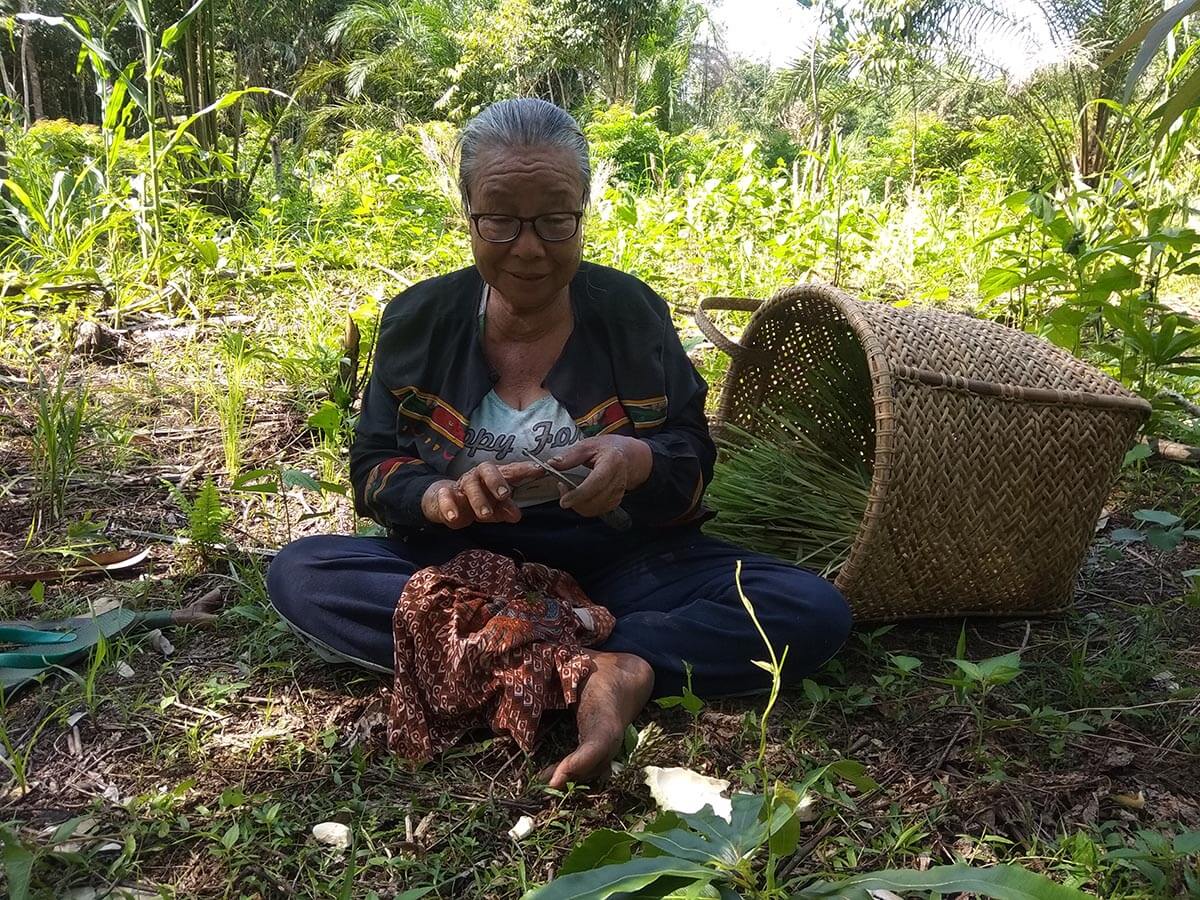 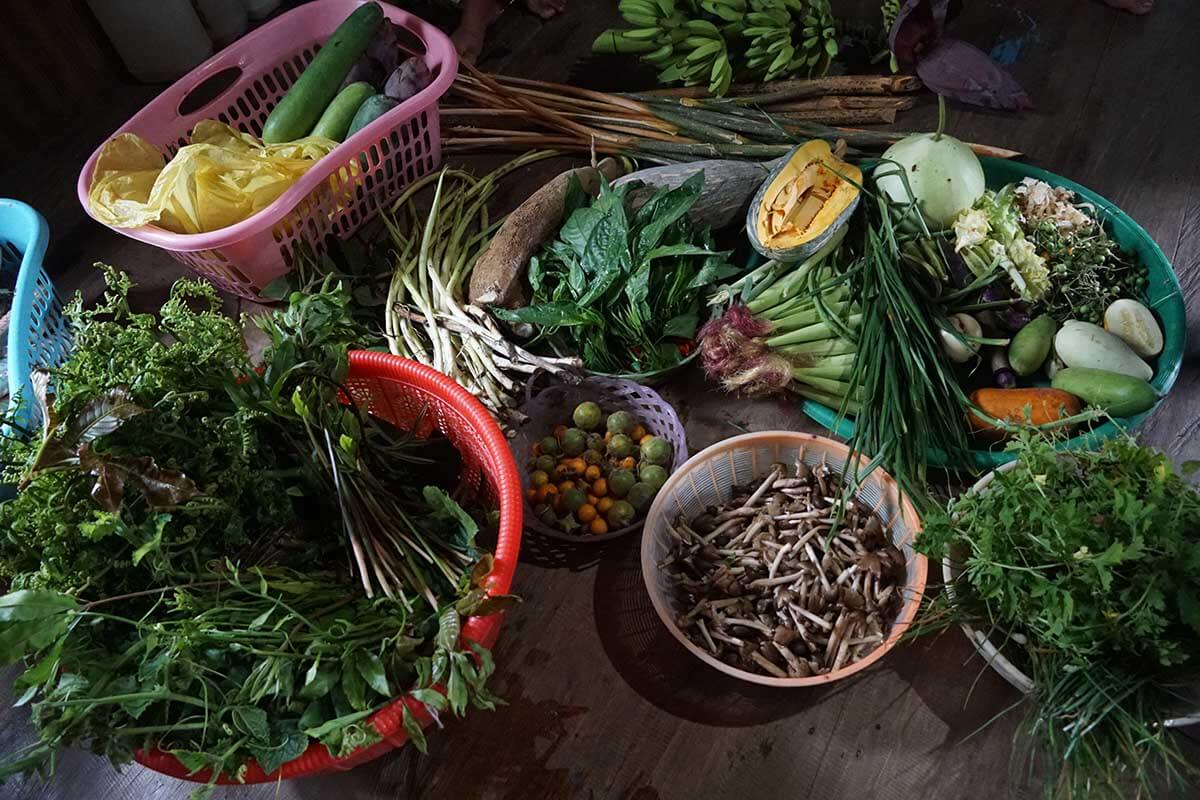 Dayak people in Tewang Karangan village had a special way of choosing an area for shifting cultivation: they knew from the birds. If they saw many birds perched in the trees, it meant that the land was fertile because many plants were thriving on the land, which allowed the birds to thrive, too. Then they would pray for the gods, called Ranying Hatalla, to ensure that land clearing would proceed smoothly, and then they would start cutting down the trees and the grass. Finally, they would gather the slashed plant material into piles before burning it.

Dayak people in Tewang Karangan village had a special way of choosing an area for shifting cultivation: they knew from the birds.

As practiced by the Indigenous community of Tewang Karangan village, slash-and-burn was carried out carefully to avoid unnecessary, widespread damage. First, they would make a fire break by digging a small trench so that the fire would not spread elsewhere. Then they would pile dried wood, grass, and branches in several places and burn the piles. It is well known that this technique is cheap, and furthermore they could use the ash as fertilizer to add nutrients to the soil.

Grandma Nursi also explained to me the planting method called manugal. When starting a field, they would plant different varieties of rice, and in every family that included the superior rice variety called upun binyi. But each family had its special kind of upun binyi, and it was like a family secret. People had a belief that they couldn’t share its name with anyone except family members because it would bring bad luck for their yields. There were at least five different varieties of rice, depending on the size of the plot of land that had been cleared at that time. In addition, they would plant vegetables such as the spinach-like segau (the Dayak name for the plant known as bayam dayak, or “Dayak spinach,” in Bahasa Indonesia), as well as lemongrass, sweet potato, and so on. Whether or not they realized it, this system too served to keep the soil fertile. 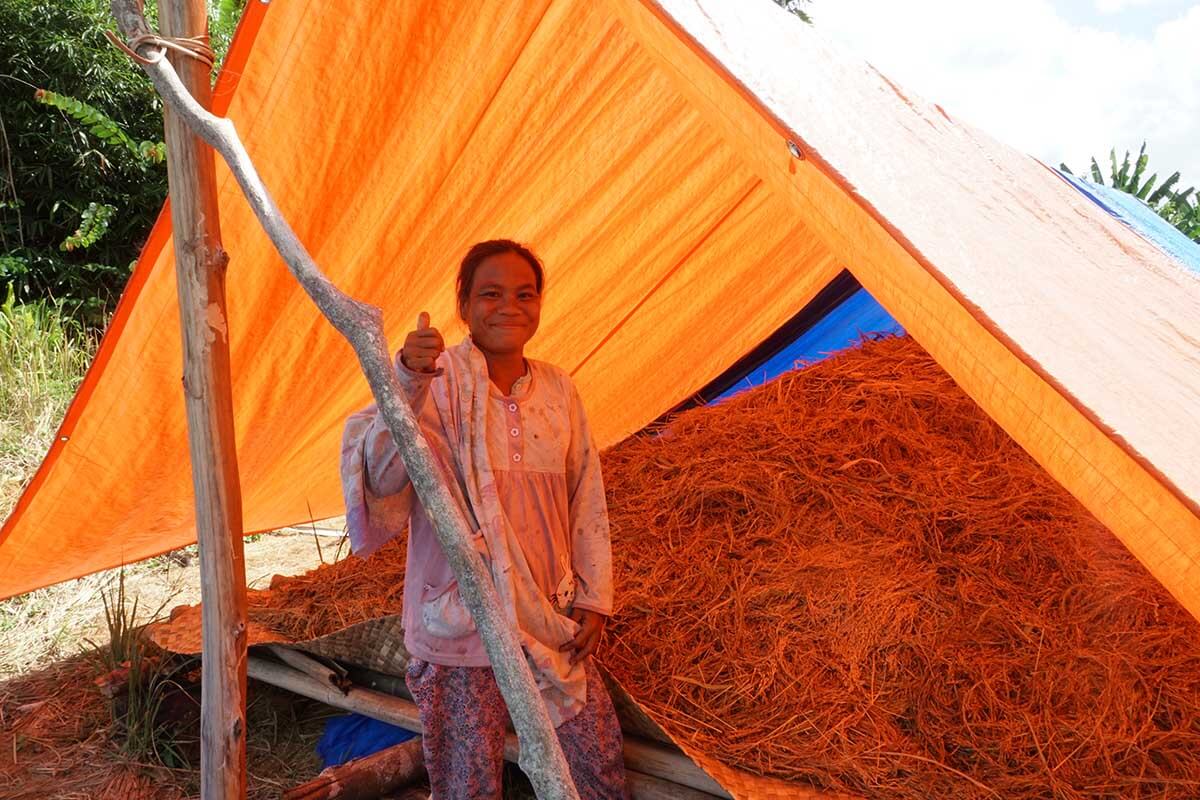 Moreover, people used traditional methods to eradicate pests in their fields. Looking at the fields, I saw many yellow flowers from segau. The flowers had a valuable function. If a bird came to the field to eat the rice, it would be fooled by seeing the yellow flowers, which look like rice, and would start eating the flowers instead of the rice. To protect rice from brown planthoppers, a major pest for rice, they sprayed the rice with tobacco water or garlic water. If there were mice that wanted to eat the rice, the first thing they would eat was actually the sweet potatoes.

Then there was the sequence for planting types of rice: they started by planting seeds of the more ordinary varieties around the outer perimeter of a field and ended by planting upun binyi in the center of the field so that their most prized variety would be protected by other types of rice surrounding it. That is one of the reasons they planted different types of rice in a single field.

“That is the simple knowledge from my ancestors from many years ago,” said Grandma Nursi. When I heard all this, I was very impressed with the local wisdom of the Dayak people of Katingan Tribe.

Grandma Nursi said that she and her family still practice the shifting cultivation but not in the same way as in the past. Earlier, they had three different areas for it. Every three to four years, they would move to another field so that the previous field could regenerate and become fertile again. That reminded me of scientific articles I read about shifting agriculture, which explained how a plot of land is cultivated only for a few years, after which the land is allowed to go fallow so that the soil may recover all its nutrients, and how people’s dependence on the forest as their main source of livelihood ensures that they will prevent fires from spreading out of control and damaging the forest. That was the reason why I never heard Grandma Nursi mention that they used artificial fertilizers: traditional shifting agriculture allowed them to both sustain themselves and keep the land healthy. 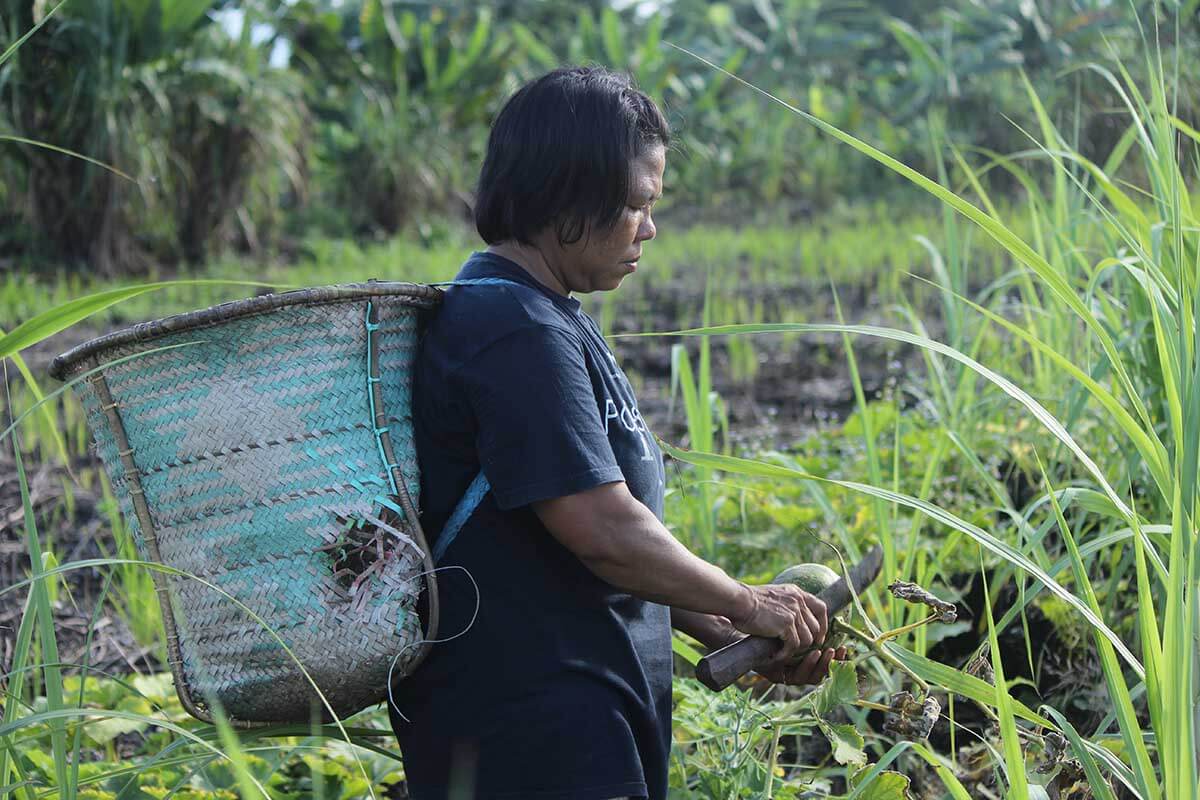 Instead, Grandma Nursi said that the government program wasn’t appropriate for their lands because it did require the use of artificial fertilizers, and they would need money to buy the fertilizer after the end of the program. Plus, the quality of the rice provided by the program was inferior to that of the local rice, even though she could harvest it twice a year. While practicing shifting cultivation, she only harvested once a year, but it was worth it. “I don’t want to be greedy and sacrifice the forest for yields. Besides that, my worry is that nature will not be friendly with us anymore because of the people from the government program.”

Traditional shifting agriculture allowed them to both sustain themselves and keep the land healthy.

After talking with Grandma Nursi, I realized how an Indigenous community practices agriculture traditionally—even without artificial fertilizers—not only to sustain themselves but also to resist the misguided modernization of their land by giant corporations and the government’s program. They also prove that their crops can serve not only to meet the needs of their households but also to find a source of income. They have become one of the villages that supply vegetables to the province’s main city, Palangka Raya, and to other areas. 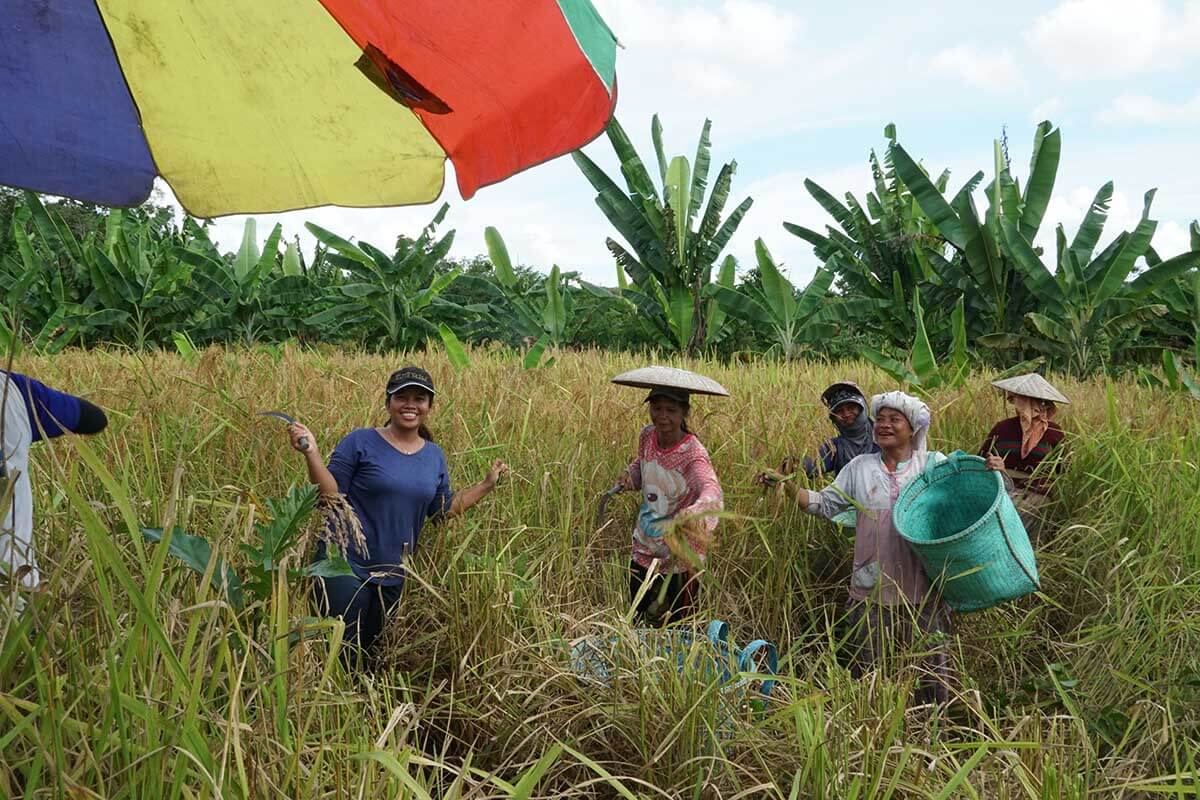 I hope we can learn the lesson that the haze tragedy in 2015 wasn’t the fault of the local farmers and Indigenous Peoples, but rather that many factors contributed to making it happen. I also hope that the government can be on the side of the communities, looking at and listening to what they need but not accusing them of being predators of the forest too. What Grandma Nursi and other Indigenous people are doing now is building resilience to confront and resist undemocratic regulatory changes and privatization of their own lands through action, not words. In a way, farming is fighting!

Back to Vol. 9 | Read the Table of Contents |  Back to IYSC | Like Our Stories? Please Donate! 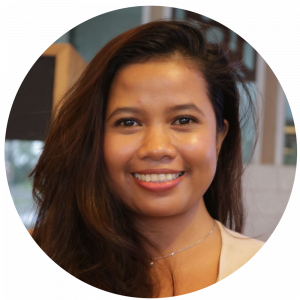 Meta Septalisa is from the Dayak Ngaju tribe of Borneo. She is an environmental activist who focuses on community development and empowerment. She has been working with Indigenous communities, particularly women and children, since 2014, using research, education, and community organizing methods.