Finding Resilience in the Time of COVID-19: The Pahari Bamboo Weaving Craft in Nepal

About twelve kilometers southeast of the city of Lalitpur in Nepal, an urban village called Badikhel sprawls over an area of nearly six square kilometers. Surrounded by a dense forest, the village harbors about 3,600 members of an Indigenous community, the Pahari, whose unique dialect, Pahibhae, has roots in Nepal Bhasha, the ancient language spoken by the Newah ethnicity of Nepal. 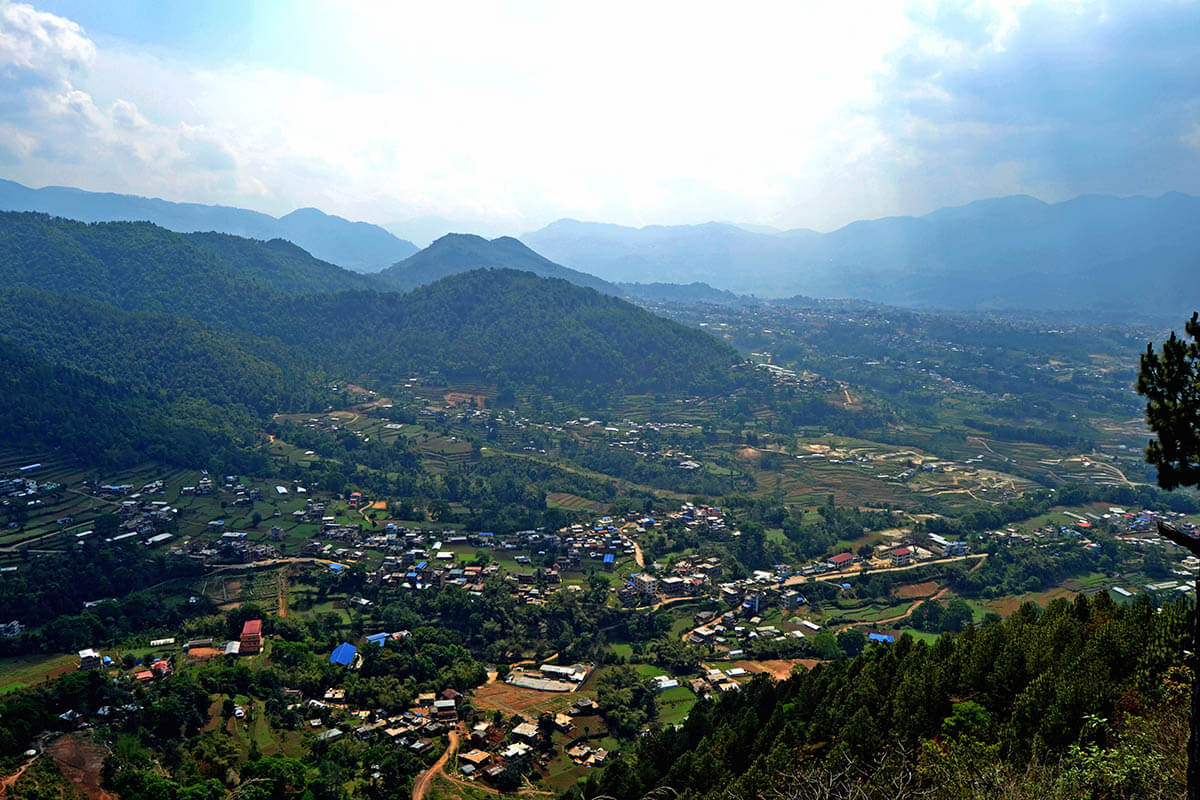 Aside from seasonal agriculture, Pahari make a living by practicing a traditional bamboo weaving craft and selling their wares. According to local sources, more than half of the Pahari population is still completely dependent on the income generated by sales of household items such as kitchenware, furniture, and other handicrafts made of bamboo. The bamboo craft may account for up to seventy or eighty percent of the community’s total income. 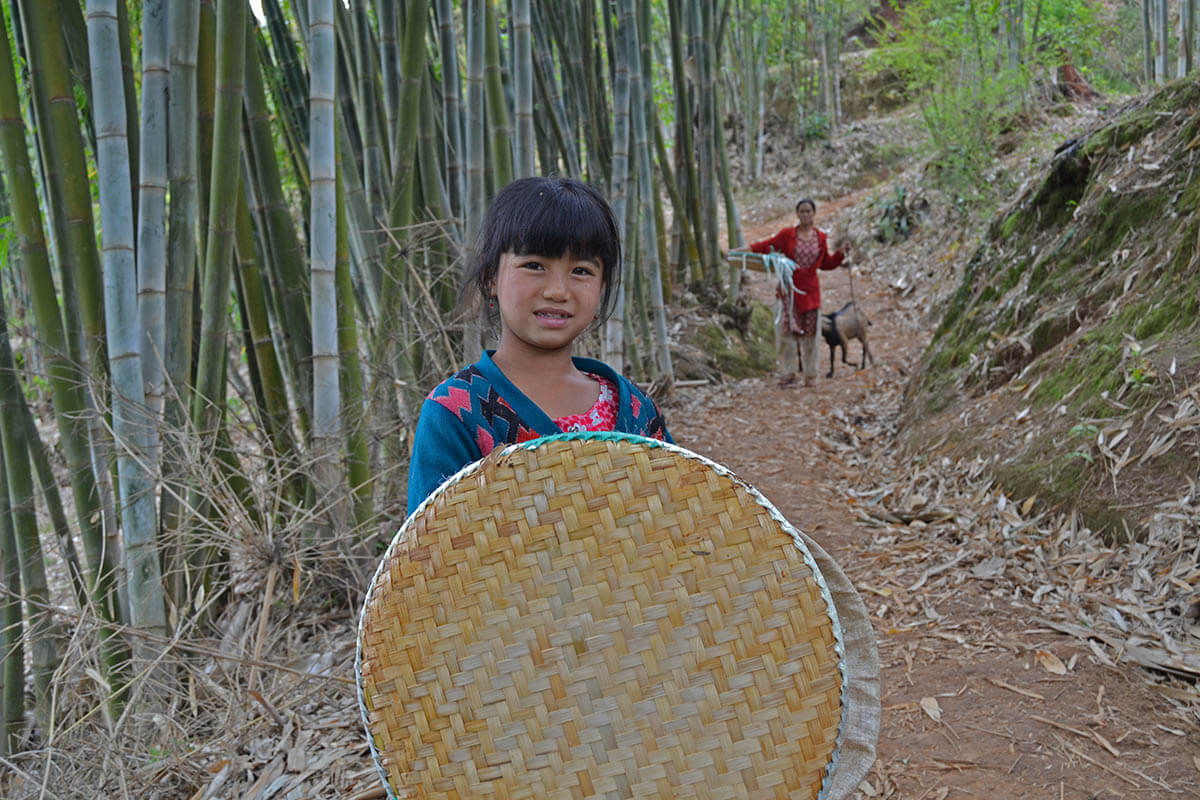 A 10-year-old girl carrying a nanglo (a flat round woven tray used to sieve and winnow rice, lentils, and beans) is on her way back from the forest with her mother. During the pandemic lockdown, girls in particular have been helping their mothers with the bamboo craftwork. Photo: Dipendra Deshar, 2020 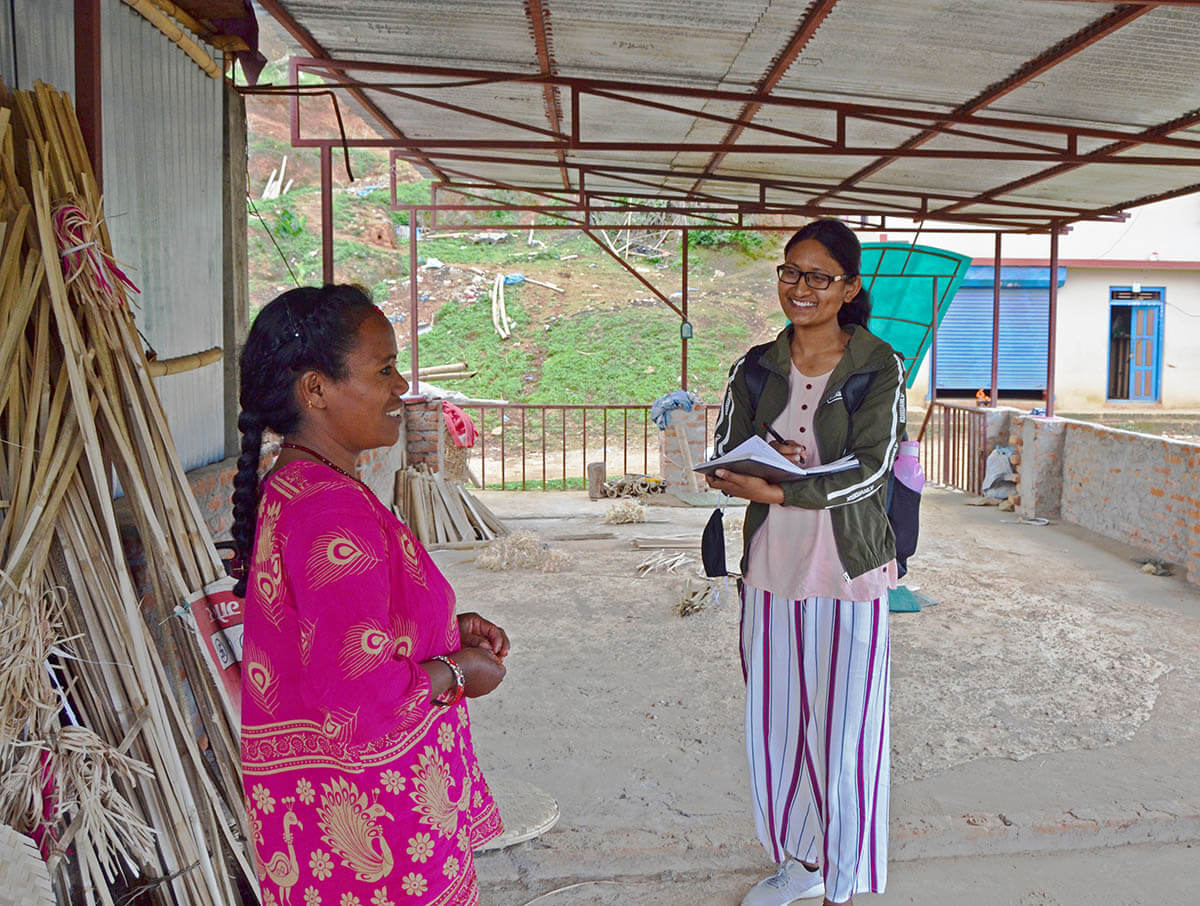 Tara Pahari (left), who has been weaving bamboo since she was 18 years old, shares with Manju Maharjan her experience of making bamboo crafts and how it has supported her family and the education of her two daughters. Photo: Dipendra Deshar, 2020

Nepalese regard two typical bamboo objects—the nanglo, a flat round tray used to sieve and winnow grains and beans, and the dalo, a conical basket used to store grains—as symbols of prosperity and well-being that a Nepali kitchen can’t be complete without. A well-finished, normal-sized nanglo costs about USD 3.50 and a book rack about USD 10. 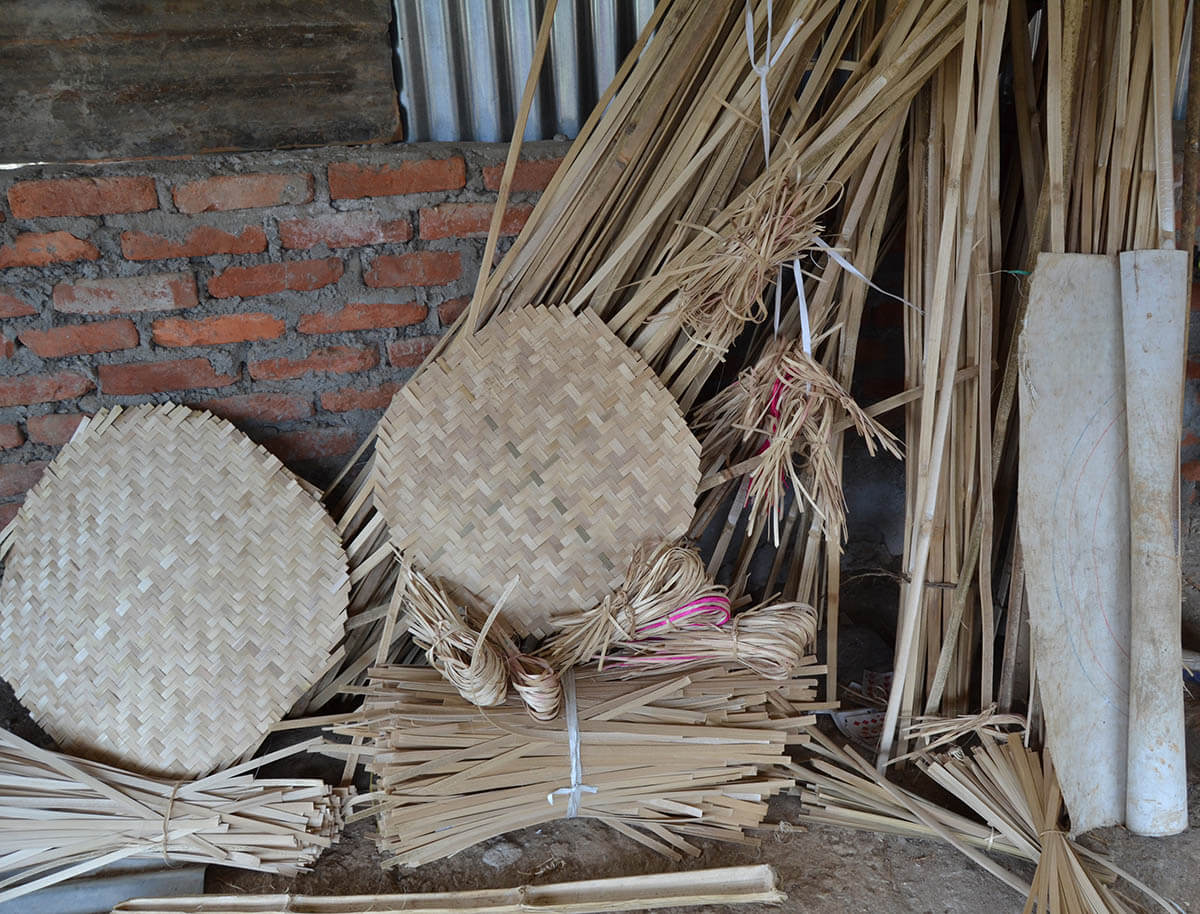 The artisans sell their products to the dealers who supply shopkeepers in Lalitpur and Kathmandu. Regardless of the fact that there are cheaper plastic alternatives, the market for bamboo products is still thriving because of the traditional value of kitchenware such as nanglo and dalo. Moreover, bamboo furniture is considered to have high aesthetic value and is prized for home furnishing.

Regardless of the fact that there are cheaper plastic alternatives, the market for bamboo products is still thriving. 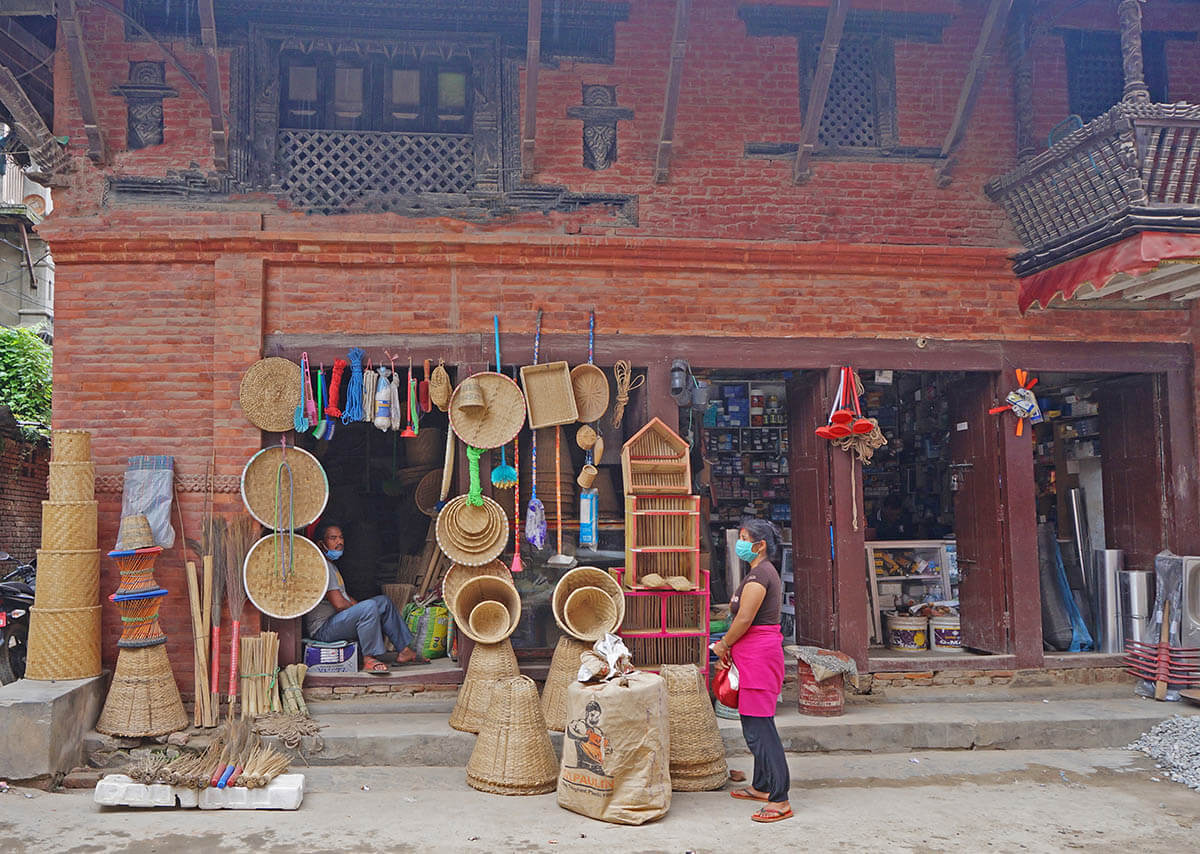 An array of bamboo products such as nanglo (tray), dalo (basket), and doko (conical carrier) displayed outside a shop in Mangal Bazaar, Lalitpur. The demand for dalo and nanglo is high during festivities, due to the cultural significance of these kitchenware items. Photo: Sheetal Vaidya, 2020

In spite of the commercialization of the bamboo craft, however, traditional weaving skills have become increasingly limited to the older generation. At present, younger Pahari craftsmen have lost many of the techniques their forefathers practiced to create beautiful artifacts. Some of the older craftsmen do seek to pass on their traditional skills. One such person is Aarsingh Pahari, 66, who is happy to teach his son whatever he has learned from his own father. In turn, his 33-year-old son Santosh is pleased to take up the family profession. 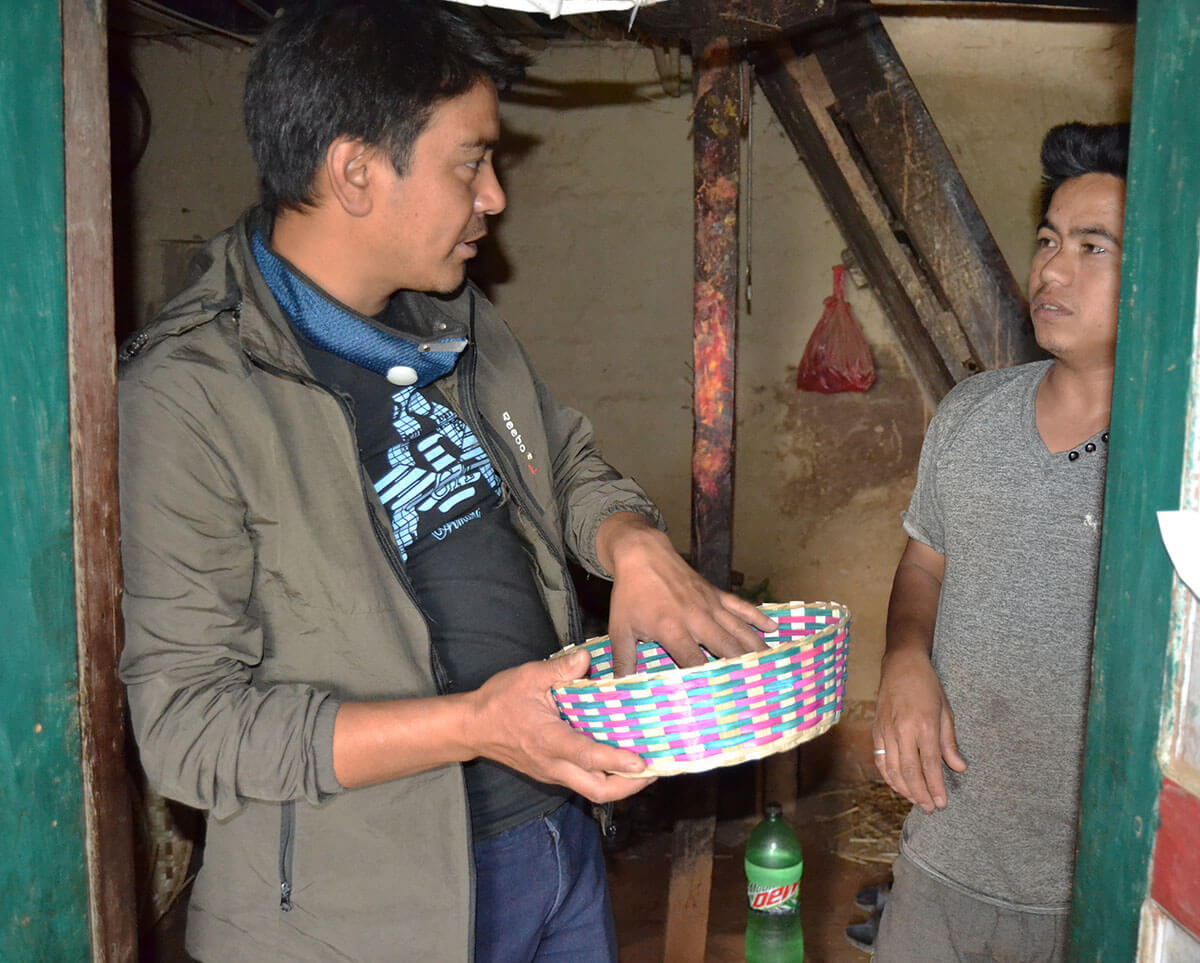 Visitor Dipendra Deshar (left) in conversation with Santosh Pahari (right), a young man actively involved in the bamboo craft, about the preparation of a flower basket. Photo: Manju Maharjan, 2020 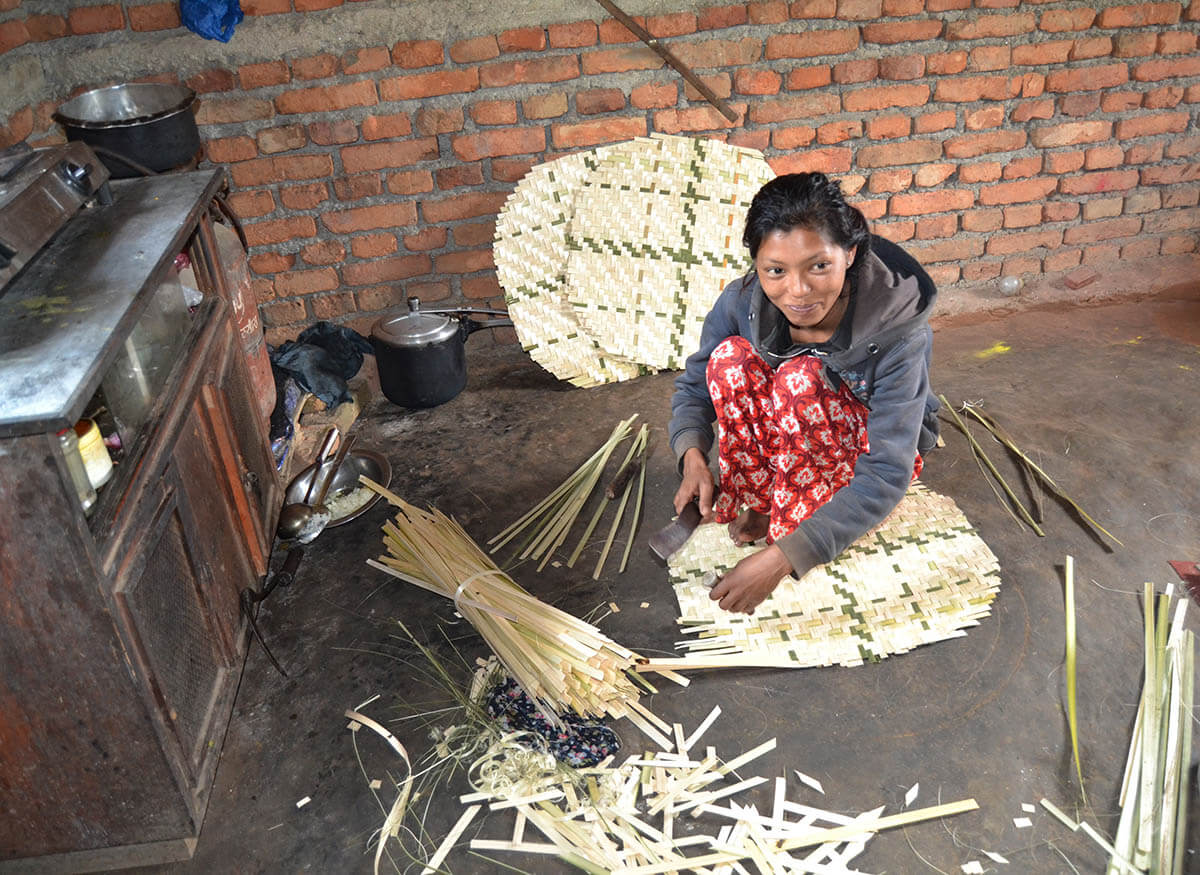 Aamali Pahari, a 21-year-old, weaving bamboo. She has become fully engaged in this line of work since finishing high school. She is happy to continue the traditional profession, and in doing so, she is able to financially support her family. Photo: Dipendra Deshar, 2020

The traditional method involves handling a few simple tools to create a number of extremely useful objects from bamboo. These tools are chupi, a sharp knife, tasha, a wedge, and suiro, a huge needle. The traditional knife cuts and slices the bamboo into pieces that give life to a variety of products. There is a cultural taboo according to which cutting a very young bamboo shoot is a capital sin that would bring bad luck to the whole village. This belief has contributed to the healthy growth and conservation of bamboo groves, which occur naturally in the surrounding forest.

There is a cultural taboo according to which cutting a very young bamboo shoot is a capital sin that would bring bad luck to the whole village. 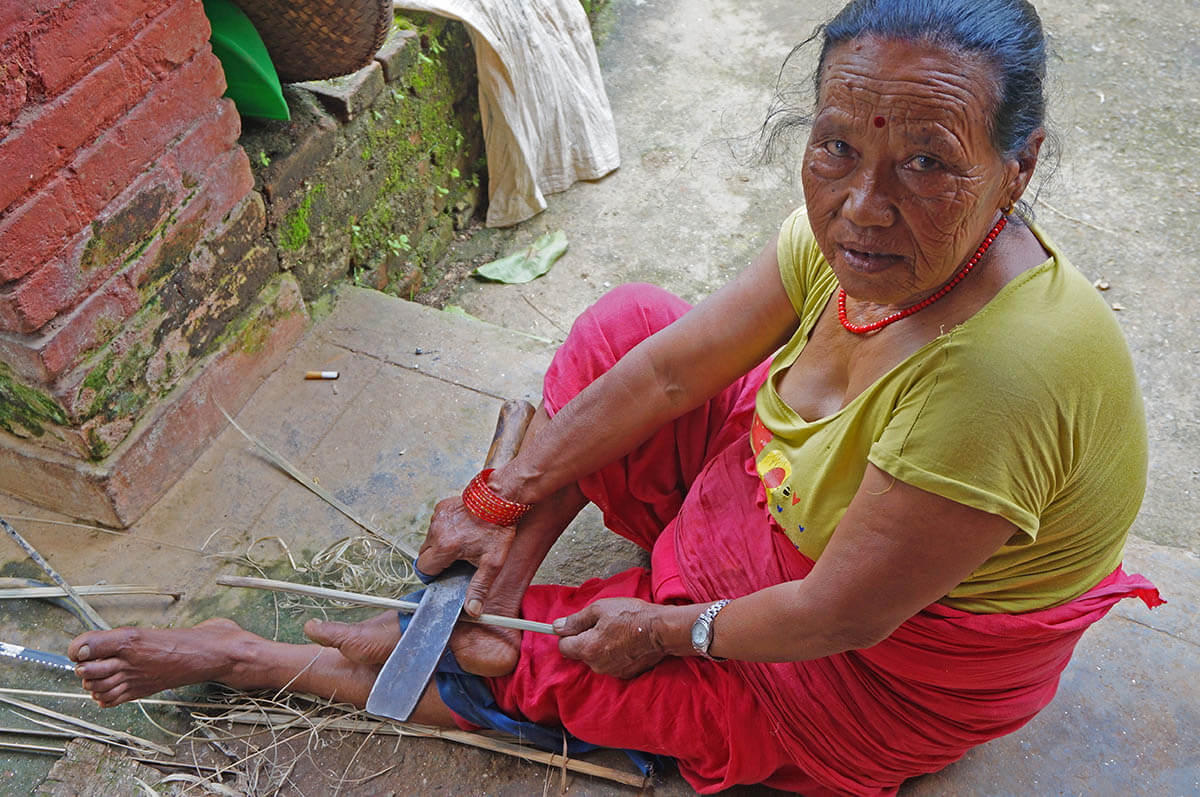 Sri Kumari Pahari, a 67-year-old, looks curiously at us as we take pictures of her slicing bamboo with a chupi (knife). All the work of cutting, slicing, flattening, sharpening, and giving shape to the bamboo is done manually, using basic hand tools for the entire process. Photo: Sheetal Vaidya, 2020

After the devastating earthquake of 2015 in Nepal, it became popular to build earthquake-resistant bamboo cottages to replace crumbled masonry buildings. According to 30-year-old villager Surendra Nagarkoti, many young members of the community have since taken up cottage construction as their profession. He thinks that they would benefit from using a machine to slice bamboo, which will make their work go faster. This new application of the bamboo business helps sustain the traditional bamboo craft. 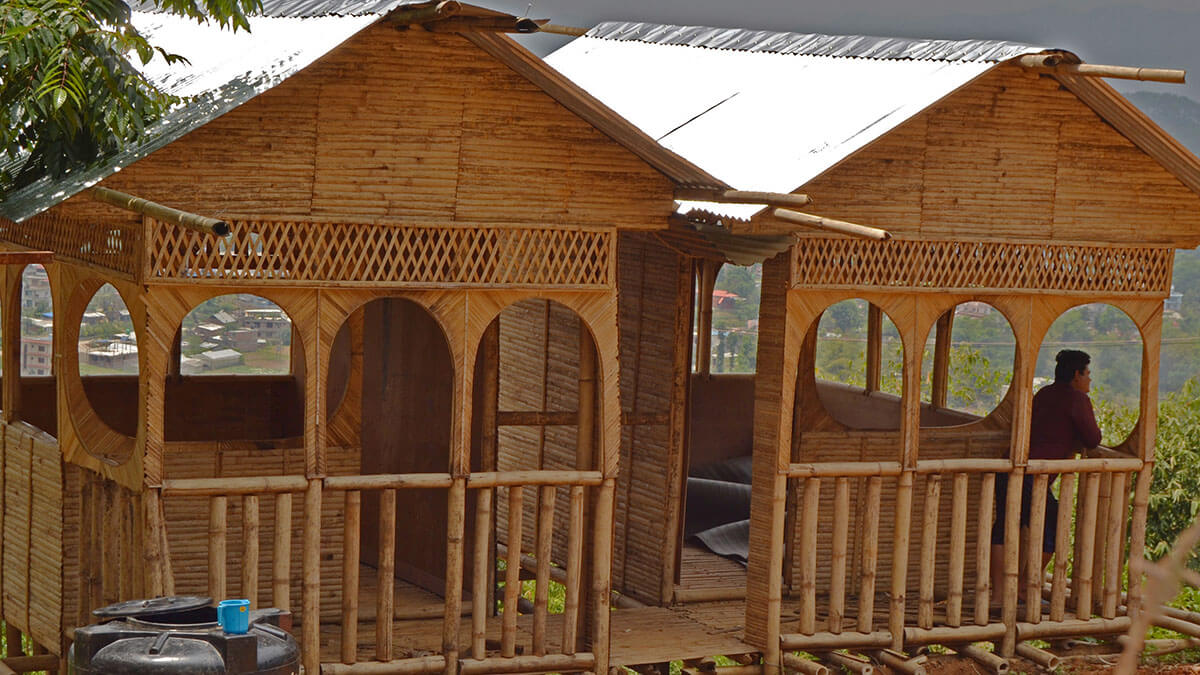 An artistic bamboo cottage under construction on the way to Tapkeshwor Mahadev Temple, situated at the top of an uphill trail through the forest, about 45 minutes on foot from the village. Photo: Dipendra Deshar, 2020

With success in the business, however, comes the need for more bamboo. As the natural regeneration of bamboo in the forest can take three to four years, and since buying bamboo materials from the market is increasingly expensive, villagers are now motivated to grow more bamboo in open spaces or in their own backyards.

Since buying bamboo materials from the market is increasingly expensive, villagers are now motivated to grow more bamboo in open spaces or in their own backyards. 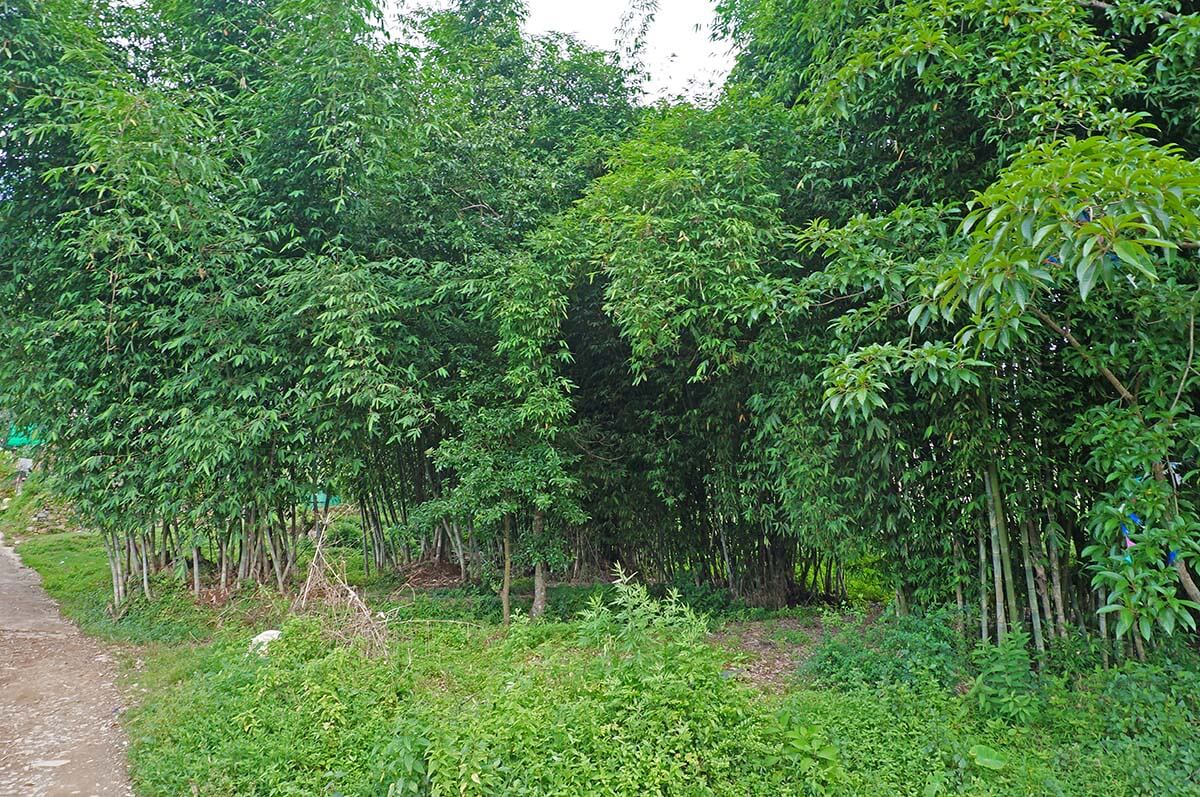 Because of a limited supply of bamboo from the forest, people have taken up cultivating bamboo on their private lands to sustain their traditional bamboo business. That has helped them avoid buying expensive bamboo materials from the market. Photo: Sheetal Vaidya, 2020

For now, the COVID-19 pandemic has had an unexpected effect for the Pahari community: it has led people to practice their craft more, since they can do it in their own backyards and all that is needed is the bamboo plant plus those simple tools. The whole family, including both older and younger members, now works together to create more products to be sold when things return to normal. Paradoxically, thanks in part to COVID-19 and the 2015 earthquake, traditional Pahari bamboo weaving may still have a bright future.

Paradoxically, thanks in part to COVID-19 and the 2015 earthquake, traditional Pahari bamboo weaving may still have a bright future. 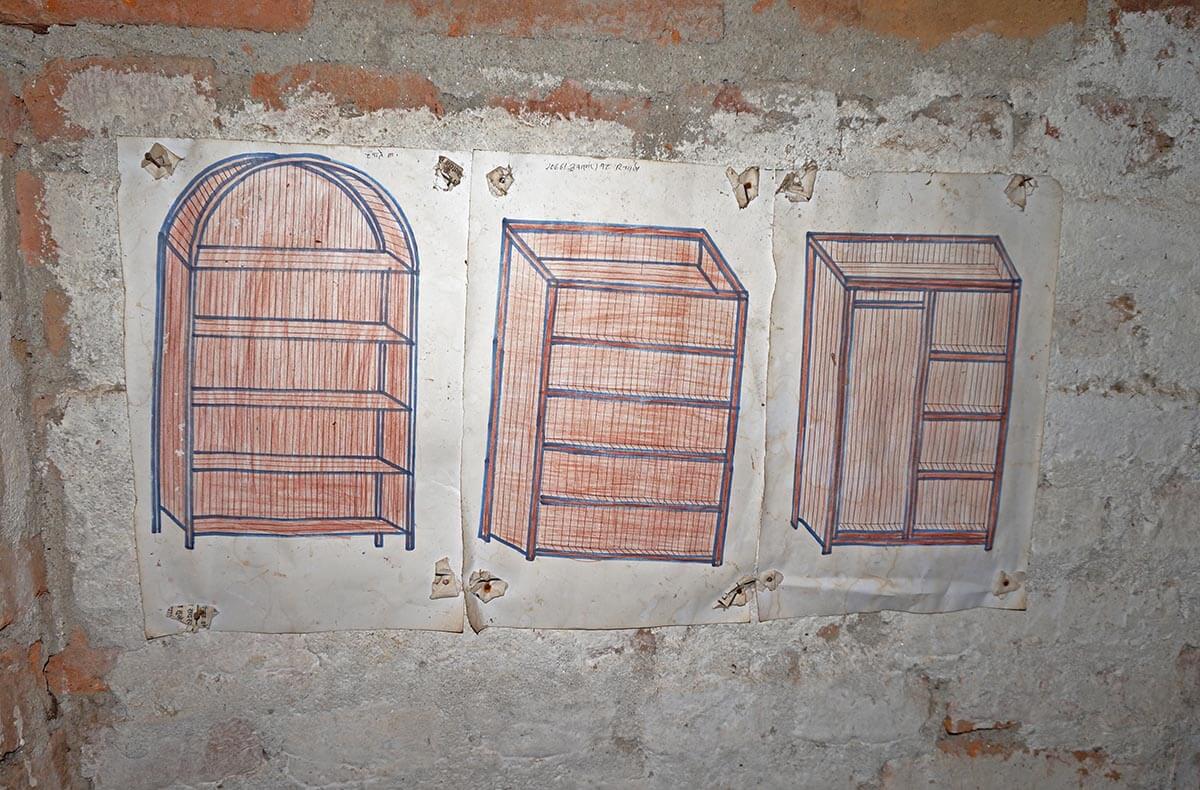 Sketches of different types of bamboo racks drawn by children. This demonstrates the children’s love for their traditions. Photo: Sheetal Vaidya, 2020 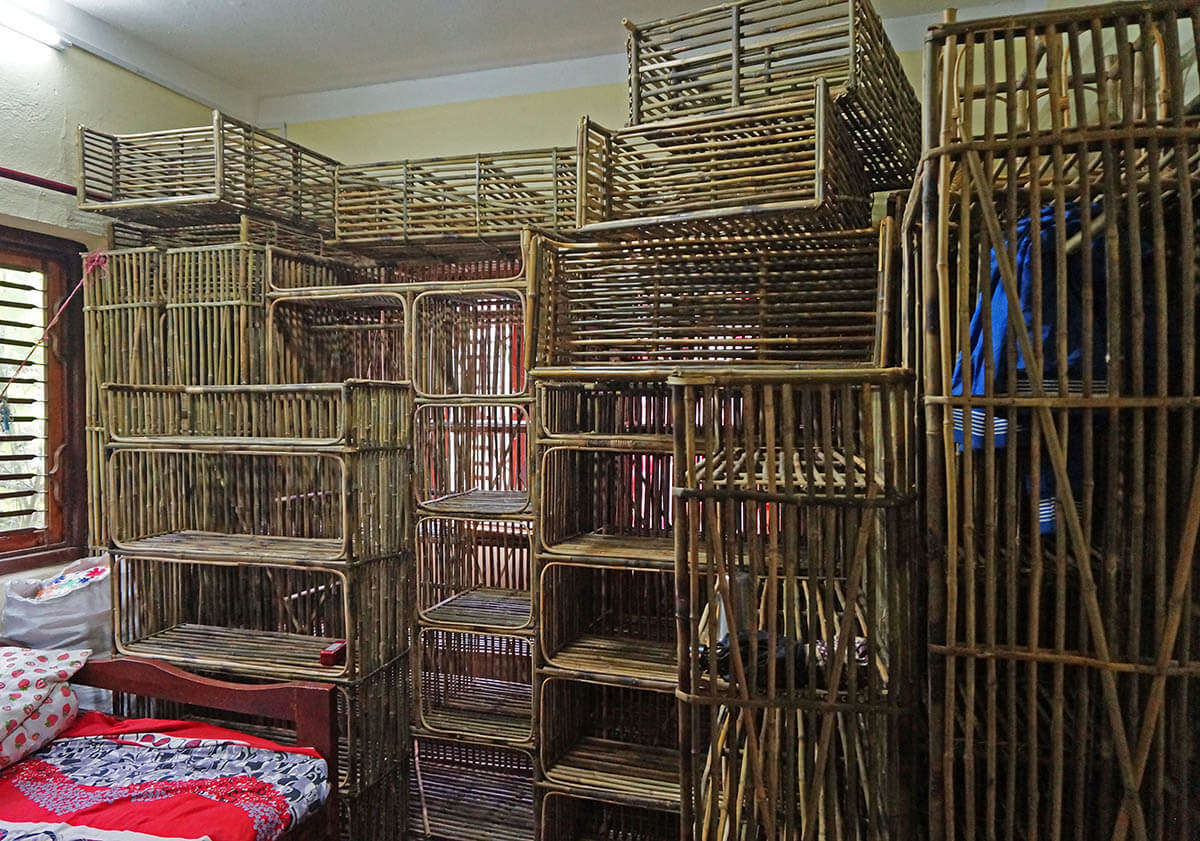 Bamboo crafts such as shoe racks and book racks stocked in a store. Due to the pandemic lockdown, villagers have been unable to take their products to the market, but have continued to make their wares in anticipation of the easing of restrictions. Photo: Sheetal Vaidya, 2020 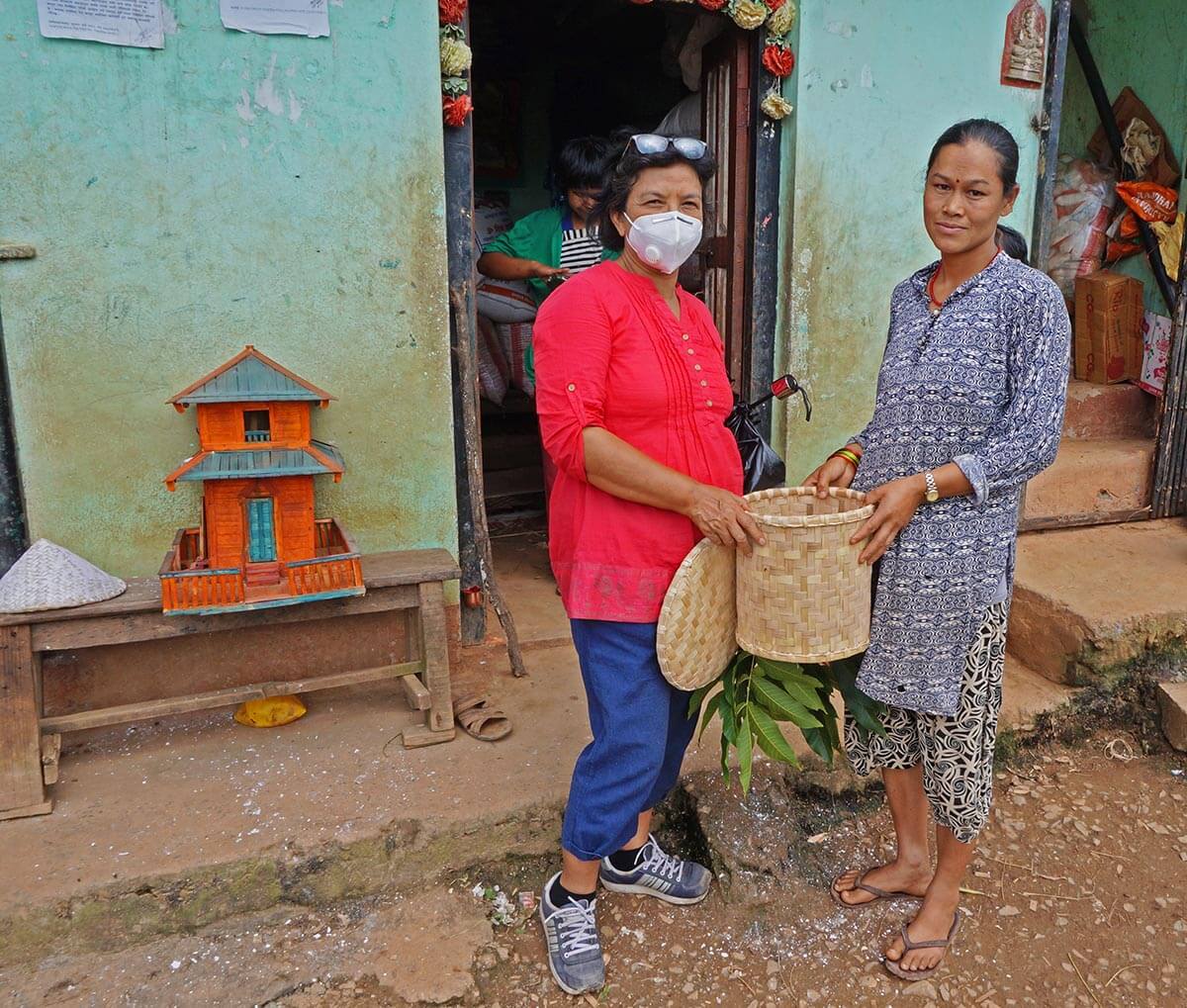 Sheetal Vaidya buys a bamboo dustbin and a nanglo at the end of our visit—a good way to help promote and support the local business. Photo: Manju Maharjan, 2020 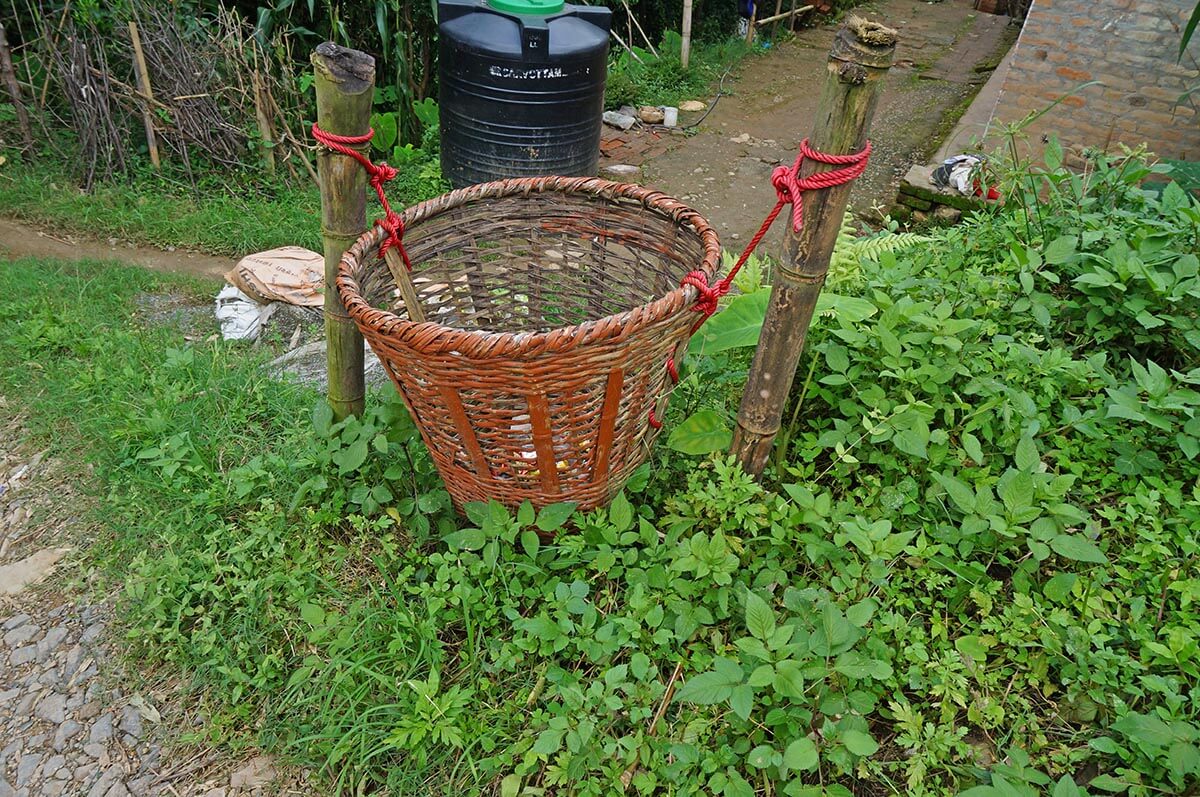 A doko, a cone-shaped bucket generally used by porters to carry goods on their back, serves here as a community dustbin. Villagers tend to replace plastic dustbins with locally made bamboo objects like this doko. Photo: Sheetal Vaidya, 2020 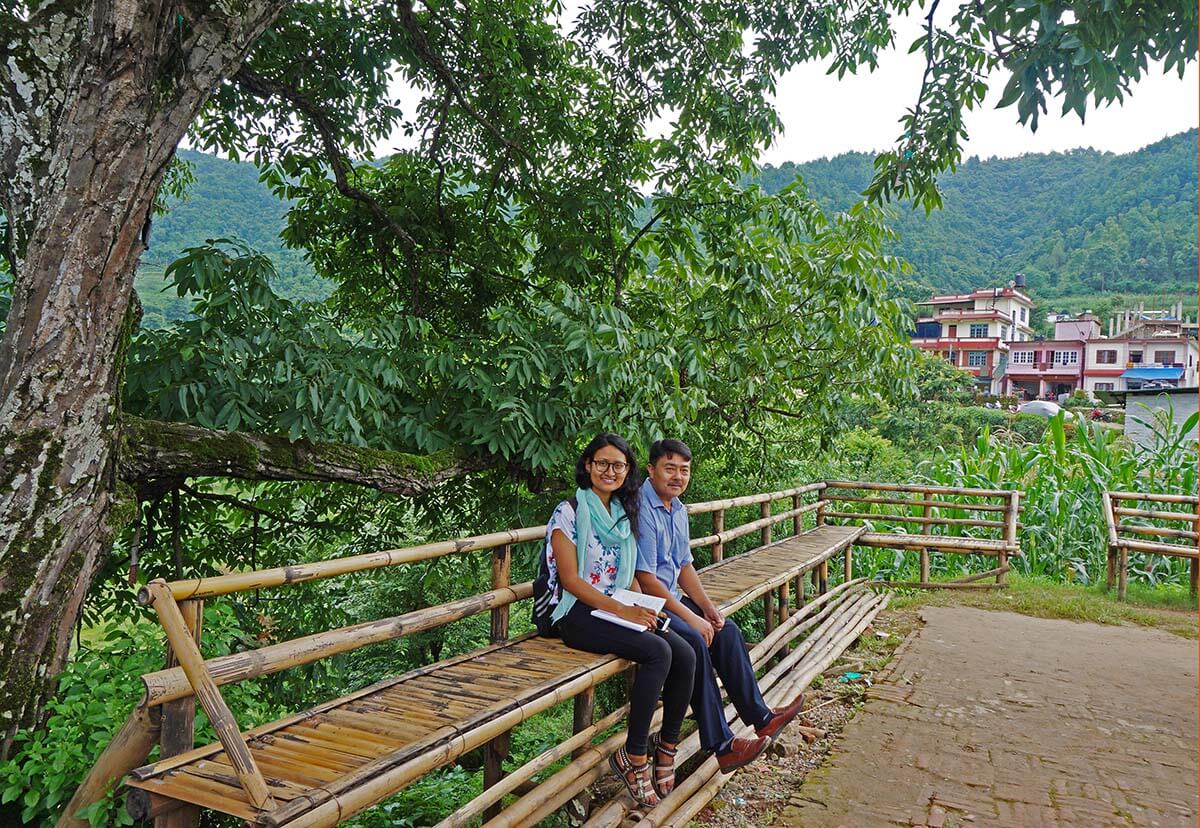 After visiting the village, Manju Maharjan and Prakash Khadgi rest on a bench made of bamboo. There are many such rest stops throughout the village. Photo: Sheetal Vaidya, 2020

Back to Vol. 9 | Back to IYSC | Read the Table of Contents | Like Our Stories? Please Donate!

Acknowledgments: We appreciate the input provided by the Pahari community of Badikhel, Lalitpur, Nepal, and thank them for welcoming us to their homes and backyards and sharing with us detailed information on their traditional bamboo weaving craft. We are grateful to local villagers Manisha Nagarkoti and her brother Surendra for guiding us around the village. We also acknowledge and appreciate Mr. Dipendra Deshar for accompanying us and providing insightful digital images that have helped us to share their story with the world. 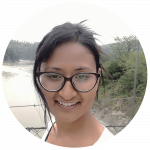 Manju Maharjan is an Indigenous Newah with a bachelor’s degree in botany. She is an avid researcher of Newah language and culture, aspiring to pursue a PhD degree on the biocultural diversity of Nepal. She has been contributing articles to various magazines since 2018. 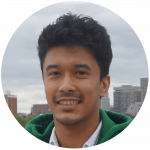 Yuvash Vaidya, also an Indigenous Newah youth, is a performing artist with an advanced diploma in Western classical performance. He is enthusiastic about promoting Newah art and culture and aspires to become an oriental jazz musician 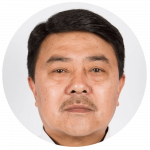 Prakash Khadgi is Associate Professor of Botany at Patan Multiple Campus, Tribhuvan University, where he has taught for 27 years. An Indigenous Newah, his interests include the preservation of the cultural and natural heritage of Nepal. 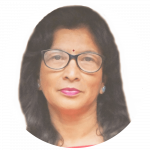 Sheetal Vaidya, PhD, is also an Indigenous Newah. Her research interests lie in a wide range of subjects such as plant systematics, arts, and biocultural diversity.