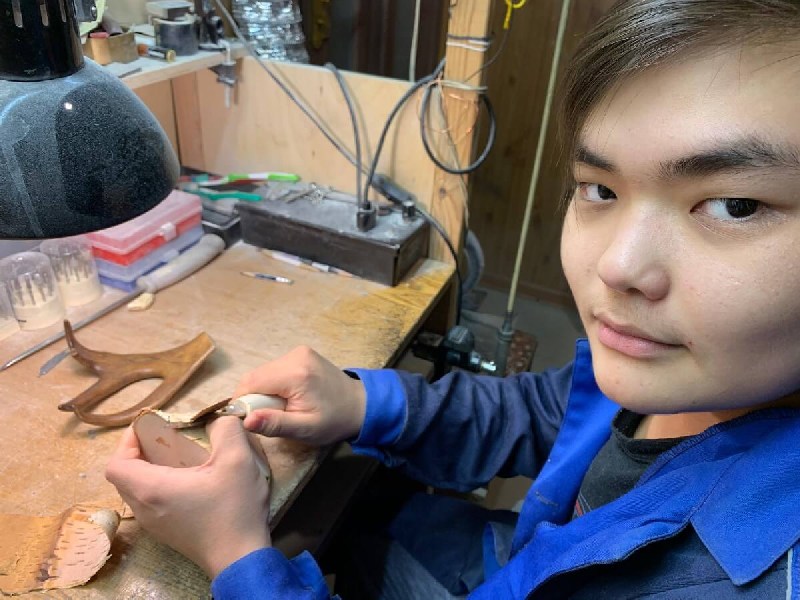 Mammoth tusk is a hard material — just like life is in the Arctic. Vova started carving when he was an infant in the Nenets tundra. Photo: Galya Morrell, 2019

I started carving when I was five. But even before that, I saw mammoth tusks in our Nenets tundra and played with them: they were my toys. I watched my father carving. I saw plain bones magically transforming into animals, humans, and spirits. I was intrigued by the magic of transformation. I wanted to become a magician myself. My brothers and sisters chose to become doctors. They loved our tundra, but they didn’t want to continue the tradition. I don’t judge them. But then I thought: I’m the only one left. I’m the youngest one. So, I decided to stay and become an artist.

My brothers and sisters chose to become doctors. They loved our tundra, but they didn’t want to continue the tradition. I thought: I’m the only one left. So I decided to stay and become an artist. 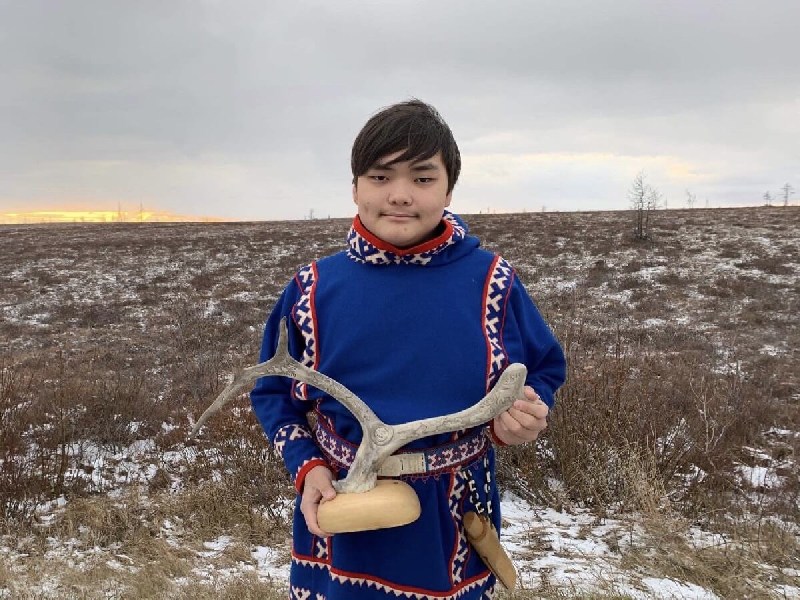 Vova Iadne was born in the Arctic. He learned this art from his parents, Inna and Victor Iadne, the famous Nenets carvers from the Yamal Peninsula. Today he gives workshops at Aboriginal fairs all across Russia, including in downtown Moscow, teaching children and their parents how to carve.

Carving mammoth tusk is a difficult job. I tried to learn from Vova — with little success. Carving requires precision, patience, and, most importantly, knowledge of the world of nature. Vova knows this world better than anyone: he was born above the Arctic Circle.

Vova says that he became an artist when he saw his father carving a sculpture in which a polar bear is warming up a human “cub” frozen in a blizzard. It is said that encounters of this sort were common in the days when there was no boundary between animals and humans, when they shared the same home and lived in it like brothers and sisters.

From that moment on, he wanted to tell stories long forgotten — yet so much needed in the modern world. 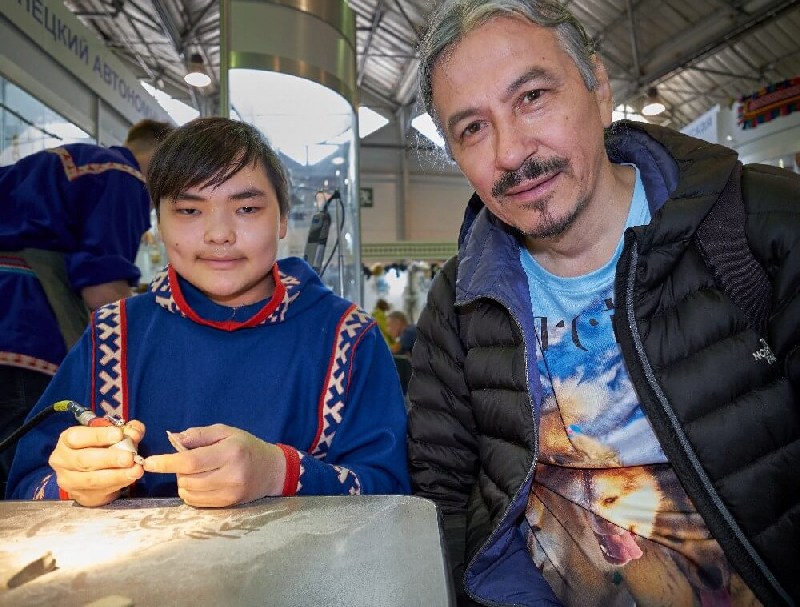 Vova Iadne is listening to the stories told by Greenlandic Inuit elder Ole Jorgen Hammeken, while working on a sculpture of a polar bear. Photo: Galya Morrell, 2019

In winter, snow covers everything — it’s a magical world, where everything is hidden under the white canvas. I guess everyone who was lucky enough to be born here will become an artist. I am looking at the old huts, roads that lead to nowhere, elders walking up the streets, and birds frozen in the sky. My grandparents are living the nomadic life and traveling with them by reindeer gives me a completely different perspective on the modern world.

I carve because I want to keep the past and bring it into the future. The mammoth tusks found in our land tells stories. I want to tell my own stories, which are deeply rooted in my heritage.

I carve because I want to keep the past and bring it into the future.

Left: A baby woolly mammoth, traveling through the universe on an ice floe, is one of Vova’s favorite subjects. Right: Made out of mammoth tusk from the Nenets tundra and black wood, an Arctic goose looks for its way in a melting world. Artwork: Vova Iadne. Photo: 2019

As I talk to Vova, he is working on his new narrative, “A Boy and His Fish.” A boy catches a fish; he is happy and yet confused. He feels sorry for the fish, but his little dog is hungry and asks for food. What should he do? If he feeds the fish to his little dog, his dog will then love him, protect him, and one day may even save his life. On the other hand, if he lets the fish go, then he will get everything from the Universe, whatever he wishes for. The stars lying under the boy’s feet remind him of eternity. This is a hard dilemma in the Arctic.

I don’t have complete answers to all the questions. At some point, I too wanted to become a doctor like my brothers. But if everyone leaves, our culture and language will be gone much sooner than you think. 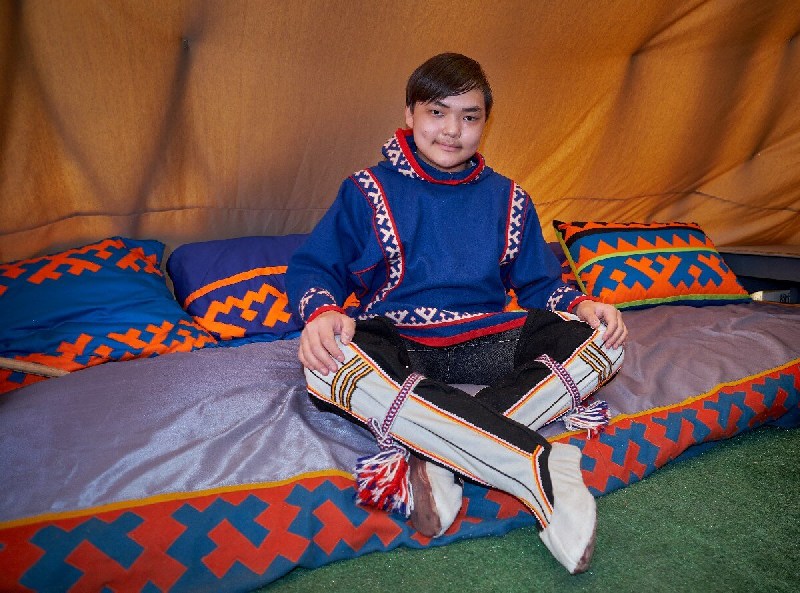 Vova Iadne is getting ready for the day in the chum, a portable nomadic home driven across the tundra by a team of reindeer. Photo: Galya Morrell, 2019

At some point, I too wanted to become a doctor like my brothers. But if everyone leaves, our culture and language will be gone much sooner than you think.

Vova Iadne is a 16-year-old Nenets artist from the Yamal Peninsula of northwestern Siberia. He learned to carve mammoth tusks at age five from his parents, famous Nenets carvers. Today he holds carving workshops at Aboriginal fairs all across Russia..