In the heart of the Amazon Rainforest, along the Xingu River and one of its tributaries, the Iriri, traces of an ancient, vanished population are found. The petroglyphs carved in the rocks tell a ghost story—faint echoes of faded voices that today we struggle to imagine alive. 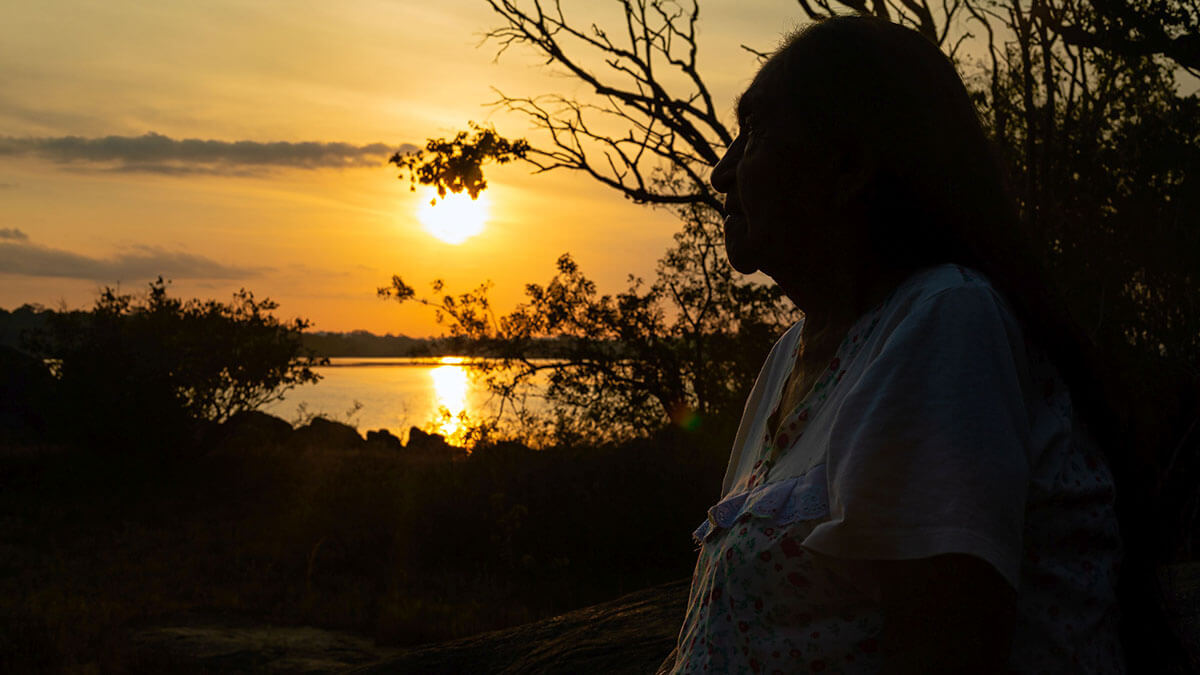 The sun rises over the Xingu River, on the lands of the Kuruaya, as Iawa looks on. Photo: Miguel Pinheiro, 2019

A language can be a map or a memory. A cosmogony or a requiem. In Greek, logos means both language and thought. When a language dies, it only leaves behind the silence of the rocks. Traditions, stories, and all the verbal arts follow, in a spiral of oblivion. Most of today’s languages are spoken by Indigenous Peoples, and so are most of the imperiled ones. They are oral, without written grammars or dictionaries. Knowledge is passed on from person to person. Quicker than amphibians, mammals, or birds, idioms across the world are vanishing.

Most of today’s languages are spoken by Indigenous Peoples, and so are most of the imperiled ones.

For native communities, language and land are intertwined. The Xingu, in the Brazilian state of Pará, is home to many of Brazil’s First Peoples: the Xipaya, the Kuruaya, the Kayapó, the Xikrin, the Parakanã, the Asuriní, the Arara, the Juruna . . . The linguistic variety is greater than the one found in Europe. It’s a tropical Babel.

Indigenous lands in the Xingu, however, have long been invaded. The original populations have lost their territories, and cultures have been decimated. The Kuruaya language is rapidly disappearing with the last generation of fluent speakers and is in danger of becoming extinct. Odete (Iawa) Kuruaya, one of the last speakers, is now on the verge of becoming a terminal statistic. It is worth asking: what might be lost if Kuruaya disappears? 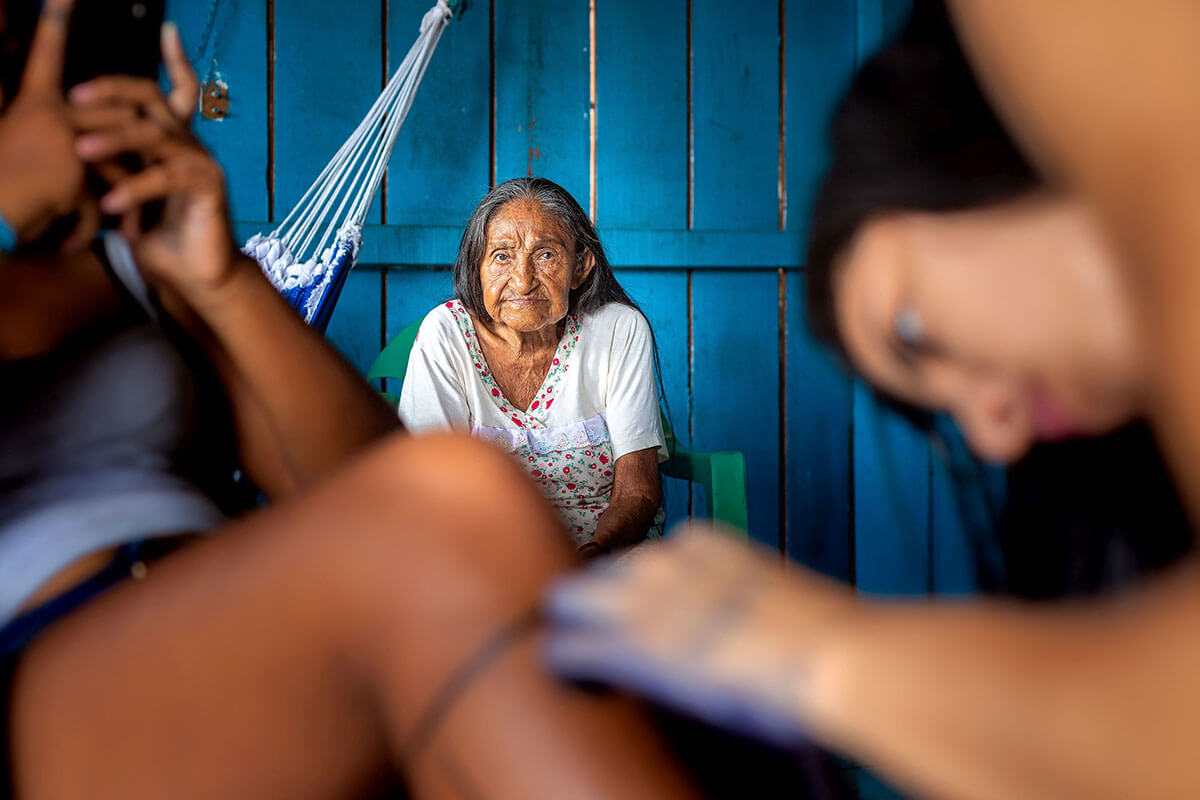 Iawa is in her eighties, maybe her nineties—no one really knows for sure, as the Kuruaya did not register or celebrate the birth of individuals. Photo: Miguel Pinheiro, 2019

As a child, Iawa danced in the river and built small playhouses made of sticks and stones and straw in a place they called Kurupité. Her family took shelter in that place and lived off the land. They planted corn, watermelon, pumpkin, cassava to make flour, cotton to make hammocks. At times they gathered around the fire and chanted in tune under the Amazon’s starry nights. 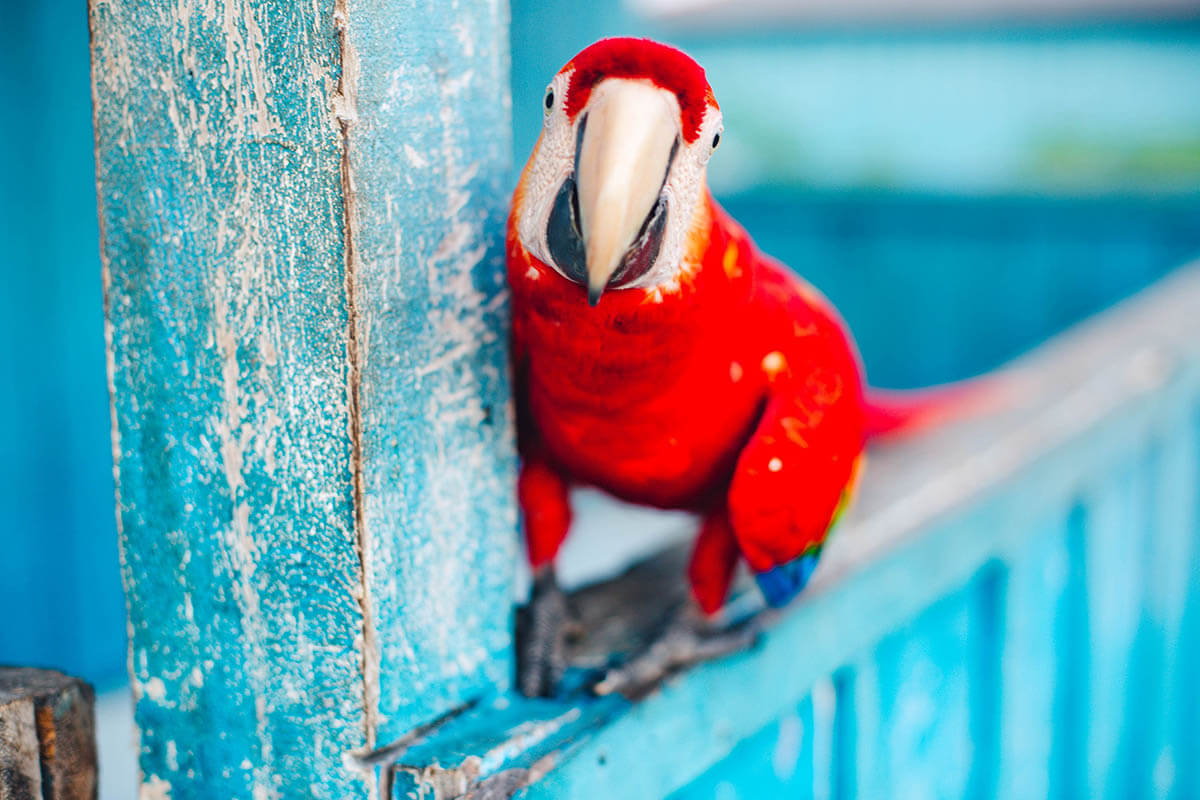 The Amazon, the world’s largest tropical rainforest, is home to an extraordinary variety and beauty of living creatures. The quest for “progress” and material goods has caused the destruction of many habitats and the extinction of countless species. Biological, cultural, and spiritual diversity ought to be key tenets for local and international policy. Photo: Miguel Pinheiro, 2019

As a teenager, maybe thirteen years old or so, Iawa married a migrant who was escaping the drought from northeastern Brazil, and right after that she was forced to work for non-Indigenous people, collecting forest chestnuts, hunting wildcats for fur, and extracting much sought-after rubber. That was the time when Henry Ford built Fordlandia, an extravagant project that plunked a factory city in the middle of the Brazilian jungle to provide rubber for Ford automobiles.

In the 1970s, Iawa finally secured a piece of land from her ancestors, where she lives with her family today, at the Great Bend of the Xingu, a stretch of one hundred kilometers of land where the river dramatically twists in a serpentine before embracing the great Amazon River. That’s next door to where the world’s third-largest dam, Belo Monte, has landed. The dam now controls the volume and quality of the water Iawa and her family get. That’s also close to where a Canadian mining company, Belo Sun, may well soon operate the largest open-pit gold mine in Latin America, bringing along its ore tailings, its chemical poisons, and the guarantee of a ravaged landscape. 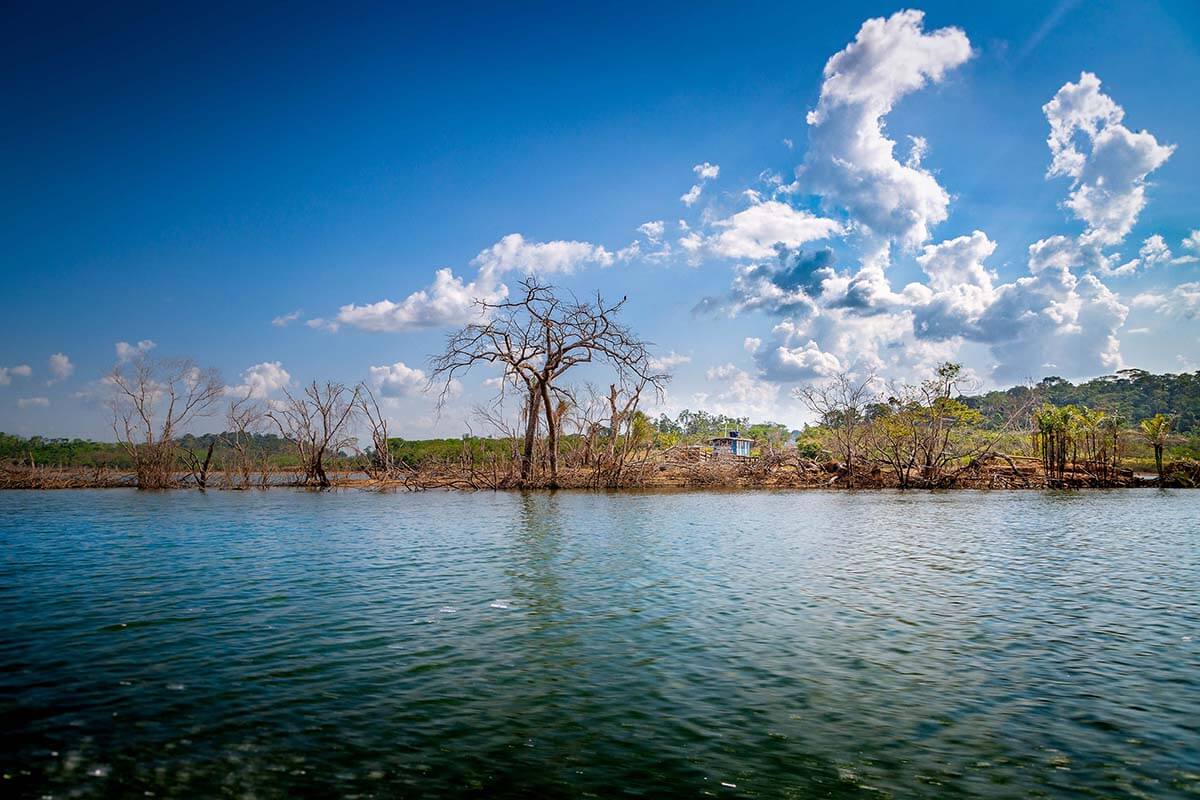 The Belo Monte dam is responsible for unpredictable fluctuations in the volume of water in the Xingu River. This variability has disrupted the local flora and fauna, with serious consequences for several hundred families of Indigenous people and traditional communities. Photo: Miguel Pinheiro, 2019

Around the city of Altamira, contact between urban dwellers and Indigenous Peoples has intensified over time—always in the name of economic advance, a callous and controversial “progress.” The Kuruaya have now been cornered by history, and Iawa is a living portrait of a beautiful way of life on the land that is being pushed to the edge of oblivion.

The Kuruaya have now been cornered by history, and Iawa is a living portrait of a beautiful way of life on the land that is being pushed to the edge of oblivion.

What we all defend as “human rights” may look like something else to Indigenous Peoples. As Brazilian Indigenous leader Ailton Krenak boldly puts it: “I came to the conclusion that humanity [in the so-called ‘civilized’ world] is just a club that advertises a lot about itself and convinces everyone that they are all about equality. While they are a successful club, the rest of us may as well die.” 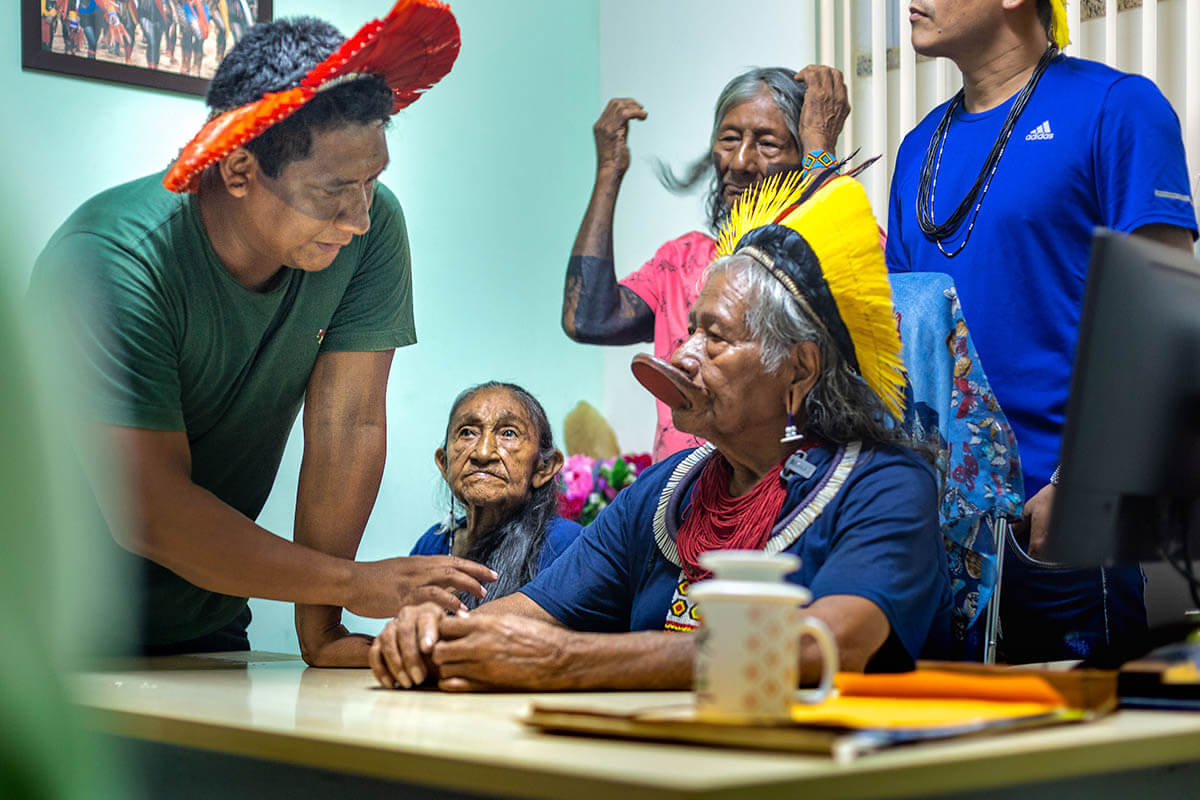 Iawa, from the Kuruaya people, talks to Raoni, a Kayapó leader and Nobel Peace Prize candidate. Urbanization around the city of Altamira, in Pará State, Brazil, has created new challenges. Indigenous Peoples have forged new alliances to defend their lands and cultures. Photo: Miguel Pinheiro, 2019

The Kuruaya were able to withstand the missionaries, then the industrial juggernaut, and are still resilient as the dam chokes their river and the mining company knocks at the door with its golden apocalypse. They resist, but it is getting harder and harder to keep their culture. The same venomous snake that poisoned Iawa’s childhood is now swallowing her land. 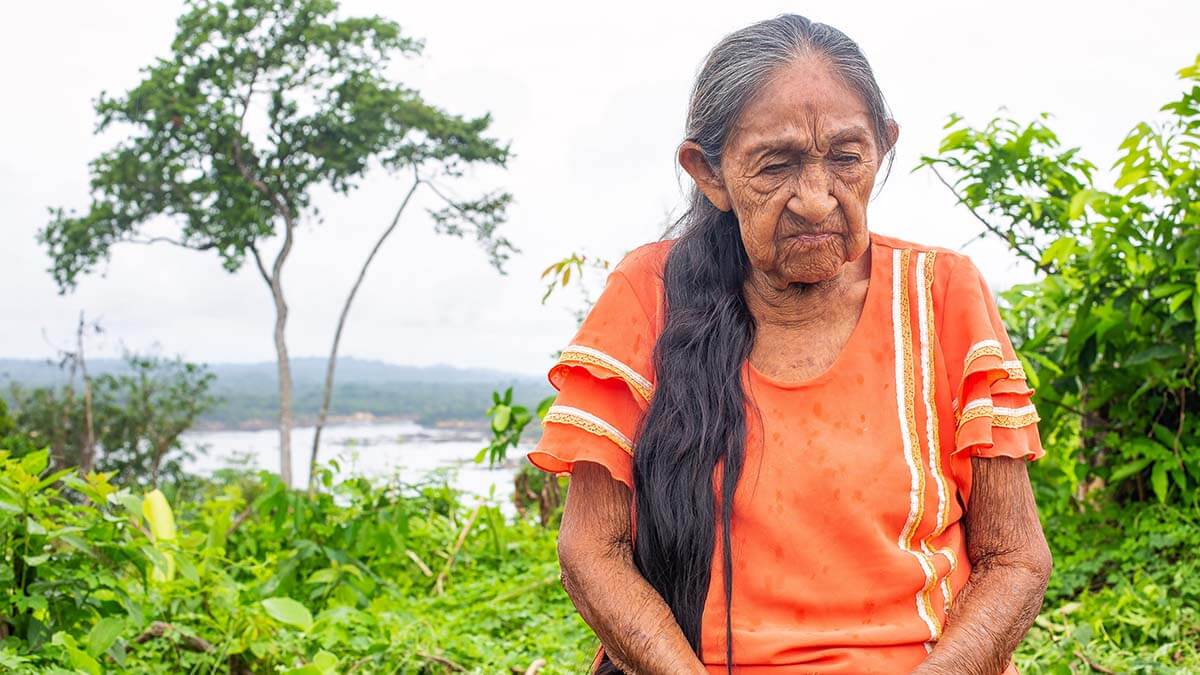 The Xingu River is sacred to the Kuruaya. It used to provide them with clean water, abundant fish and game, a healthy forest, and a freeway on which to travel and trade their goods. Since the arrival of the dam, water scarcity has caused serious hardship for them. Photo: Miguel Pinheiro, 2019

Iawa is now in her eighties, maybe her nineties—no one really knows for sure, as the Kuruaya did not register or celebrate the birth of individuals; rather, they performed rituals that involved the entire group. A few years ago, the local Brazilian authorities created an ID document for Iawa. She was assigned a date of birth. To this day, she has never celebrated her arbitrary birthday. And it doesn’t matter all that much. Nature has always been and always will be.

The Kuruaya were able to withstand the missionaries, then the industrial juggernaut, and are still resilient as the dam chokes their river and the mining company knocks at the door with its golden apocalypse. They resist, but it is getting harder and harder to keep their culture. 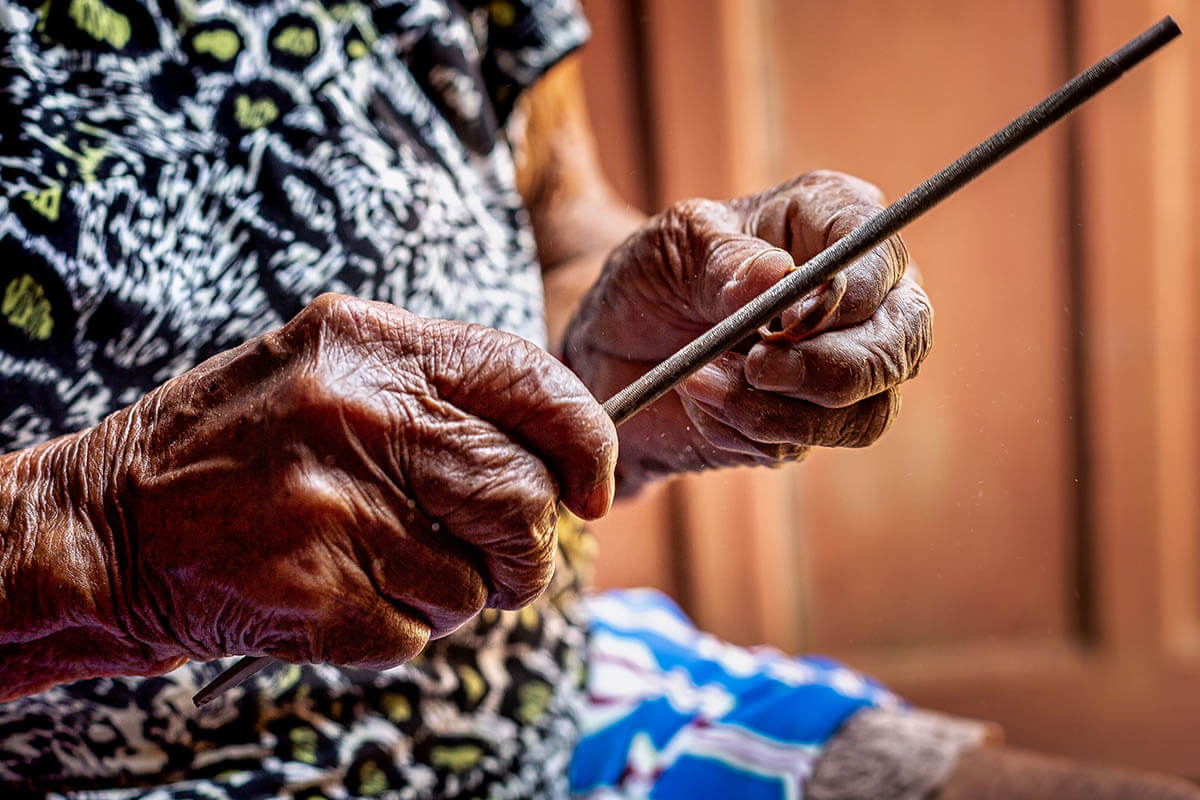 Iawa crafts a ring out of wood from a local tree. In the early morning, she gathers fruits and seeds from the forest to make rings and necklaces. Such unique Indigenous handicrafts are widely appreciated. The Kuruaya sell them at events or in traditional street markets. Photo: Miguel Pinheiro, 2019

Iawa built a family, found land, and prospered. The last time we spoke she was all excited about the new cocoa crop they had just planted. At an old age she’s revered as an Elder, consulted on the best time to harvest a crop or on what local herbs are useful for medicine and ritual. At meals, she is the first to be served. During the day, she collects seeds and dried fruits from the forest, from which she crafts rings and necklaces. It’s a harder task now, as trees are dying of thirst and some seeds and fruits are scarce. When Iawa’s grandchildren come to her house, they sing together. Iawa loves those old Kuruaya songs. They remind her of a time before “civilization” arrived. 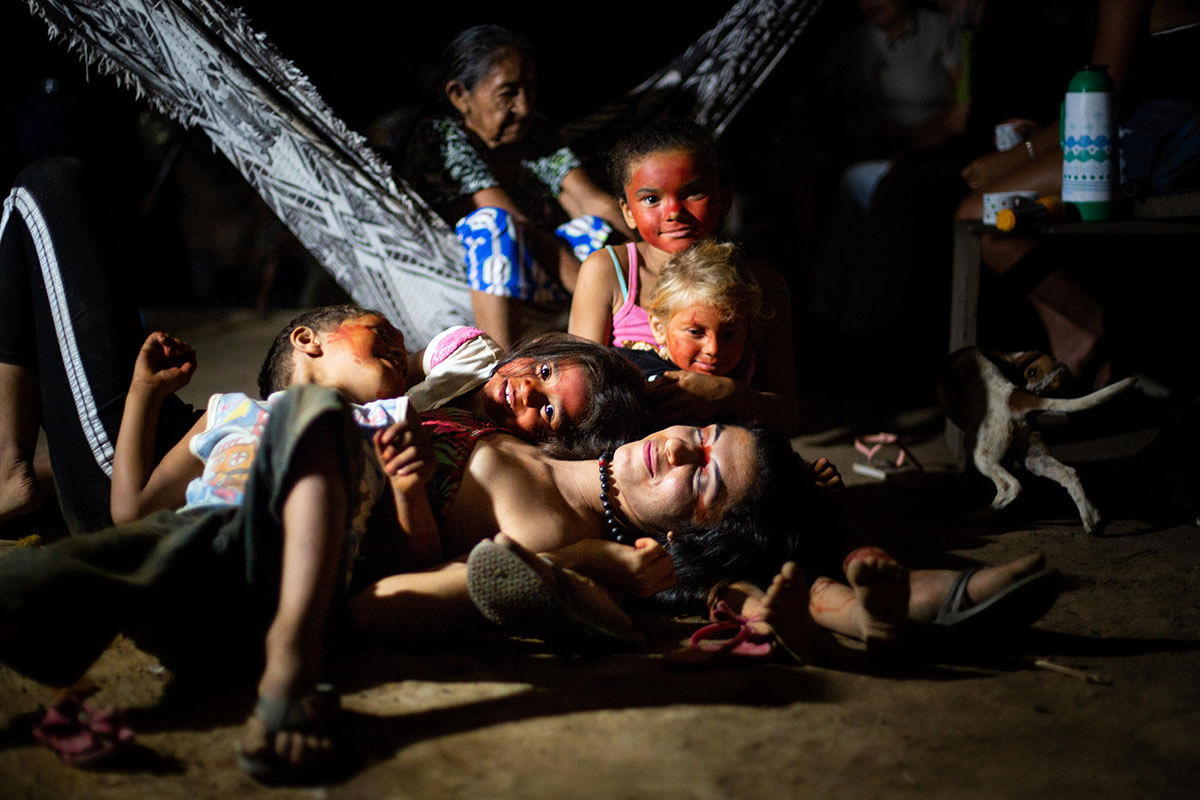 Some of Iawa’s grandchildren. The Kuruaya extract a natural red pigment from the local urucu fruit, with which they paint their faces. Each Indigenous nation has its own traditional designs and symbols, which have both an aesthetic and a symbolic meaning, and which are learned from an early age. Photo: Miguel Pinheiro, 2019

In the larger society in Brazil, the prevailing opinion is that Indigenous people are “lazy” and “unproductive”—to which Davi Kopenawa, the great Yanomami leader, dryly objects: “The lands of Indigenous Peoples need not ‘produce,’ as everything has already been produced a long time ago. The game, the fish, the trees, it’s all there for us to use. There’s even medicine that we can find.”

As I write this, I am working on a new film, Terra Preta? (“Black Earth?”), named after a strikingly dark manmade soil (a mixture of soil, charred wood, clay fragments, and other natural materials) that is abundant in some parts of the Amazon rainforest. That soil has been used by Amazonian First Peoples for centuries. It makes the land exponentially more fertile, and to this day, “modern” technology hasn’t been able to match it.

Just like the tunes from the Kuruaya’s ancient lore. 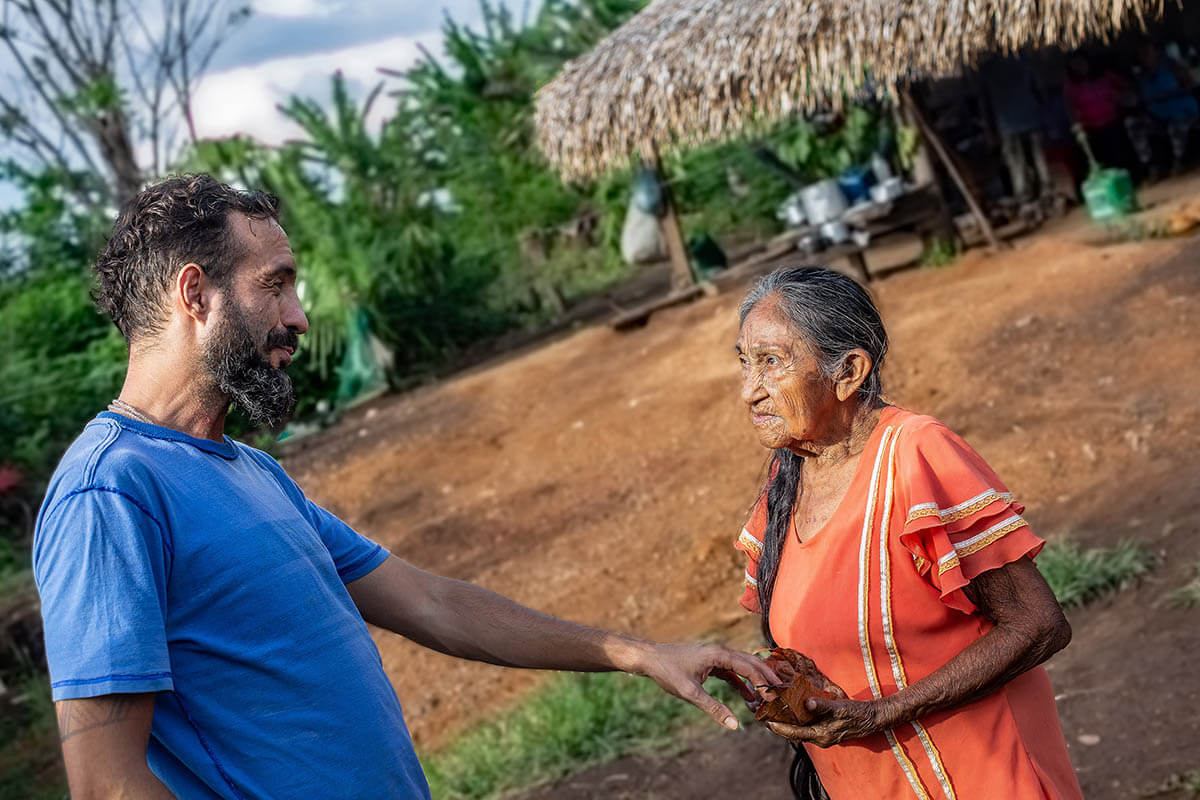 After spending time with the Kuruaya, Miguel Pinheiro says goodbye to Iawa, promising her that many more people will get to see her story and listen to the unique Kuruaya language. Photo: Miguel Pinheiro, 2019 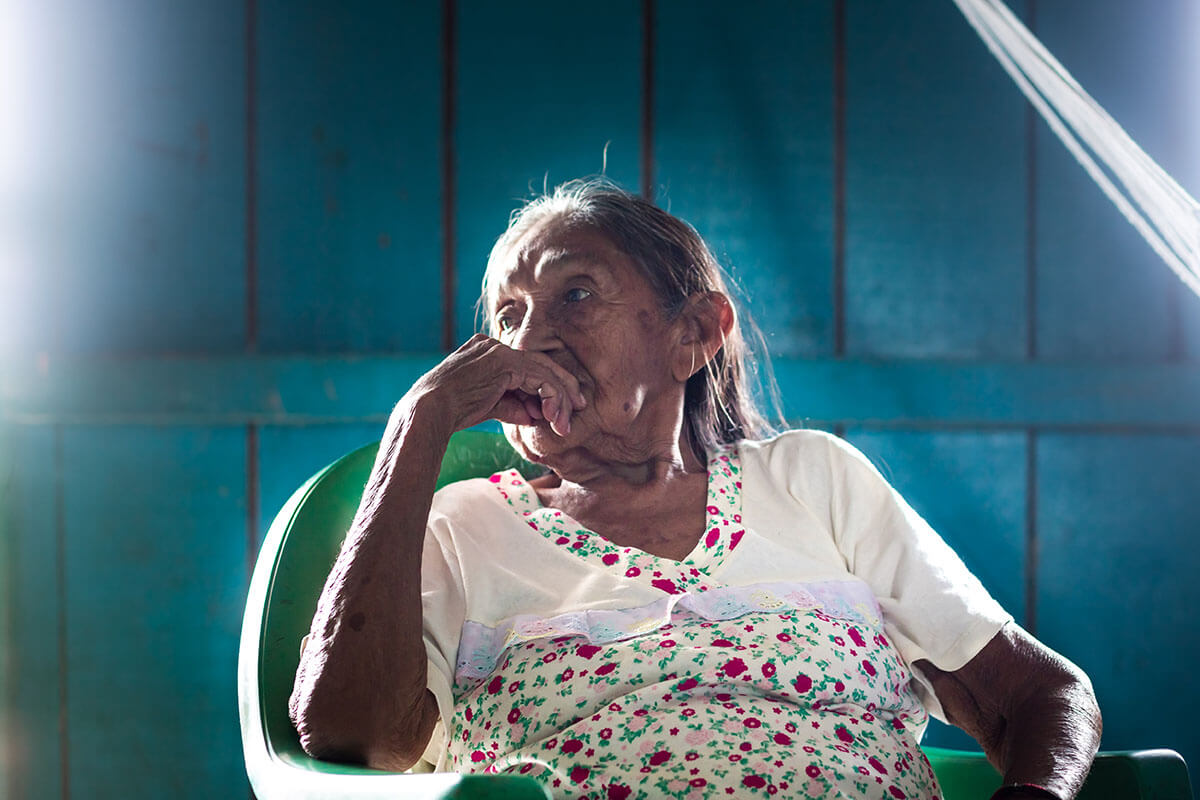 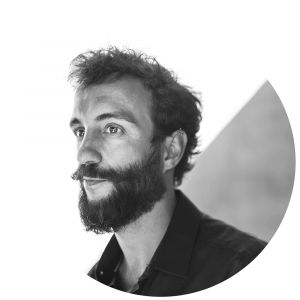 Miguel Pinheiro is an award-winning Portuguese storyteller. With degrees in Neuroscience from Portugal and Theater/Communication from the United Kingdom, he focuses his storytelling on traditional communities. His stories were published in Europe, Africa, and Brazil. He collaborated with the Chinese artist Ai Weiwei on a film project in the Amazon, and is working on a feature documentary called Terra Preta?