Ita: A Special Food for a Special Time in an Indonesian Community

by Lina A. Karolin 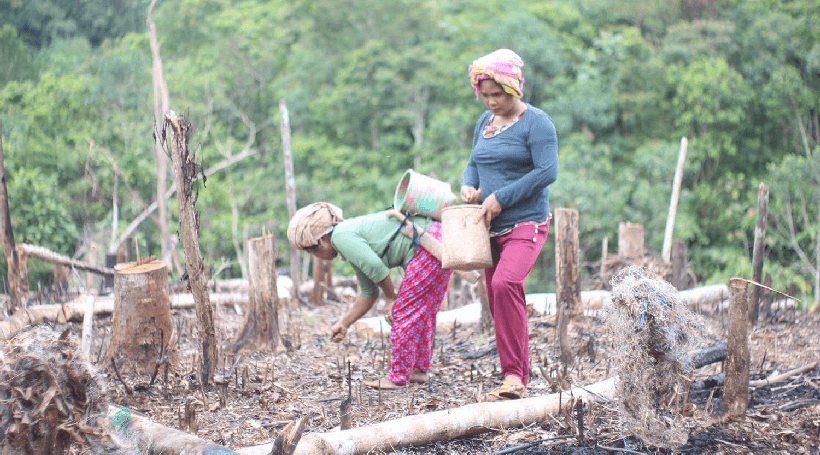 Farmers planting rice. When it was time for the first harvest of the season, families would gather to celebrate. Photo: Pinarsita Juliana, 2017

I carefully cut the rice stalks in front of me. “Make sure you do not leave any stalk behind,” said Grandma Kader, my great-grandmother. “If you leave a sprig, the rice will cry and won’t come back again, which is why the next harvest will not be good,” she said with a serious face. I tried my best to pick all the rice. It was hard work to harvest the rice with the sun above your head and the stumps and rice leaves that would scratch your skin. But at the end of the day, there would always come a happy time, whereby all the family will gather and have supper together from the harvest: bojah bohua (“new rice” — that which comes from the first harvest). It will be cooked with pandan leaves, eaten with fish from the river and vegetables from the field. The elders will tell the story of the harvest or other folk stories from the ancestors, and the children will gather around to listen.

Harvest time was the most enjoyable time of the year. If the harvest was good, then it would be a time of abundance. If the harvest was not as good as expected, there was still something to celebrate: at least we could keep seed for the next planting, and we could still enjoy the food we were able to harvest, bojah bohua and ita. Ita, made of young, glutinous rice, can be eaten mixed with sugar, grated coconut, pork oil, or other foods. Ita is available only once a year, making it very special and valuable. It is thought that each family member should eat it to avoid peril or distress.

Our family gathered in the field to harvest all the rice, and often we worked together with other villagers to do it, taking turns to harvest by going from one field to another.

Our family gathered in the field to harvest all the rice, and often we worked together with other villagers to do it, taking turns to harvest by going from one field to another. That was helpful because the work would be done faster by doing it together. 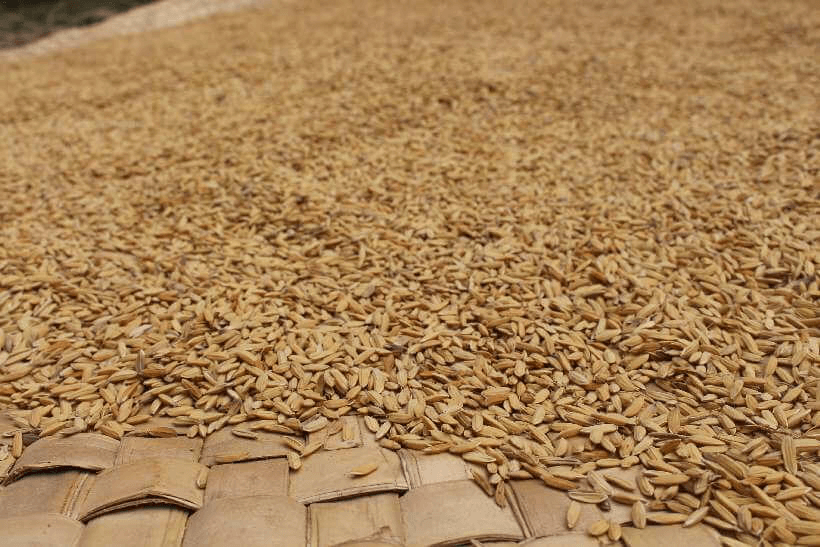 The rice is dried before being ground. Photo: Ranu Welum Media, 2017

At night we gathered in the hut yard in the fields, lit a torch, and then began to work processing the harvest and talk about the harvest season. It was here that we made ita. The young, green, glutinous rice would be roasted on a big griddle, then pounded using a mortar made of ironwood. Many people helped do it, taking turns to finish while talking late into the night and drinking hot coffee. It was a time when togetherness felt so strong, with all the people helping to accomplish the work. 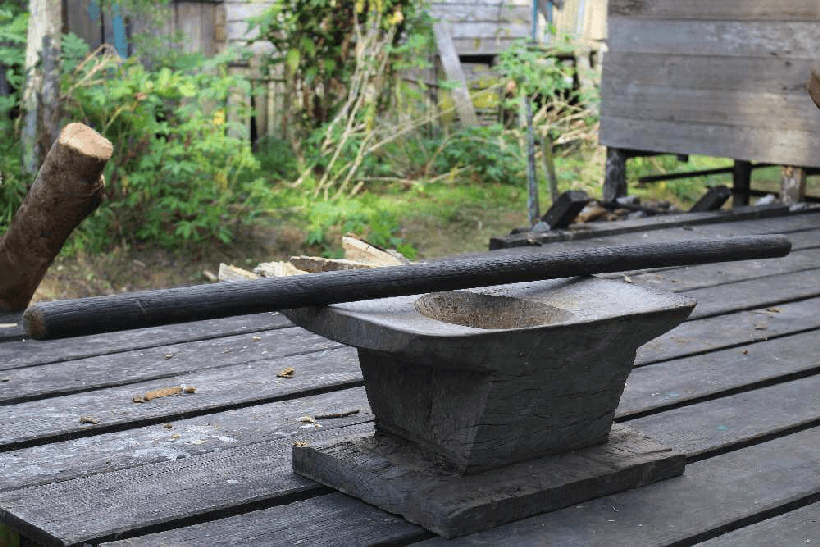 The rice was ground with an ironwood mortar and pestle. Photo: Ranu Welum Media, 2017

This story is only one piece of memory from my childhood about fifteen years ago. Today, it is only that — a sweet memory. Since I moved to Palangka Raya, the capital of Central Kalimantan (Central Borneo, Indonesia), I have almost never set foot in the fields again, especially during the harvest season, and did not eat ita again for a long time. The distance from the city to my village, Tumbang Habangoi, is about seven hours by car. That, and the fact that my parents no longer live in the village, have made it hard for me to go back. For many reasons, sometimes I feel like I am no longer part of the tradition that I used to be involved with in the past. Although I now feel like I am separated from my roots and land, this memory of harvesting rice and making ita will always be a treasure for me. 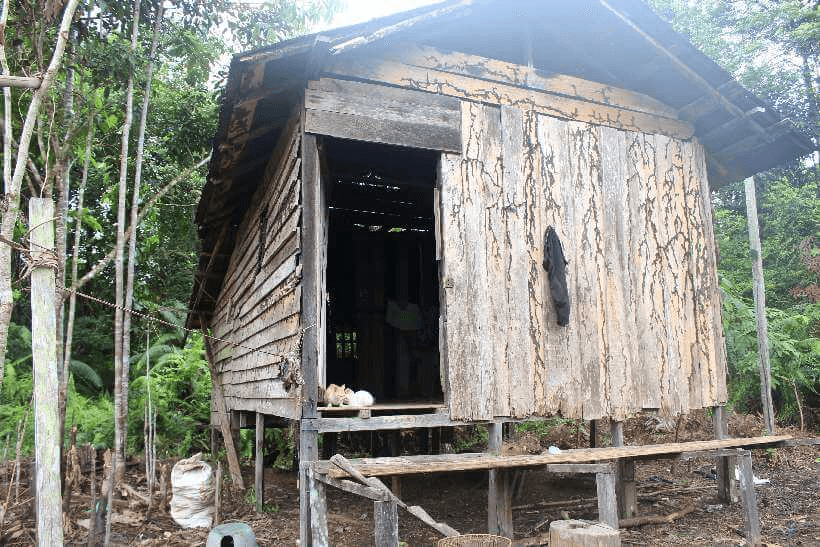 Ita was not just food: it was a symbol of the traditions commonly practiced by the Ot Danum community — an opportunity to gather and share with friends, family, and neighborhood. It is not only distance that has made me and many other young Ot Danum people who have moved to the city no longer able to enjoy the atmosphere of the harvest season or eat ita with our families. Another reason is that many people are no longer farming like before. The focus of the community is no longer just farming, but on how to survive in a modern economy, earn money, and send their children to schools that are far from the village. It is hard to continue living lives in traditional ways with so many changes occurring. Ita is no longer considered a food that must be eaten by all family members, as in the past — so much so that, for those of us who live in a distant place, families in the village would send it. Now that is no longer the case.

Ita was not just food: it was a symbol of the traditions commonly practiced by the Ot Danum community. 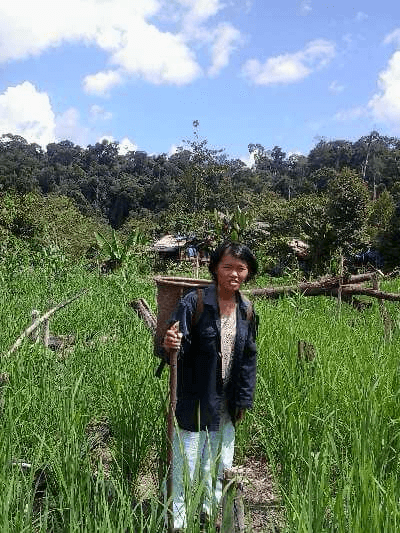 Government policies also affect our traditions and separated me and my fellow generation from our roots. The Ot Danum community was accustomed to using shifting cultivation in which new fields were cleared and fertilized by burning because the soil is not very fertile. This practice not only met the daily needs of our community, but it also became our tradition.

Due to frequent land fires and haze in Kalimantan, however, the government has issued a policy that no one can burn land, including to create shifting fields for cultivation, with serious penalties for violations. With no other solution in sight to tackle the problem, there is no rice cultivation. No cultivation means no harvest, and no ita or any of the traditions associated with it.

For so many reasons, I feel I have lost the life that I used to know and live. I worry that we will not only lose the harvest and never eat ita again, but also lose our identity, our history, and our roots.

Lina Anastasia Karolin is an Indigenous youth from the Ot Danum tribe in Central Kalimantan (Borneo) Indonesia. She now works as an elementary school teacher in Palangka Raya, the capital of Central Kalimantan. Read more from Lina Karolin.

Miranda, R. J. (206). The Indigenous Dayaks and forest-dependent communities are not to blame for the raging forest fires in Central Kalimantan, Indonesia!Retrieved from https://medium.com/@randijulian/the-indigenous-dayaks-and-forest-dependent-communities-are-not-to-blame-for-the-raging-forest-fires-e96d505aeac4