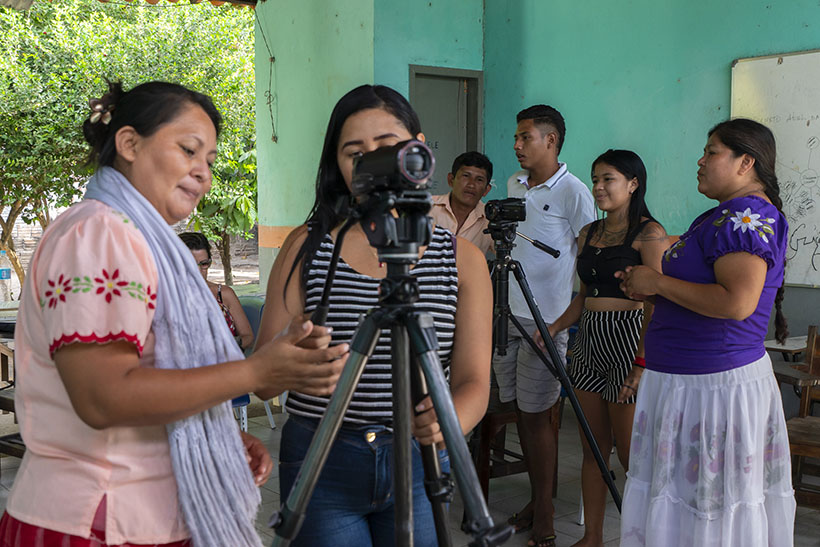 La Marabunta Filmadora’s Eusebia (front left) and Anabela (back right) traveled from Mexico to Brazil to offer a participatory video training workshop to youth in a Guajajara community. Here, they are facilitating a game that allows trainees to learn how to use a tripod through hands-on experiential training. Photo: Thor Morales, 2019

In Mexico, biocultural diversity is perpetuated and nurtured mainly by women. Indigenous women take care of the culture and the land: they teach the mother tongues; cook traditional foods; cure with local herbs and ancestral knowledge; retain the traditional attire; and more strictly follow the usos y costumbres (customs and habits), the traditional ways of life. Immigration, cultural erosion, patriarchy, violence, and other chronic issues expose men to more chances for change. It is uncommon for Indigenous women to travel and work outside their homes and local communities, let alone go abroad. Such opportunities are almost always reserved for males. Nonetheless, many women have to fulfill the cultural roles assigned to them, while at the same time economically supporting both their nuclear and their extended families. As I see it, the most radical Indigenous persons to counter the loss of biocultural diversity ought to be women.

I have had the honor and pleasure to work for about a decade with a group of such “biocultural diversity defenders”: a handful of Yaqui women from northwestern Mexico who are using participatory video to express their commitment to biocultural conservation. Within the context of an alliance between the Yaqui tribe and InsightShare, a leading participatory media organization, an initiative that I helped seed and nurture blossomed into La Marabunta Filmadora, an Indigenous movement that uses video to defend territories, languages, dignities, and the natural world.

Biocultural diversity is perpetuated and nurtured mainly by women. Indigenous women take care of the culture and the land: they teach the mother tongues; cook traditional foods; cure with local herbs and ancestral knowledge; retain the traditional attire; and more strictly follow the usos y costumbres (customs and habits), the traditional ways of life.

Breaking with tradition, two Yaqui women activists and members of La Marabunta Filmadora, Eusebia Flores and Anabela Carlon Flores, embarked on an odyssey to share participatory video with other Indigenous Peoples, creating an intercultural dialogue in defense of biocultural diversity through the use of media. In 2019, they traveled to Brazil to share the magic of using video to keep ancient traditions and ways of life alive and well. They visited the Guajajara people in Northeastern Brazil, an encounter that deeply marked their lives as Indigenous persons and as women.

“The nervousness of meeting a different community and the fear of not perfectly understanding their language didn’t stop me from connecting with their ideology, their way of thinking as Indigenous people. This gave me the confidence to carry out the training activities.”

In Brazil, the two Marabunta women facilitated a participatory video training with ten Indigenous youngsters from the Guajajara village of Zutiwa in the Arariboia Indigenous Territory. This partnership was made possible by InsightShare, Mari Corrêa from Instituto Catitu (a Brazilian Indigenous media training and production center), and the Indigenous media collective Mídia India. During the training, Eusebia and Anabela witnessed the most iconic festival of the Guajajara: a festa da Menina-Moça (the rite of passage from girl to young woman). The trainees in the participatory video workshop filmed the event. The photos and video I present here are a testimony to Eusebia’s and Anabela’s experience during this groundbreaking journey.

The most radical Indigenous persons to counter the loss of biocultural diversity ought to be women.

But what price does a biocultural conservationist or advocate have to pay? In Mexico, if he’s a man, more likely than not the price is small to nil; on the contrary, he will probably be applauded and seen as an example, a respected person. If she’s a woman, the story is very different: from seeing doubt cast upon her widely proven capacity to do the job to enduring harsh social criticism from partners, family, and the larger community, women must overcome social barriers that men can hardly imagine.

Despite the challenges and the systemic violence that conspire to hold them, and other women, down, Eusebia and Anabela decided to take the trip and found that they could feel at home even in a faraway and strange land. They recognized something they had experienced with other Indigenous Peoples in Northern Mexico: the Indigenousness in the Guajajara people. They regained self-confidence and soon felt part of the community.

“I really enjoyed living with the Guajajara. I feel that I identify with each of them, because they also have a way of involving you and making you feel part of them. The simplicity, kindness, and hospitality offered to us was very emotional and warm.”

What drives their goal of connecting native peoples is a very simple idea: if participatory video can help others to restore or revive their biocultural diversity, they have to share it. Women like Eusebia and Anabela have a strong commitment to their people, culture, and land. Yet they also like change and freedom. Their agile minds and powerful hearts run faster than most. Being Indigenous women in a country like Mexico, they have faced challenges since the day they were born, but they have overcome them. Participatory video has opened unexpected doors, becoming a tool for them to use their power and exercise freedom, all the while fighting for dignity, territory, and respect, both for their people and for themselves.

“Part of La Marabunta’s mission is to use media to keep our land safe and our cultures thriving. So when I heard participants say that they were not only learning skills to film but also learning about their own culture, those words delighted me and assured me that, despite all challenges, participatory video is a powerful way to counter biocultural loss.” 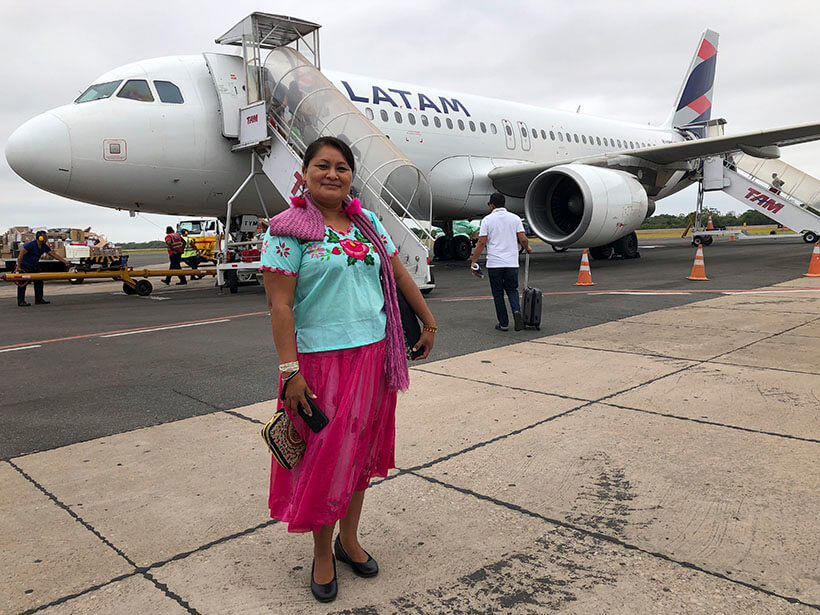 Eusebia after landing in Imperatriz, Brazil, our last stop before hitting the road to the Arariboia Indigenous territory. She wanted a picture with the plane as a souvenir. Photo: Thor Morales, 2019 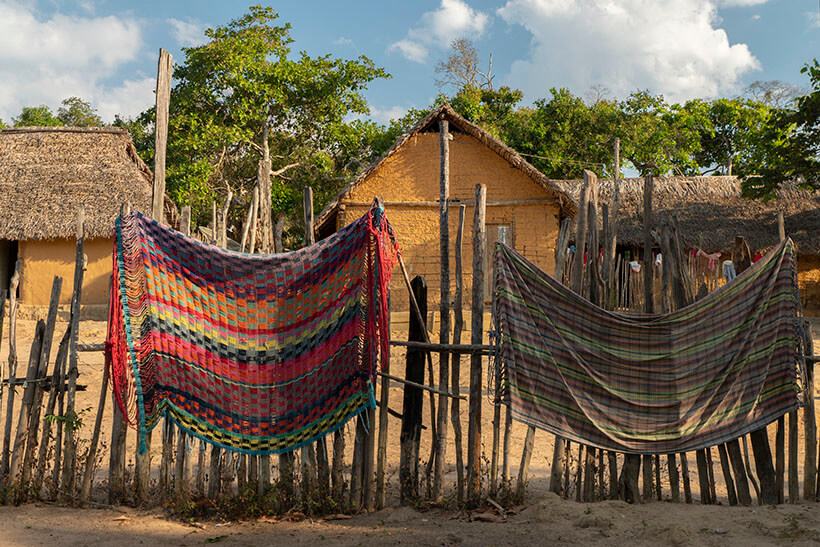 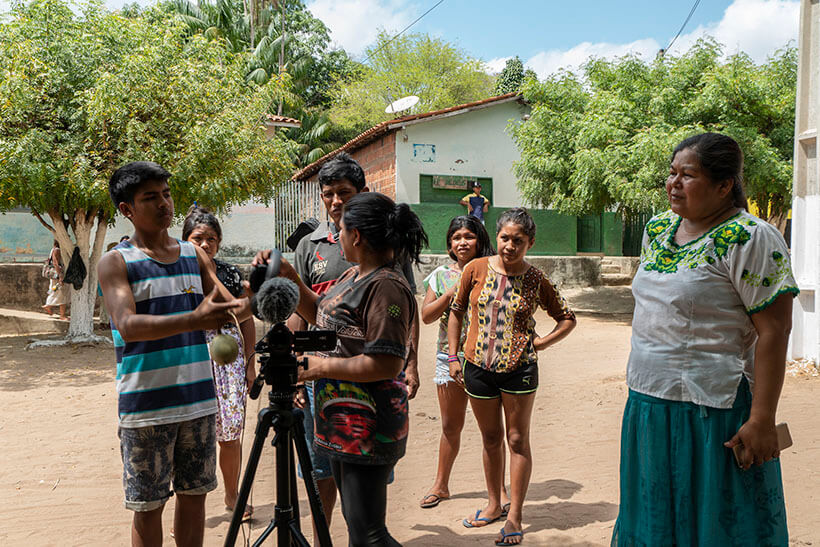 Anabela (right) coaches one of the Guajajara teams while they practice filming and sound recording. Photo: Thor Morales, 2019 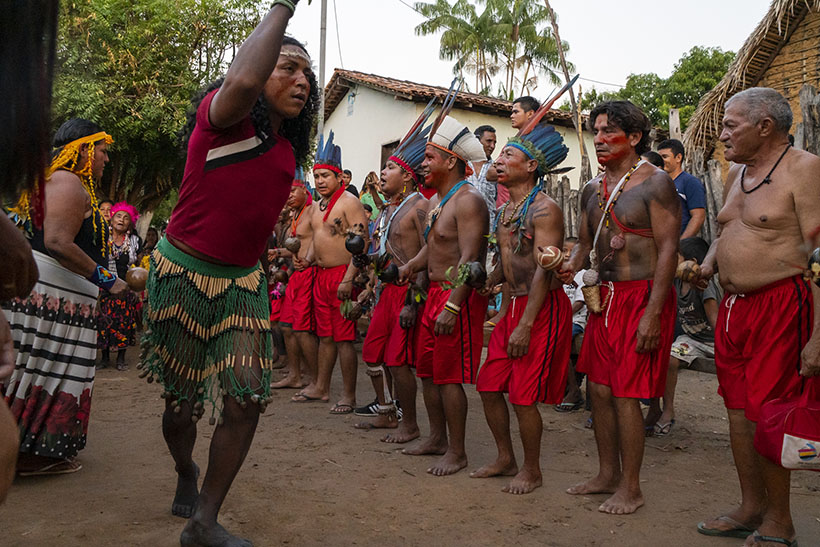 Filming the singers and dancers during the Menina-Moça festival was the highlight of the workshop. Photo: Thor Morales, 2019 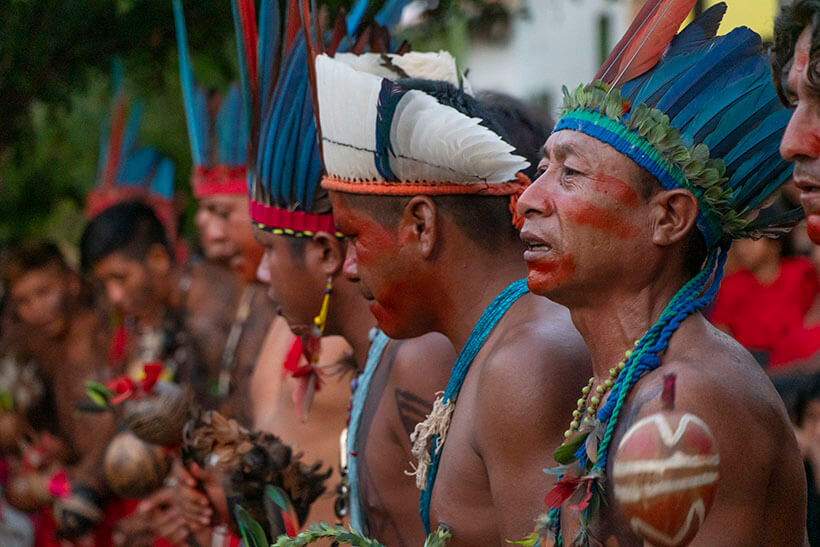 Traditional singers are the soul of the festival. They must keep chanting throughout the whole ceremony. Photo: Thor Morales, 2019 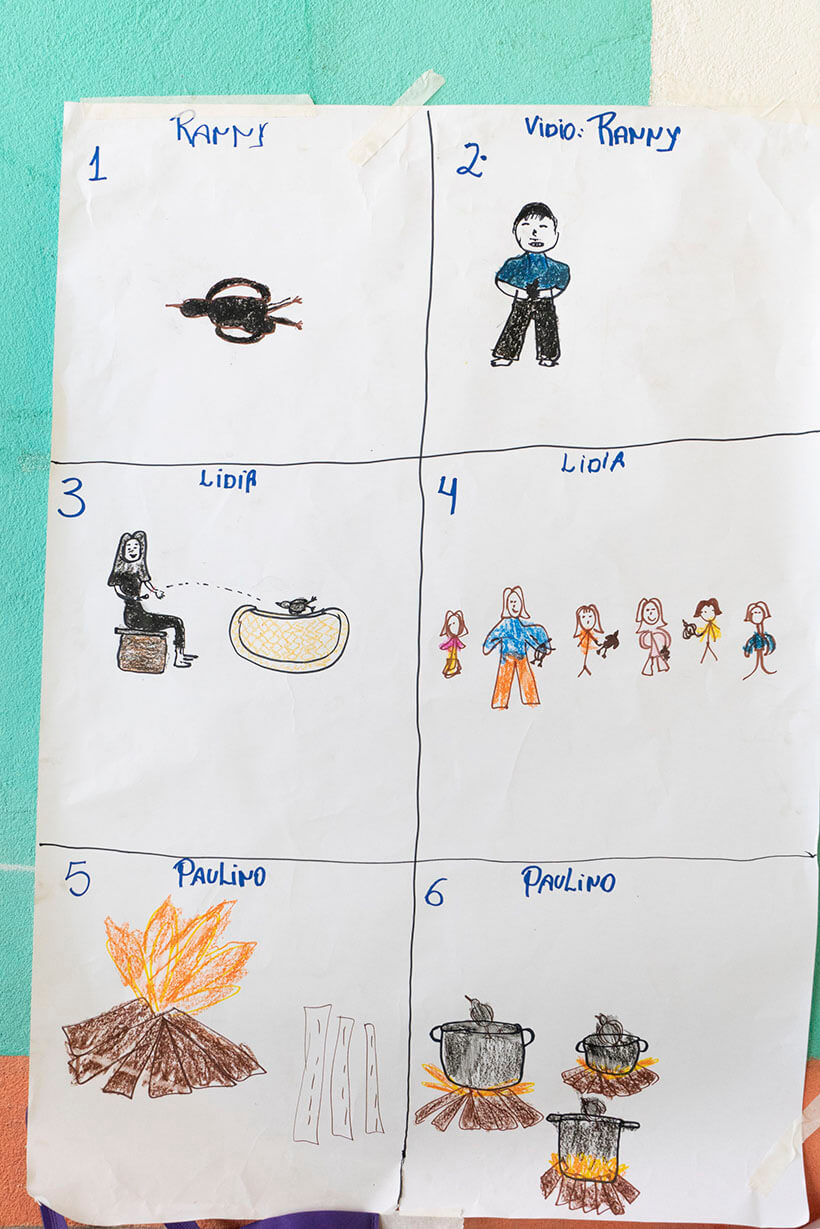 A storyboard depicting the sequence of clips needed to capture one of the key elements of the Menina-Moça ceremony: the Tona bird. Photo: Thor Morales, 2019 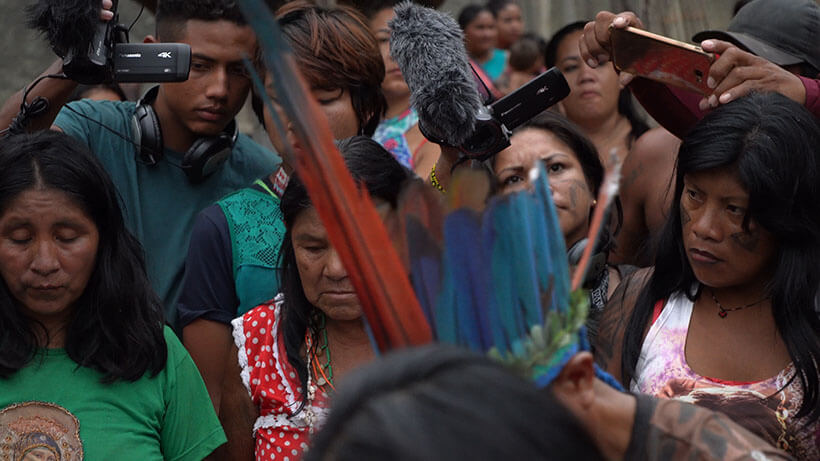 Junior and Ediana Guajajara, two of the trainees, film the last part of the Menina-Moça celebration. After ten hours of filming, they could still hold the camera up! Photo: Thor Morales, 2019 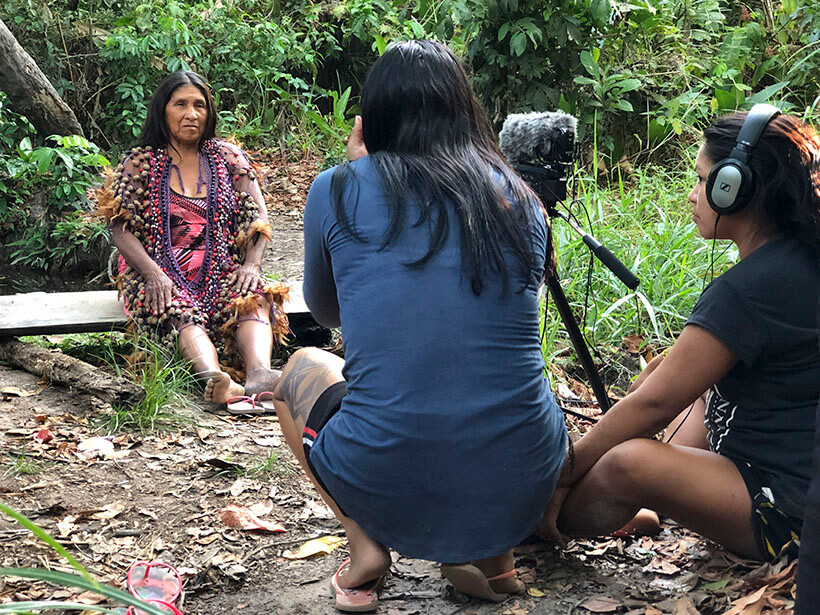 Lidia and Ediana Guajajara interview one of the elderly women who led the celebration. Despite having sung and danced nonstop for 18 hours, the Elder still found the strength to share her knowledge on camera. Photo: Thor Morales, 2019 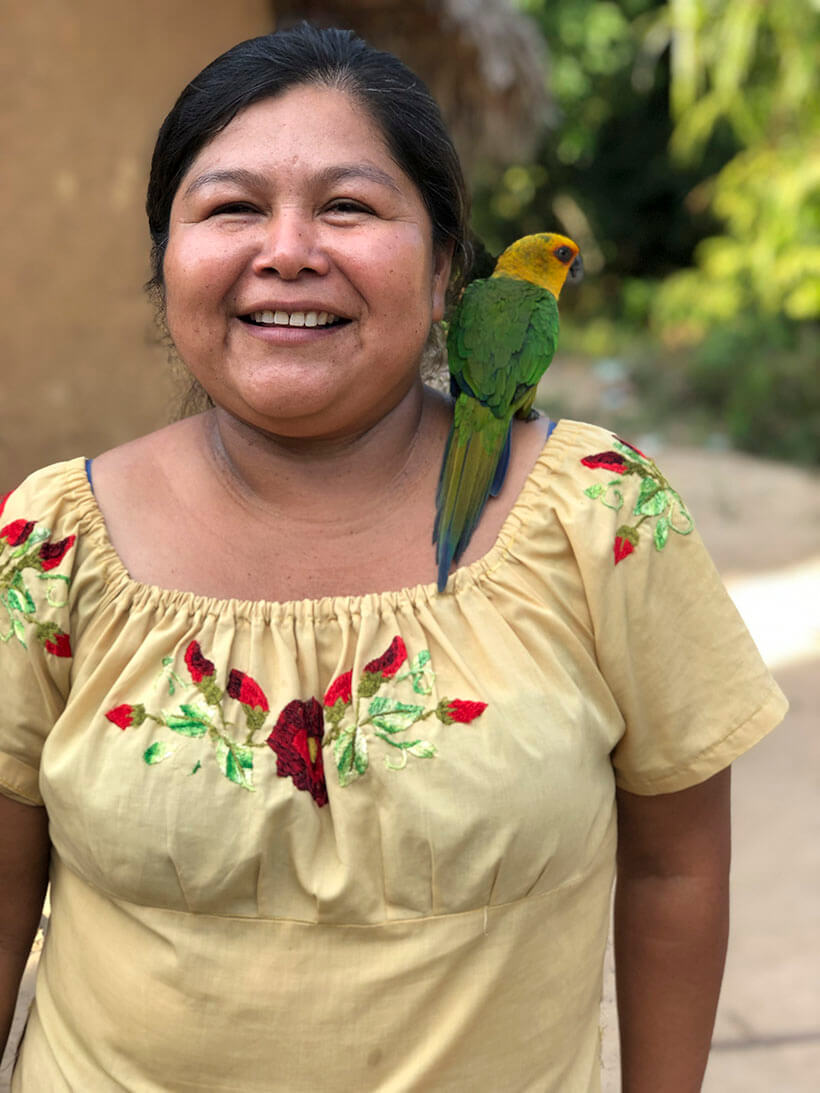 Anabela poses with a pet parakeet on her shoulder. Part of the joy that participatory video brings to her comes from the opportunity to know new cultures. Photo: Thor Morales, 2019 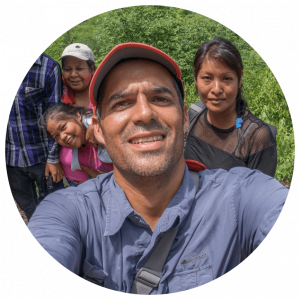 Thor Morales is a self-taught storyteller who has collaborated with Yaqui and Seri peoples of Mexico for over a decade. He is Senior Associate at InsightShare and has worked with participatory video since 2010, delivering training to Indigenous Peoples, activists, researchers, and artists in Mexico, Canada, Liberia, Argentina, Brazil, Colombia, and Kenya.