Linking Language and the Land | How Words, Stories, and Ceremonies Can Inform Discussion around Decision Making for the Kwakwa̱ka̱’wakw Peoples and Ceremonies

Kwak̓wala is the Indigenous language of the Kwakwa̱ka̱’wakw on the mid-coast of present-day British Columbia. It expresses a connection to the land through words, stories, and ceremonies, which describe the patterns of the seasons, traditional use, important places, and cultural and spiritual values.

When I was young, I remember walking in the woods with my mum and her teaching me which berries to pick and which ones not to pick —  and she remembered the Kwak̓wala names! This was unique because she forgot, or decided to forget, her first language at residential school, St. Michael’s in Alert Bay. Yet, while berry picking, she would exclaim, “ʦa̱ǥa̱ł!” (thimbleberry, Rubus parviflorus) and other plants names, too. These were happy times walking in the woods because I shared my mum’s excitement of her remembered Kwakwa̱ka̱’wakw ecological knowledge and Kwak̓wala. My interest in linking language and the land was rekindled when reading The Living World: Plants and Animals of the Kwakwa̱ka̱’wakw, published in the late 1990s by the U’mista Cultural Society, a Kwakwa̱ka̱’wakw-led organization in Alert Bay. I was an undergraduate student at the University of British Columbia’s Faculty of Forestry, learning the plants and trees in English and Latin. Reading The Living World, I saw trees, plants, seaweeds, and animals of importance to the Kwakwa̱ka̱’wakw, but could not read the Kwak̓wala orthography.

A way to decolonize my own knowledge about the forests was to begin to learn Kwak̓wala. Two years ago, as a part of my graduate studies, I completed a plant dictionary in Kwak̓wala to build upon the work completed by U’mista and The Living World book and to add to the First Voices online archive of First Nations languages. In collaboration with Kwakwa̱ka̱’wakw fluent speakers and U’mista Cultural Society, 300 additional words and phrases for plants in Kwak̓wala can now be found in the First Voices Kwak̓wala section.

In addition to audio and U’mista orthography, the plant words are complemented with a picture of the plant for identification purposes. The dictionary has audio files of over 5000 words and 1000 phrases so that people who cannot read the orthography can hear fluent speakers say the Kwak̓wala words. Now, almost 20 years after reading The Living World, I am taking a class with linguist Patricia Shaw and a fluent Kwak̓wala speaker from the First Nations and Endangered Languages Program at the University of British Columbia.

Our language expresses a connection to the land through words, stories, and ceremonies, which describe the patterns of the seasons, traditional use, important places, and cultural and spiritual values.

As a graduate student, my research interest is in understanding an Indigenous Peoples’ perspective on forests. This interest stems from my career as a forester, during which I have lived in Indigenous communities and heard their concerns for the lands and resources — concerns that stem from the impacts of industrial resource extraction on traditional ways of life, as well as from access issues, unsustainable harvest rates, and lack of local benefits. What often seems to be lacking is a cultural fit, as well as equity in decision making.

Realizing the interconnectedness between Kwak̓wala, Kwakwa̱ka̱’wakw, and nature, the next step in my research is to understand how words, stories, ceremonies, and cultural and spiritual values could inform discussions around local decision making.

Words’ Connection to the Environment

Literal translations from Kwak̓wala clearly demonstrate that the Kwakwa̱ka̱’wakw have a complex and intimate knowledge of land, ecology, and forests and of the interconnectedness between plants, animals, environment, people, and spirituality. Kwak̓wala describes “how the forest works” by explaining what a place or plant looks like and what places or plants can be used for. Looking deep into a word can also reveal something about the history of interaction and trading with neighboring Indigenous Peoples. To Kwakwa̱ka̱’wakw, plants and animals are more than things: they hold spirits, and some plants and places are considered supernatural and important spiritually for our ceremonies.

A small example of the wisdom that the Kwakwa̱ka̱’wakw hold in the Kwak̓wala language can be demonstrated by the word a’agala, a small, rare wintergreen plant. The English translation of a’agala is “it grows in the shade.” This and other literal translations of words taught me that the Kwakwa̱ka̱’wakw have an in-depth knowledge of the ecology and ecosystems around them.

What is most important to the Kwakwa̱ka̱’wakw is demonstrated by what has been given the most extensive vocabulary. In Kwak̓wala, not all plants have names, if they were not of use for food, medicine, ceremonies, or structures. The plant for which Kwak̓wala has the largest number of words is Western red cedar: at least forty-one words. The words describe every part of the tree and its multiple uses. 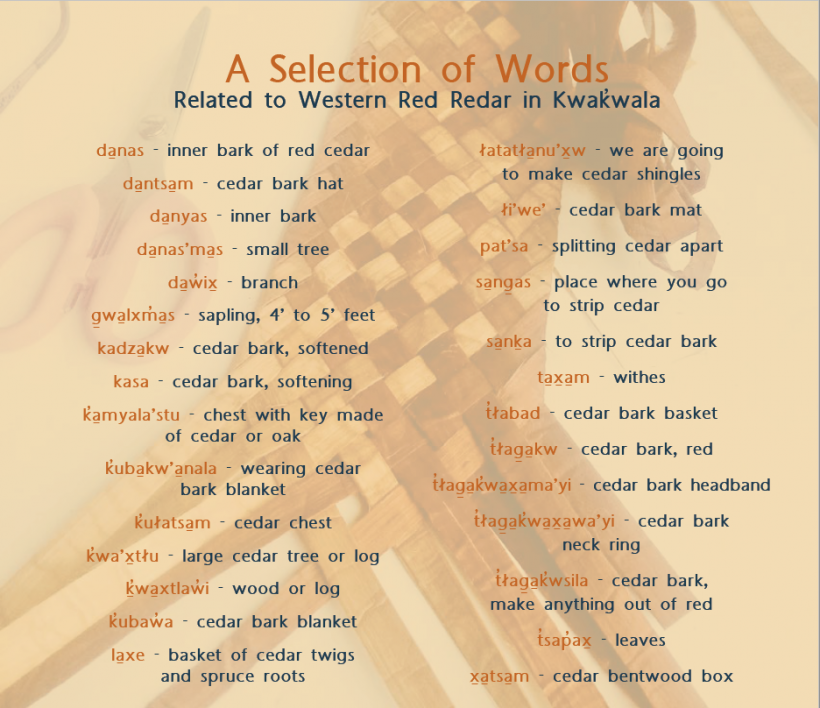 Stories’ and Ceremonies’ Connection to the Land

“Potlatch: a strict law bids us to dance. We dance to celebrate life, to show we are grateful for all our treasures. We must dance to show our history, since our history is always passed on in songs and dances. It is very important to tell the stories in exactly the same way. We put our stories into songs and into dances so they will not change. They will be told the same way every time. We use theatre and impressive masks to tell our ancestors’ adventures so the people witnessing the dance will remember it.

“The ceremony to tell our stories and to show social changes such as birth, marriage, name giving, standing up a new chief and death is called a Potlatch. In the Chinook language it means ‘to give.’ The people we invite are not only guests. They are also witnesses of our Potlatch and we give them presents for being a witness.”

This quote from the U’mista webpage signifies the importance of songs, stories, and ceremonies to the Kwakwa̱ka̱’wakw culture and governance system. The language in our stories and ceremonies contain teachings and protocols — and if you listen and watch carefully, through the stories and ceremonies of the Kwakwa̱ka̱’wakw, you will understand our connection to the land. Our creation stories link us to specific places. The ’namima (clan) is regarded as the fundamental social structure of the Kwakwa̱ka’wakw. Each clan has descended from animals or supernatural beings represented by family crests. Our family crests, now expressed in regalia and button blankets, link us to our ancestors, who are worthy of respect and care. Clans feast together and have titleholders, who hold names, songs, and crests. Traditionally, clans had access to resource sites in clam beaches, herring spawning grounds, berry patches, halibut banks, clover-root fields, and rivers. During winter potlatches, dancers channel supernatural spirits and animals when they put on their masks and transform into their ancestors. To prepare for ceremony, it is important to use hemlock, Western red cedar, and medicinal plants to cleanse for this transformation. In Kwak̓wala, our ancient stories and songs describe what lands we are responsible to uphold.

“Looking at words, stories, and ceremonies is a way to find a cultural fit that is missing in state-led ‘solutions’ that are failing to provide permanent social and economic benefits to Indigenous Peoples.”

In the last couple of decades, many biologists and conservationists have recognized that we can learn from Indigenous knowledge and practices. For instance, researchers at the Hakai Institute are celebrating that for millennia the Indigenous Peoples of present-day British Columbia lived in the forests without degrading them, but actually made them more productive by the way they used them. Indigenous management practices included developing clam gardens, creating perennial root gardens in estuaries, and using fire to enhance berry patches. The forests grew taller and faster from the nutrients in clam shells and fire. This is a positive trend suggesting that Indigenous knowledge and practices are being valued as something that can contribute to land and resource management.

As well, in present-day Canada, in particular British Columbia, Indigenous rights are becoming recognized. Indigenous Peoples are in the process of rebuilding their governance institutions. While the approach, challenges, and goals vary depending on the unique characteristics of each community, there are common themes that emerge in these conversations, including ensuring cultural continuity, assertion of greater decision-making authority over lands and resources, and increased social and economic autonomy.

A resurgence of traditional decision making is important because the Kwakwa̱ka̱’wakw are surrounded by forests and waters. Our language, stories, ceremonies, and practices are interwoven and dependent on one another. Each is important and speaks to what Kwakwa̱ka̱’wakw are responsible to on the land and in the waters. As Kwak̓wala holds our kinship structures and history, it can describe who we are as a people like no other language can. While some of this knowledge would need to be protected, so can the teachings held within the stories and ceremonies be used to inform what needs to be protected. Looking at words, stories, and ceremonies is a way to find a cultural fit that is missing in state-led “solutions” that are failing to provide permanent social and economic benefits to Indigenous Peoples living surrounded by the forests. After some time given to rebuilding governance structures and to resurgence of cultural practices, we will be able to revitalize our words, stories, and ceremonies so that they will have a much wider applicability once again.

Andrea Lyall is a registered professional forester working with Indigenous forestry initiatives in Canada and the USA. She teaches Aboriginal Forestry at the Faculty of Forestry at the University of British Columbia, Canada. She is working on her PhD dissertation, with a focus on Indigenous perspectives on forests and culturally relevant forest governance. She is a member of the Kwakwa̱ka̱’wakw Nation.

Acknowledgements: G̲ilakas’la (thank you) to the Kwakwa̱ka̱’wakw elders and fluent speakers Audrey Wilson, Douglas Scow, Hazel Dawson, and Annie Joseph for your invaulabe work with the audio files for the plant dictionary; Drs. Pat Shaw and Mark Turin from the First Nations and Endangered Languages Program for your advice and assistance with the Kwak̓wala orthographies; Sarah Holland, U’mista Cultural Centre; and to Alex Wadsworth and Barb Malitipi, First Peoples’ Cultural Council for all of your work on the First Voices project. 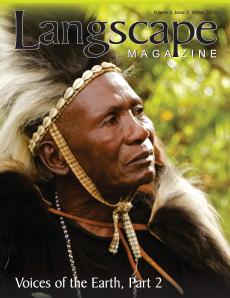 “This is such an amazing magazine, and is great exposure for Indigenous students and the many people that teach, support and are becoming educated on these successes.”   — Derik Joseph, Professor, British Columbia Institute of Technology