Elderly Newar men enjoy a leisurely morning outside their residence. Although a minority of the people living in the Kathmandu Valley, Newars are highly important contributors to the area’s biocultural diversity. Photo: Sheetal Vaidya, 2018

Evolutionary studies of the human brain conclude that intelligence is directly linked to meat consumption  —  not because of its nutritional qualities but because of the cognitive abilities that are needed for the strategic sharing of meat within groups. The intellectual capacity needed for such sharing is believed to be one of the factors behind the expansion of human brain size. Another meat-related development of major evolutionary importance is the domestication of large herbivorous animals, which changed both the course of human history and the evolution of the biosphere. Livestock  — when traditionally raised  —  has been an integral part of environment-friendly agriculture.

Meat eating is a part of human evolutionary heritage, creating social bonding in many cultures. This is very true of the culture of the Newar community, which is one of the oldest Indigenous communities of Nepal. The Newar are a linguistically and culturally unique group. The Newar speak several languages, divided between the Indo–Aryan and Tibeto–Burman language families, and practice both Hinduism and Buddhism. Out of the total population of Nepal, only five percent are Newars, mostly confined to Kathmandu Valley since prehistoric times. The valley, a scraggly, bowl-shaped terrain at the foothills of Himalayas, is roughly 1,400 m above sea level. Covering an area of 570 square kilometers, the valley is dominated by three major cities: Kathmandu, Bhaktapur, and Lalitpur. The valley was granted the status of a World Heritage Site by UNESCO (the United Nations Educational, Scientific, and Cultural Organization) in 1979. Newars are the creators of the valley’s historic civilization, and their rich knowledge of agriculture has influenced the culinary tradition of Nepal. Regardless of their being a small minority, they still define the culture, arts, crafts, and the overall aesthetics of the three cities.

Newar women in their home-woven characteristic attire participate in a special ritual called Mattya, or the Light Walk Festival, by walking around shrines in the city. They pray for departed relatives to follow the footsteps of Buddha, who is considered the light of Asia. Photo: Manju Maharjan, 2018

Newars observe special rituals and festivals from birth to death. All of these occasions involve gatherings of family members. Roasted meat salad, called Haku Chhoyala (“dark roasted meat”), is one of many distinctive dishes that Newars share during such celebrations. For certain rituals and festivals, it is considered indispensable.

Left: Among the Newar, men are in charge of cooking elaborate dishes, including Haku Chhoyala, for special occasions. Women are responsible for cooking everyday meals. Photo: Manju Maharjan, 2018. Right: Using dried straw for the fire to roast the meat is considered healthy as it does not leave behind residues on the meat. It does leave behind ash, but that is supposed to be good for digestion in this part of the world. Photo: Manju Maharjan, 2018

Left: The meat is roasted until it is black outside. Haku literally means “black” in Newari and Chhoyala means “roasted meat.” Haku Chhoyala tastes best when only the muscles from the animal are used, whereas the other parts, such as skin and fat, contribute to other special meat preparations. Photo: Manju Maharjan, 2018. Right: Community members chop the roasted meat into manageable portions of bite-sized pieces. Usually consumed as a protein supplement along with plant-based items, only a couple of pieces of meat are served on a plate during the feast. Photo: Manju Maharjan, 2018

The source of the meat for Haku Chhoyala is surplus male buffaloes (Bubalus bubalis), which have been domesticated in India and the warmer parts of Nepal by the crop-growing population. Since eating beef is prohibited in Nepal because of the religious importance of cows, buffalo meat is used as the source of a high-calorie protein diet. The traditional way of roasting the fresh meat is over burning rice and wheat straws, and it’s then tossed into a salad while adding distinctive ingredients such as ginger paste, rice beer, salt, red chili powder, garlic leaves, and mustard oil. The ginger paste and rice beer provide moisture and tenderness to the meat, while salt, chili, and garlic add spice. The freshly pressed mustard oil helps to maintain the taste of the meat salad for a longer period. 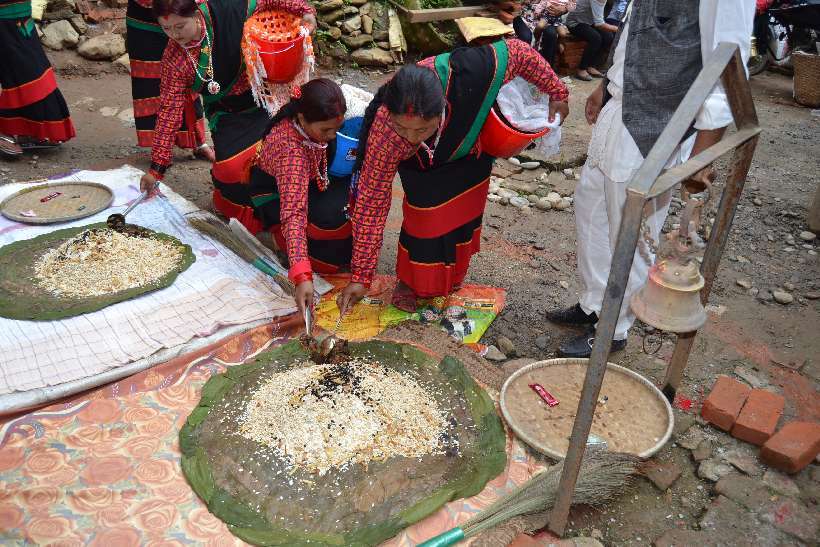 During Mattya, portions of beaten rice, potato, and Haku Chhoyala are placed as offerings for the deceased. Haku Chhoyala is the first item to be offered on this huge plate sewn from Shaal tree leaves. Photo: Manju Maharjan, 2018 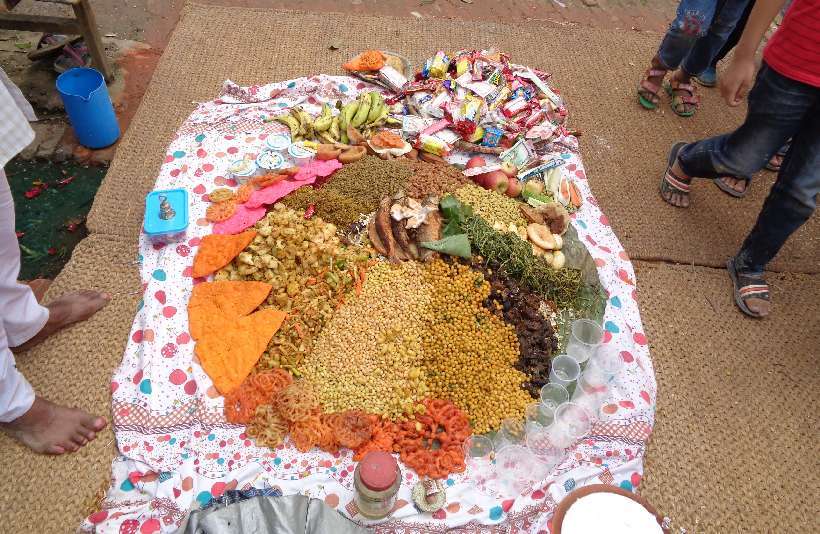 The plate is full of various foodstuffs, consisting of sweets, vegetables, and biscuits along with Haku Chhoyala, as well as some money. The plate is deliberately made full to ensure the departed souls have plenty of everything in the afterlife. Photo: Manju Maharjan, 2018 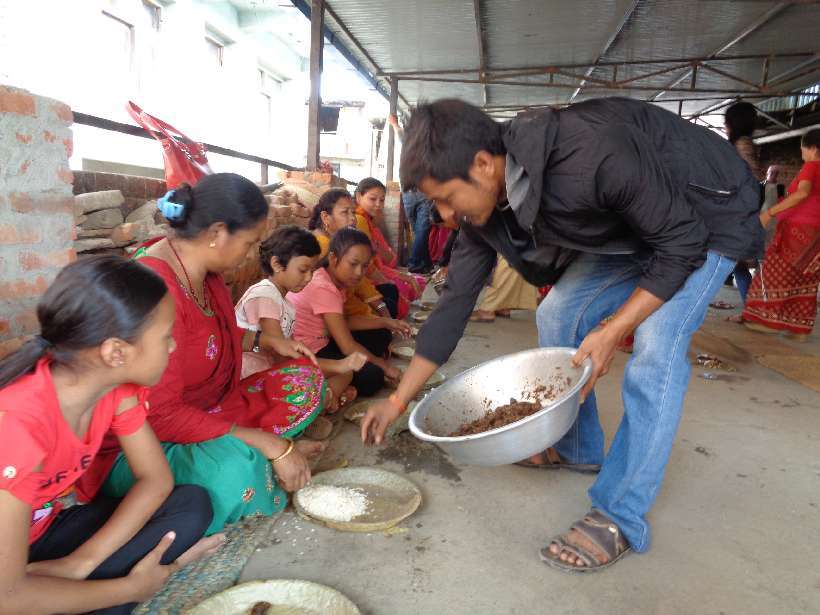 At a feast, family members and invited guests sit down in a row on traditional mats woven with dried rice straw, using leaf plates made from the shaal tree (Shorea robusta). During such feasts, the hosts serve food following a definite pattern. As a rule, Haku Chhoyala is served right after a course of rice and before other vegetable dishes. Photo: Manju Maharjan, 2018

Covering the salad in oil is an ancient practice of preserving food that came into use long before refrigeration. This simple yet unique method of preparation dates back centuries and the community continues to regard it as a symbol of prosperity and well-being. The preparation itself involves community bonding because the meat is usually roasted by the members of more than one family while performing many rituals. The aim is to keep the entire network of social relations in the Newar community strong. The salad is essentially offered during several annual rites and served in everyday meals as a side dish as well as with snacks.

The preparation itself involves community bonding because the meat is usually roasted by the members of more than one family.

Many restaurants serving Newari cuisine have opened up in the valley, which has allowed Haku Chhoyala to reach a wider population. In these eateries, the traditional method of preparation is kept alive by enthusiastic Newari chefs, and the remarkable meat salad now increasingly delights the palate of non-Newar Nepalese and foreigners alike. 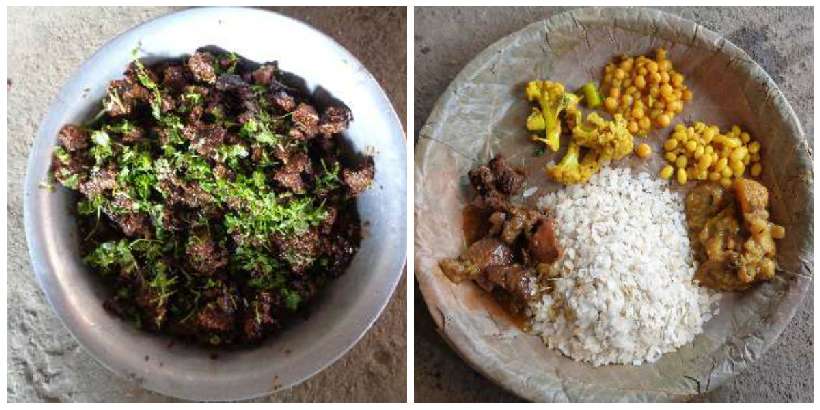 Left: The meat is first marinated with ginger paste and then tossed with salt, red chili powder, traditional rice beer, and fresh mustard oil. Greens such as garlic and coriander leaves are added for texture and flavor. Photo: Manju Maharjan, 2018. Right: Curries of beans, cauliflower, potato, and meat are some other dishes served during the feast. Meat dishes are regarded as the symbols of prestige and affluence among the Newar. Photo: Manju Maharjan, 2018 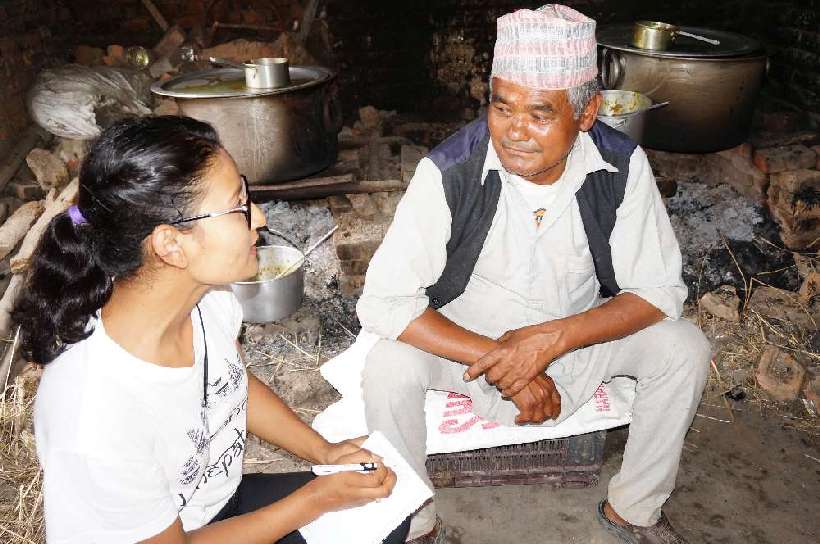 An elder community member and the head chef, Dharma Bhakta Maharjan, shares the recipe for Haku Chhoyala and recounts the cultural significance it carries. According to him, sons-in-law of the family participate in the roasting process, which is essential for the cordial relationship between the families. Photo: Sheetal Vaidya, 2018

Left: These days, Haku Chhoyala is also served in a number of new restaurants in Kathmandu Valley. Harati Newa Chen is one of them. Office workers gather there for afternoon snacks, and many non-Newars can be seen enjoying the unique Newari cuisine. Photo: Sheetal Vaidya, 2018. Right: Served with popular Nepalese dumplings and a cup of hot tea, Haku Chhoyala contributes to a delicious meal. It is one of the most sought-after combinations in the local eateries. Photo: Sheetal Vaidya, 2018

Acknowledgments. We appreciate the Newar families of Kathmandu Valley for welcoming us to their festivities, as well as their communal rites, and for sharing with us the detailed information on the recipe for and cultural references of Haku Chhoyala. We are grateful to all the Newar community members for granting permission to publish their photographs.

Sheetal Vaidya, PhD, an Associate Professor of Botany at Tribhuvan University in Nepal, has taught for more than 30 years. Her research explores plant systematics, floriculture, and biocultural diversity. She comes from a family of the Newar community residing in the city of Lalitpur in Kathmandu Valley.

Manju Maharjan graduated from Tribhuvan University with a bachelor’s degree in botany. She too belongs to the Newar community of Kathmandu Valley. During her undergraduate days, she won accolades for her research on the phytocultural knowledge of her home village and is pursuing more research on the biocultural heritage of the community.

Prakash Khadgi is Associate Professor of Botany, also at Tribhuvan University, with teaching experience of over 25 years. He specializes in physiology, pathology, and biocultural diversity. He too is an Indigenous Newar of the Kathmandu Valley, actively engaged in preserving the natural heritage of the nation.