Mangroves, Education, and Recovery of the Territory: Biocultural Diversity in Bahía Solano, Colombia 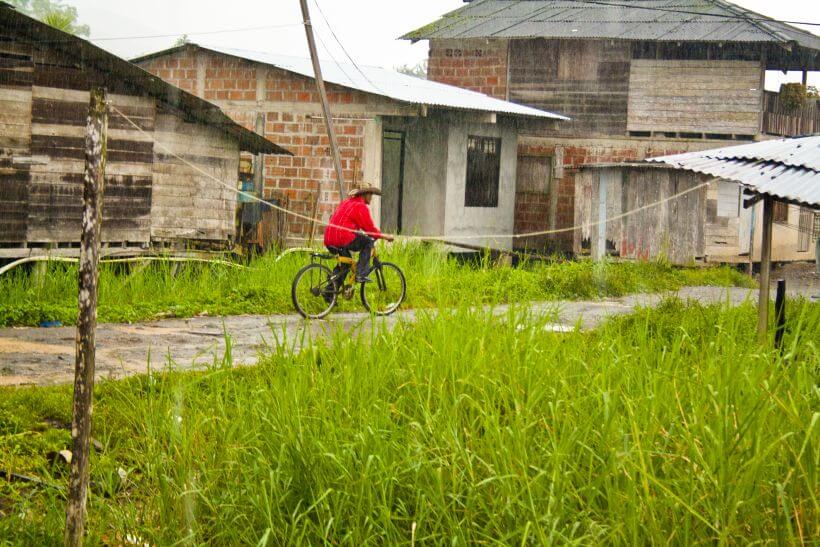 Rain defines a great deal of the social relations that take place in the municipality of Bahía Solano. The area’s geographical position produces meteorological variations owing to the change in air currents. This results in constant rainfall in the region, reaching an annual average of almost 5,000 mm. Photo: 2015

Bahía Solano is a municipality located in the Chocó District on the Pacific coast of Colombia, which over the past decades has undergone profound social and cultural transformations. A decree by the Colombian government created Bahía Solano as an agricultural colony in 1935. Under these circumstances, dozens of peasant families from around the country were brought in to settle and farm there. In addition, between the 1980s and the 1990s, the area began to witness a new wave of migration of people from different parts of the country, who arrived in the municipality to establish a variety of commercial activities.

These changes now define the relationships with and modes of appropriation of the land by its current inhabitants. That makes Bahía Solano a cultural diversity space where the mestizo, black, and Indigenous communities develop their distinct lifeways and establish different links and relations with local ecosystems, such as mangrove forests, the Pacific Ocean, and large tracts of rainforest. 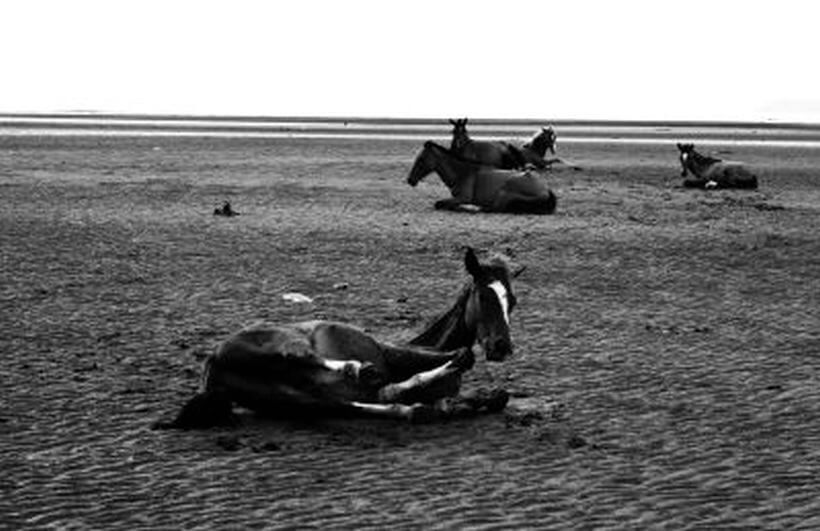 Tidal phenomena also mark the everyday life of the people of Bahía Solano. Fishing, travel by sea to other districts or municipalities of the Pacific region, and even household chores are influenced by tidal changes in seawater level. This photo shows several horses resting on the beach at Ciudad Mutis (the municipal seat), where at low tide the water retreats for hundreds of meters. Photo: 2015 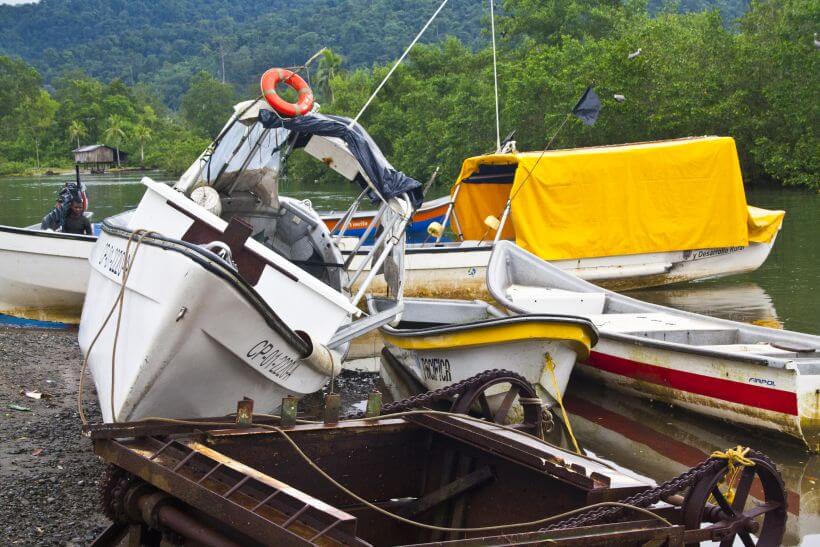 Bahía Solano is a municipality with a strong fishing tradition. For more than two decades, the local fishermen have been developing an interesting organizational process to ensure the conservation of marine ecosystems and food sovereignty of the people of the Colombian Pacific, by means of the exclusive practice of artisanal fisheries throughout the municipality. In this photo, several boats are seen on the banks of the Jella River, an area that marks the departure and return of local fishermen to and from the vast waters of the Pacific Ocean. Photo: 2014 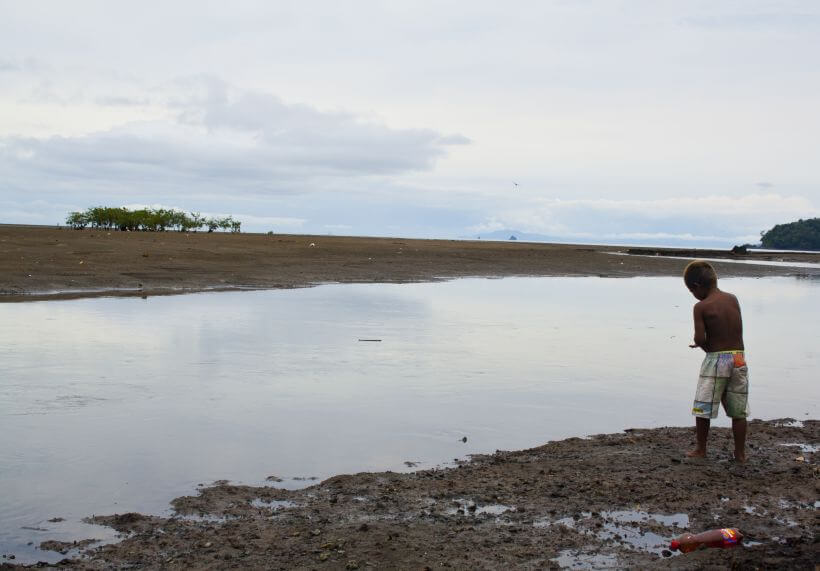 Fishing is not an exclusive activity of adults in the region. A number of children in Bahía Solano build knowledge about fishing on a daily basis, from experience of and a direct link to the territory—a circumstance apparent in this picture, in which a child from a local Indigenous community is fishing in the vicinity of a mangrove strip in the Viejo Onetti neighborhood. Photo: 2015 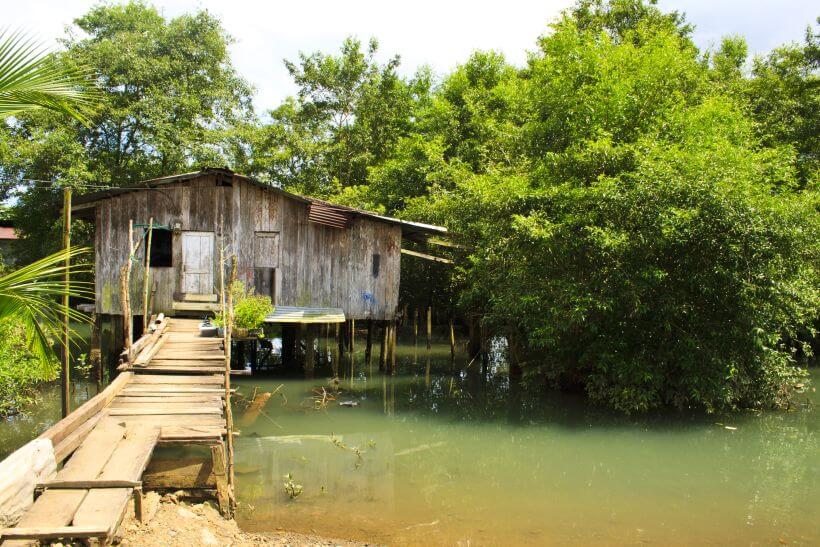 As a result of population migration to the municipality through the past several decades, many people have established their homes in mangrove areas, causing severe environmental impacts. The problem is illustrated in this picture, taken in the area of Ciudad Mutis, which stands out as one of the sites with the highest rates of anthropogenic intervention. Photo: 2015 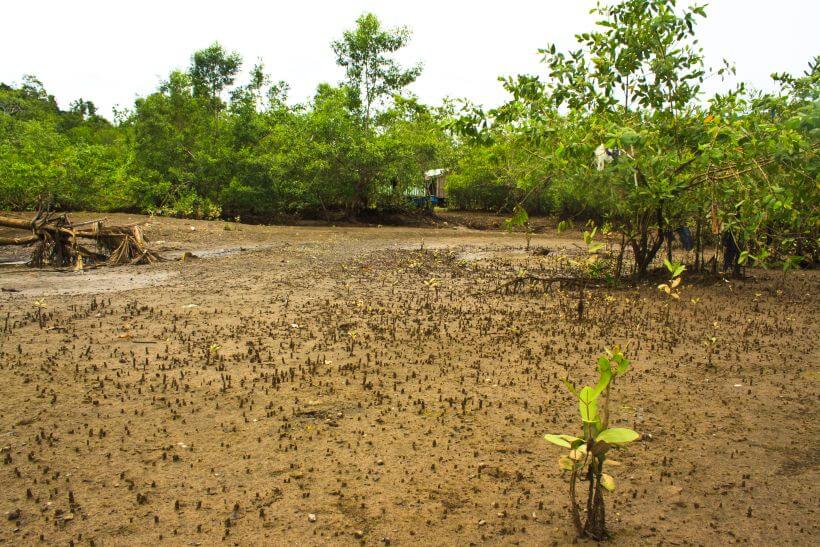 Another threat to the mangrove ecosystem is the high rate of deforestation of some mangrove species for various uses, particularly the use of major species such as the nato mangrove (Mora megitosperma) for timber, among others. Photo: 2015 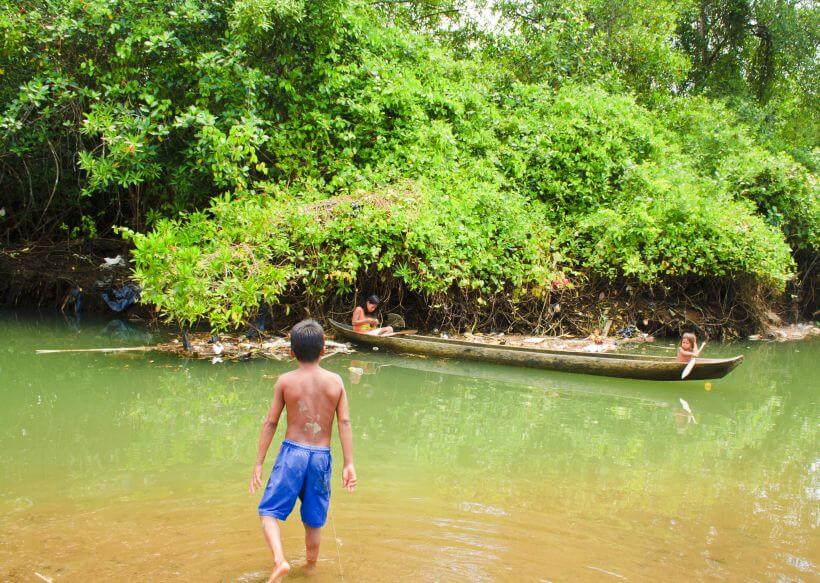 Solid waste pollution is perhaps one of the most visible signs of anthropogenic intervention in mangrove forests. In this photo, a local student is seen fishing near the Chitré neighborhood’s mangroves, which appear quite contaminated by solid waste. However, it is important to realize that the cause of the physical impacts on mangroves lies largely in the low level of sense of place among a large sector of the population—a phenomenon related to migration. Photo: 2015 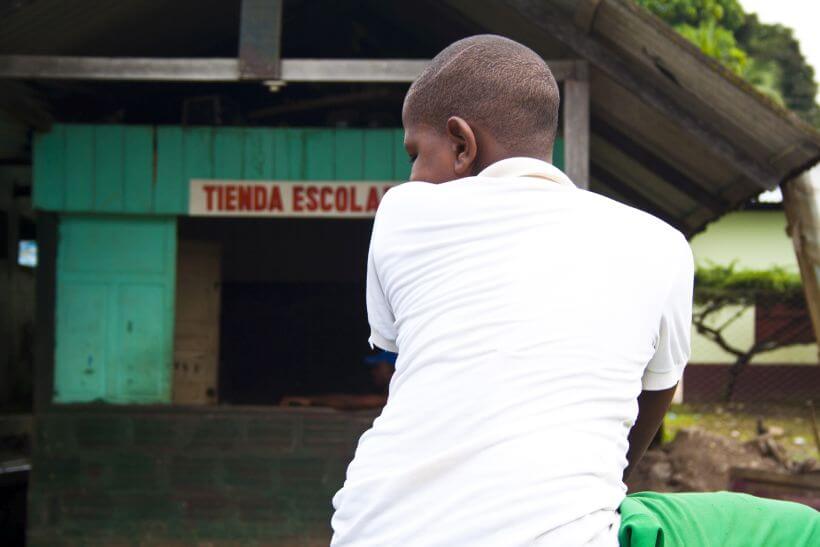 The Luis López de Mesa Educational Institution has undertaken major educational efforts to ensure that both students and the community at large develop a sense of ownership of and belonging to the territory, as a main avenue to conservation of biocultural diversity in the region. The picture shows the Luis López de Mesa School after a rainy day. Photo: 2015 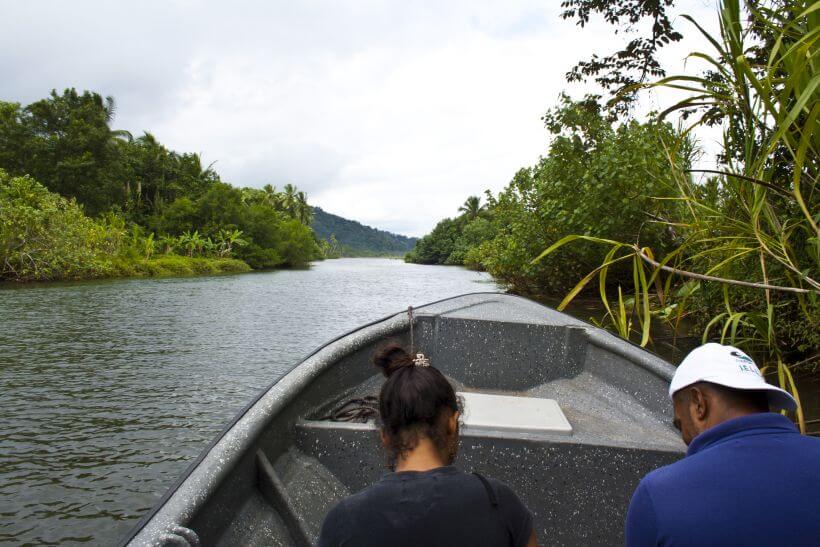 Among the key agents of the social transformation processes arising from the efforts of the Luis López de Mesa Educational Institution are the teacher Edgar Molina Maturana and several of his students, who are grouped in a research team that has chosen the name Propágulos, from the seeds of the piñuelo mangrove (Pelliciera rhizophorae). In the photo, the teacher and one of his students are on a field trip surveying environmental conditions in other districts of the municipality of Bahía Solano. Photo: 2015 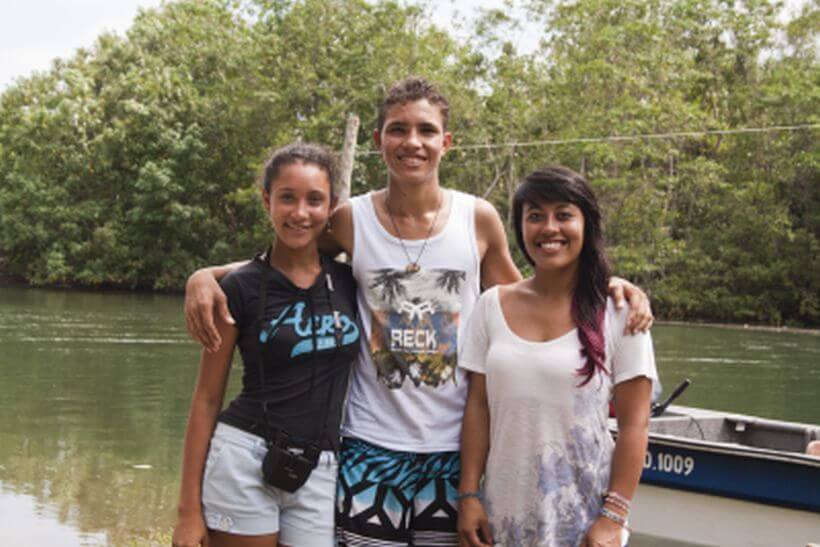 The National Pedagogical University of Colombia has been working with the community and the Educational Institution since 2013, contributing to the development of alternative curricula that promote community empowerment and a sense of ownership of the territory among students and the community. For this purpose, the two main building blocks are the teaching of biology in context and the affirmation of the society-school nexus. The photo portrays Hilary Villarreal and Albis Pinedo, students from the local research team, and Alexandra Arévalo, researcher and student at the National Pedagogical University. Photo: 2015 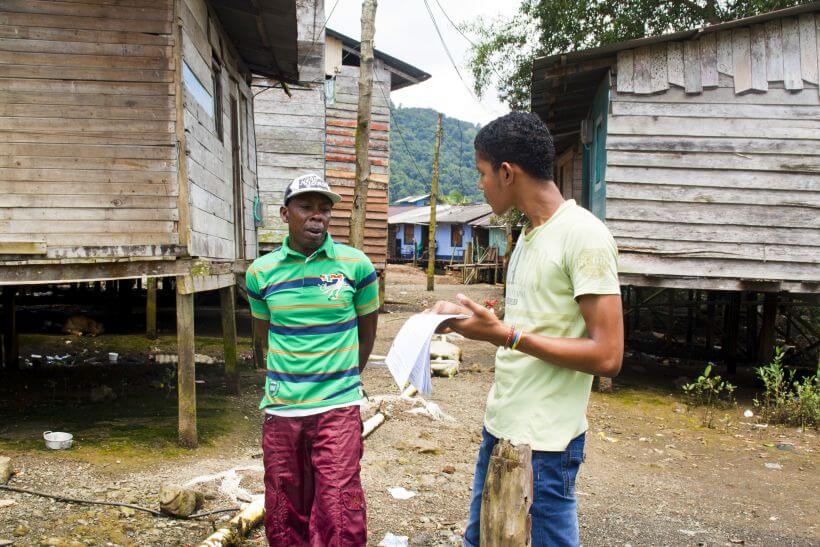 The progressive transformation of the curriculum is a notable result of the process of collaborative research between the Educational Institution and the National Pedagogical University, based on the local communities’ and children’s concepts, beliefs, practices, and relationships with nature. In the photo, one student from the research team is interviewing a local resident about their concepts of and practices around mangrove ecosystems. Photo: 2015 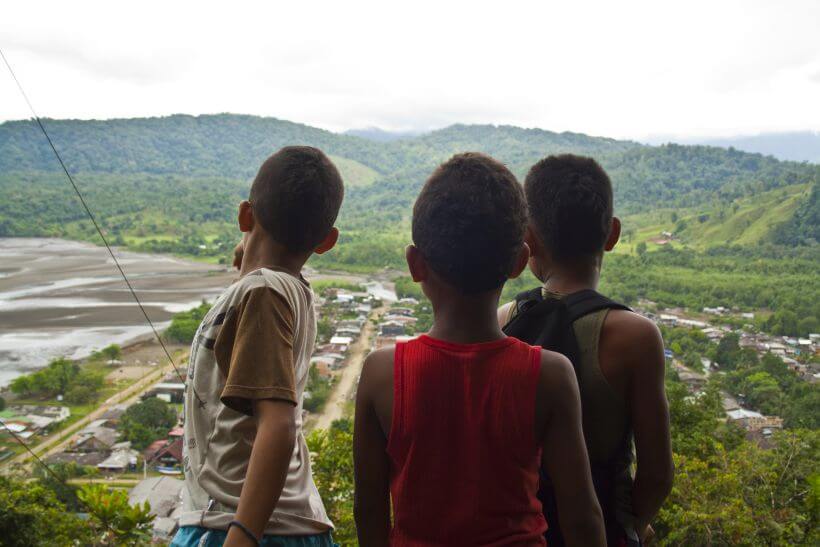 Educational initiatives in Bahía Solano have focused mainly on secondary students. However, it has become apparent that, in order to democratize knowledge, it is important to involve primary school students in researching and surveying the territory. Three children are seen in the picture observing the municipal seat of Bahía Solano from one of the highest points found in this region. Photo: 2014 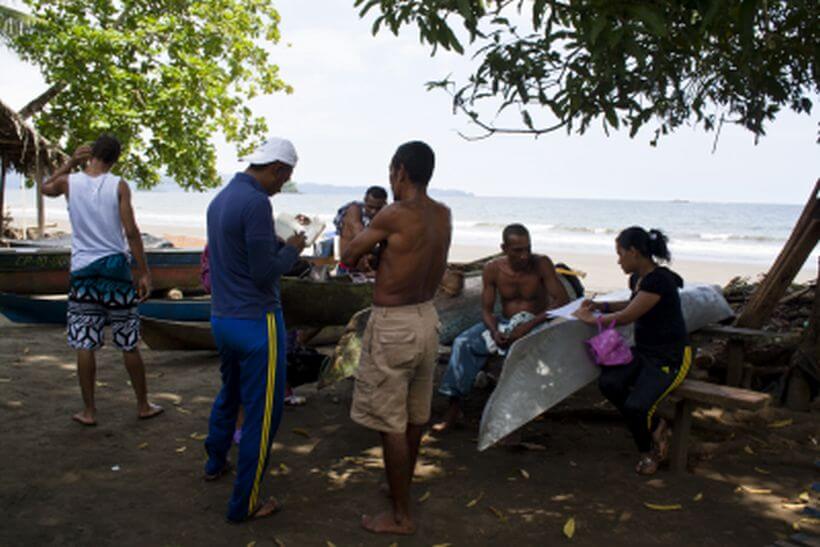 The educational approach emphasizes that to develop a sense of ownership of the territory and transform the individual and collective realities of students and community, it is necessary for students to begin to familiarize themselves with the territory they inhabit through teaching in context, field trips, and intercultural dialogues with different stakeholders in the municipality. In the photo, some of the Propágulos (research team participants) interview local people. Photo: 2015 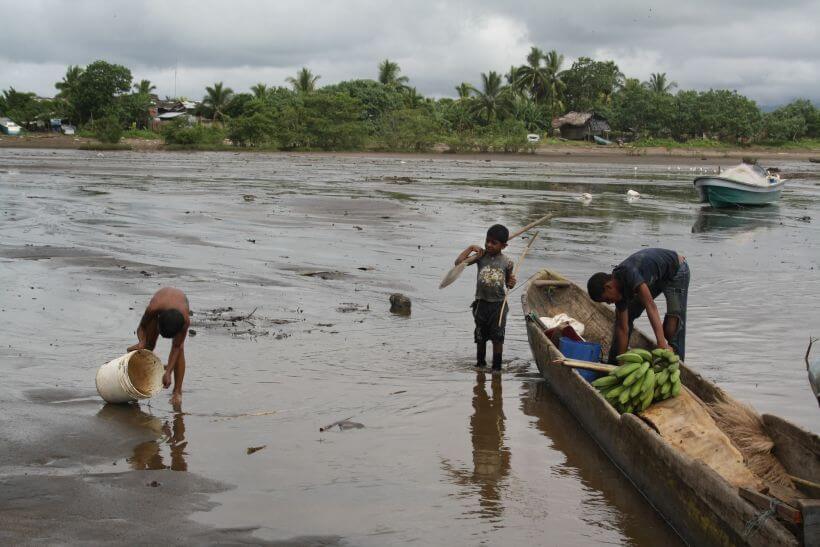 Ultimately, the community plays a central role in promoting educational processes and the sense of ownership of the territory among Bahía Solano children. Efforts are underway to establish links between the school and the local families and social organizations, as a means toward the progressive reconstruction of the social fabric of this territory. In the picture, two children and an adult are seen on the way back from a canoe trip, carrying a bunch of bananas and catching some blue crabs locally known as jaibas. Photo: 2014

We wish to thank the people of Bahía Solano and the Luis López de Mesa Educational Institution for allowing us to work with them for social transformation and conservation of biocultural diversity in the municipality.

Back to Vol. 4, Issue 2 | Read the Table of Contents | Like Our Stories? Please Donate!

Felipe Rodríguez Moreno is a graduate in Biology Education at the National Pedagogical University of Colombia and co-researcher in the research group “Biology Teaching and Cultural Diversity.” He is interested in the relationship between nature, culture, and conservation of biocultural diversity in rural communities in Colombia.

Norma Constanza Castaño Cuéllar is a Research Professor, a biologist with a master’s degree in Educational and Social Development, a PhD candidate in Education, and director of the research group “Biology Teaching and Cultural Diversity” at the National Pedagogical University of Colombia.