Photos and text by Sonja Swift

When it rains in California I rejoice. I see the land drinking. I see grass blades emerging, shining jade green where there was only thatch, brittle and crisp, next to a stone-dry cow patty. I know the dusty taste of summer here, and the dread of summer prolonged. I know the feeling of thirst, land thirst, pastures turned to dirt. It’s an achy, dizzying feeling of disorientation when the Pacific gales don’t make their way to shore. And even when “drought” doesn’t make headlines and the reservoirs are high and snow pack sure, I still rejoice when the rains come because the balance is taut and I, like the land, need nourishing.

The Hawaiian word for land, I learned recently, is ‘aina — that which nourishes you.

I grew up on a California farm and ranch where we raised longhorn cattle and subtropical fruit. Chumash Indian territory. Bordered by neighboring ranches in all directions, lands that were parceled off centuries ago when the starving Spaniards killed off the grizzlies to feed their expanding missions. Bears are gone now, though the elusive cougar still roams and coyotes still yip and hoot the nights away. Live oaks with their gnarled elephant skin limbs grow plentiful in the valley, which is not usually the case elsewhere in oak country where cattle overgraze, developments encroach, and industrial agriculture dominates. The creek runs more silently, trout don’t return like they used to. An old-timer down the road, since passed, told me once just how loud they used to be splashing their way upstream. I grew up in close contact with this landscape; in many ways the land raised me. This original imprint formed me in an essential way, and I’ve since had to piece together the stories of what and who went missing before I was even born.

The sunburnt summer thatch I grew up with, that in times of drought makes California rangelands look like sand dunes, is a direct result of the early Spaniards and Portuguese thinking California was Spain or Portugal and treating the land as they were used to treating their homelands back in Europe. So commenced the overgrazing on hills that weren’t accustomed to horse hooves and such condensed numbers of cattle, loss of perennial species replaced by annuals, and the dismissal of fire as a tool for tending landscape. Disregarding the stewardship and ecological know-how of the locals, in this case the Chumash and Salinian people, wreaked havoc on the landscape.

I grew up in close contact with this landscape; in many ways the land raised me.

My people don’t come from the place I was raised in. My mother is a Dane and my father grew up in the city of Los Angeles. I am learning how to name my own sense of belonging and land-based worldview. Lacking any place-based cultural guidance, in many ways I’ve started over. I don’t know the feeling of this as a shared experience, where generations upon generations still occupy the very landscape where their ancestors are buried, where their legends took place and creation stories originated. The old ways of my people are buried deep in black soil, beneath amber hunks and rye stalks, in stones and blood, beyond the eastern edge of this continent in the northern hemisphere on the other side of the Atlantic Ocean. What I do know is what it feels like to grow up on a land base and to be the wide-eyed child who forges a life-long alliance with place. I know this original experience of love.

Embodiment studies philosopher, Ellie Epp, gave me a framework for naming the essentiality of this. She writes, “The destruction of beauty, of complexity, of physical coherence, all of these are forms of destruction of mind, that is, of practices of intelligence that depend on the flourishing of the natural world.” In other words, without intact landscapes in which humans can participate, they will become only more dead to the world — or die of broken hearts. To destroy the physical coherence of intact ecosystems is to destroy our multi-faceted means and very potential for high, coherent intelligence. It is a reframing of the argument for the preservation of nature that Epp offers. The importance isn’t isolated to protecting the sequoia or wolf, or otherwise for one’s liking as a recreationist. No, it is deeper than that. “It’s a worry about minds that don’t have enough world in them. Minds that don’t have enough world in them are wrecking the world, but they are also wrecking themselves.”

This is a political statement in and of itself and one that further undergirds the irony of big-money conservation or corporate greenwash initiatives kicking Indigenous people off their homelands under the guise of a wildlife corridor or “carbon-offset” project, functioning from the same old colonial segregation of biological from cultural  —  the very split that the term biocultural seeks to repair. One might otherwise consider that the people molded by the landscapes that others seek to safeguard are the ideal caretakers for that landscape because their knowledge and perception originate in direct response to that place.

Isak Dinesen, aka Karen Blixen, writing about Africa in the early 1900s, expresses embodiment science by describing how land-stealing is robbery of more than one’s land: “It is more than their land that you take away from the people, whose Native land you take. It is their past as well, their roots and t their identity. If you take away the things that they have been used to see, and will be expecting to see, you may, in a way, as well take their eyes.” What people grow up seeing is what they are then physically structured to go on seeing. In the words of author Hugh Brody, “The clearing of minds is inseparable from the securing of lands. And the loss of words that hold history, knowledge, and heritage devastatingly compounds all other forms of dispossession.” Like the act of stealing land, destruction of landscapes is another way of making people go blind with displaced fury and a lost sense of self.

There is a nuclear power plant appropriately named El Diablo that is situated some 30 miles as the crow flies from my home ranch. California is known for earthquakes, and they’ve located a fault a few miles off the coast from where radioactive waste is being stored. A few years ago, when I was back living there, I stood up at a community meeting called to discuss prolonging the operations of this plant and said, “I live up Clark Canyon. I was born and raised there. It is my home. And, you know, we’ve got a siren that PG&E [Ed.: the local power company] tacked up to one of those power lines that run through our valley. It hangs there, blank white, a reminder. Should that siren ever start blaring it means one thing: that we’ve got to run like hell and never come back.”

Territory, like body, is essential in its entirety, its wholly integrated health. Robertico taught me that. Roberto Marin Noreña, a Barasana elder and ~Kubu (one who cures the season/shaman) had to patiently explain to the Colombian Minister of Culture that He Yaia Keti Oka, his people’s worldview, is like a body, and protecting just the head or foot is not good enough. The discussion at the time had been around the matter of officially recognizing the cultural patrimony of the Barasana, Tatuyo, and Makuna tribes who live along the Pirá Paraná River in the Northwest Colombian Amazon, as the minister had only been thinking in terms of a single traditional dance rather than the entirety of a complex worldview rooted in territory. So Roberto traveled to Bogotá to help enlighten the minister and explain that He Yaia Keti Oka cannot be compartmentalized; one must protect the body, hence the territory, as a whole. In this way, official recognition of cultural patrimony for the people on the Pirá Paraná and the safeguards that come with it would extend to the land underfoot, at threat from gold mining interests.

Drawing connections between body and land  —  or otherwise biological and cultural — has been and continues to be an act of rebellion.

His explanation proved successful, and after many long community meetings cultural heritage was granted by UNESCO for a worldview, and hence a region. While mining threats persist, this framework stands as a powerful example, and one that has helped me articulate what it is I value about the patterns mirrored between body and land. When culture reflects landscape and lives in sophisticated contact with landscape, life exists in balance. Rivers run clean. Forests stand tall. Wild game and fish are plentiful. People are healthy. But when culture denies the way we mirror one another, or forgets to care, or permits access only to the economic elite, then things run astray. Tap water ignites. Food crops are poisoned with war chemicals. Forests get razed. And as a people we all suffer. In the farthest northern reaches, reindeer are eating lichen soaked in radioactive fallout. On windowsills in San Francisco, coal dust accumulates, blown in on westerlies from China. We’re all in this together.

To disregard diversity, favoring blueprint plans for the next suburb or oil field, is to regress, to be absurdly unimaginative. It is to limit one’s very potential. A sterile, exhausted landscape, a bombed and desiccated city, creates a parallel kind of mind  —  a traumatized mind. Intelligence and creativity rely on contact with the exquisite complexity of the web of life that surrounds us, and there is nothing as complex, detailed, and minutely stunning as the evolutionarily adapted, coherent complexity of this planet. The intoxicatingly red earth of a dry creek bed imprinted with cougar tracks, the myriad colors and textures of prairie grasses that make an autumn walk feel like one has entered a trance, the nuanced and multi-colored variations of Andean potatoes, the sound of a wolf ’s howl echoing.

Land-based embodied knowledge is the very intelligence exiled by rampant industrialization and the technological age. This fierce knowing stands in the way of systems built on exploitation and dependence. This is why drawing connections between body and land  —  or otherwise the biological and the cultural  —  has been and continues to be an act of rebellion.

Sonja Swift is a freelance writer. She holds an individualized masters from Goddard College, with a thesis titled Bravery, Body, Land and Knowing. Writing is her creative medium for grappling with the complexity of our times. She calls home between San Francisco, California and the Black Hills in South Dakota, USA. 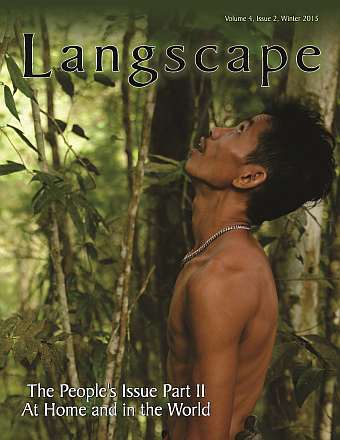 “The articles are all so rich in elucidating the resilience of biocultural diversity. I appreciate all of the work Terralingua does so very much.”  — Nejma Belarbi, MSc, MH, Ethnobotanist and Herbalist