My Extinction Rebellion Through Education: A Young Dohoi Woman’s Message

Every morning, waking up in her village of Tubang Habangoi, Lina would hear the sounds of the gibbons coming from the hills across the river. Photo: Lina A. Karolin, 2020

One morning, I woke up early and, carefully parting the mosquito net that hung above me, I walked to the window next to my wooden bunk. I opened the window gently, trying not to make any noise so as not to wake the others up. It was dim outside, but I could see a gleam of light from the sun that was slowly rising in the east, behind the trees on the hills upstream of the river.

I took a deep breath, and felt the cool morning breeze brush my face. I could see the vapor coming out of my mouth when I breathed. I squinted to look at the hills across the river, still enveloped in fog. It seemed that I wasn’t the only one who had woken up early that morning. As usual, the gibbons started to sing from the forest on the hills. I couldn’t see them but knew that, behind the fog, they were swinging from tree to tree with their family. Their sound was a delight to my ears. That was one of my morning routines when I was living in my village, Tumbang Habangoi.

Right in the center of the island of Borneo, on the border between the provinces of Central and West Kalimantan, Indonesia, Tumbang Habangoi is home to more than a thousand Dohoi people, a subethnic group of the Uut Danum Indigenous Dayaks.

A view of Tumbang Habangoi. As it was harvest time, most villagers had gone off to the fields. Photo: Lina A. Karolin, 2020

Less than forty years ago, you wouldn’t have found any high school or bachelor graduates in my village, let alone anyone with a stable income or job. Day by day, our lives depended on nature, as we hunted, fished, and practiced shifting agriculture. We took from nature only as much as we needed and didn’t bother with anything else. But since then, environmental destruction has begun. 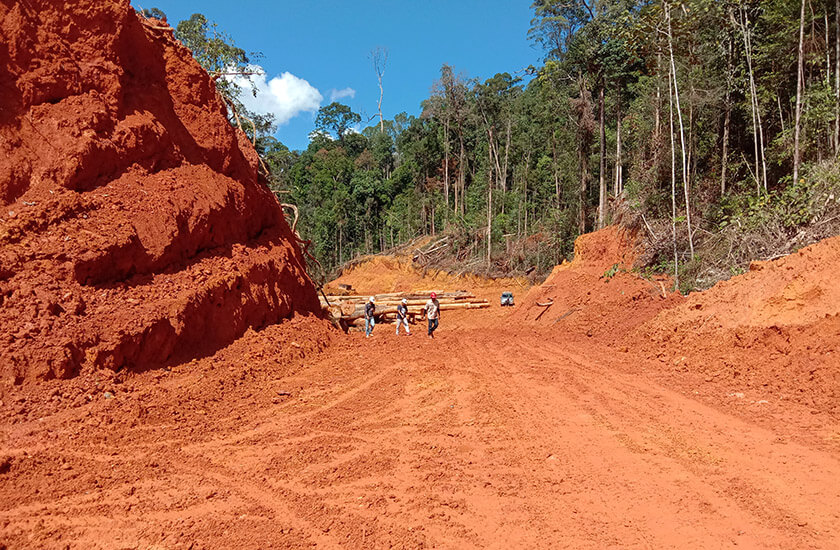 The first logging company came before my mom was born. They chopped down and took away the trees from the forest near our village. I remember that, when I was a kid, there was this strange thing that those people drove: it was yellow, with two jagged wheels like a chain and a big rectangular iron plate in front, which would tear down everything that stood in its way. It even uprooted trees and made the soil crumble. It was a bulldozer, a mighty powerful thing I had never seen before. Then there were two other strange vehicles, which they named a loader and a logging truck. We called one of them the “crab” because it had two large iron claws that moved the huge logs from the ground onto a big vehicle we named the “logging,” which was used to transfer the logs from the forest to the nearest port in our region, Katingan. The youngsters were amazed by those massive vehicles. To me they were frightening, however, as they demolished and took away everything in the forest. 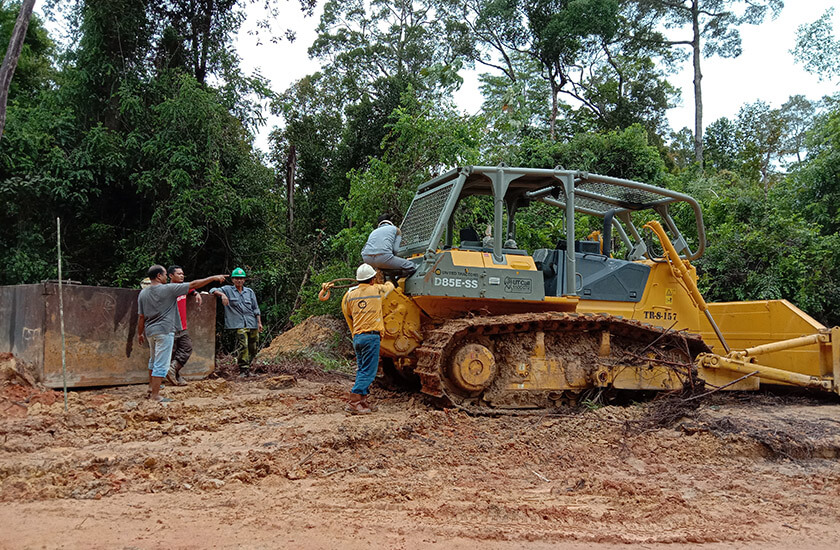 A yellow bulldozer used to pull logs out of the forest. Photo: Martiono Hendrawan, 2020

As villagers, we saw those people invade our land and take the resources that even we locals couldn’t take without getting arrested by the authorities. We couldn’t prevent our home from being destroyed and our livelihoods from being lost, because we had no control and permission didn’t come from us. Many years ago, we came to the conclusion that the only thing we could do about it was to cooperate with the logging corporation.

As villagers, we saw those people invade our land and take the resources that even we locals couldn’t take without getting arrested by the authorities.

I thought we had already given up on nature and handed our homeland over to them. Until one day, long after I had left the village to pursue my education, I had a conversation with the village chief, a strong-willed young man not much older than myself. That conversation enlightened me.

“We can’t protest a huge corporation and ask them to stop doing what they do,” he said thoughtfully. “Their system is very solid and they have permission from the government. The best thing we could do was to try and cooperate with them. What we can do now that is within our powers, though, is to preserve our village and its forest surrounds.”

I worried because we are very dependent on the forest and its resources. Everything we need was provided by the forest.

“Many people came from other villages to ours,” he continued. “They wanted to mine the Bahangoi River, the river we use for bathing, fishing, and transportation, and whose water we drink and cook with. But the Elders refused to give permission to those people to do illegal mining in the river. The damage would cost us more then we can imagine. Do you see the Katingan River? The Kahayan, the Kapuas, or other big rivers on this island? They all have a brown color like white coffee. That is caused by illegal mining! We would never want for that to happen to our river.” 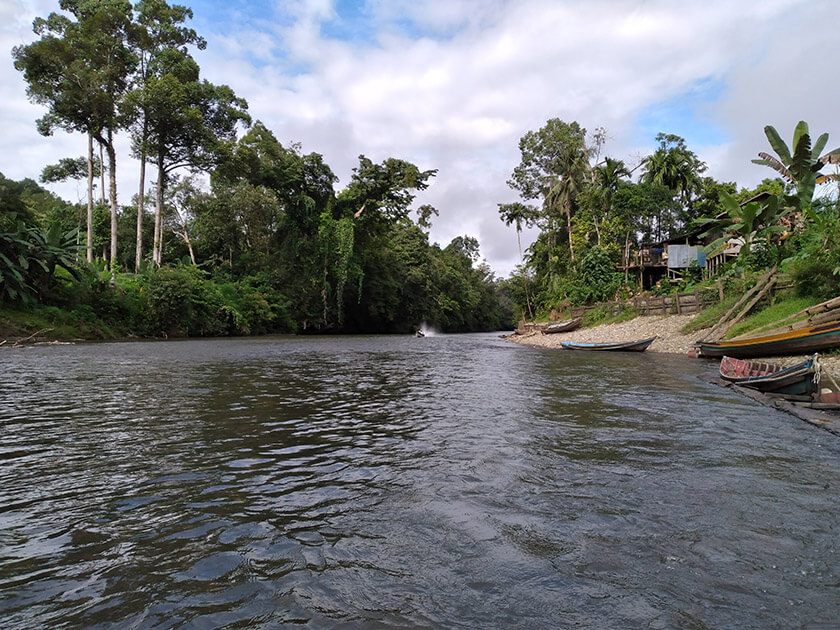 The Bahangoi River, which Tumbang Habangoi villagers still use as a transportation route. Photo: Lina A. Karolin, 2020

“It’s good to know that the Elders and the villagers agreed to such a positive thing as protecting our environment!” I commented. “But for how long? I’m afraid it’s not only about the river, but also about the forest and the animals. Different generations will have a different point of view and may make another decision that might lead to more harm.”

I worried that in the near future my people would live in poverty and become strangers in our very own land.

He sighed before replying: “We can’t control people so that they won’t take from nature. Like it or not, we all take from nature. The important thing is for us to know our limits. That’s why I pursued a different option and convinced the regent of Katingan Regency to establish Tumbang Habangoi village and its surroundings as a conservation area. That’s the least we can do to protect our village.” 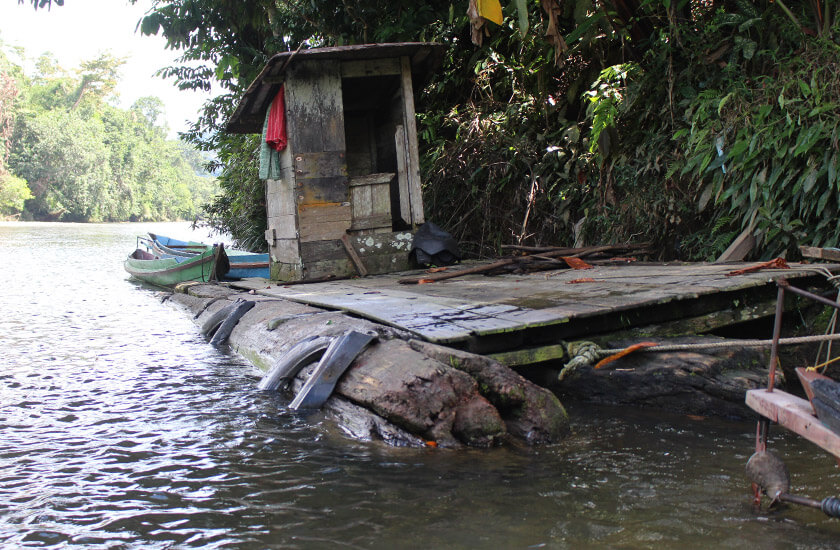 A floating platform known as lating, where villagers carry out daily activities, from bathing in the river to washing clothes and dishes. Photo: Ranu Welum, 2017 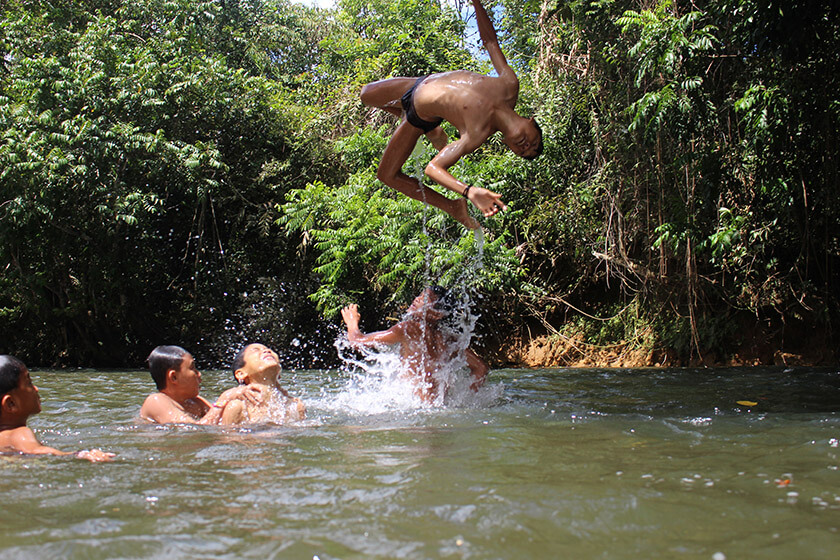 The river is one of the favorite places for the village kids to swim and play. Photo: Ranu Welum, 2017 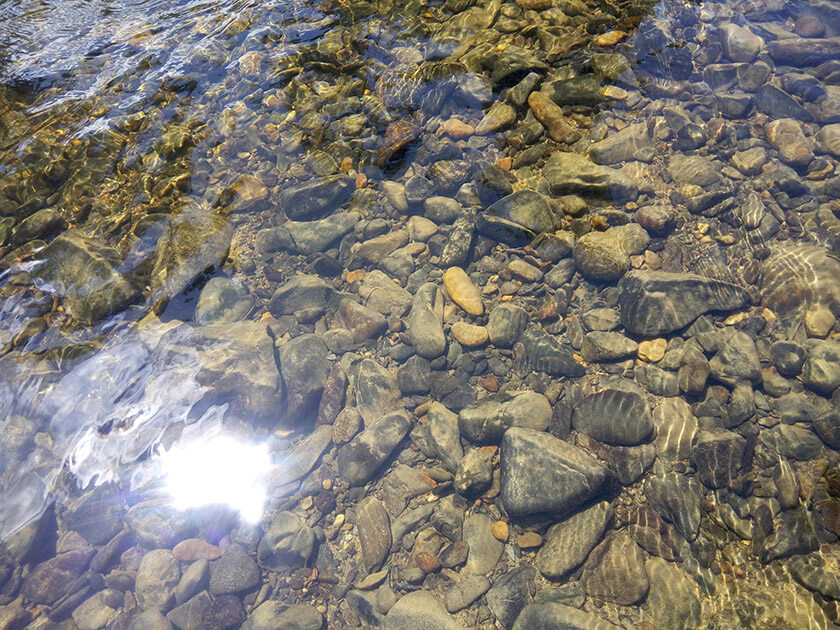 Before having piped water from a small river in the hills, villagers would use water directly from the Bahangoi River for cooking and drinking. Photo: Ranu Welum, 2017

Hearing that, I was relieved, yet I still felt worried. I worried about my village, the people there, my family, the forest, the animals that diminish day by day. I worried because we are very dependent on the forest and its resources. Everything we need was provided by the forest, and I feared that someday we would no longer be able to enjoy the abundance of the forest or hunt and fish freely, take the wood, or plant the rice on the land that we believe to be ours. I worried that in the near future my people would live in poverty and become strangers in our very own land, a place we used to know as our home. I worried that we wouldn’t survive the change that has been invading our community. I started to think: what can I do to change the situation, or at least to prepare myself and my family for the worst?

My campaigns were not what my villagers needed. We needed a plan that would help us endure for the long term, help us villagers to adapt and prepare for change—and not only to survive it but also to overcome it.

At first, I thought that I would yell and scream, telling people to stop taking the trees away or dig out the gold, or telling the government to be fair to Indigenous people. I joined organizations that worked closely with Indigenous communities in Central Kalimantan. I started as a volunteer, made films, wrote articles, and did a social media campaign to raise awareness about deforestation and what we can do to prevent it or slow it down. I talked about the situation of Indigenous people in my homeland to everyone I met. But then I realized that what I was doing wasn’t enough. My campaigns were not what my villagers needed. We needed a plan that would help us endure for the long term, help us villagers to adapt and prepare for change—and not only to survive it but also to overcome it. I became convinced that the best way to overcome the destructive effects of the change and of our community’s lifestyle shift from a traditional to a modern society—which I knew we weren’t yet ready for—was through education. That’s when I became a volunteer teacher in the Uut Danum Youth Community in Palangka Raya, where I now live and work as a teacher.

Each of us has a different way to fight against extinction, whether it is the extinction of our nature, our homeland, our culture, our languages, or our customs. 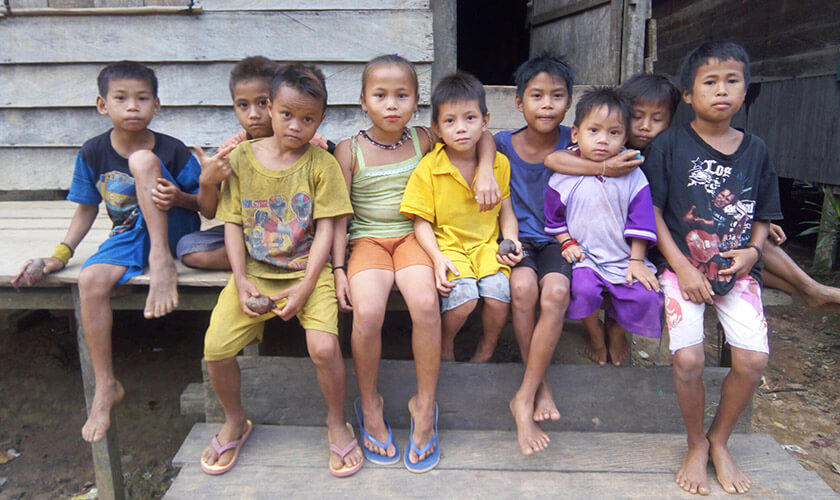 Families in the village are very close, and so are the kids. Photo: Ranu Welum, 2019

I realized that, before I’m able to help others, I have to help myself. Before I can educate others, I need to educate myself with proper knowledge and understanding. Before I’m able to empower others, I need to empower myself. That’s how I was able to survive moving from my village to a small city in Central Kalimantan to pursue my education so that at some point I may go back and help others in my village. I dream that someday I will be back in my community to build a library and training center to educate and empower young people there. Since writing is one of the things I am capable of doing and am able to do, I plan to write down the stories and customs of my community, as a heritage for the younger generation when the Elders are no longer there to share their wisdom. As one of my efforts to preserve our culture and language, I started recording and writing the folk stories from the Elders in my village. That way they will not vanish and leave the younger generation without knowing their roots and history. 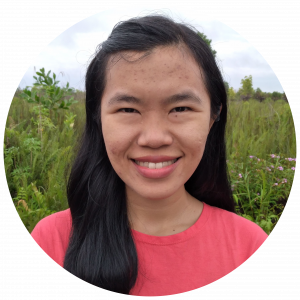 Lina A. Karolin is an elementary school teacher in Palangka Raya, the capital of Central Kalimantan Province. She is a young Indigenous woman from the Dohoi people, a subethnic group of the Uut Danum Indigenous Dayaks in Borneo, Indonesia. She dreams of someday building a library and training center in her village.