Learning to Write Our Native Language: The Nepalbhasa Ranjana Script of Nepal

We are Newars, the Indigenous people of the Kathmandu Valley in Nepal. We are worshippers in the Hindu and Buddhist traditions and belong to several different ethnic groups, but historically we all spoke a common language, Nepalbhasa. While the language is prevalent among the older folks, most of the youth are unable to read or write it, though those of us in the younger generation want to learn the language. One of the ways we are tackling the problem is by organizing a series of Callijatra, a combination workshop–festival where participants learn about and celebrate the beauty of Ranjana, one of the major scripts used to write Nepalbhasa.

We organized workshop–festivals where participants learn about and celebrate the beauty of Ranjana, one of the major scripts used to write Nepalbhasa. During Newar festivals, the whole valley is decorated with mandalas and writings in Ranjana script.

The three major scripts of Nepalbhasa — Nepal, Bhujimol, and Ranjana — are believed to be derived from Brahmi lipi (or “script”). The Ranjana script is ornate as well as artistic and is visually pleasing. Its origin can be traced back to Buddhist texts of ancient times, inscriptions of mantra (an utterance of religious significance), and hymns. 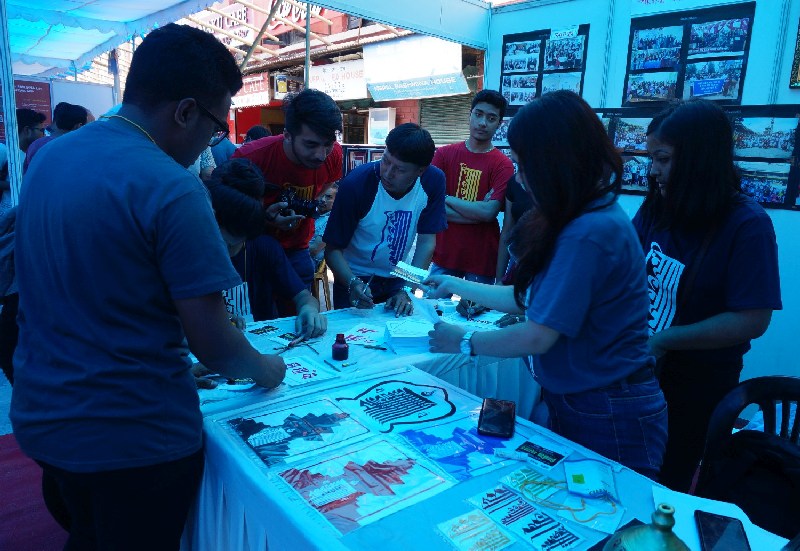 Callijatra (jatra meaning festival) started as a workshop movement on social media that gained a lot of positive feedback. The online-promoted events were open to the public and attracted 4000+ participants with a total of twenty-two workshops conducted. We participated in a one-day workshop where we were introduced to the teaching materials and what we would learn. We learned the basics of the language in the following month. We were taught to relate the Ranjana script to human body parts (head, neck, body, mouth, hand) and how to reproduce the alphabet. The instructors had ingenious ways of making the brushes used in Ranjana calligraphy, where even such things as bamboo sticks cut at an angle or cut metal-tip pens were used to make do-it-yourself pens. The course included teaching us how to write a Kutakshar (monogram). This is a special form of Ranjanascript used to hide secret information in ancient times. The letters are joined vertically, one after another, which makes it difficult to read. At the same time, it is a challenge to decipher the word itself as there are various overlapping interpretations of each individual letter. Mantras in the temples can be found written in Kutakshar, as can the names of occasions during festivals.

During Newari festivals, the whole valley is decorated with mandalas and writings in Ranjana script. During Nhu Daya Bhintuna (the Newah New Year), people participate in rallies wearing traditional costumes and shirts with symbols and phrases reflecting ethnic pride.

The classes we participated in took place in the Thecho community, where the government collaborated with a local school (Thecho Newa English School) to conduct the month-long class. The one-day workshops were organized by the Institute of Nepal Epigraphy in collaboration with local Newar communities. For their part, the local communities sponsored the materials by which people could learn to write the script, and the institute provided teachers who conducted the workshop. People from various walks of life came together in a month-long class. They were there to know more about their ancestral language, gain additional skills, and understand how to pass what they learned to the next generation. There were assignments to do every day and the course was engaging as well as rewarding. In the end, we did an assessment to see how well we had retained the skills we were taught. 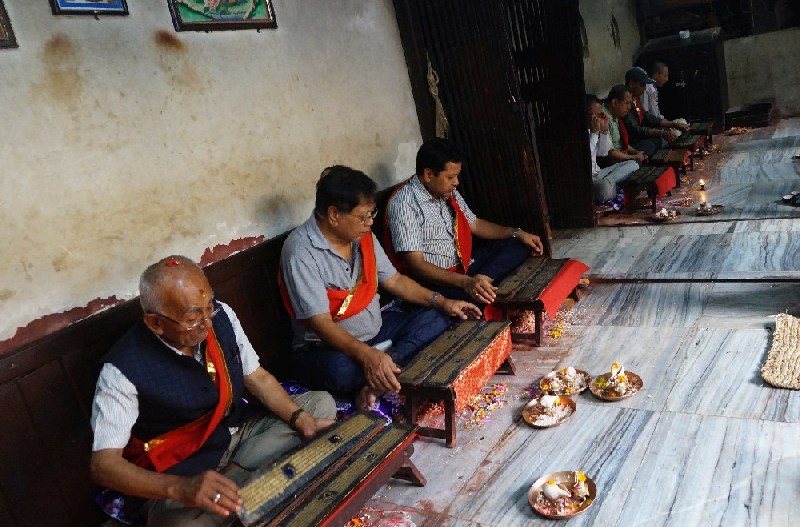 We spoke about Callijatra to Shashank Shrestha, a man who has documented these workshops. He pointed out that Nepal became unified in the 1960s with a “one nation, one language” policy that was the beginning of decline for Nepalbhasa as well as other regional dialects. He believes Ranjana script should be taught to all cultures because it is appealing from a design perspective. This whole stream of information and skill sharing was initiated by a man named Ananda Maharjan. He is a graphic designer by profession. He realized that Newar youth have an information gap when it comes to their own language. Maharjan envisioned a space open to the general public as means of understanding his own heritage as well as reaching as many people as possible. The classes would happen outdoors, with the idea that locals passing by would become curious about such a horde of people doing calligraphy.

Maharjan is a font developer himself and has collaborated with Google to make the Ranjana script accessible to anyone who wants to reproduce it digitally. There are many technical challenges in making accurate scripts of Indigenous languages available on the Internet. When we spoke to Maharjan at the Ranjana and Nepal Lipi Art Festival, he displayed ten such scripts. He said that his team of 25 members have been working together to make a difference on such a big scale. Now there is a UNICODE font of Nepal lipi, which is the prevalent form of Nepalbhasa, available on Android 9.

There are many technical challenges in making accurate scripts of Indigenous languages available on the Internet.

It was uplifting to see participants come together to share their work in the Ranjana and Nepal Lipi Art Festival. There was a range of creative works on display made by participants of the workshop, friends and family. We could feel a sense of harmony and communal well-being among the people gathered there. Granted, there is pushback from some Newars who believe that learning the skills to write Ranjana script should be limited only to Newar families and not taught to the general public. But that is how languages die. 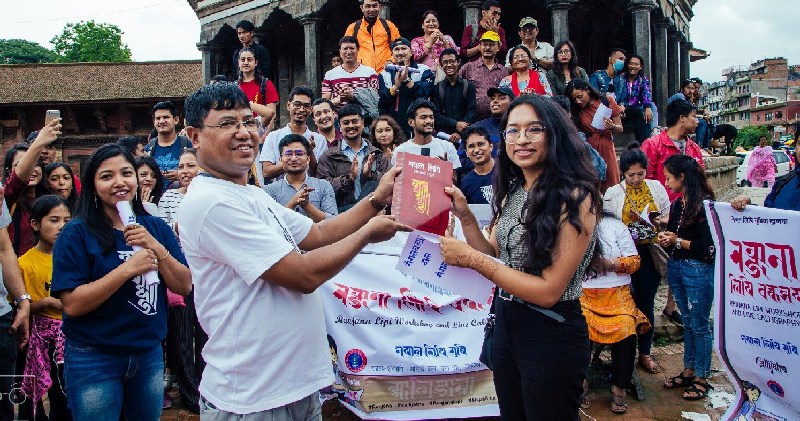 A student being awarded a book in Nepal Lipi for her exceptional performance in the workshop. Photo: Shashank Shrestha, 2019

Today, there are a range of resources to study Ranjana script. For example, after the conclusion of our classes, we visited Asa Safoo Kuthi (the Asa Archives) where books, articles, and manuscripts in Nepalbhasa are found. There is a collection of around 9,000 manuscripts in Nepalbhasa, and we were astonished to see how well it has been preserved. The archives are open to those curious to learn about Nepalbhasa and the various scripts.

It is a matter of pride to see one’s own name written in one’s native language. We believe parents should take the initiative to educate themselves and the next generation on how to write the script. Newah heritage is one of rich arts, crafts, and architecture, as attested by visitors to the cities in the Kathmandu Valley. Yet in Nepal, people of other cultures ridicule us for our Newar accent. English is prioritized over all other languages in the majority of schools in Kathmandu, and children in schools are penalized for speaking their native language.

It is a matter of pride to see one’s own name written in one’s native language. 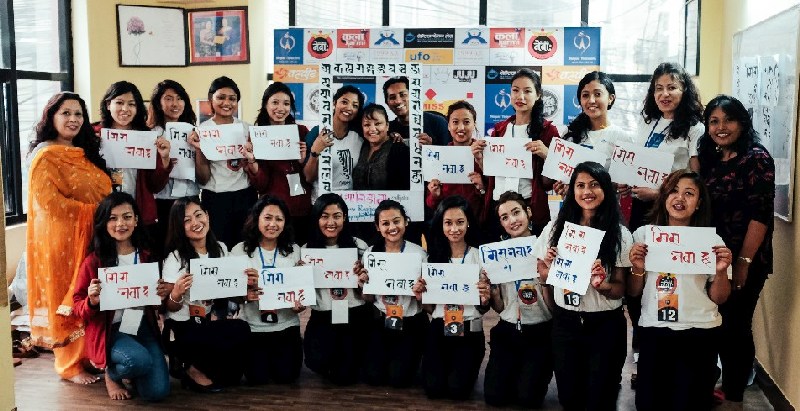 Youth-driven movements such as Callijatra are necessary to give people a way to connect with their heritage. Working with others in the community with our hands and ink was a great way to understand our past. The future of Nepalbhasa is now in the hands of people who adapt old cultural values to new stories, art, music, and films. In this age of technology, we should use it to its fullest potential to teach coming generations to preserve our heritage and identity. Language is ultimately a vehicle to drive social change, and the revival of such identity connects us with the deep traditions of our forbearers.

In this age of technology we should use it to its fullest potential to teach coming generations to preserve our heritage and identity. 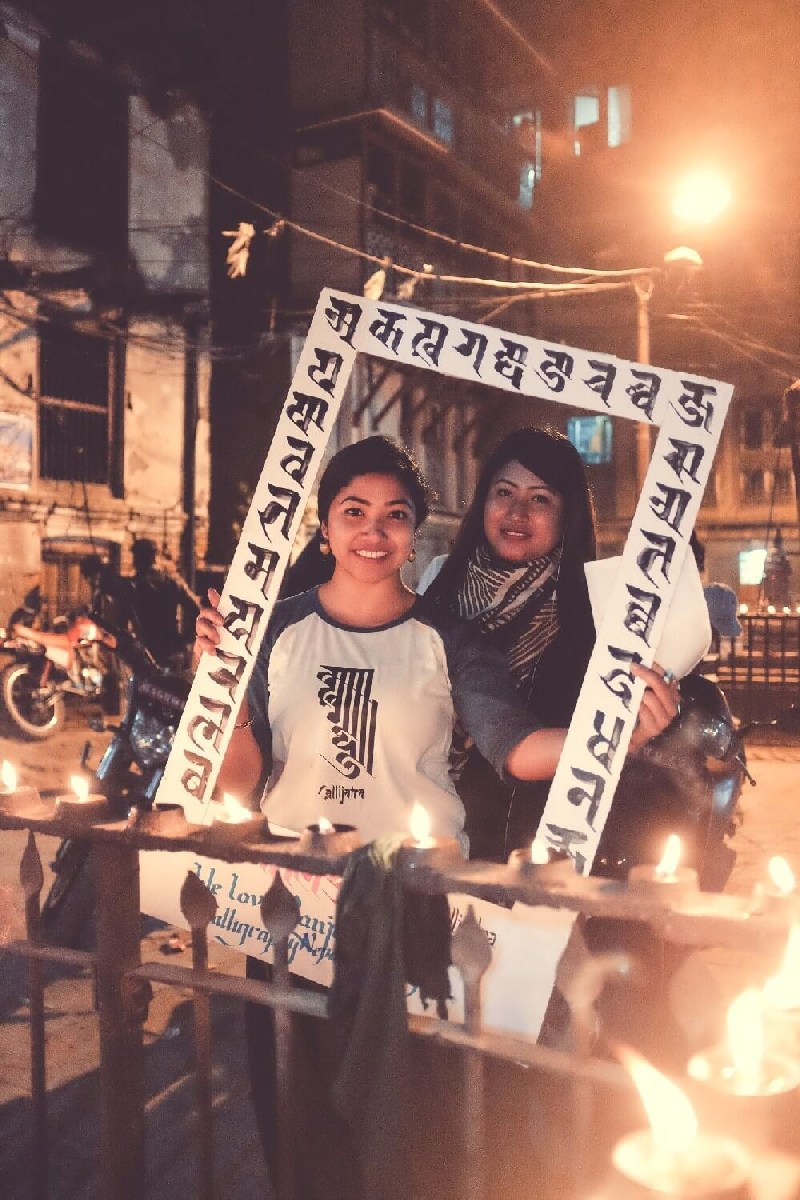 We appreciate the steps taken by Institute of Nepal Epigraphy to spread awareness about the importance of Ranjana script. We are grateful to the local government for organizing free classes, as well as for providing the materials required. Also, Ananda K. Maharjan, Sunita Dangol were integral in collecting information about the various scripts of Nepalbhasa. We are indebted to Shashank Shrestha and Dr. Sheetal Vaidya for photo documentation.

Manju Maharjan graduated from Tribhuvan University with an undergraduate degree in botany. She is a Newar from the Thecho community of Kathmandu Valley. She carried out research on the phytocultural knowledge of her home town during her undergraduate days. She previously co-authored a photo essay about Haku Chhoyala for Langscape. She took classes on the Ranjana script and finished on the top of her class. She is now taking part in various activities relating to Newah culture.

Yuvash Vaidya is a performing arts student doing the final year of his undergraduate degree in London, UK. He studied in KM Conservatory in Chennai, India, to complete his diploma in Western Classical performance. He won “Performer of the Year” in his first year there and was able to perform in various cities around India with different ensembles. He is a writer at heart and writes on the issues faced by Indigenous youth. He has taken classes on Ranjana script and is discovering the language.

The Indigenous Youth Storytellers Circle is recognized as an official project of the United Nations’ International Year of Indigenous Languages, so your story has the potential to reach a global audience. Read more stories from Indigenous Youth..