A young Ghanaian muses about his Indigenous identity, traditional values, and biocultural diversity. 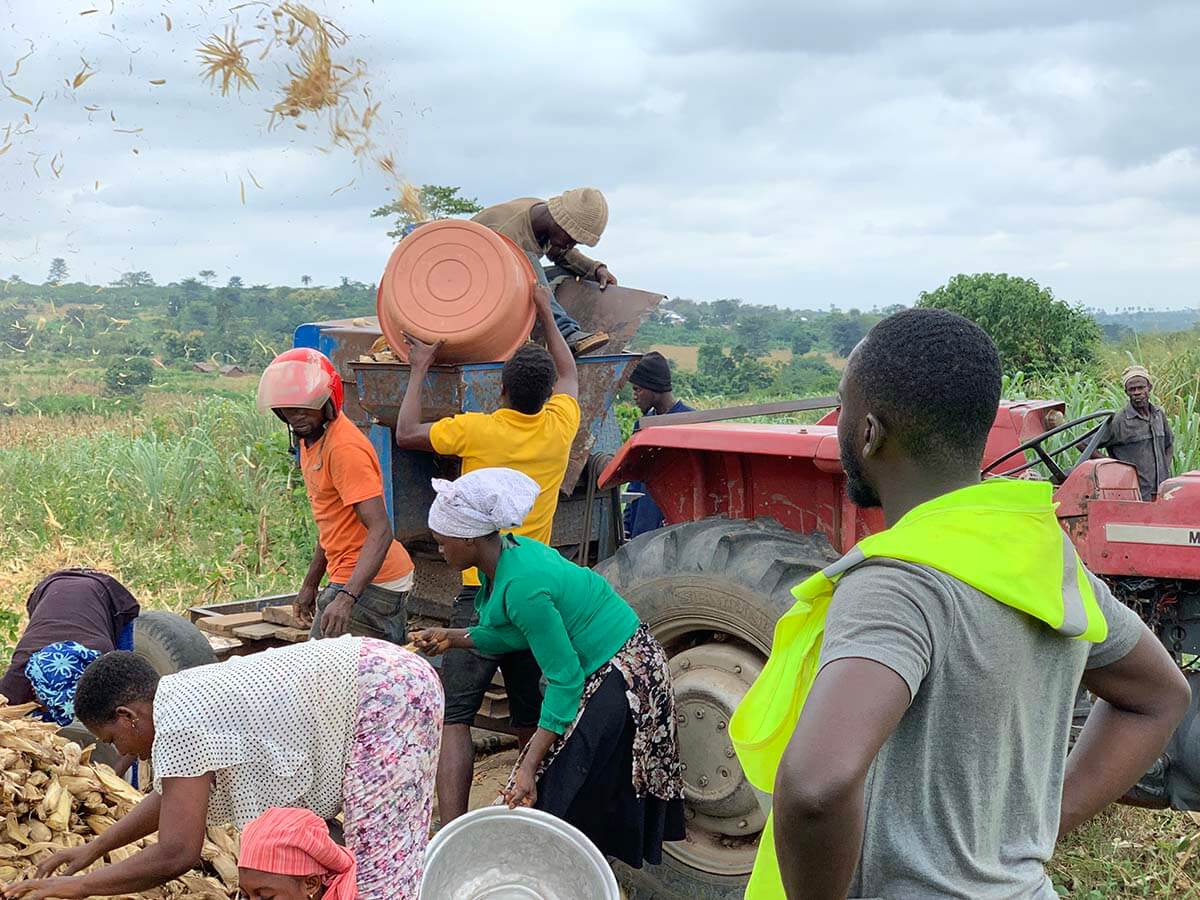 An active day at a maize farm in Kobreso, Offinso, North District in Kumasi in the Ashanti Region of Ghana. Farmer Asare Tieku oversees farming activities and assists the other farmers. Photo: Esther Odi Tieku

“Ouch!” I exclaimed, after hitting my pinkie toe against the leg of a table that stood idle in my path. I’d been busy brainstorming ideas for this piece, and while at it I paced the corridors of my apartment, only to collide with the table and have my little toe throb in pain. I had absolutely no business standing in the way of the table, nor did it have any business standing in mine. Oddly enough, however, that sudden painful moment had me limping into the realization of how I had lost it all.

In a typical Ghanaian setting — one I’m quite familiar with — I should have screamed “ajeii!” not “ouch!” Ajeii is a well-known exclamation in Ghana, used to express pain and even sometimes hurt or regret in those “had I only known” moments. Sadly, the many foreign English-language movies I’ve been watching have brainwashed all that Indigenous slang out of my mind and have led me to embrace what is now deemed to be the standard for social and cultural practice. The scripted scenes that I feasted my eyes and mind on have also made me favor English or Christian names over unique local names such as Yaw (a Thursday born), Akua (a Wednesday born), or Kwabena (a Tuesday born). Now, all I wish for is to raise my children somewhere in the global West and give them names like Anderson, Brittney, Tiffany, Marsai, and so on.

But all that is just scratching the surface of my stark realization. 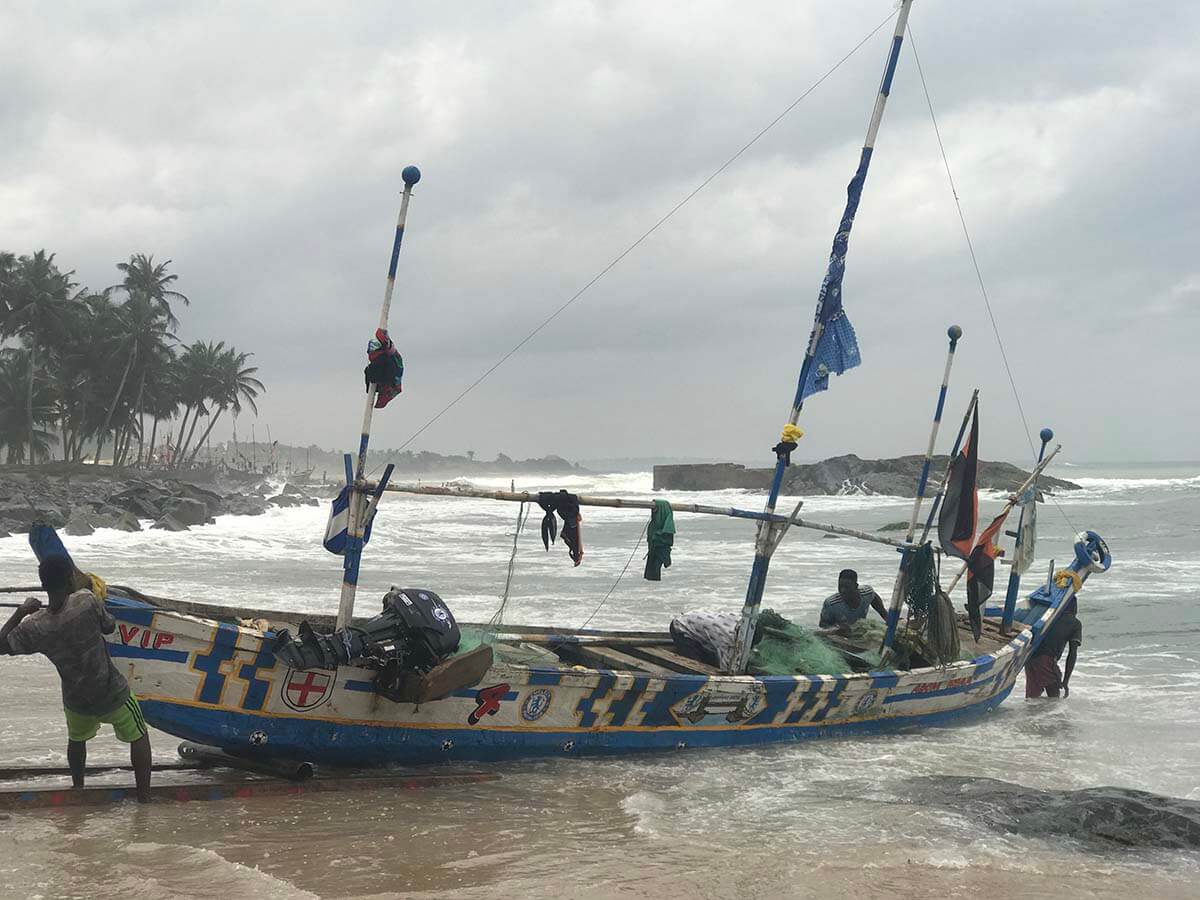 Except on Tuesdays, you would usually find fishermen at the Central Region, Saltpond, Ghana, getting busy ahead of their fishing chores. There were also taboos that monitored abusive fishing practices and preserved aquatic life. Photo: Esther Odi Tieku

While I searched for some ointment to rub over my throbbing toe and ease my pain, it occurred to me that what I had lost was much deeper than that. I had inadvertently absorbed a habit of utter disregard for my own culture, especially the intangible bit that includes my beliefs, traditions, and values. In fact, my physical environment was being affected, and not so much in a good way. I had lost reverence and respect for my own culture and the culture of other ethnicities in my country. And for that matter, certain social, cultural, and environmental ills were being visited on me as “rewards” for my contribution to the dramatic decline of natural and cultural richness.

In Ghana, many Indigenous communities have been able to secure and preserve terrestrial and aquatic wildlife with the help of existing taboos passed on from our ancestors.

In Ghana, many Indigenous communities have been able to secure and preserve terrestrial and aquatic wildlife with the help of existing taboos passed on from our ancestors. On Tuesdays, it is forbidden to go fishing at sea. It is believed that we must allow for the aquatic creatures to reproduce or rejuvenate. Also, fishing at night is prohibited because the sea gods and goddesses stay active at night to protect the water bodies. Again, Thursdays are reserved as hunting-free days, and farming is prohibited on Fridays so as to allow the gods of the land to rest. These taboos were initiated by our forefathers in an attempt to preserve the ecosystem. Humans often have a tendency to abuse freedom, so it was important for our ancestors to limit that freedom to prevent the abuse — even though they usually achieved that result by instilling fear of the deadly consequences that the spirits would inflict on community members if they broke the taboos. 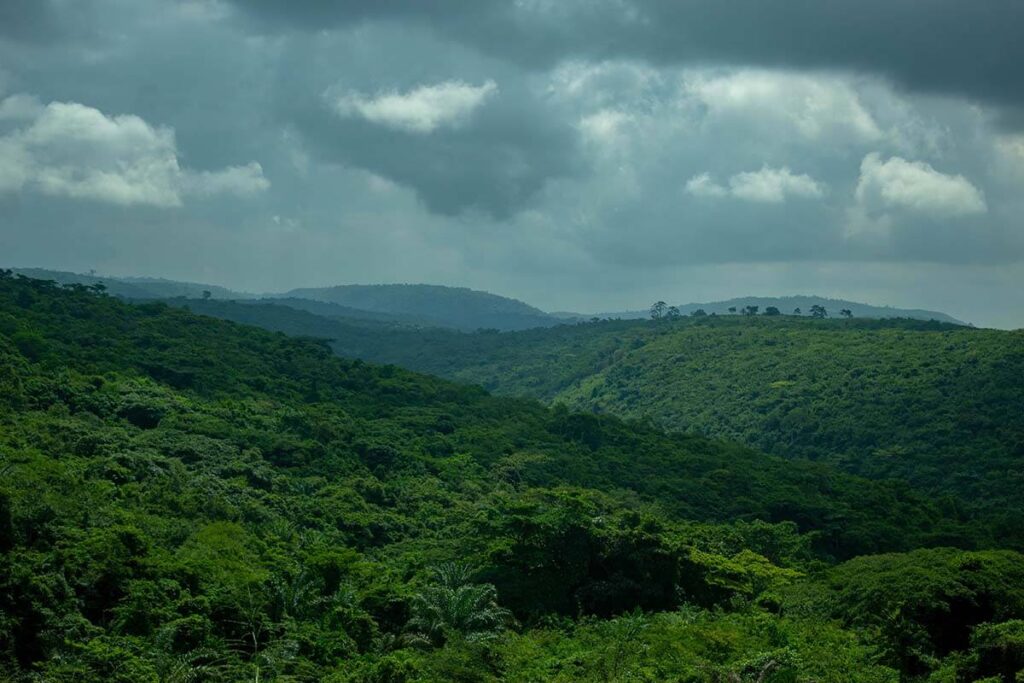 What a forest in the Northern Region of Ghana looks like on a hunt-free day—typically on Thursdays. Photo: Benebiankie/Wikimedia Commons

Unfortunately, these Indigenous beliefs are no longer thought to be as relevant as they used to be. Thanks to the omnipresence of globalization, only a handful of Indigenous communities in Ghana stick to the taboos and other traditional laws meant to safeguard the environment. In recent times, our culture has been diluted. The so-called innovators in society have been discrediting lots of beliefs and traditions with excuses such as “Times have changed” and “Our ancestors were just trying to scare us.” Now, only the “laggards” and “late majority” groups in society hold on to these and other traditions. Their hesitance to adapt to a changing social environment and adopt the budding lifestyles of urban people makes it a lot easier for them to keep to deep-rooted preservation of habits that have done well for them over the years.

The youth, on the other hand, would rather approve of the colonizer’s mindset and way of life and allow their blatant disregard for our culture to affect our biodiversity. Sadly again, I’m one of those who contribute to this decline. I’d rather we celebrate Halloween than the Dipo and Odwira festivals of Ghana, speak English with the white man’s accent, and discard whatever belief or traditional value that tells us how and what to eat, drink, wear, or think about. Simply put, if it isn’t Caucasian, it’s not attractive. Such a fickle mindset!

Our cultural behaviors needed to be altered so we wouldn’t feel apart from the rest of the world — well, so I thought. But now, thinking through all of this has made me realize that this is the same mentality and spirit that has led to a global pandemic, biodiversity loss, racism, discrimination of Indigenous people or, in this case, of my own people. And to the gradual pulverization of our unique culture. This was evident in my poor understanding of biocultural diversity and its salience. 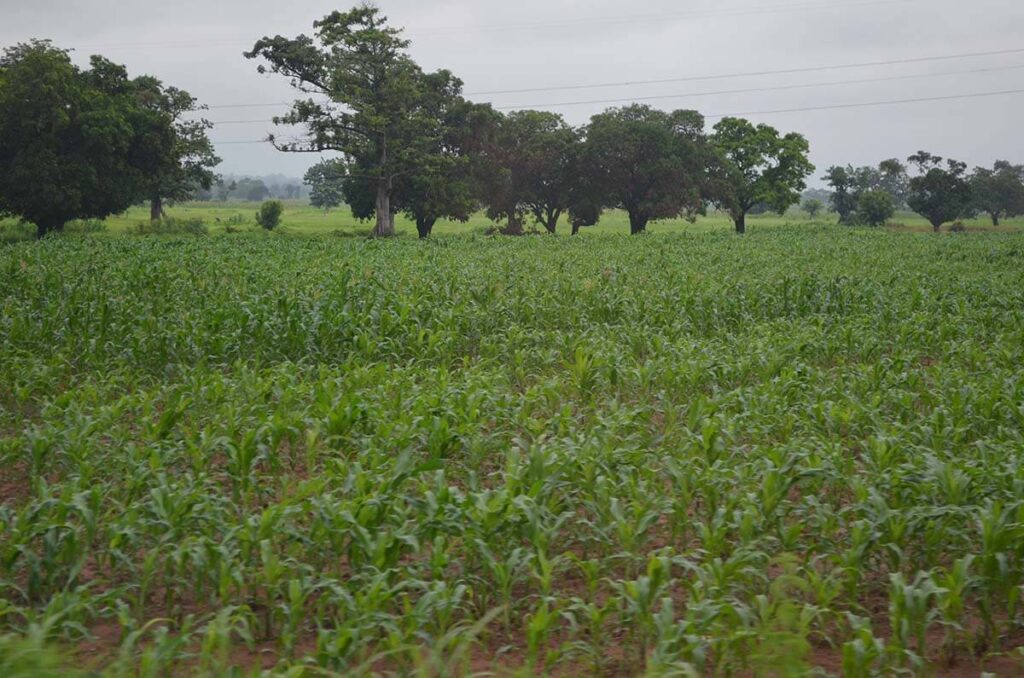 A typical Friday in Ghana, when farming activities are prohibited, allowing the gods of the land to have a rest. This was a way of reducing excessive farming activities that might harm the land. Photo: Ibn Shiraz/Wikimedia Commons

Who’d have thought that a stub on my toe would open up my mind to so much and at the same time expose my ignorance? I’m quite certain that a lot of you, young ones especially, reading this can relate one way or the other to an experience such as mine. We ought to do better. Modernity shouldn’t be an excuse for us to disregard our Indigenous principles.

Modernity shouldn’t be an excuse for us to disregard our Indigenous principles.

The basis on which biocultural diversity can thrive greatly depends on principles of reverence, respect, and reciprocity. These three “Rs” are intrinsically pertinent to our embrace of biodiversity and deep regard for various ethnicities and their cultures. In effect, we can avoid inflicting harm to our ecosystems and still keep adapting to new ways of life that benefit our socioeconomic and cultural development. We can also learn to harmonize traditions, values, rules, and regulations with our evolving environments, and serve as an example for others to do the same. One important thing to realize is that, when we are intentional in our efforts to keep to natural laws and put our minds to the preservation of our cultures (both material and immaterial), we not only reconcile and appreciate our differences but also, correspondingly, enjoy the rich cultural and natural benefits. 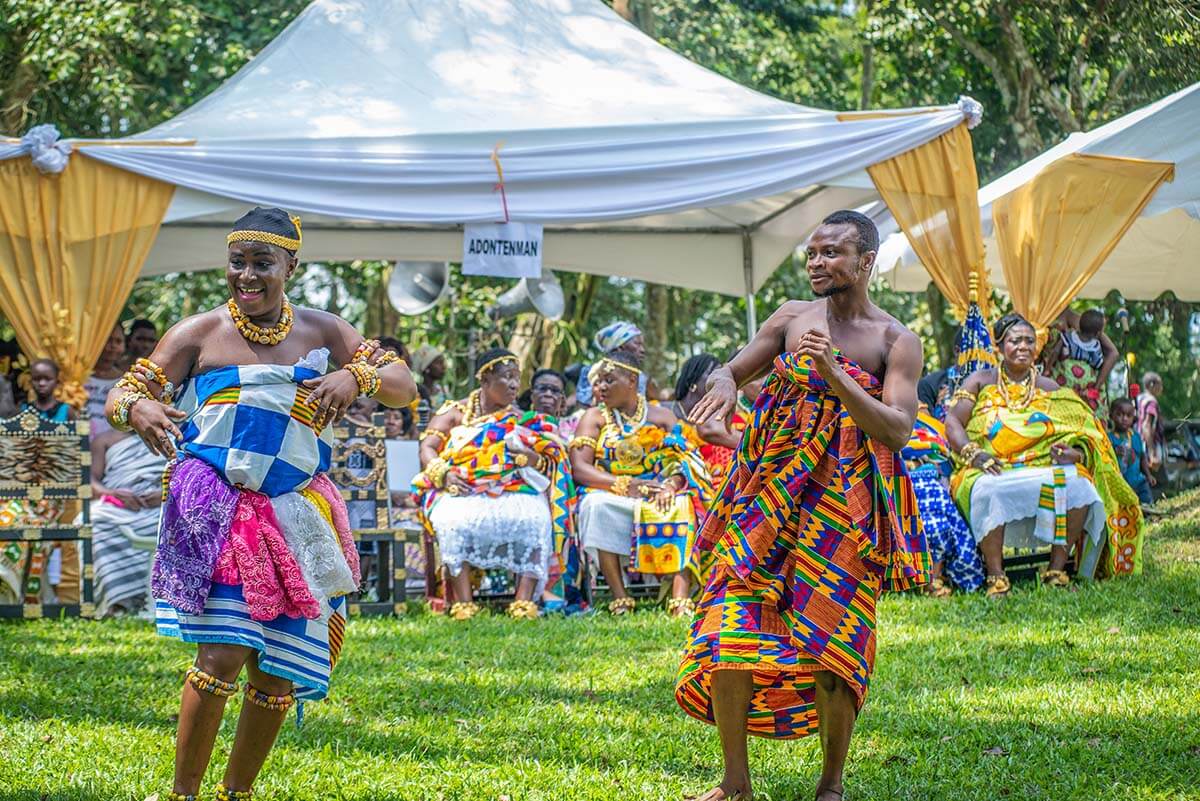 A typical Akan cultural event, featuring chiefs and queen mothers present at a function, with dancers performing the Adowa dance, which is popular in Akan communities. The Adowa dance is also usually performed during the Odwira festival, celebrated in September and October by Akropong-Akuapem, Aburi, Larteh, and Mamfi people in the Eastern Region of Ghana. Photo: Yaayi/Shutterstock

In addition, we must learn and appreciate the defining roles our unique and distinct languages, festivals, traditions, beliefs, and values play in our world. The interactions of our diversities are exactly what we need to bridge the gap between culture and our natural environment. That said, biocultural richness can only be enhanced to its maximum when we make the deliberate effort to educate ourselves about the harm we mete out when we ignore our Indigenous principles, the benefits we reap from giving reverence to biocultural diversity, and above all, the way forward to sustain biocultural diversity in all its elements. 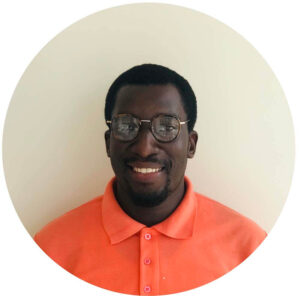 Abraham Ofori-Henaku is a multitalented young Ghanaian with an urge to flex his creative muscle in the art of writing. He currently holds a bachelor’s degree in Communication Studies from the Ghana Institute of Journalism and has developed a keen interest in areas of the arts, entertainment, and sociocultural events.