Our Children Are Our Hope and Future: Reflections of a W̱SÁNEĆ Language Apprentice Turned Language Immersion Teacher

It was one of those stubbornly-not-yet-summer early June days on Salt Spring Island, British Columbia, on the west coast of Canada, eight years ago. The sky was overcast and the air cool, but that seemed to be no deterrent to the small group of campers who had pitched their tents on a beautiful, secluded beach on the south end of the island. Everybody was keeping busy. Children playing. Some of the young adults tending the campfire on which the food being readied by some of the others would soon be roasting—the smoke that rose from the fire seeming to magically mingle with the ethereal sounds of a flute played by one of the campers. In the background, sitting on a log that had drifted onto the beach, an Elder intensely absorbed in turning strips of bark into the structure of a traditional fish trap. 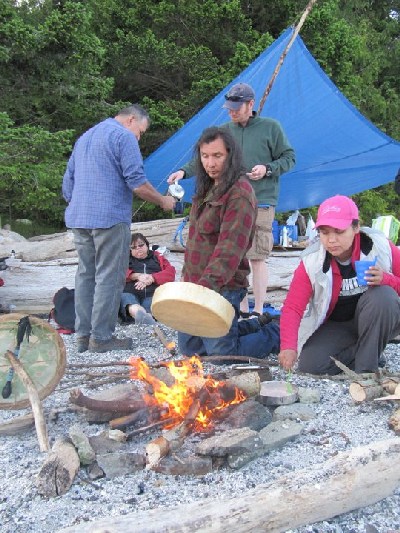 That was the scene that greeted me as I stepped onto the beach on that day of 2011, an invited guest of the intergenerational contingent from the W̱SÁNEĆ First Nation who had come to what is known to them as W̱ENNÁNEĆ, a part of their traditional territory, for a language-and-culture immersion weekend. Salt Spring/W̱ENNÁNEĆ is also where I live and where Terralingua operates. I was there as a guest because Terralingua had just started collaborating with the W̱SÁNEĆ on one of their language revitalization projects. We were supporting the first cohort of W̱SÁNEĆ Language Apprentices in their effort to document some of their traditional stories and turn them into storybooks illustrated by themselves, which would then be shared with the community.

The gathering of Apprentices and Elders on the land at W̱ENNÁNEĆ was another facet of the amazing work the W̱SÁNEĆ were engaging in to rebuild the intergenerational transmission of their language and cultural traditions. It was a privilege to share a meal and a few light moments with them in that serene, almost timeless setting. After we ate, the same Elder, STOLȻEȽ (John Elliott), began to sing to the rhythmic beat of his drum, soon capturing the rapturous attention of his two granddaughters, who were among the children frolicking on the beach.

SX̱EDŦELISIYE (Renee Sampson) was one of the Language Apprentices partaking in the gathering, and the two girls were the oldest of her three daughters. The following year, we asked her and four other Apprentices to share with us their thoughts about their experience as language learners and trainees preparing to teach the language to younger generations of W̱SÁNEĆ. We shared their message in the Spring 2012 issue of Langscape Magazine (Vol. 2.10), in a piece titled “Language Stories of the SENĆOŦEN Language Apprentices.” 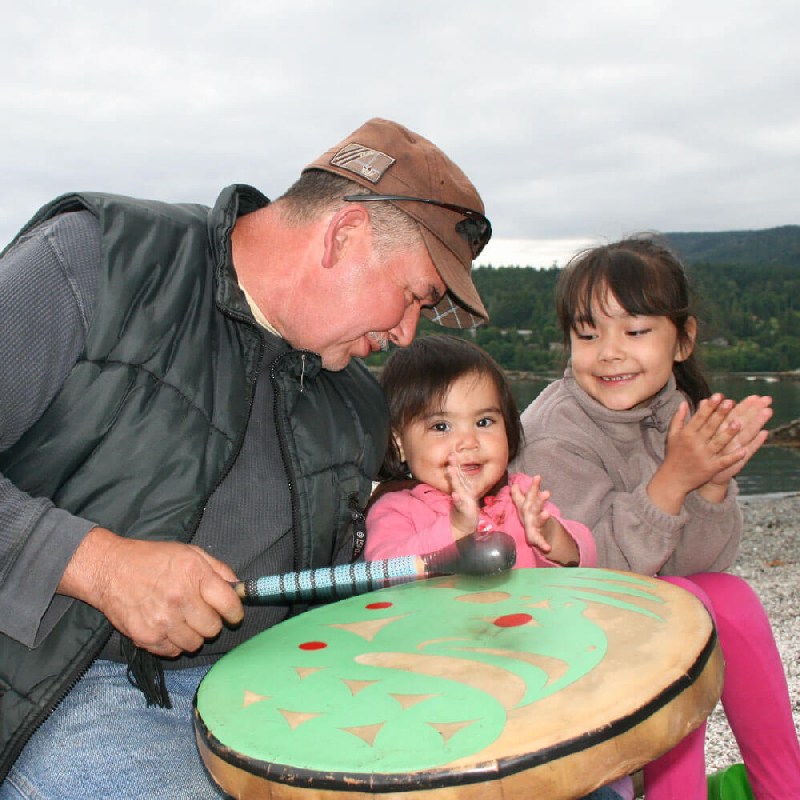 Now fast forward to June 2019 and shift the setting to Victoria, the capital of British Columbia. That’s where I attend the HELISET TŦE SḰÁL “Let the Languages Live” conference (June 24–26, 2019), an international gathering of Indigenous Peoples to celebrate the 2019 International Year of Indigenous Languages. And that’s where, at one of the sessions, I see SX̱EDŦELISIYE and one of the other (now former) Apprentices, PENÁĆ (David Underwood), again. My eyes fill with tears when I hear them fluidly speak to each other in their own language, SENĆOŦEN. What they were endeavoring, indeed struggling, to accomplish back in 2011 has now become a reality, and they’re now teaching the language to the next generation.

I decided there and then to ask them whether they would write a 2019 update on what they had to say seven years earlier, which we would then publish along with their original text from 2012. SX̱EDŦELISIYE agreed. What you’ll find below is a slightly edited version of her 2012 words from Langscape Magazine Vol. 2.10, followed by her 2019 reflections. Together, the two pieces give an inspiring perspective on the road that SX̱EDŦELISIYE has traveled in her passionate journey from Language Apprentice to Language Immersion Teacher, reconnecting to her ancestors to become a conduit of her language and culture for the children—as she puts it, her people’s “hope and future.”

My three daughters TOLISIYE, LIQIŦIÁ, and ŦE,ILIYE were given SENĆOŦEN SNÁs (names) by their SILE STOLȻEȽ (Grandfather John). Using SENĆOŦEN names as their legal first names was a statement: we wanted to instil in our children to be proud of being W̱SÁNEĆ. Their names connect to the land (LIQI: “waterlily”), sea (TOL: “out at sea”), and W̱SÁNEĆ virtues (ŦE,IT: “truth”).

I want my children to have the opportunity that many of our people did not have, that I did not have, to hear our ancestral tongue in the home. I am learning SENĆOŦEN alongside my children, and I know there will be a time when they will surpass me in fluency. Using the language with my daughters has become a daily thing. Morning routines in our home are now in the language, and all my girls are now acknowledging me as TÁN (mom) and used to me ignoring them until they acknowledge me in SENĆOŦEN. 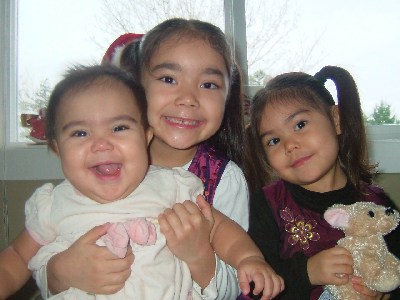 Our language nest is called SENĆOŦEN LE,NOṈET SCUL,ÁUTW̱ (SENĆOŦEN Survival School). It consists of eight students. It is a SENĆOŦEN immersion preschool/daycare. The curriculum is based on our W̱SÁNEĆ 13 ȽKÁLJ SĆELÁNEṈ (thirteen moons). The themes are culturally tied to our W̱SÁNEĆ beliefs, harvesting, and connections to land. The students are learning from a SENĆOŦEN perspective, and we are using the Dave Elliott SENĆOŦEN Alphabet. The students work on six different booklets that introduce colors, numeracy, shapes, SENĆOŦEN alphabet practice, names, and family and community.

Parents are required to sign a contract that they will commit themselves to learning the language alongside their child. Take-home parent kits are another way to get language into the home, and we are close to having this resource available to parents. These kits contain flash cards, labels, games, recipes, and many resources that parents can use in the home. 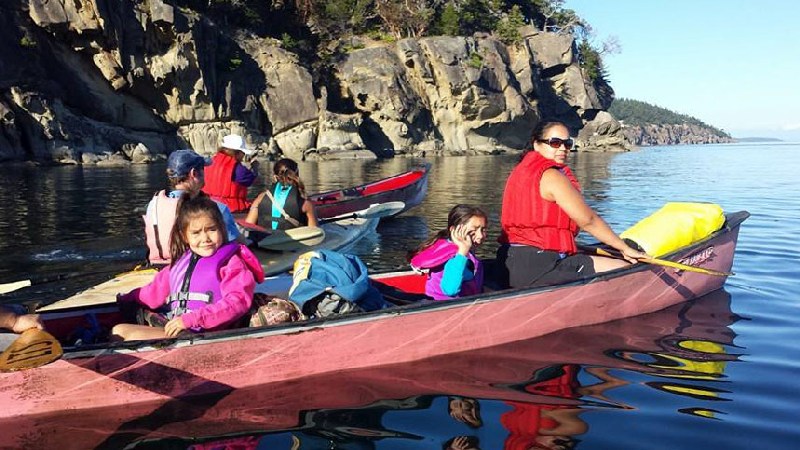 Also, we have Elders and language instructors come a couple of days a week to help us new language teachers with language fluency building.

Our language nest is so important, and we are trying to be creative to keep it sustainable. These children have learned so much in the three months (since we started the language nest), and these three- and four-year-olds are bringing language into their homes. Our language is still in a critical state, and we’re looking at different methods of revitalizing and keeping our language alive. Our children are our hope and future. 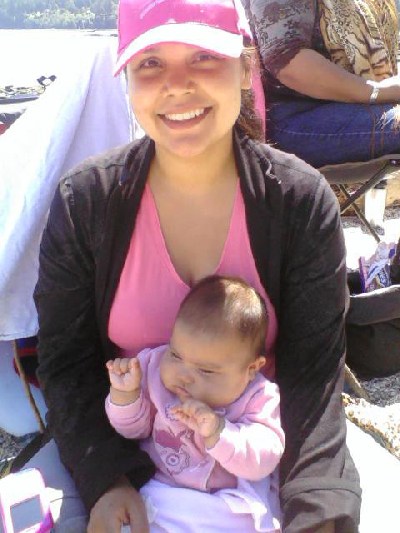 SX̱EDŦELISIYE visiting her ṮEṮÁĆES (relatives of the deep, islands in W̱SÁNEĆ territory), with her youngest SENĆOŦEN apprentice. Photo: SȾÁSEN, 2010

Good day. My name is SX̱EDŦELISIYE (Renee Sampson), and I come from the W̱SÁNEĆ Nation. I have been working at our SENĆOŦEN Survival School in Kindergarten for over six years and now at a K/1 class for two years. When I first met Luisa, my youngest daughter was a baby, and we were out on W̱ENNÁNEĆ (Salt Spring Island), which is part of our traditional territory. We were attempting to have an immersion weekend with our Elders, camping, singing, canoeing, and feasting. It was very difficult for me as a young language learner to stay in the language.

As I reflect back, my plate was full as I had three young daughters and was almost done with my undergraduate degree in education and about to embark on our newest initiative of starting our language nest. We began with eight students, and today those students are in Grade 6 in our bilingual program. My middle daughter was three when she started and now she is eleven. I have now completed my Masters in Indigenous Language Revitalization and am moving into the role of language coordinator of our LE,NOṈET Immersion School, which houses 94 students. We intend to continue our program to Grade 12 and are in the midst of developing our next five-year plan for our students.

The support from our community is tremendous. They are supporting our language initiative by enrolling their children or grandchildren in our immersion program. They are proud to see their children or grandchildren opening up with prayer in the home and in community gatherings, sharing songs and language. Having children speaking and using the language has not happened for two generations, and we are now seeing language being used once again in our villages.

The support from our community is tremendous. They are proud to see their children or grandchildren opening up with prayer in the home and in community gatherings, sharing songs and language.

For me, learning my ancestral language has changed my whole outlook on life and my worldview. I have a sense of belonging to my territory and my ancestors. I work hard to honor them and everything that they have left for us. 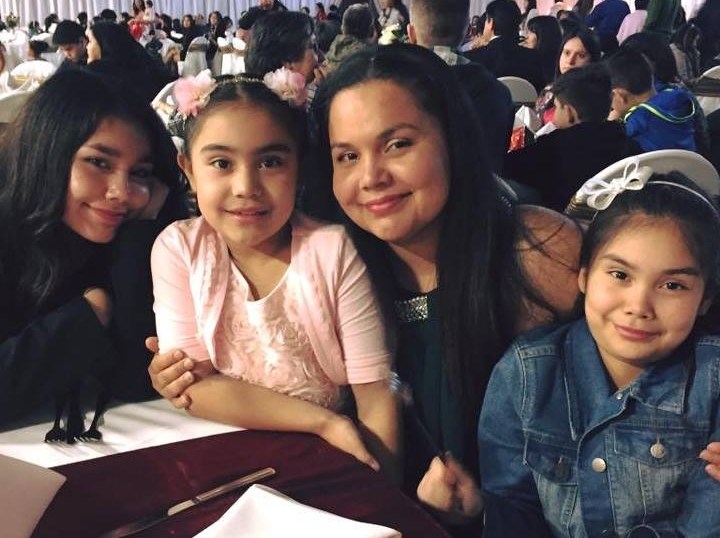 SX̱EDŦELISIYE hails from the W̱SÁNEĆ (Coast Salish) Nation, one of the First Peoples of what is now British Columbia, Canada. A proud mother of three daughters, she was one of the first participants in the W̱SÁNEĆ Language Apprentice program as a learner of her language, SENĆOŦEN, and as a trainee for teaching the language to younger generations. With a Masters in Indigenous Language Revitalization, SX̱EDŦELISIYE is now SENĆOŦEN Immersion teacher/language coordinator and a University of Victoria instructor.
.