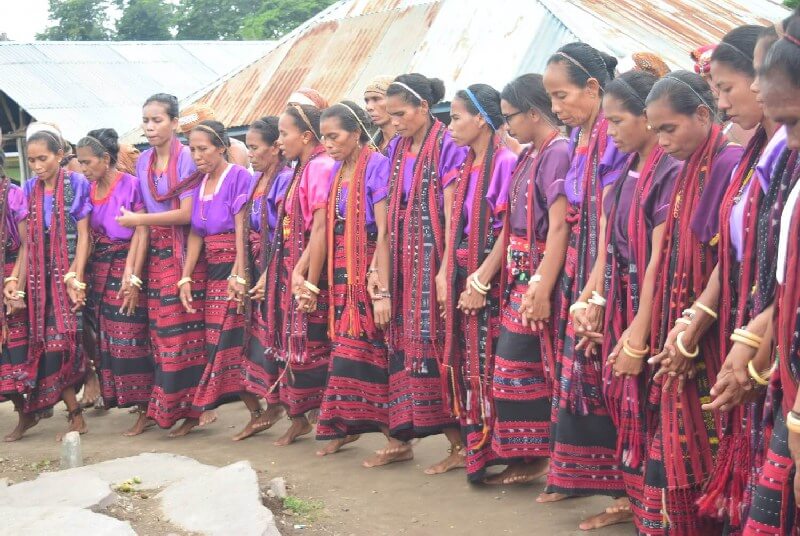 Women in Ko’a sing and dance before the buffalo is slaughtered. Photo: Donisisus Mastino Sera, 2019

Palu’e Island, locally called Nua Lu’a, is under the administrative region of Sikka Regency of Nusa Tenggara Timur Province of Indonesia. Palu’e is one of the subdistricts of Sikka Regency. Sara Lu’a is one of the local languages spoken by Palu’e people. Palu’e Island preserves a unique culture that includes our Sara Lu’a language, legend stories, traditional songs and dances, and traditional ceremonies. I went to Palu’e Island in December 2018 in hopes of attending the Pati Karapau, one of the traditional ceremonies held in the hamlet of Ko’a, which is part of Rokirole Village. 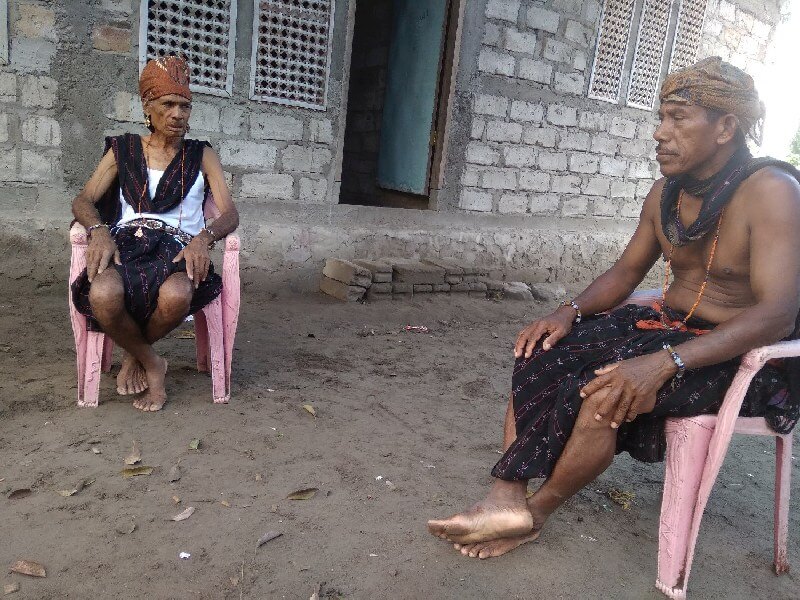 This traditional ceremony is usually performed every five years, closing an agricultural cycle. (Not all Tana, or domains, of Palu’e perform the Pati Karapau ceremony; those who do are called Tana Laja Karapau.)  It is the peak ceremony of thanksgiving rituals, acknowledging that the success of all work done during the previous five years is due to the greatness, grace, and blessings of the Era Wula Wathu Tana. The Era Wula Watu Tana is believed by the Palu’e people to be the highest, most powerful entity creating and giving life for humans. Era Wula refers to “the high power or local god,” and Watu Tana refers to “the ancestors and the earth.” The Palu’e people believe the Era Wula is the sun and the moon, and the Watu Tana are the land and the ancestors, and each must be given some food in any ceremony. Pati Karapau itself means “the sacrifice of buffalo.” In Ko’a, the buffalo is ranked as the sacrificial animal of the highest order. Although this is never explicitly stated, according to hada, or law, its blood is meant to serve as a replacement for the human blood in sacrifices. The buffalo that is sacrificed in this offering is a symbol or sign of thanks being given to the Era Wula Watu Tana. 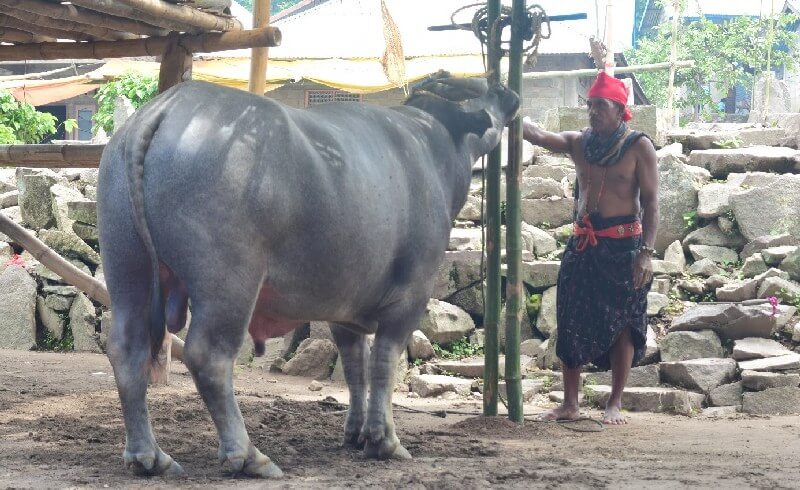 I went to Palu’e Island last December to meet the Ko’a Lakimosa, or the ceremony leader. The Lakimosa was really nice to me and gave me the schedule for the ceremony. I am really happy that the Lakimosa gave me permission to follow the ceremony, and in January 2019, I attended in the Pati Karapau ceremony. 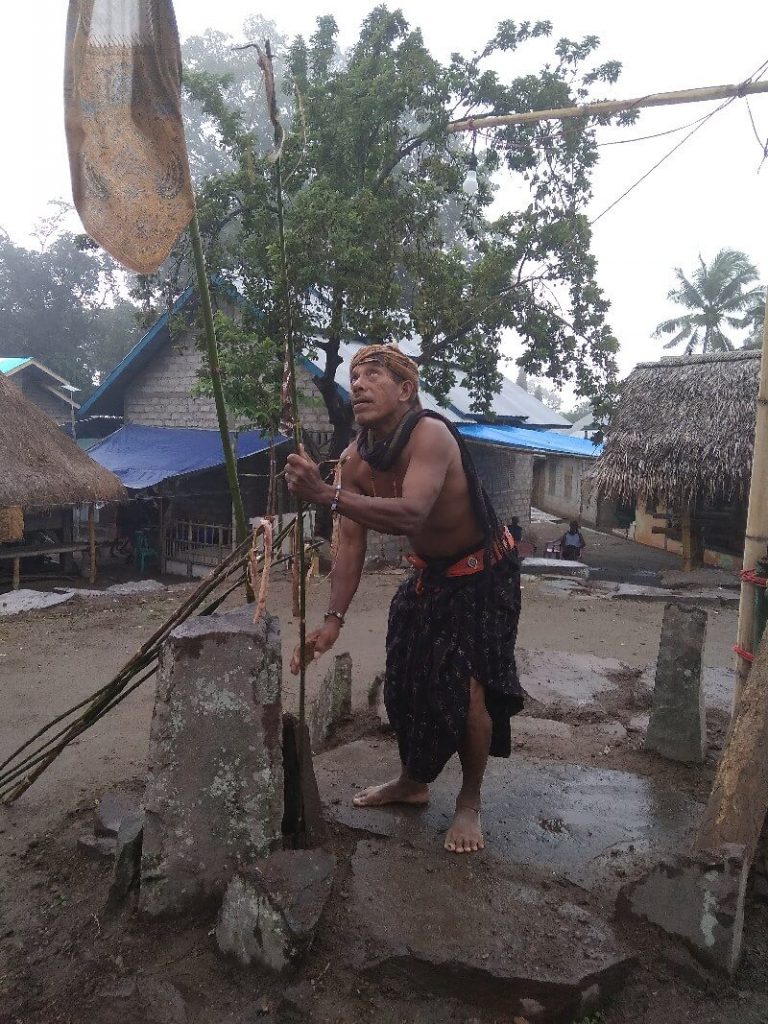 The Pati Karapau ceremony has many steps, the most important of which is a ritual called Phoka Pu’u Ca Supo Ngalu Lawa. In Phoka Pu’u Ca Supo Ngalu Lawa, I saw the buffalo slaughtered by the Lakimosa . Along with his son, he cut the neck and the back legs of the buffalo while dancing and chanting“Oro … e.” After the buffalo had been slaughtered as a sacrifice to the Era Wula Watu Tana, the Lakimosa put grass to the buffalo’s mouth and rice to its stomach to give thanks to the local god and to the ancestors. After the ceremony was done I went back to the city, but, as the Lakimosa told me, I learned that we must protect and care for our traditional culture. He let me record videos and take some pictures of the Pati Karapau ceremony as my part of my research and also as documentation for my generation so we will learn and know about the ceremony.

Traditional cultures like mine play an important role in civilization. They help strike a balance with Mother Nature and promote the conservation of nature and respect of each other. I learned a lot from this ceremony, especially from the way the Lakimosa, together with his people, carried it out. Togetherness is really important: when we have some event or ceremony, we need other people to make the ritual happen. I also learned how we as human beings must always be near the Creator that is God. In this ceremony, Palu’e people believe that we must respect and praise God as our Creator. 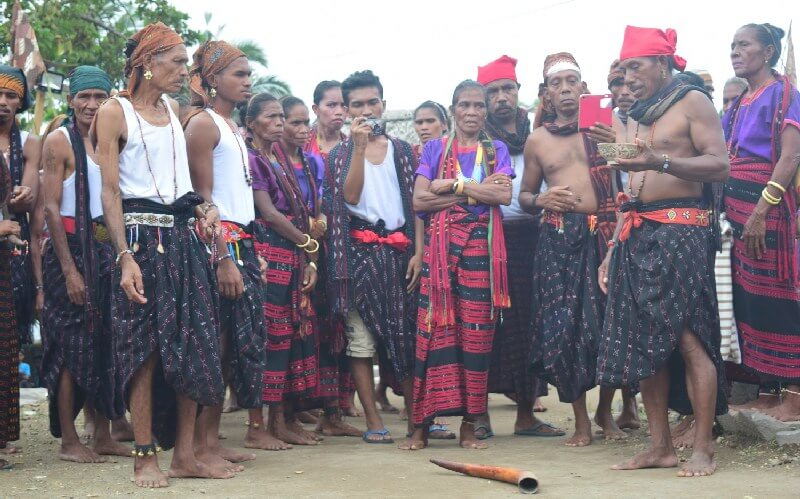 The Lakimosa and his son come to the Lakimosa Pati to be ready to perform and to slaughter the buffalo. Photo: Donisisus Mastino Sera, 2019 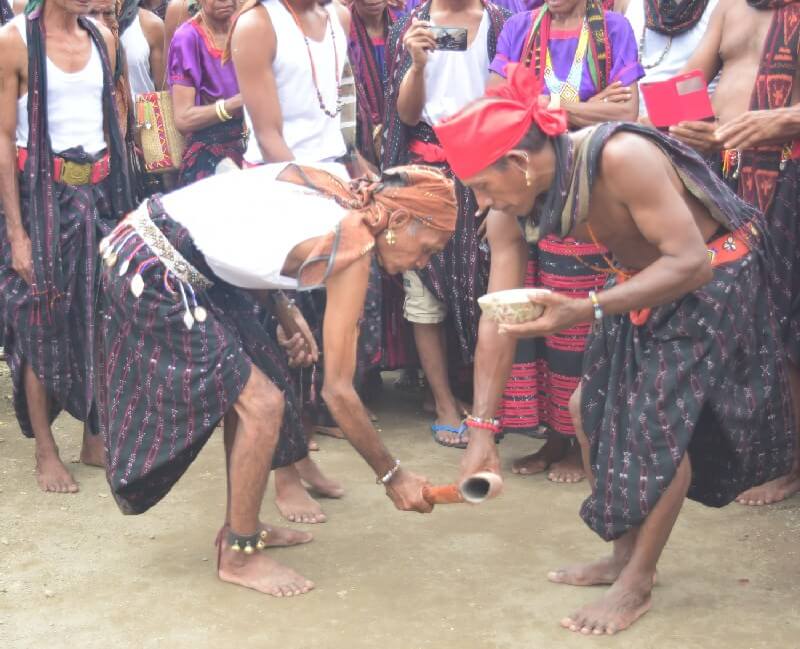 A ritual called Petha Lakimosa Pati must be performed before the Lakimosa slaughters the buffalo. Photo: Donisisus Mastino Sera, 2019 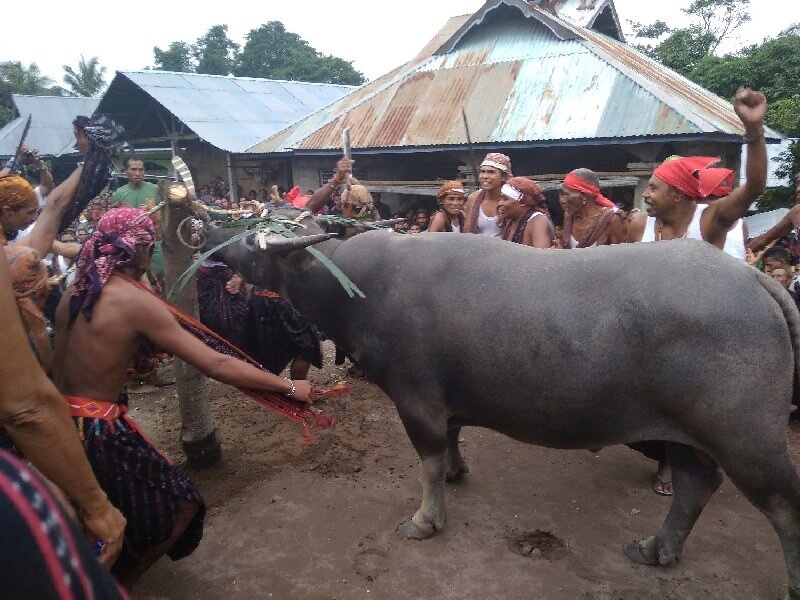 People dance while waiting for the Lakimosa to come to the Thupu, the place where the buffalo is slaughtered. Photo: Fauzi Bin Abdul Majid, 2019 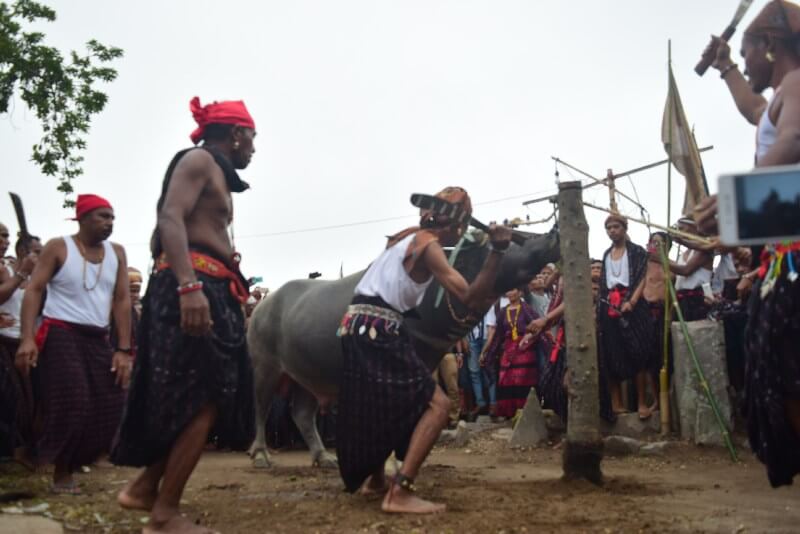 The buffalo must be slaughtered in front of many people. Photo: Donisisus Mastino Sera, 2019 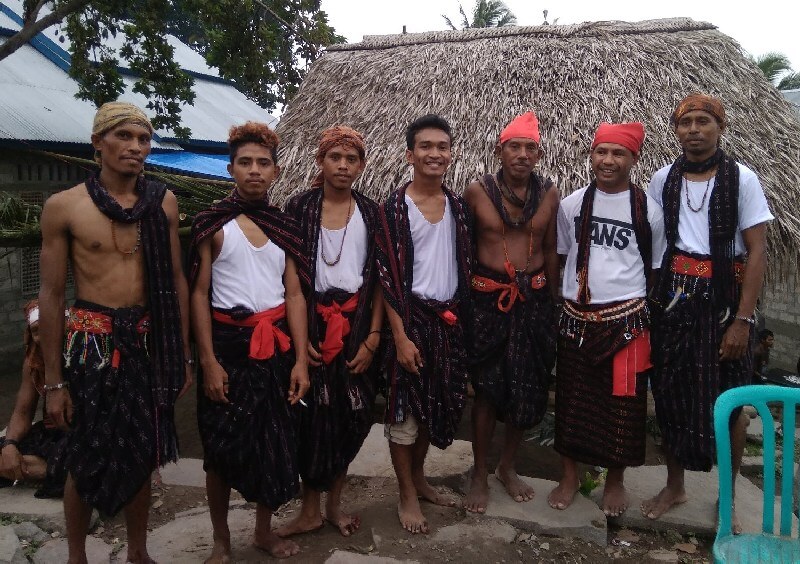 Participants pose after the Pati Karapau is over. Pictured are relatives of the Lakimosa, the Lakimosa himself, and two Catholic priests. I am at the center of the group. Photo: Kelvin Thiru, 2019 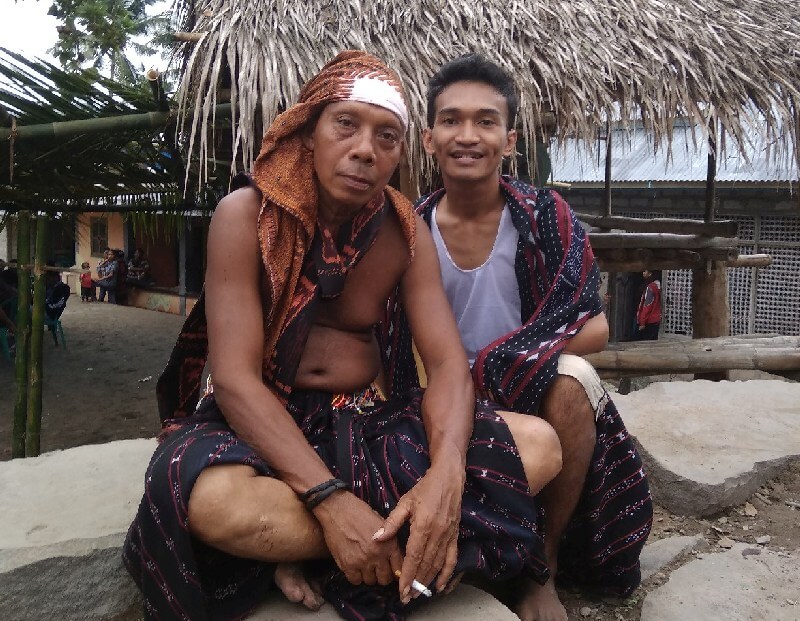 Back to Vol. 8 | Read the Table of Contents | Like Our Stories? Please Donate!

Fauzi Bin Abdul Majid, age 24, is a student at Nusa Nipa University of Maumere of Indonesia. He is a member of the Palu’e Indigenous people of Indonesia. The Palu’e practice various world religions as well traditional ancestor worship. Fauzi believes most younger Palu’e want to learn and know more about traditional rituals, which is why he is interested in documenting the Pati Karapau ceremony. Read more from Fauzi Bin Abdul Majid.