People and Plants: Sustaining Agrobiodiversity through Art and Science in Zimbabwe 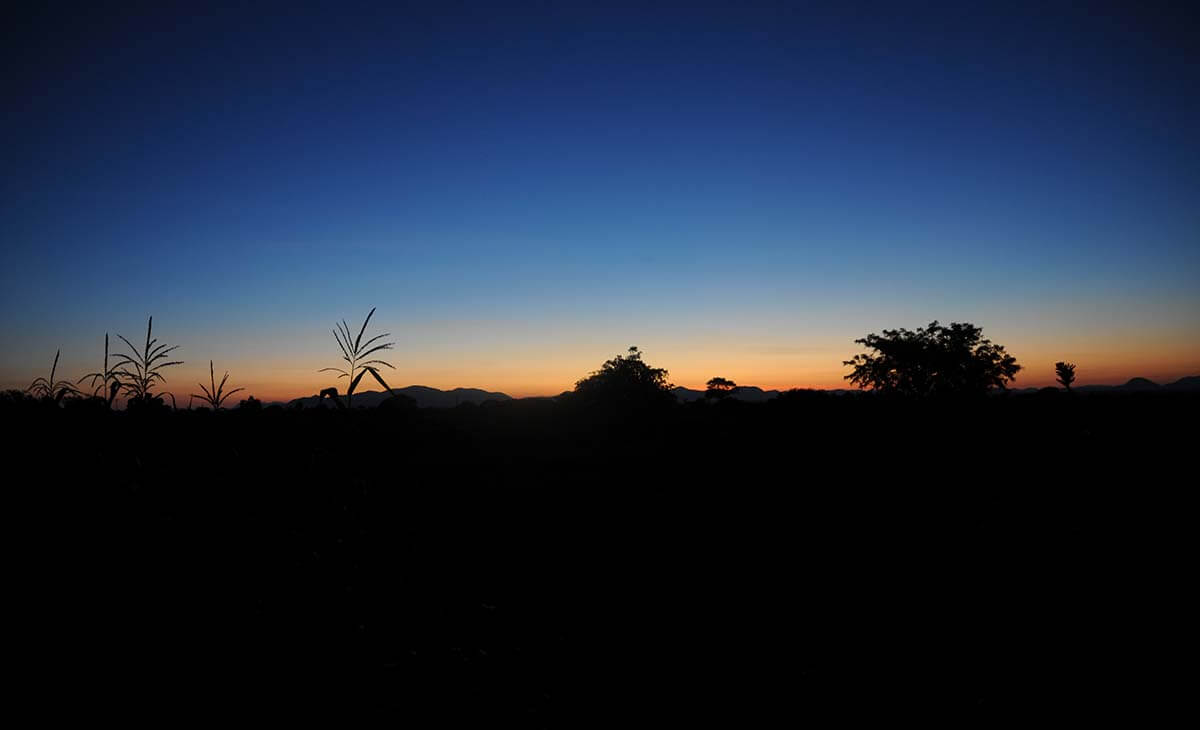 Dawn in the village of Mazvihwa. 2016

Dawn in the village. As the Milky Way—gwararakurumvi—recedes from a sky of deep navy blue, birds start to fly over the fields, espying millet and sorghum. The sun orb pierces the horizon and moves midheavenward. It’s March 2016, and I am a guest in the traditional chiefdom of Mazvihwa, in south-central Zimbabwe, for a month of collaborative research with Indigenous farmers.

Mazvihwa is a three-hour drive from the country’s second-largest city, Bulawayo. During the colonial period (1890–1980), ecosystems and agricultural practices changed. Intensive wetland cultivation by Indigenous people was forbidden by law within thirty meters of any stream or waterway. Some villages were forced to relocate from the riverside to drier land. In the rocky hills, lions no longer rest in caves. The huge trees are gone. Listening to the stories of the local community members, I imagine the landscape two hundred years ago.

As I climb to the top of a hill near Madzoke, a remote village two hours’ walking distance from the nearest jeep road, I can see the whole settlement: an elliptical shape surrounded by small mountains. Whereas the Zimbabwe economy has become dependent on maize monoculture, Madzoke still cultivates varieties of traditional seeds. Although the variety of traditional grains has declined compared to thirty years ago, grains fared better than the maize crop in the recent severe drought. A locally-led NGO, the Muonde Trust, has started revitalizing the traditional small grains as a hedge against drought and increasingly uncertain weather patterns. A local friend and member of the Muonde Trust, Mr. Nemiah, kindly accompanies me to study the traditional crops. He points out seven wetlands under rice and bigger areas of dry fields where finger millet, bulrush millet, sorghum, cowpeas, groundnuts, round nuts, and maize are growing. I crawl up a big rock to draw the landscape in my sketchbook. Seeing my nervousness standing atop the rock, he starts dancing nimbly on another one nearby. 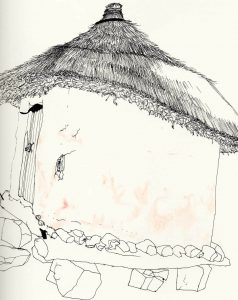 A cat sneaking into a storage house, where small grains are saved. 2016

I spent much of my time in the villages of Mazvihwa drawing illustrations of the traditional crops and asking the villagers about the plants—how they plant, when they harvest, and how they cook them. Drawing the plants helped me to discern the nonlinear, nonpositivist relationships between the people and the plants. Discovering scientific names and nutritional values is important, but so is learning the local names and how people perceive the life of the plants. I created an atlas of the traditional plants with my drawings and photographs, local names, scientific names, use of the plants, and cultivation practices. To give back the information I learned from the local people, I conducted a drawing workshop for the Muonde team, and we drew the landscapes and plants of Mazvihwa. I believe combining Indigenous and scientific perspectives on traditional plants will foster our understanding of human–nature relationships.

I also believe that drawing enables us to better observe and capture the knowledge and wisdom of local people, the life of plants, and interrelations with people and plants to advance science. And, together with the Indigenous communities, I hope to co-create a model that integrates traditional land-use strategies and plant use in order to improve their resource self-sufficiency. 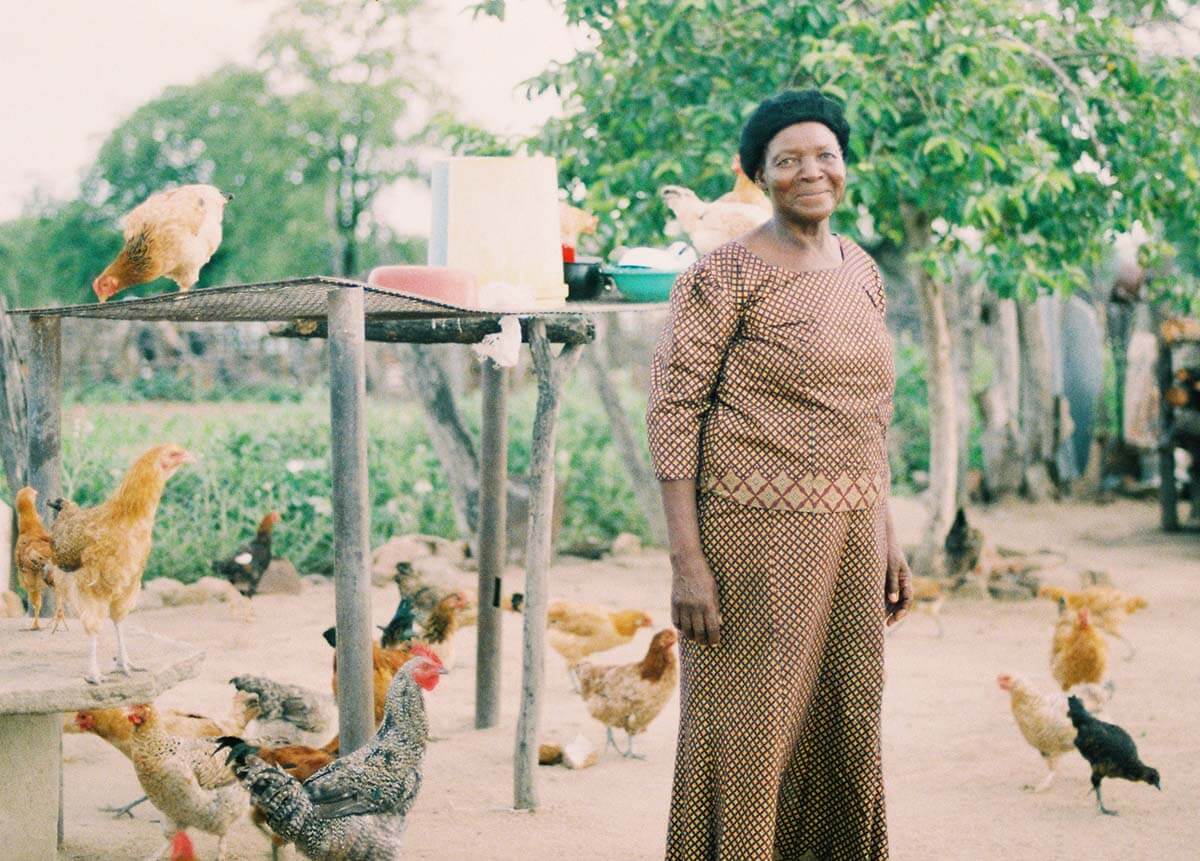 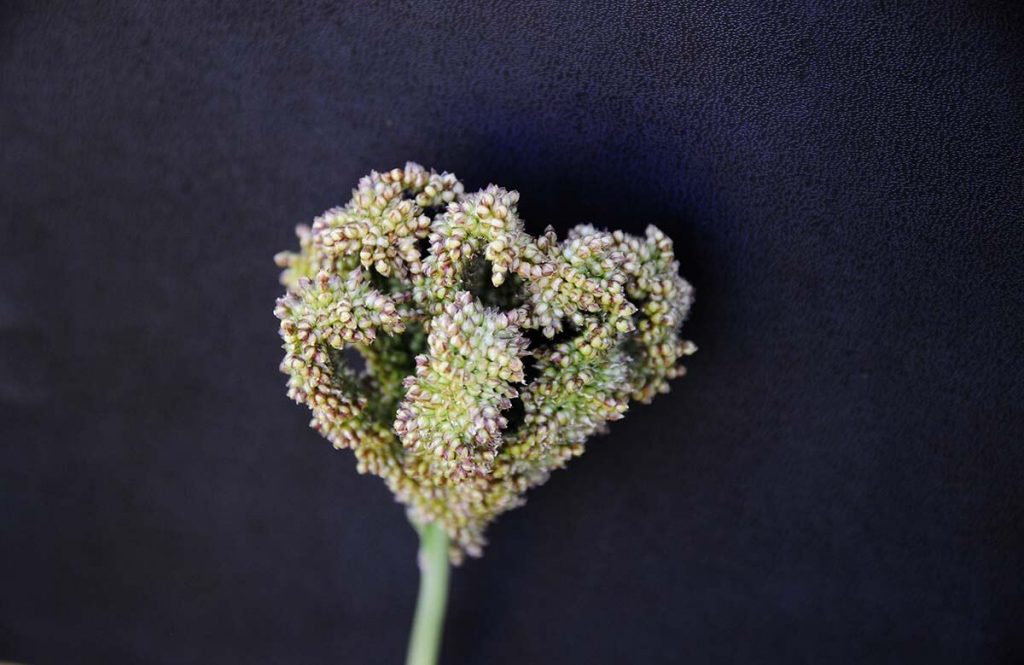 A finger millet, chebwe in the Shona language, cultivated in Madzoke village. 2016

Left: Drawing of a bulrush millet, rushambo. 2016; Center: A sorghum, tsveta in Shona, cultivated in Madzoke village. According to Ms. Mai Hove, a member of the Muonde Trust who is from Madyakuseni village, it is very sweet and often used to make beer. 2016; Right: Fruits were plentiful in the village of Madyakuseni. Small girls quickly climbed up the fruit trees to pick some nyii (Berchemia discolor, commonly known as bird plum) and sumha (Diospyros mespiliformis, commonly known as African ebony). They shared them with me so that I could draw them. 2016 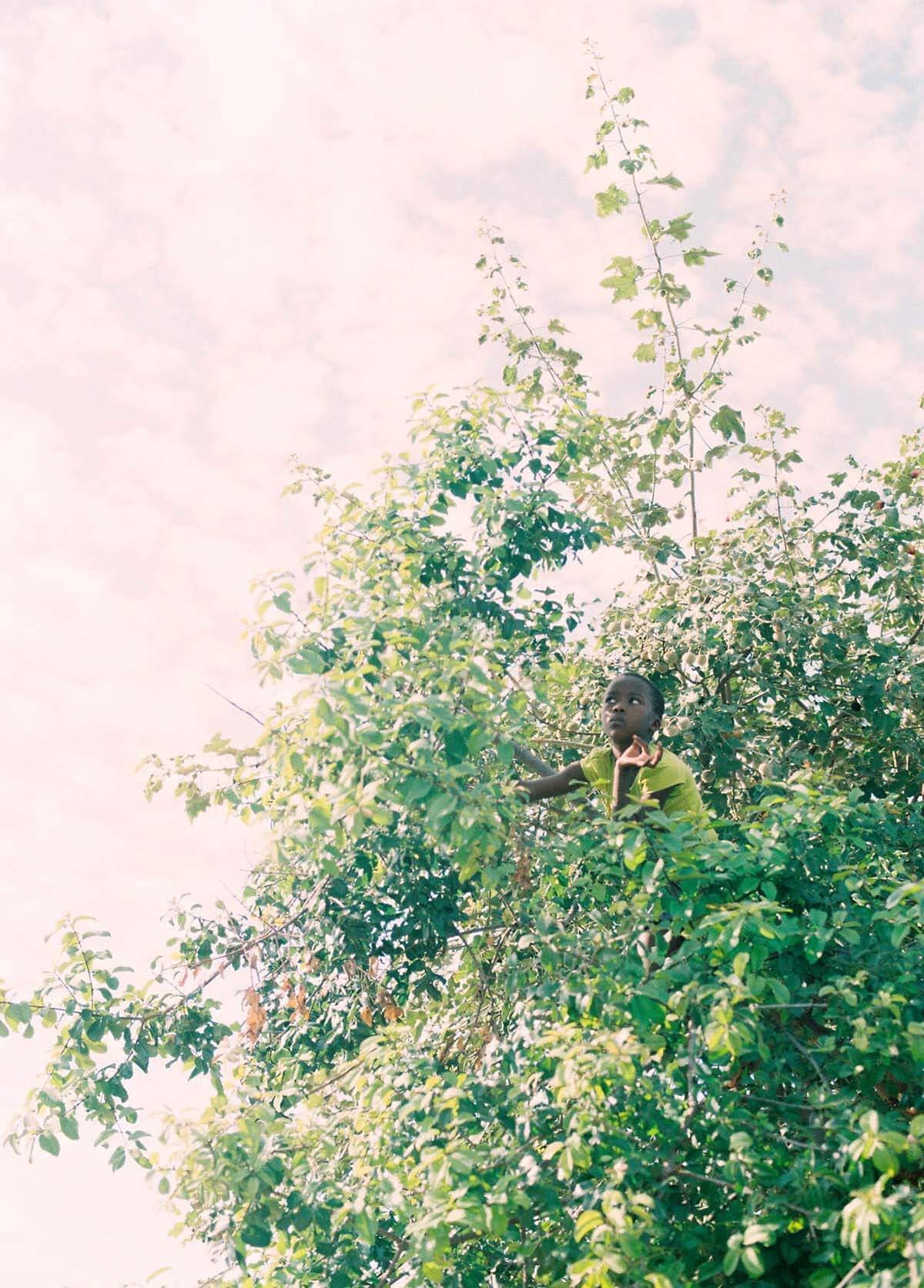 Shanti picking fruits from a tree in Madyakuseni village. 2016 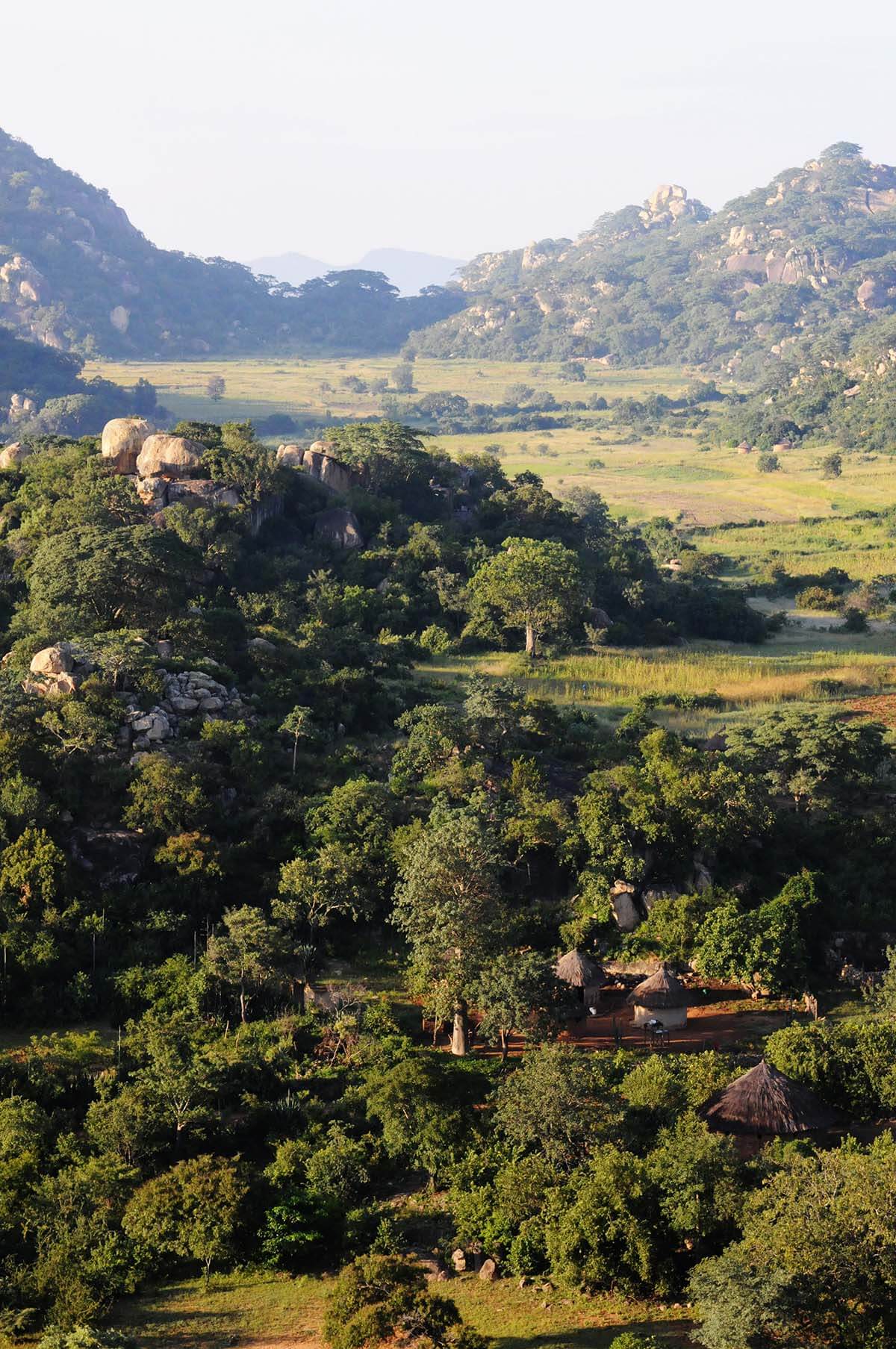 In the early morning, Mr. Nemiah, a member of the Muonde Trust who hosted us in Madzoke village, guided Mai Hove and me as we climbed up the rocky hill to look over the village. 2016 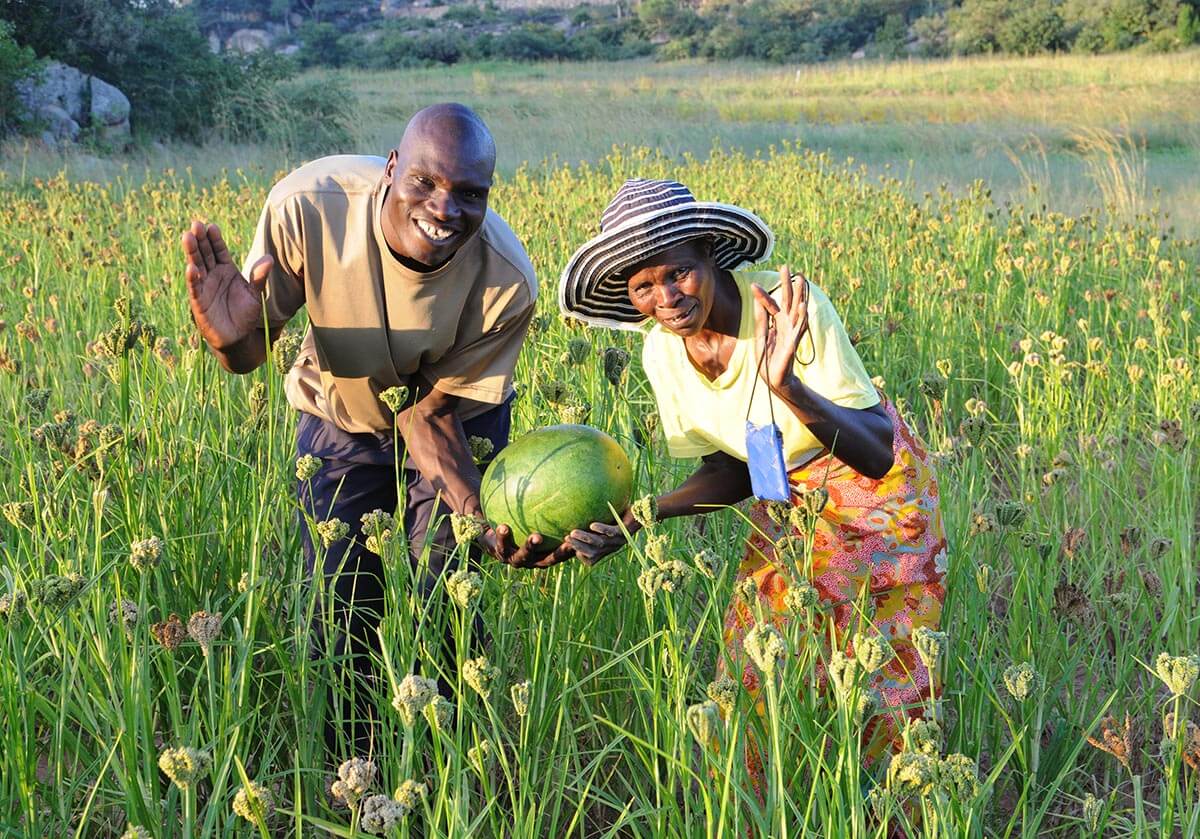 Mr. Nemiah and a relative of his holding a fresh watermelon in a field of finger millet. 2016 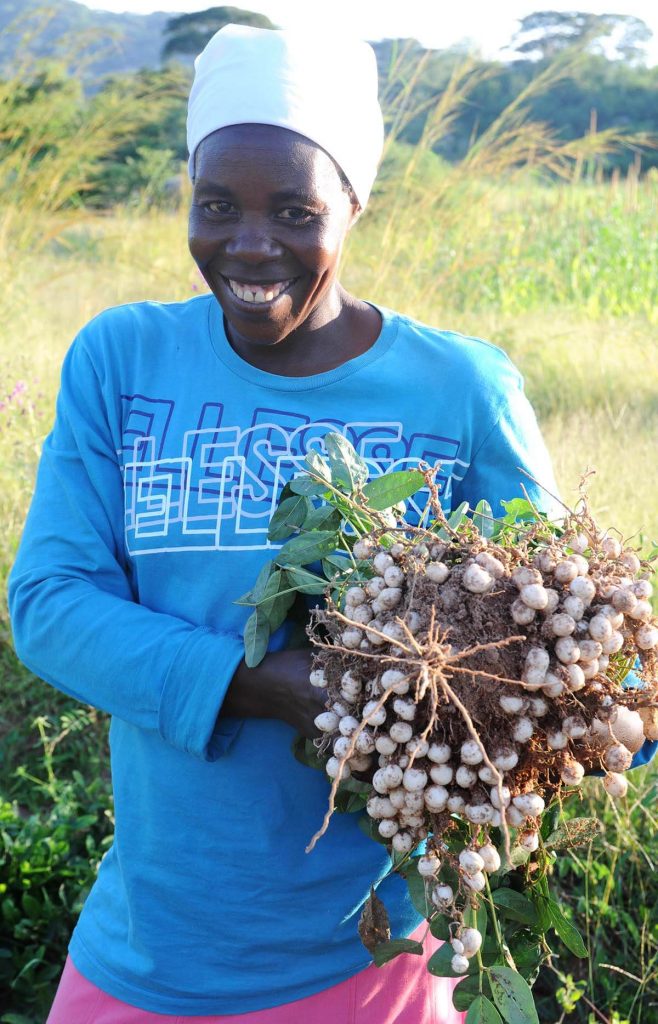 Mai Hove, who kindly came with me to study traditional crops in Madzoke village, holding a groundnut or nzungu. 2016 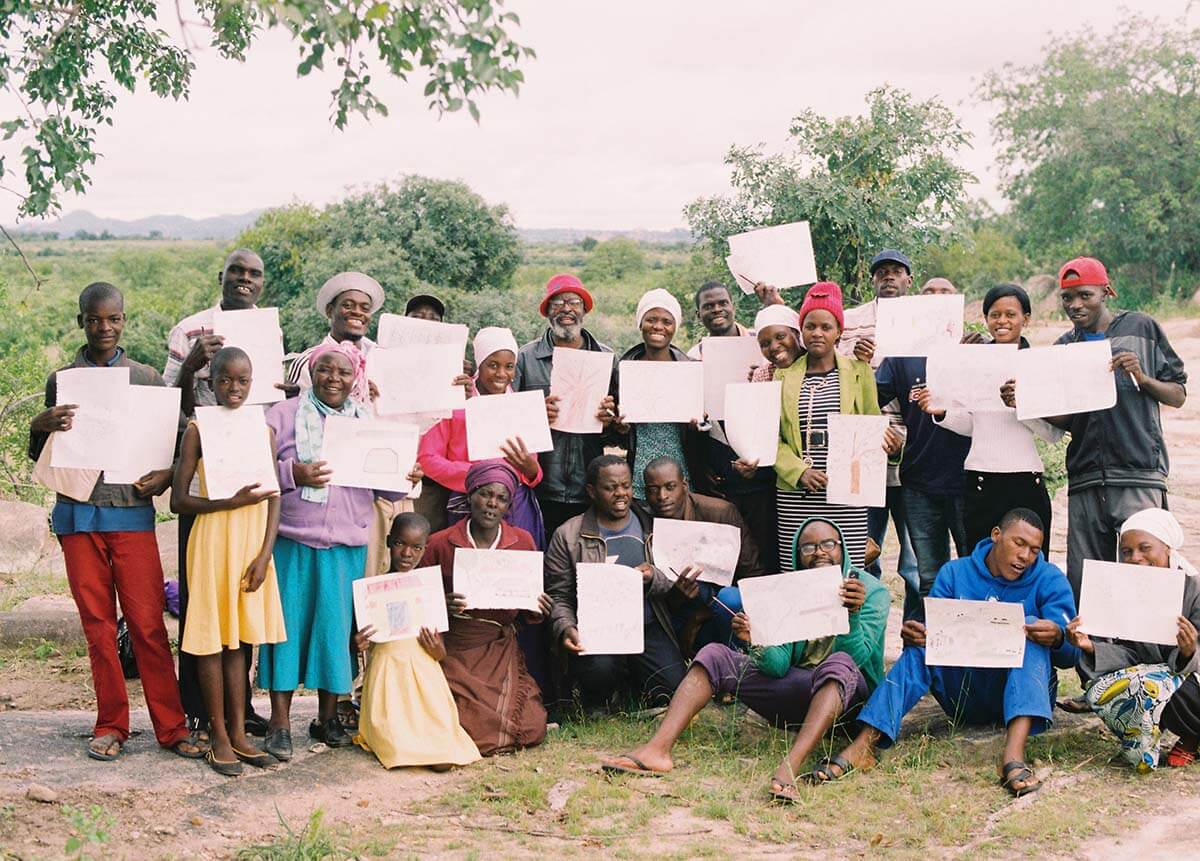 The Muonde Trust team who attended the drawing workshop produced beautiful images of the landscapes and plants. One of them told me that it was his first time drawing. 2016 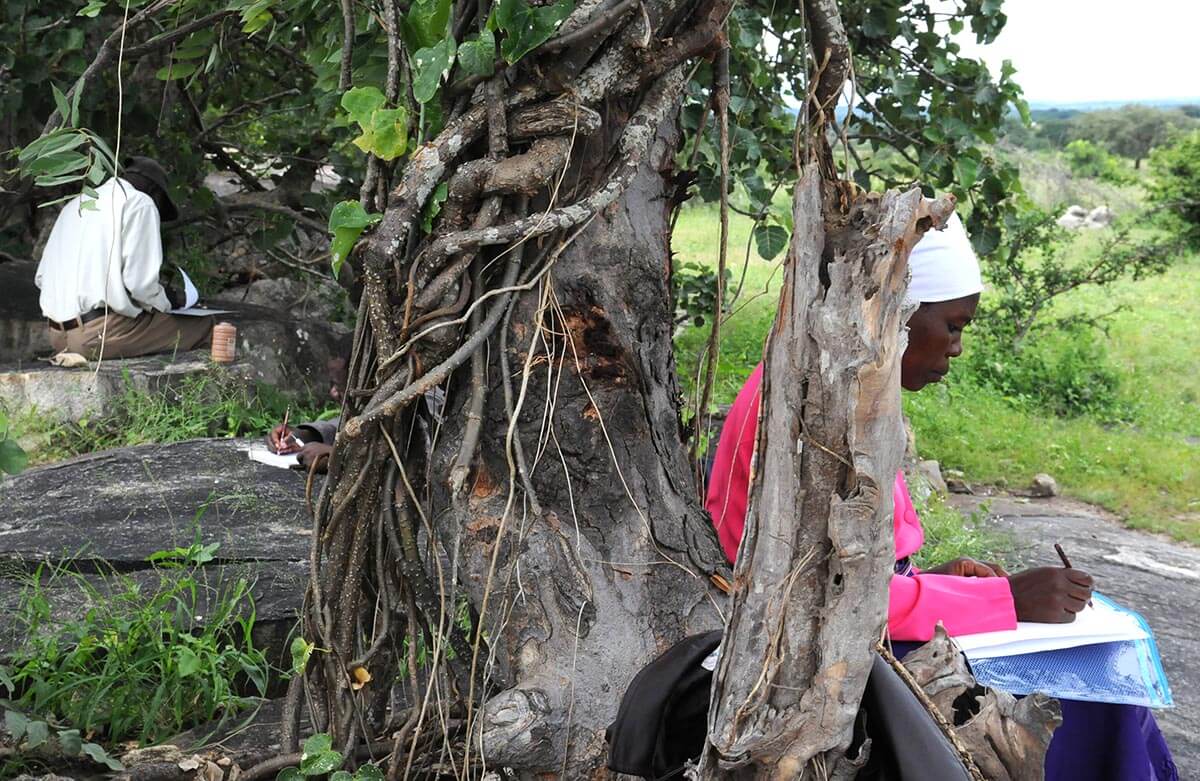 The Muonde team drawing the landscape during the workshop. 2016

Wonderful drawing created by Tatenda, an experienced driver for the Muonde Trust. 2016 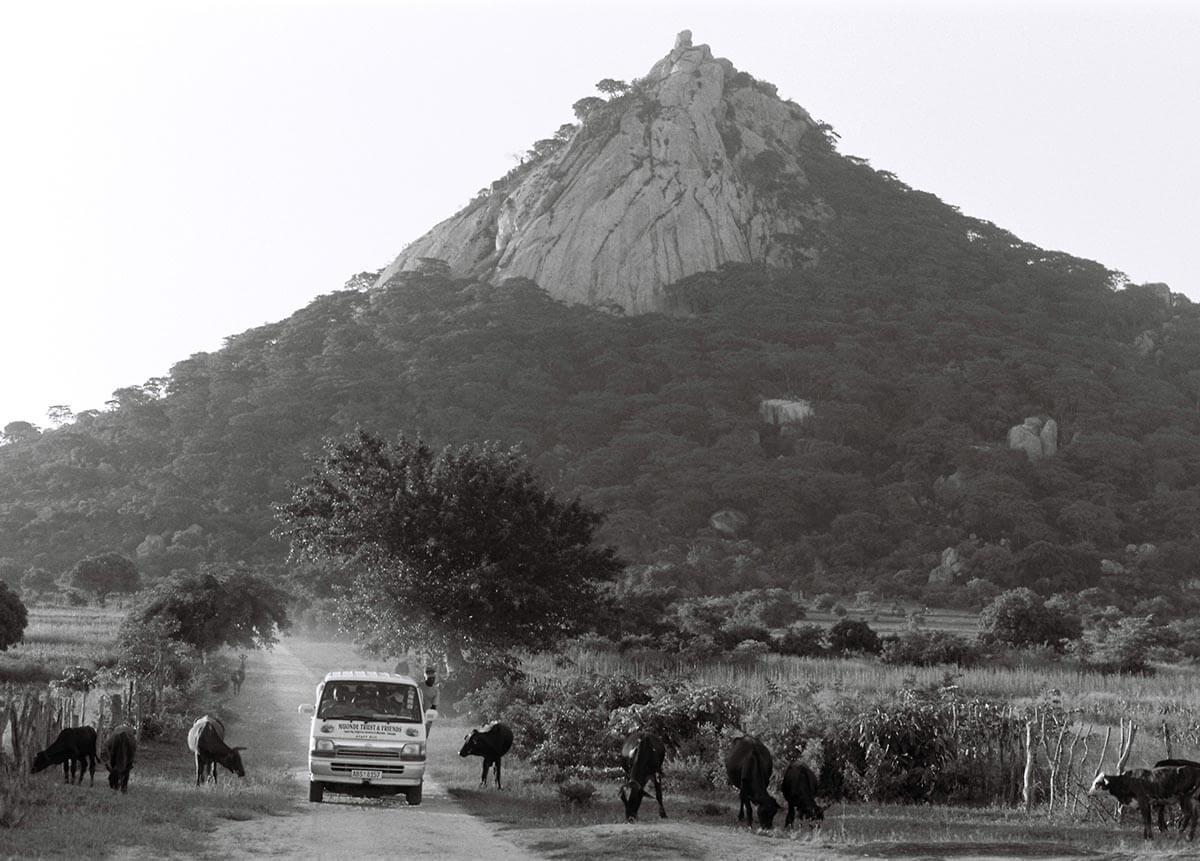 The Muonde team driving back to the headquarters after finishing their work in the late afternoon. 2016

Saori Ogura is a naturalist, artist, and researcher. Her PhD study at the University of British Columbia focuses on sustainable solutions to assist communities in the Eastern Himalayas and Zimbabwe in revitalizing their traditional crops and adapting to climate change. In her drawings and photos, she highlights the relationships between people and nature.