Please Talk to Me! I Am a Stranger Until You Talk to Me

“What?” my friend and I said simultaneously. The sheriff had asked if we had any drugs or guns with us. It was a calm, hot summer evening when we decided to go on a short bike ride after a long, boring three months of quarantine in Ogallala, Nebraska. We biked down the dirt county road onto the paved road, three-quarters of a mile away from our hosts’ house.

Since we had two bikes for three people, two people biked while one walked, then we took turns. It wasn’t too long on our way back home, as the sun was beautifully setting down over the open treeless fields, when a sheriff’s car pulled in front of us. I was on foot and one of my friends was on a bike a few feet ahead of me, while the other was way behind us, still biking back and forth on the asphalt road, as that was easier than biking on the dirt road. 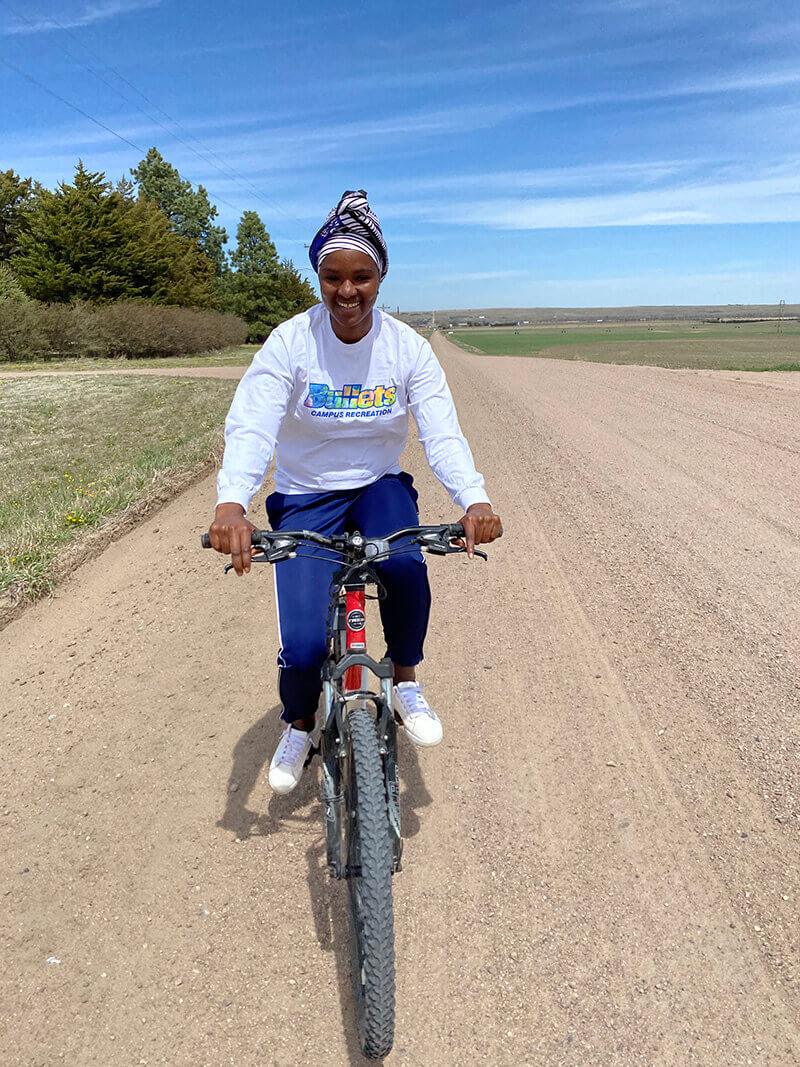 Me biking down the dirt road in Ogallala, Nebraska, where my friends and I experienced police brutality. Photo: Sioni Ayubu, 2020

The sheriff was a Latino woman, maybe in her late twenties or early thirties. She started questioning us: Where are you going? Where do you live? What is your home address? Do you have any official identification with you? After maybe ten minutes of interrogation, during which our other friend had caught up with us, the sheriff realized that we were just three innocent Maasai girls stuck in Nebraska since spring break in March as a result of the COVID-19 pandemic.

Her tone changed, and I could see tears welling up in her brown eyes. Perhaps she felt conflicted: as a woman of color in the United States, she should have been out there protesting against police brutality; instead, because of her job as an officer, she found herself in the very uncomfortable situation of interrogating women of color. Blanketing the air with dust, she drove off up the dirt road to our hosts’ home to confirm our address, which is what her job required her to do.

As a woman of color in the United States, she should have been out there protesting against police brutality; instead, because of her job as an officer, she found herself in the very uncomfortable situation of interrogating women of color. 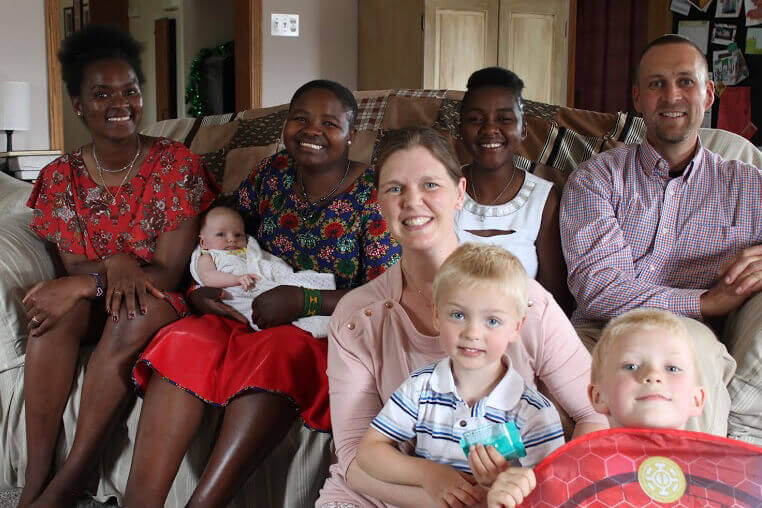 Me, Sioni Ayubu, and Neema Tayai (left to right) with our host parents and their three kids. Photo: Lisa Heinert, 2020

The three of us stood there, watching. It felt as if our feet were nailed in place, me with a portable speaker and an iPhone with a sunflower case, and my two friends on bikes, all confused about what had just happened. Since we had nobody else to turn to, we looked at one another, furious, wondering who had called the police on us. “Suspicious???” asked one of my friends. That was what was reported to the police department: that there were “suspicious black men” riding bikes. Not only were we shocked that someone would characterize us as suspicious, but also, we are all female!

Before coming to the United States almost six years ago, I had never seen myself as black and never encountered any racial biases. Instead, as a Maasai woman, I had experienced ethnic bias.

Before coming to the United States almost six years ago, I had never seen myself as black and never encountered any racial biases. Instead, as a Maasai woman, I had experienced ethnic bias. With more than a hundred tribes and ethnic groups in Tanzania, each tribe speaks their own language and practices different customs and beliefs. Therefore, it is easy to identify who belongs to which ethnic group, especially the Maasai, as we stand out due to our characteristic and well-known attire.

Once my friend and I went to a hair salon in Tanzania to get our hair done. As we waited to be served, we sat down on a comfy red sofa and started chatting in our native language, Maasai. When it was my friend’s turn to have her hair done, the hairdresser started yelling at her in Swahili with an angry voice: “Simamisha kichwa, we Maasai!” (“Keep your head straight, you Maasai!”). I told my friend in English: “We can just go to another salon!” The hairdresser and the other women who were waiting in the salon looked at us in surprise. They started asking us where we went to school, and when we said that we studied in the United States, the tone of the conversation changed from yelling to excited curiosity. 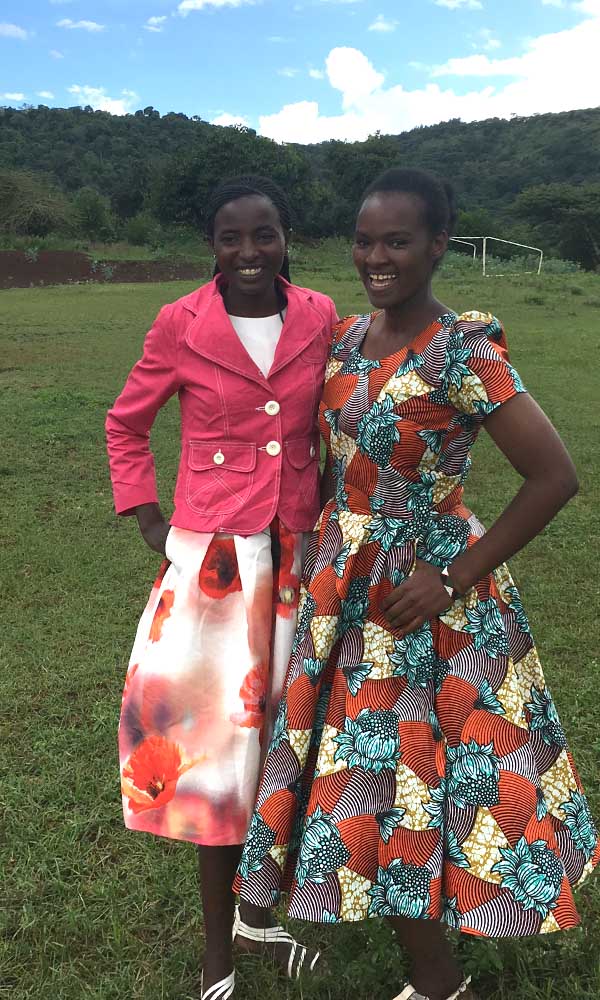 Me (right) and the friend whom I was with at the hair salon in Tanzania. Photo: Loondomon Sambweti, 2019

Similar to people of color in the United States, who live in a largely segregated society, we Maasai live on our own, often apart from other tribes in order to keep ourselves united and comfortable practicing and preserving our culture. As a result, other tribes perceive us to be washamba, which means “uncivilized” in Swahili, and treat us differently. Yet, there are highly educated Maasai, like me and my friend, who go to school in the United States or in other African countries but still practice their culture. Even after over five years of living in the States away from my family and culture, I still speak Maasai, as I always have.

Several different experiences in the United States and at home have caused me to reflect on my identity as a Maasai, a person of color, and a woman.

Several different experiences in the United States and at home have caused me to reflect on my identity as a Maasai, a person of color, and a woman. While taking a Social Psychology course this summer, I learned that cultures differ in the ways in which we feel about ourselves and the ways in which we treat one another. I grew up in an interdependent culture, where we see ourselves and our contributions as part of a group. We help one another for free with grazing livestock, weeding, harvesting, and all sorts of other activities. I would babysit our neighbors’ kids for free when they had to go on a three-hour walk to the market.

Meanwhile, right now here in Nebraska, I live with a host family with three young kids, and because the parents have to work, I help babysit the kids. I find it strange that I live here, eat, shower, and sleep for free, yet my hosts pay me to babysit their kids. The independent nature of American culture has led people to detach themselves from simple yet meaningful relationships that my interdependent culture has taught me to embody and embrace. 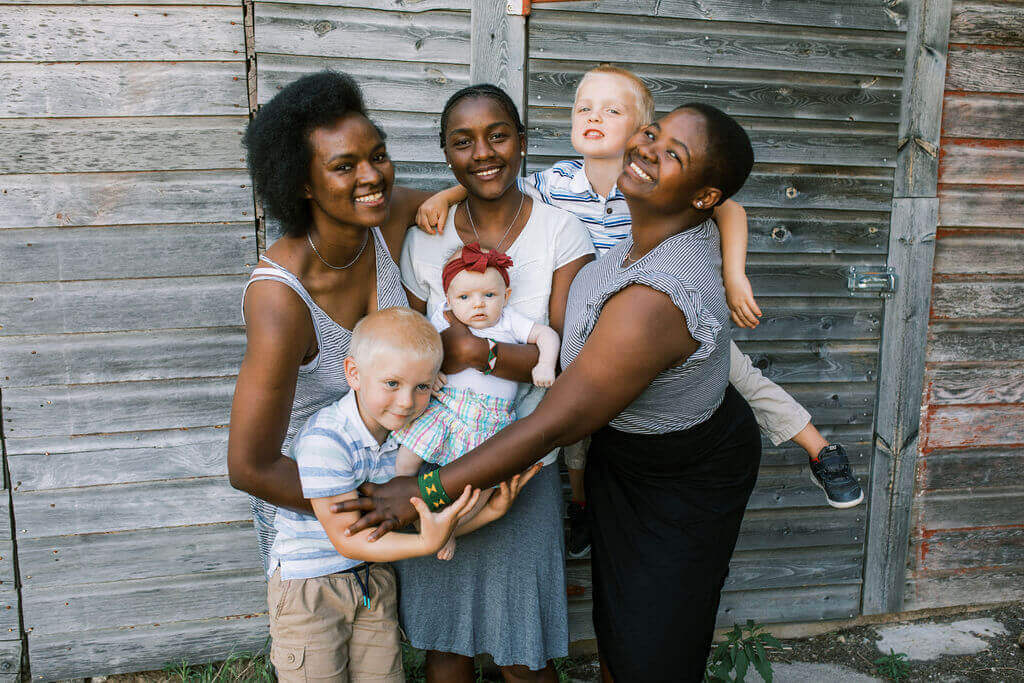 Me, Neema Tayai, and Sioni Ayubu (left to right) with our hosts’ children in Nebraska. Photo: Jamie Wieseler, 2020

On senior prom night at my U.S. high school, my friend and I left to go to the washroom. I was in a beaded off-the-shoulder Maasai dress, rubega, when a guy who I guess was curious to look at the dress approached me. My friend pulled me away, whispering: “You can’t talk to strangers!” We walked back to the dance floor in dead silence, and I wondered, why didn’t we just listen to what he had to say?

I felt really embarrassed when my friend told our chaperone about the incident and they made a big deal out of it. I sat there in that very noisy room pondering what was going through their minds. In mine, I just wished I had talked to the guy as a fellow human being. I don’t think he had seen a Maasai dress before and he might have been just curious, but I will never know. I would have known if we had let him say whatever he was about to ask. This was just one of several incidents in which my American friends tried to teach me not to talk to strangers. 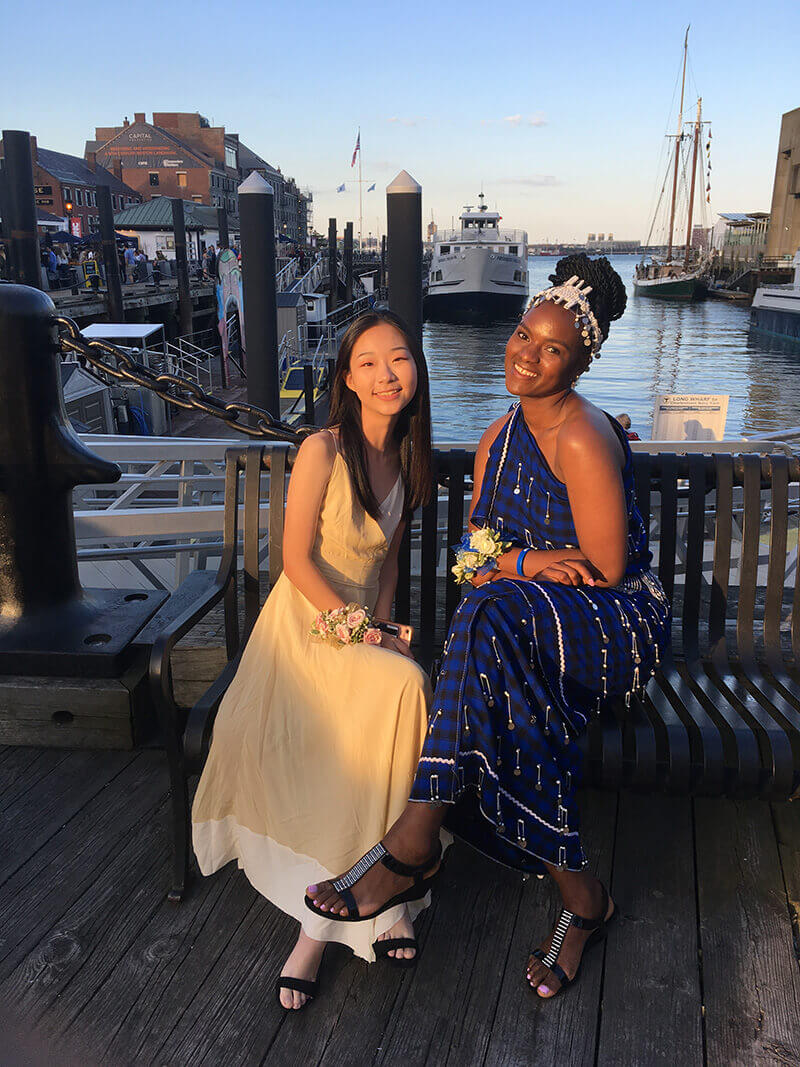 Me (right) in the off-the-shoulder beaded Maasai dress that I wore on senior prom night in the USA. On the left is one of the friends of mine who tried to teach me not to talk to strangers. Photo: Unknown, 2019

By contrast, my parents always taught me to greet people, especially adults, even strangers. I would be walking back home from the farm with my mom and encounter a group of men of my dad’s age. Although I always tried to convince my mom to take an alternate route with me as a way to avoid meeting that group of men, she always insisted we keep walking on the same path, and I had to greet them traditionally, where I had to bow and they touched my head, one by one.

My resistance was due in part to my own shyness, but I also felt uncomfortable with how women were treated in my community, which was constantly reinforced by greeting rituals. Culturally, men are viewed as leaders and strong members of the community, hence higher respect towards them is demanded. I tell myself that I am smart and intellectual, but if I picture myself through the eyes of men in my community, I am “just a woman.” When a woman calls for change, she is seen as rebellious, regardless of her objective. A woman’s actions are not rewarded in the community. Over time, despite understanding their own strengths, women have accepted this reality as a cultural norm: that they always come second. Like sexism has been normalized in my culture, much as it is a legacy of past history, so has racism been normalized in the United States. 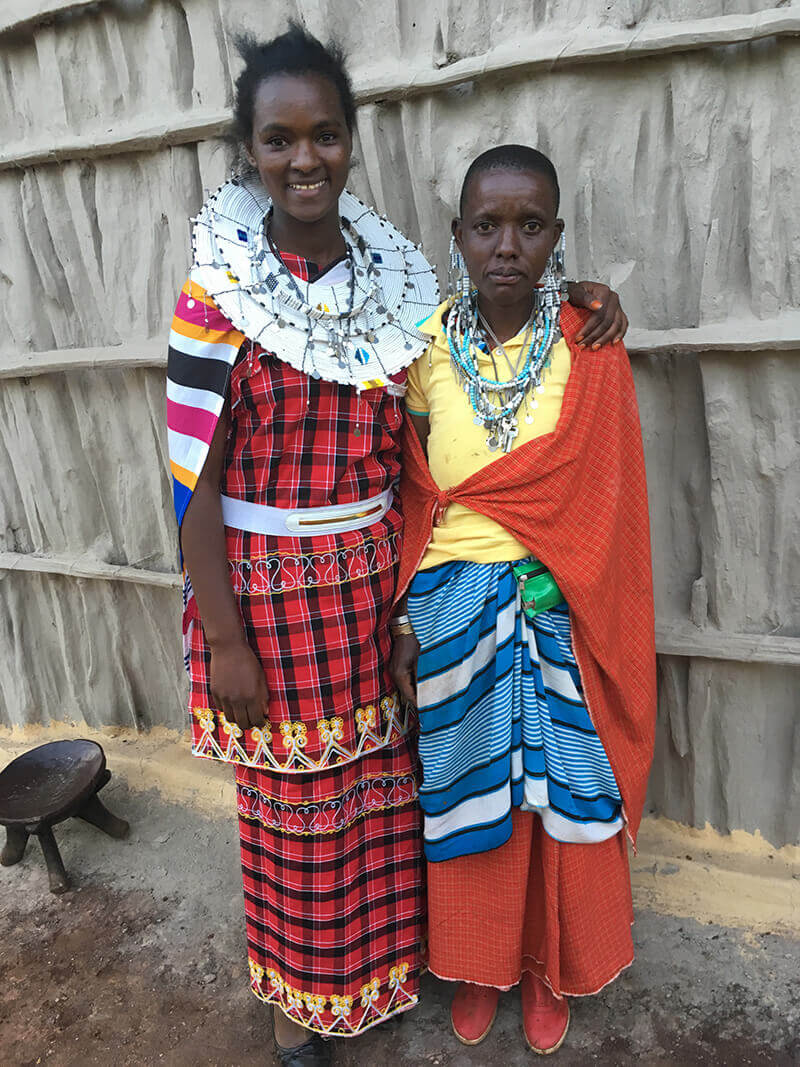 Me with my mom (right) who constantly insisted that I should greet people, even strangers. Photo: Veronica Mayasek, 2018

When I was riding my bike on that dirt road in Nebraska, I experienced real American history—a history filled with racism that has brought us to a present in which we are sometimes not open to talking to strangers. This is a history I had read about in books and seen in movies, but now I have come to know it to be true. As a Maasai woman from Tanzania, I never pictured myself as subject to experiencing police brutality. This incident has changed the way I see myself and the world I live in.

I experienced real American history—a history filled with racism that has brought us to a present in which we are sometimes not open to talking to strangers.

Despite empathizing with people of color in the United States, I initially didn’t understand the pain and suffering they were going through. As an African, I didn’t associate myself with the history of racism in the United States as much as American people of color do, because I found myself in a different situation. This encounter has made me reflect on the tribalism and sexism experiences I have faced in Tanzania. In addition, it has reminded me of the importance of talking to strangers that my mom had impressed on me. If whoever reported on us had stopped to have a conversation with us, they might have realized that we were just innocent girls on a bike ride after a hot summer day during three long months of quarantine. Since we are black and didn’t look familiar to the person that reported on us, they assumed that we were threatening. However, it only took a brief conversation with the sheriff, though complicated by questioning, to come to a moment of realization that led to tears and a sense of connection.

We can’t know one another if we don’t talk to one another. Even a simple greeting is enough to start a conversation—enough to brighten one’s day or (why not?) to create a beautiful relationship.

Edna Kilusu is an international student from the Maasai ethnic group in Tanzania. She is currently a sophomore studying Psychology and Anthropology at Gettysburg College, Pennsylvania, USA.