They say the traffic in London has killed the song of the nightingale. When they serenade each other, they sound more like the honking of horns, the squealing of brakes, and so the nests

Yet a coyote sought shelter in a Chicago Starbuck’s last month, the closest thing to a cave he could find, stood shaking next to the cooler in the dark corner with the Odwalla juices and the caffeine drinks and the mineral water from Fiji. Just last weekend, in Santa Fe, in the hours before dawn, on the Plaza while the town slept, a mountain lion leapt through the door of a jewelry store, leaving a spider web of broken glass. In Denver, raccoons pilfer garbage beneath city streetlights.

Sleek Peregrines, with nesting boxes built into skyscrapers, stalk the pigeons cooing from the rooftops. Owls swoop down alleys, between buildings, hunt the falcons which hunt the doves. Moose leave the northern wetlands, trek long-legged across Wyoming’s Red Desert, nip purple blossoms from our alfalfa field, half-way between here and the short grass prairie; black bears forage in suburban kitchens, paw their way to the shallow end of public pools.

Elk herds cross highways, leap burrow ditches, tear through fences, travel the old migratory routes to the land their ancestors once grazed, while in Billings the city council passes laws prohibiting dogs in public parks. Yet, they say that New York City, without man to trim its hedges, prune its trees, mow its grasses, replace roads and bridges and traffic signals, would soon be overrun with feral dogs, yellow-eyed cats, and ivy.

New York City, without man or woman to tame it, would within two hundred years begin to crumble, in half a century would turn to dust, turn back to the earth within a millennium. Wars would fade from the horizon, borders disintegrate, walls come tumbling down, pandemics pass from memory. Silt would rise in the dams, rivers return to their beds. A new human would rise, begin the task all over again, would carve flutes from the branches of cedar trees, piano keys from the tusks of mammoths, stain glass from the sands of the Sudan, sew drums from the skins of buffalo.

Songs would rise from its thirsty throat, deep and guttural. Eventually, the trilling of women would pierce the night sky, slice through the blue darkness like a sleek whale. Nightingales 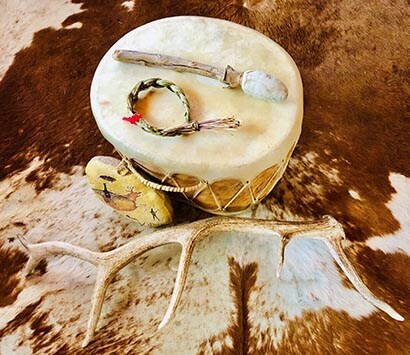 Leather drum on a cowhide with an elk antler and braided sweetgrass. Photo: John Gritts , 2020

Many years ago, I read that in London the nightingale, at the northern edge of its habitat, had been red-listed because of growing concern among conservationists. The influence of London’s “urbanscape” was impacting nightingales in unexpected ways, altering even the courtship rituals on which the species relied—the beautiful serenades of the male nightingales were changing. Its very language was changing.

I was struck by this image, and it became the first underpinning for my poem, “Reclamation.” I began noticing other examples of unusual interactions between animals and humans, places where worlds collided in ways that threatened species and diversity. “Reclamation” attempts to bring to the reader’s attention these places of intersection and asks the reader to pause and consider how the dominance of one culture over another (human culture over nature), creates an imbalance that might eventually threaten our very existence. 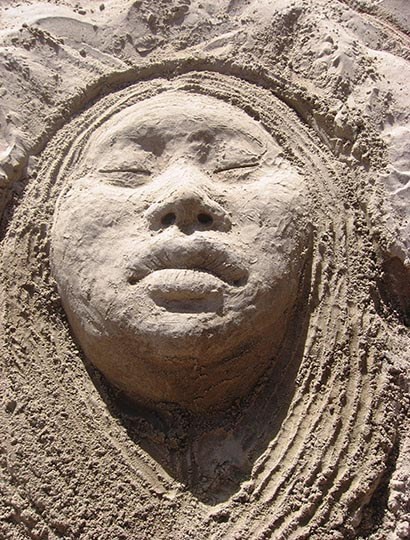 The second underpinning came when I read how quickly a metropolis such as New York City would return to its precontact natural state if humans no longer inhabited it. The landmass upon which the city is built lies only a few hundred feet above sea level, is flanked by two rivers, and once had diverse geology—varying from solid granite to swampland to densely overgrown hillsides. The idea that it would only take a few hundred years for this landscape to return to its natural state seemed like a very hopeful idea. Humans might wipe ourselves off the face of the earth, but we were not powerful enough to wipe away all creation. Nature could rise from our extinction, taking its own conscious and powerful actions to recreate life on planet Earth.

This poem perhaps sits at the edge of the extinction rebellion, finding its center in Nature’s rebellion rather than our own, but also asking the question, How would we do it over if we were given a second chance? 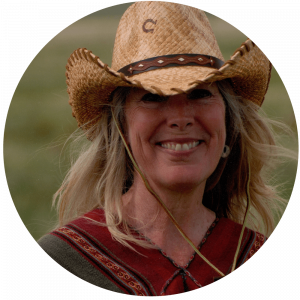 Page Lambert teaches in the professional creative writing graduate program at the University of Denver. Co-founder of Women Writing the West and nominated for two Pushcart Prizes, Page is a member of the International League of Conservation Writers, adviser for the Rocky Mountain Land Library, and senior associate with the Children & Nature Network. Read more from Page Lambert.