My video, River of Brown Waters, is the story of a river called Ewaso Ng’iro in northern Kenya. The river arises from the west side of Mount Kenya and flows through the pastoralist counties of Laikipia, Samburu, Isiolo, and Marsabit. It supports wildlife and many other species and has been, and continues to be, a lifeline and a source of livelihood to the region’s Maasai, Samburu, Borana, and Somali pastoralist communities. The river is a giver of life, from the simplest day-to-day chores of a pastoralist woman at home, all the way to livestock and to the wildlife and vegetation in the ecosystem. It is also a source of heritage for the communities, being central to many major rituals, traditions, and cultural ceremonies that define these communities’ Indigenous identity. As well, the cultural importance of Ewaso Ng’iro is apparent in the local folklore, as many songs, proverbs, riddles, and stories all revolve around the river. 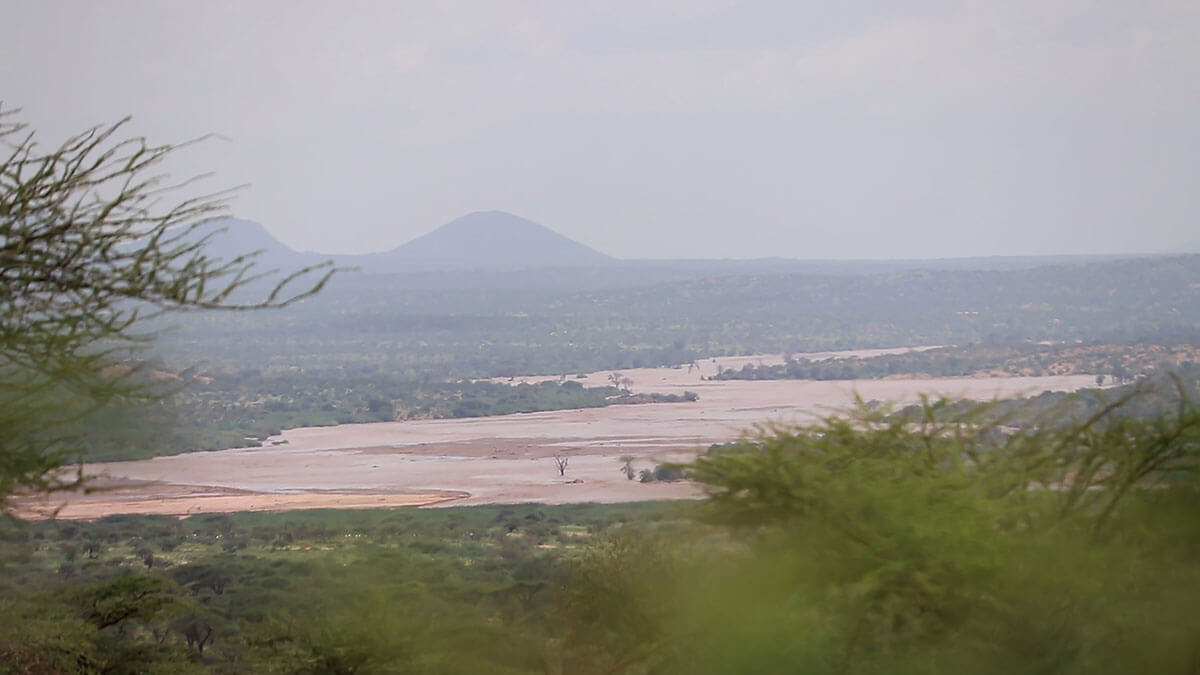 The middle course of the river in Samburu County, some kilometers away from Samburu National Reserve. Photo: Franklyne Mudulia, 2019

The river is a giver of life, from the simplest day-to-day chores of a pastoralist woman at home, all the way to livestock and to the wildlife and vegetation in the ecosystem.

Known as one of the permanent rivers of Kenya, Ewaso Ng’iro is now facing serious threats. It has become seasonal, flowing at the mercy of rains whose patterns are being altered by climate change. Other threats arise from national government megaprojects, conflicts among different stakeholders along the river, and activities such as sand harvesting and charcoal burning. As the life of the river is increasingly at risk, so are the cultures, traditions, and livelihoods of the pastoralists, who are facing a slow extinction that goes unnoticed by everyone except those communities themselves. Wildlife that the communities have lived with and conserved for a very long time is also facing a gradual extinction. 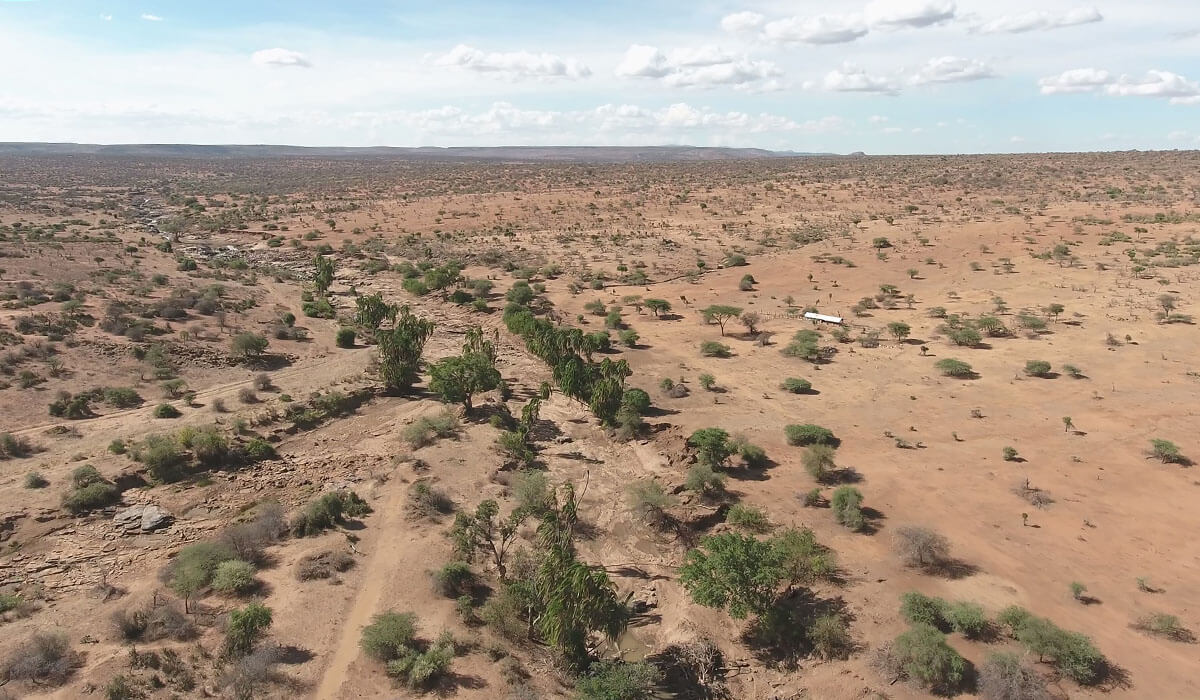 A March 2019 drone shot of the landscape through which the river flows at Waso in Laikipia County, showing the dry riverbed. Photo: Lemarti, 2019

In a previous video, Ewaso Ng’iro—Camel Caravan (Langscape Magazine, Vol. 8, 2019), I filmed a community-led initiative that has been taking place annually since 2013: a camel caravan walk along the river that aims to create a voice for the river as well as for the communities, livestock, wildlife, and vegetation that the river supports, and to raise awareness of the threats and why we need to protect and save the river.

As the life of the river is increasingly at risk, so are the cultures, traditions, and livelihoods of the pastoralists, who are facing a slow extinction that goes unnoticed by everyone except those communities themselves.

The reason why I wanted to tell more of Ewaso Ng’iro’s story is that people are still reluctant to see the changes that are happening along the river’s ecosystem, even though a lot of lives are tied to it: human lives, the lives of human cultures and traditions, the lives of many animal species from livestock to wildlife, and the lives of many kinds of plants. If no action is taken, one day we’ll wake up to a dry riverbed, and we’ll only be left with telling the history of a mighty river that once was but is no more. 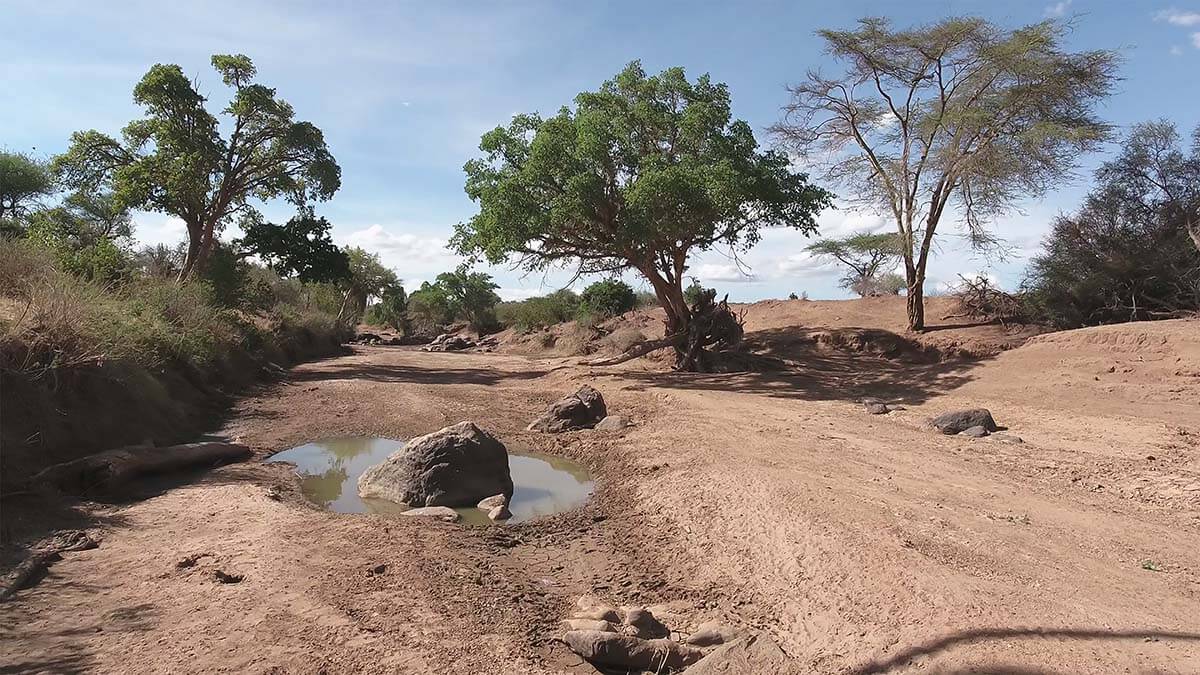 In this shot from March 2019, taken in the middle course of the river in Laikipia County, at a place called Waso, the riverbed is completely dry. Photo: Laissa Malih, 2019

If the river dies or goes into extinction, then we’ll lose all those lives, and people will lose their own cultures and traditions. For example, the circumcision ceremonies are entirely dependent on the river, because there are certain rituals that the river’s water has long been used to perform. As another example, in the video an Elder explains how some species of trees and herbs have been lost simply because the river’s flow keeps fluctuating—sometimes it has water, while at other times it is very dry—as it is now entirely dependent on the rains, which are fluctuating too due to climate change. 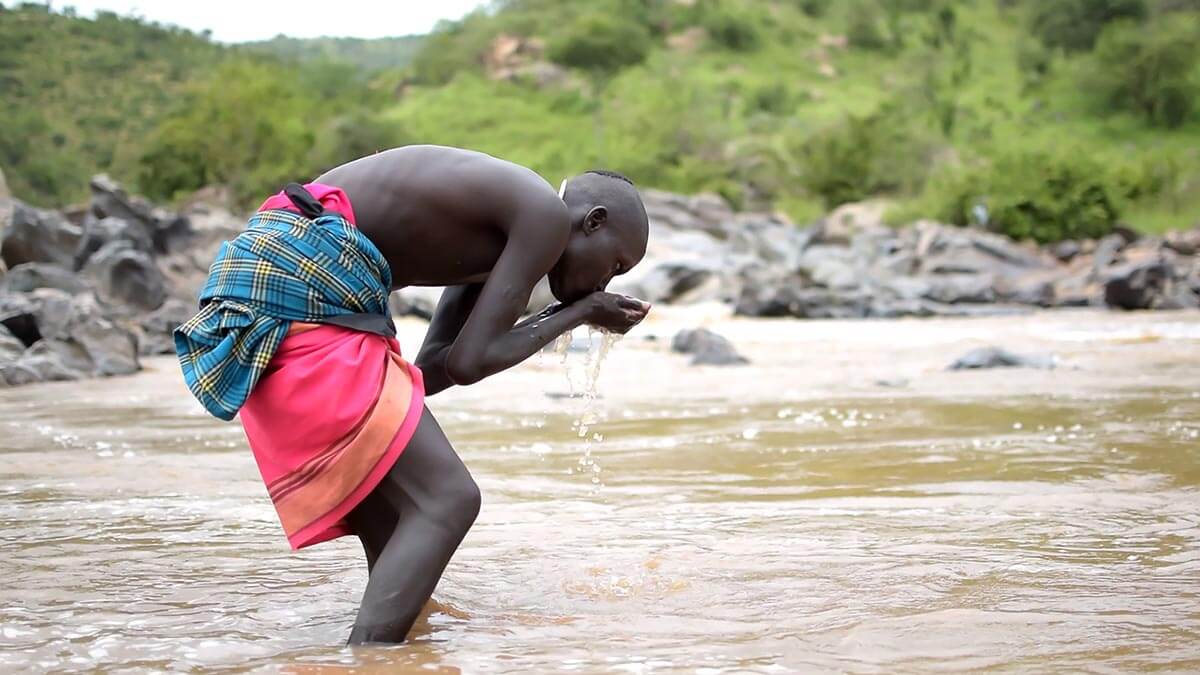 A boy who was about to undergo circumcision had to come to the river to cleanse himself with the water both by bathing in it and drinking it. Photo: Laissa Malih, 2019

The “biocultural extinction rebellion” comes in different forms. One is rebellion against the ignorance of our current generation, especially the youth. Most of the people who are concerned about the river are members of the older generation, who are worried for the future generations and the fate of their culture. Nowadays, our youths prefer to run away from reality and assume that the problem will solve itself. They are the only links to both the modern world and the traditional life in the villages because they have been educated in both. They can understand what’s happening, especially with climate change. When you come to the Elders in the villages, yes, they do have an idea; but in their own languages they have no scientific terms to explain the issues of climate change and biodiversity extinction. People in the younger generation are the ones who should help build movements and raise the voices of rivers, trees, animals, cultures, and traditions, so that they may still be there for generations to come. 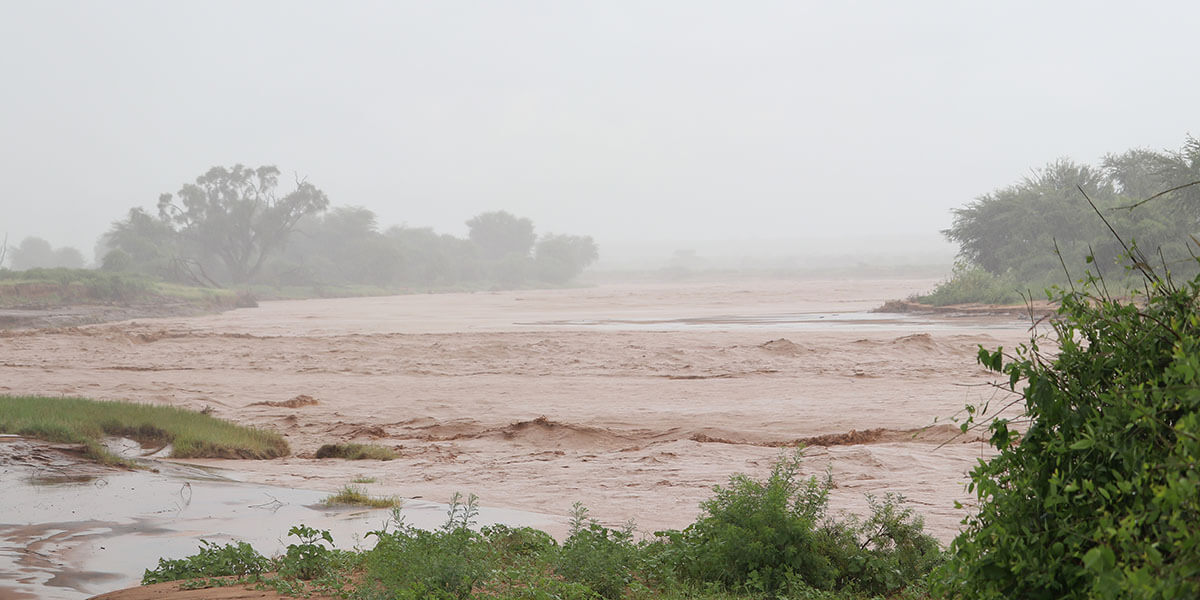 Ewaso Ng’iro during the rains of November 2020. This was taken inside the Samburu National Reserve in Samburu County. Photo: Franklyne Mudulia, 2020

Indigenous communities around the world are caregivers and protectors of the environment, and so most of their regions are rich compared to other places.

The other form of biocultural extinction rebellion is against the marginalization of Indigenous people at the local, county, and national levels. In those contexts, Indigenous people have no voice—or if they do raise their voice they are silenced because they are assumed to be backward and not in need of first-hand help to combat climate change and to protect their ecosystems, biodiversity, and cultures. In fact, others would like to just come in and take whatever Indigenous people have. We all know that most Indigenous communities around the world are caregivers and protectors of the environment, and so most of their regions are rich compared to other places. For example, in my community people really treasure forests because they are a source of medicinal herbs and other products needed in the village. The forest is also home to the wild animals that people have interacted with for a long time. 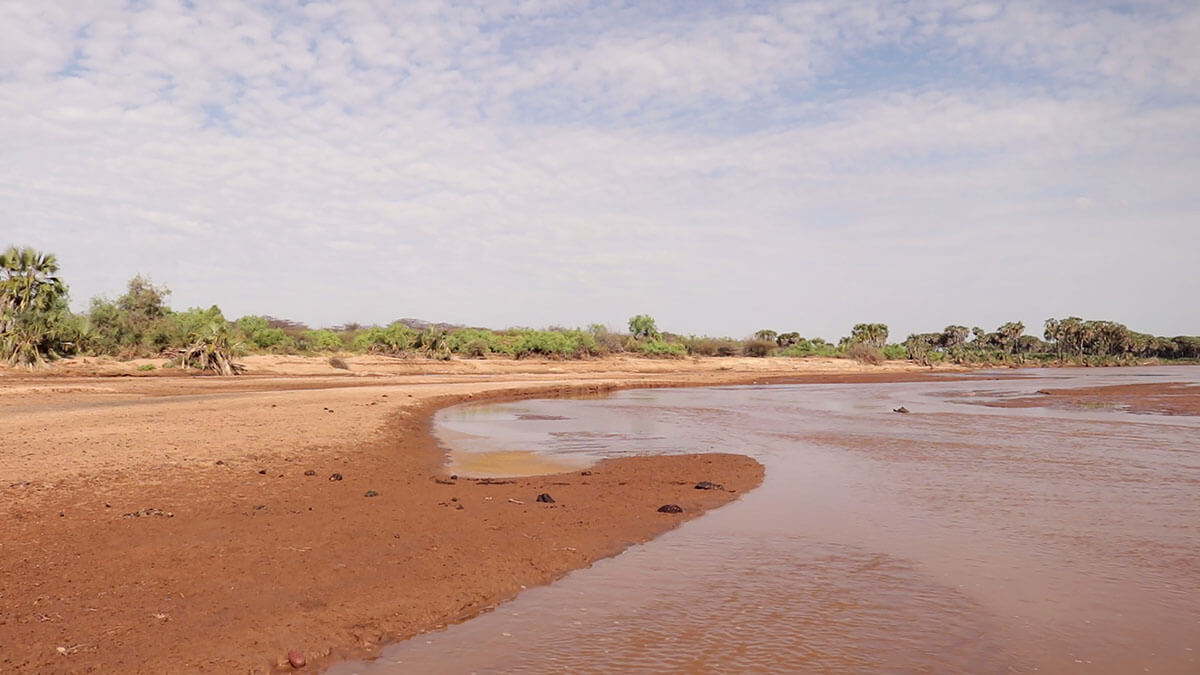 A scene along the lower course of the river in Wajir County. Photo: Franklyne Mudulia, 2020

In my documentary, there is an Elder who explains how trees, especially the really big ones, were considered sacred and were a form of dowry. Since the Indigenous communities didn’t make use of money, the trees were their treasures, important for their livelihoods, such as for beekeeping. A family might own several trees. Owning a tree meant you had to protect it so that your livelihood could also thrive. Some trees served as sacred sites for prayers and specific rituals. But now, due to marginalization and people wanting material goods, many of the trees have been lost. Someone will come in and cut a tree that has taken hundreds of years to grow, so that they may either sell it or make furniture from it. And also because of marginalization, when a report is made that a tree was cut illegally, the authorities won’t take the complaint seriously. They will assume that you, as an Indigenous community, don’t have much use for the tree aside for beekeeping or prayers!

River of Brown Waters tells the story of the river’s life across generations, through the voices of pastoralists who speak as the river itself, recounting its history, its importance, and the threats it is facing. In the end, a human voice personalizes Ewaso Ng’iro and tells us how it feels because of all the blows that are inflicted on it and what its fears are.

Let’s all walk and work together to save Ewaso Ng’iro!

Back to Vol. 9 | Read the Table of Contents |  Back to IYSC | Like Our Stories? Please Donate! 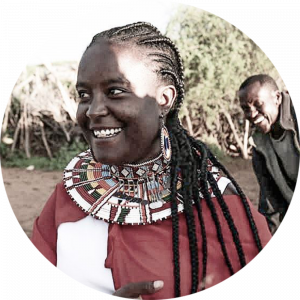 Laissa Malih is a Laikipian Maasai and the first female filmmaker in her community, with an interest in documenting, linking, and amplifying the voices of youth and women across diverse Indigenous cultures in Kenya and worldwide. Read more from Laissa Malih.