Salmon and the Poetics of Place 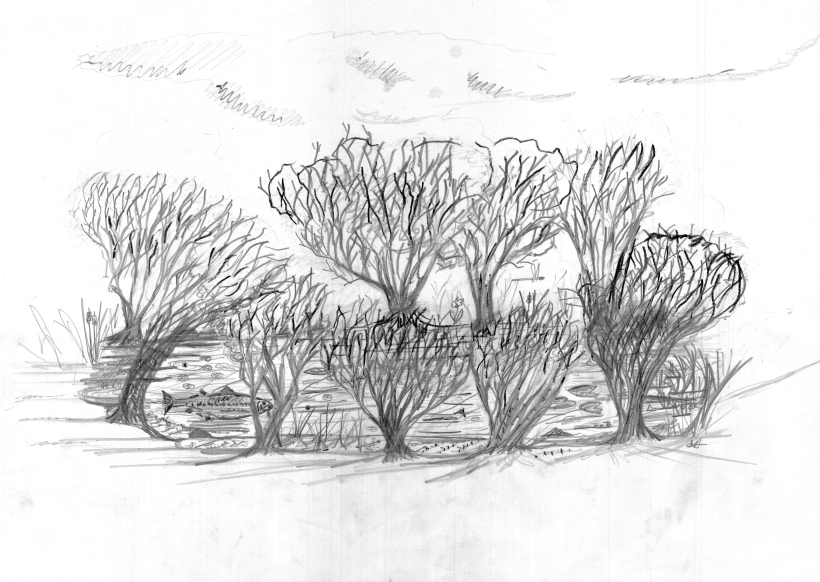 Salmon gain their wisdom by eating the nuts that fall from nine hazel trees around a pool in the otherworld. Artwork: Emily Haggan, 2015

The Salmon of Science

Rivers and streams carry nutrients and young salmon to the Pacific Ocean. Returning salmon spawn and die, contributing thousands of tonnes of nitrogen, phosphorus, and carbon to freshwater and forest ecosystems. The size of past salmon runs is reflected in the growth rings of riverside trees. At least two hundred creatures, from people to bears to insects, transport nutrients into the forest. Marine and terrestrial nitrogen are different isotopes (15N vs 14N), so it is possible to trace the influence of salmon runs as far as one kilometer from the water’s edge.

The scientific detective story that showed the relationship between salmon, cedars, and wildlife has a much earlier and more eloquent telling in the First Salmon Ceremony celebrated throughout the Pacific Northwest. Spring is a hungry time, so people watch eagerly for the first salmon to return, but in fact the ceremony doesn’t take place until knowledge-holders declare that sufficient numbers of these fish have reached the spawning beds. A welcome feast is then held where salmon are eaten and the remains respectfully returned to the river. If all is done properly, the spirit of the salmon will travel downriver to tell the rest of the salmon people that they were well treated, thus ensuring their return the following year. The First Salmon Ceremony is reminiscent of the Irish story about the Salmon of Knowledge.

The Salmon of Knowledge

This is a story of the boyhood of the Irish hero Finn McCumhaill (pronounced “McCool”) and the Salmon of Knowledge, An Bradán Feasa. The Hazel tree is the first thing to come into creation. Nine hazels surround a pool in the otherworld. The Salmon became wise by eating the nuts that fell into the pool.

A scholar fished in vain for seven years before he finally caught the Salmon. He set it to roast over a fire, but was overtaken by an urgent call of nature. Just then, young Finn happened along the riverbank, so the scholar called out: “Here! Young fella! Mind that fish for me that it not burn!” and ran for the trees. Finn watched the fish. Thinking it was done on one side, he turned it over, but in so doing he burned his thumb. He put his sore thumb in his mouth and along with it a piece of the Salmon’s skin. Returning from the woods, the scholar saw the light in Finn’s eyes and, with philosophical resignation, allowed him to eat the rest of the fish. Ever after, when Finn was losing at chess or in battle or when enmeshed in sorcery, he only had to chew on his thumb to prevail or escape.

The riverside tree in this image can be many things: timber for industry; inspiration for the Buddha or Isaac Newton; Lao Tzu’s riff on the usefulness of the useless; or a relative to Indigenous people. The tiny roots that draw water and nutrients from bedrock might signify individual connection to the ground of being, the ecological or collective unconscious. The roots converge in families, societies, Aboriginal spiritualities, religions, art, natural and social science, and the humanities. The salmon sheltering under the roots is an avatar for the flow of knowledge between ocean, rivers, plants, and animals in Aboriginal ceremony, Irish tradition, and the scientific story of marine nitrogen.

As a symbol, the tree welcomes different ways of understanding and being in the world without privileging one over another. The trunk is the conversation. The branches are the products of our work. The tree symbol can be read at many levels. The tree and its creatures as beings in their own right. The connections beloved of the ecological, climate, and economic modelers in the Millennium Ecosystem Assessment. The spaces between the connections where unseen fauna and flora flourish. The flows of air and water that nourish and support but defy notions of individual agency. The resonant voices of wind and water, animals and people. The dance of waves and branches that inspires music, song, and ceremony. The visible sunlight that feeds the tree. The invisible Internet that carries the voices of loggers, conservation organizations, and our project; the fungal “internet” that connects forest trees. Some of these elements are quantifiable; more are not. 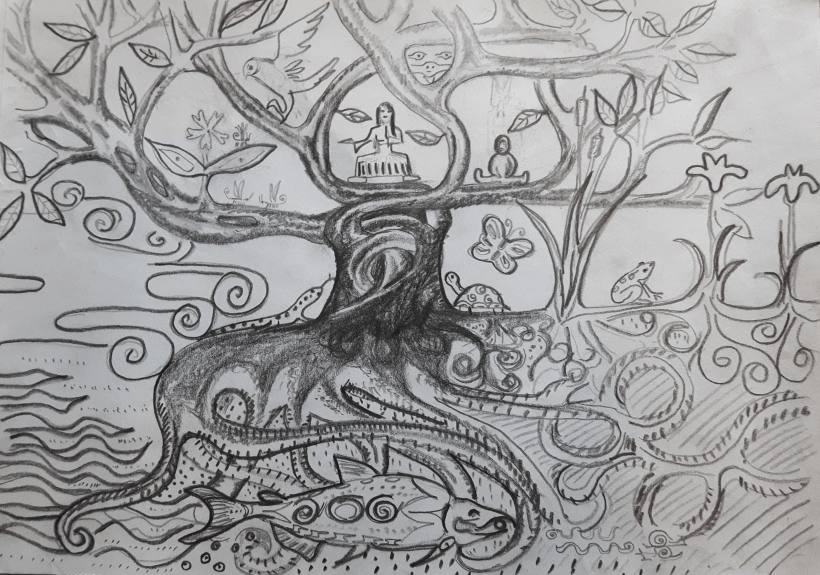 The roots of the riverside tree shelter the Salmon of Knowledge and suggest converging ways of understanding the world. Artwork: Emily Haggan, 2016

Originally published as part of: